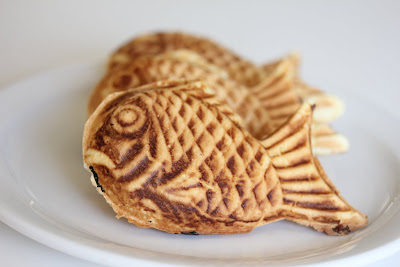 A few weeks ago, I somehow stumbled across a website, where someone was talking about making their own taiyakis, which are a japanese pancake-type snack shaped like fish and usually containing a sweet filling in the middle. I didn't even know it was possible to get your own taiyaki maker!

So on my next shopping trip, I was on the lookout for a taiyaki maker, and sure enough, I found it at the Marukai Living. Of course, once I bought the maker, I had to figure out how to use it. I found a couple websites that offered taiyaki recipes and instructions on how to cook with your taiyaki maker. 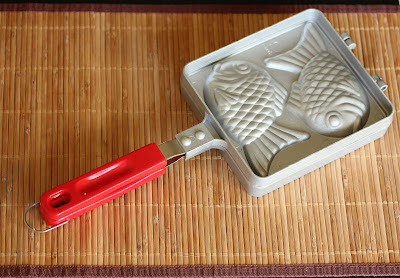 I enjoy taiyakis because  they are fish shaped. You can buy ready made frozen ones at japanese markets, but they never taste as good as the ones that come out piping hot from the vendors. I've seen the taiyakis filled with red bean paste, chocolate and custard. I thought it would be fun to add nutella in mine. 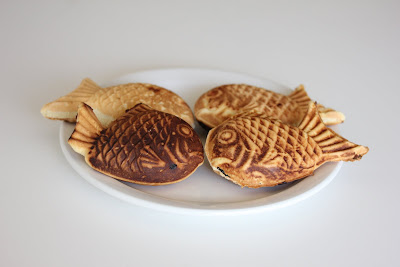 I chose to use a recipe I found at The Anime Blog because it gave such detailed instructions on how to make the taiyaki using your own taiyaki maker. It ended up being kind of tricky. Our first batch burned. Some of ours had too much batter, some too little. Sometimes the nutella leaked through the pancake.

To use the taiyaki maker, you put it on your stove, as it has no independent heat source. You spoon some batter in and some filling and then you close up your taiyaki maker. You let it sit for about a minute and then you need to flip it so that it cooks evenly on both sides. 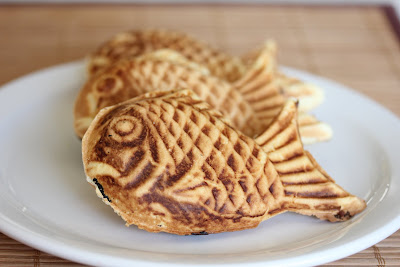 I found that this batter didn't taste that much like the one I'm used to. I don't know if we overmixed the batter though because we weren't sure if we were supposed to use a mixer or not. It felt tough..I didn't have too much time to fiddle with this first attempt.  I'm going to try out some other batter recipes and play around with this a little.  I might also try using some pancake mixes because I've read that they
work well. I also hope to use my taiyaki maker to make other cool looking snacks.

12 comments on “Taiyaki with nutella”