The Real Cronut from Dominique Ansel (via Goldbely) 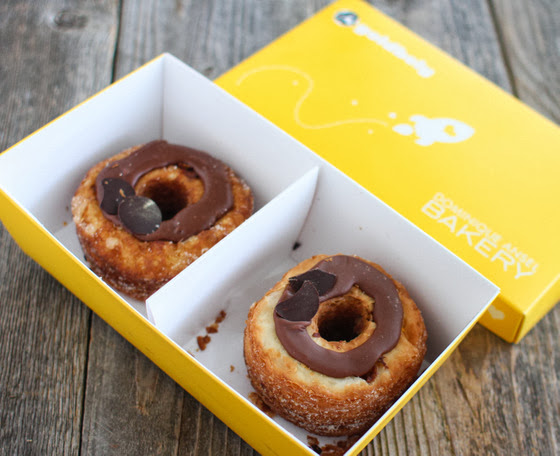 When I made the decision this past Fall to not wait in the 3+ hour line for the famous Cronut™ at Dominique Ansel Bakery, I didn’t think I would get a chance to taste the Cronut™ until another visit to NYC.

However, I got my chance earlier this week. For the past seven months, Goldbely, an online retailer that ships gourmet goods, has been working with Dominique Ansel to find a way to ship his Cronut™ nationwide without sacrificing on the taste. After various trials with the recipe and packaging, they finally found a way to make it happen. This past weekend was their first trial run (and the first time Dominique Ansel’s Cronuts™ have ever been officially shipped), where Goldbely offered a limited number of Cronuts™ for purchase. To sweeten the deal, Goldbely was covering the cost of overnight shipping, so customers only had to pay the price of the Cronut™ ($5 each), which is the same price if you were to buy it at the bakery.

As you can imagine, once word got out of this flash sale, people swarmed the Goldbely website and for many, getting the Cronut™ via Goldbely ended up being harder than waiting in a three hour line. I got extremely lucky and managed to snag one of the coveted orders. I’ll explain more in detail about my Goldbely experience near the end of this post, but right now I want to talk about the Cronut™! 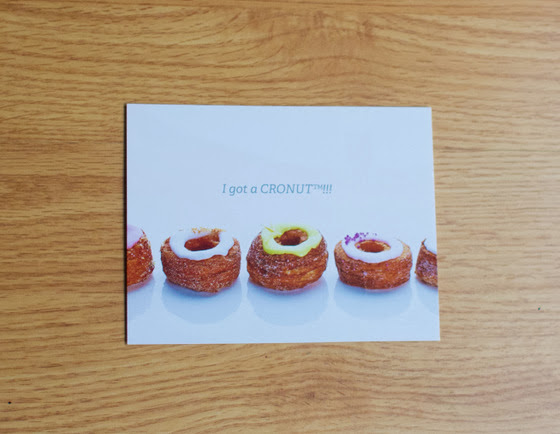 As promised, the Cronuts™ were overnighted via Fedex. They arrived in a giant box, with an inner box packed with dry ice, and then a smaller box containing the frozen Cronuts™. One thing I noticed was that there was no padding for the actual Cronuts™, and as a result they got tossed around a little in the box, so the chocolate discs on mine broke. I hope in the future, they pad the individual Cronuts™ so that they can’t shift around during shipping. Other than that though, my Cronuts™ arrived in good condition. There was a very detailed instruction sheet on how to handle the Cronuts™. 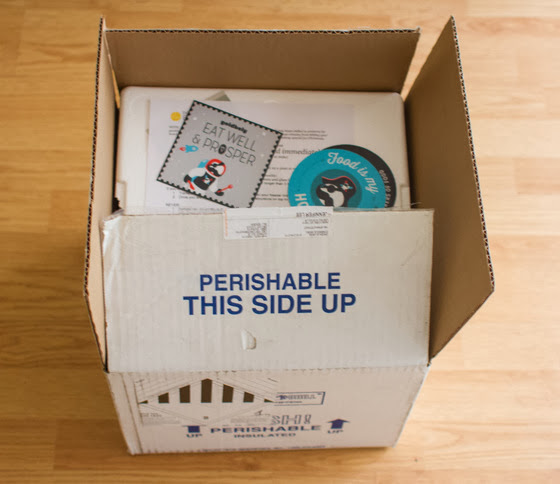 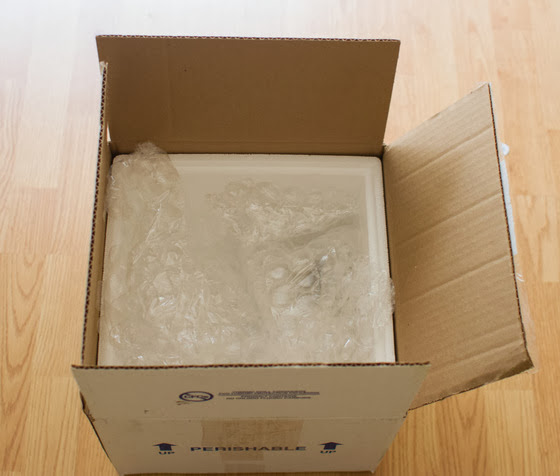 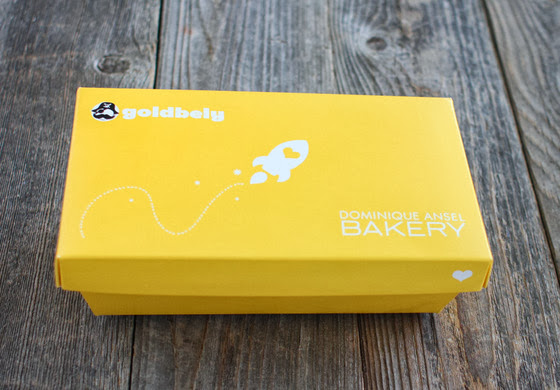 Dominique Ansel rotates different flavors every month and the flavor of this month is Valrhona Chocolate Champagne with fresh orange zest sugar.

You are not supposed to reheat them, place them in the oven, refreeze after thawing, etc. You were just supposed to let them defrost for about 2 hours and then eat them. I was really surprised that this would work, but it did. When I went to cut a piece out of my first Cronut™, I heard the satisfying crunch of flaky fried layers, which was a really good sign. 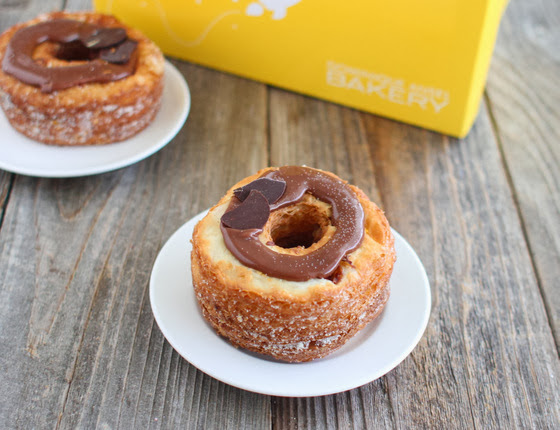 So did the Cronuts™ live up to the hype? 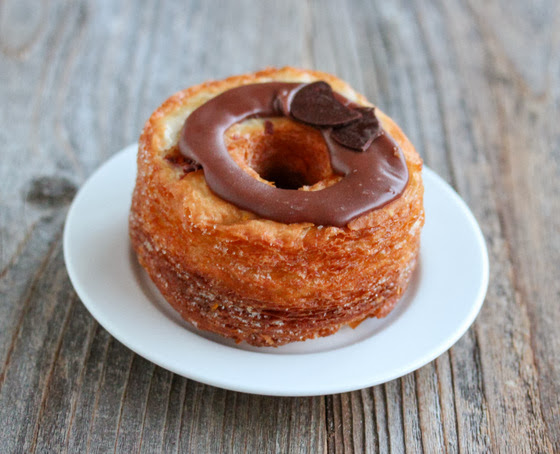 Yes, a thousand times yes!!! While I wouldn’t wait three hours for one (but then I wouldn’t do that for any food item), the real Cronut™ was far better than any copycat croissant-doughtnut hybrid I’ve tasted, and I’ve tried quite a few. As Mr. K described it, it is like combining all the characteristics we’ve liked from various copycats and actually putting them all together and doing it better. 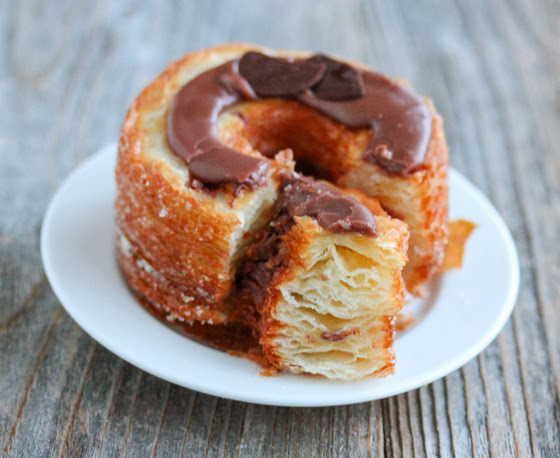 I was a little worried about trying the Cronuts™. I loved my visit to Dominique Ansel’s bakery this Fall and I was afraid I might be disappointed by the Cronut™ and it would tarnish my memory of the bakery, but these Cronuts™ were really good. I can’t even imagine them getting better, but the fresh-from-the-bakery version is supposed to be a tad better. My favorite pastry from Dominique Ansel is still his Kouign Amann but the Cronut™ is a close second. I’ve had a really hard time even finishing an entire copycat croissant doughnut from the various bakeries in San Diego, but I had no trouble finishing the real Cronut™. And it was really really hard to share them with Mr. K. I cried a little inside every time I watched him take a giant bite. 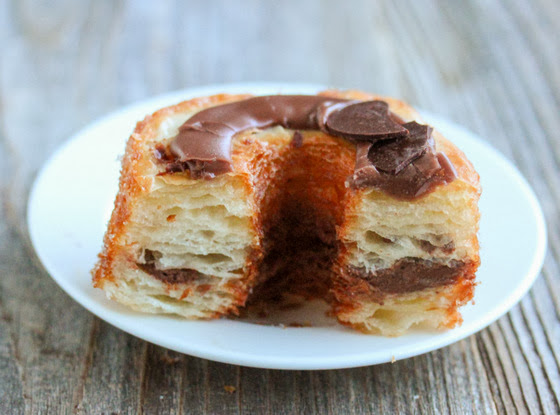 So what makes Dominique Ansel’s Cronut™ so special?

The Crunch: Despite the fact that these were frozen, once defrosted and without needing to reheat, the layers were super crispy, like the Cronut™ had just come straight out of the fryer. It was quite amazing and the Cronut™ was crunchier than most of the croissant doughnuts I’ve tried.

The Layers: The first thing I look for when I come across a croissant-doughnut are the layers. Some versions I’ve had, the layers aren’t developed and are all mushed together. The Cronut™ had an insane amount of layers, about double the amount of the next closest I’ve seen. Not only can you see lots of defined layers, but within each of those layers, many of them had additional delicate thin layers that I couldn’t clearly capture on my camera. I was really impressed with the amount of layers Dominique Ansel was able to achieve on the Cronut™.

All the layers were light and flaky. And they still maintained a moistness, unlike the very dry copycats I’ve tasted. The Pastry Filling: Most copycats leave out the pastry cream, but it makes a big difference. Without it, most versions I’ve had just taste like a fried croissant, cut into a doughnut shape. The pastry filling elevates the experience, making it much more unique tasting and harder to liken to a specific existing pastry other than a Cronut™. It’s no longer just a croissant shaped like a donut. Since this was the chocolate Cronut™, it had a piping of chocolate ganache. The piping was a little uneven. Some parts of the Cronut™ had more and some barely had any, but it was still delicious.

The Dough Flavor: People call it a croissant-doughnut hybrid and I think one of the big mistakes of some of the copycat recipes is that they simple use a croissant recipe. But even though the Cronut™ has layers like a croissant, the flavor is not quite the same. It’s not as buttery, it’s fried in grapeseed oil, and there are more layers than in a croissant.

All in all, we really savored and enjoyed our Cronut™ experience.

So a little more about my experience with Goldbely’s flash sale.

I learned of the sale Friday evening when I was going through my email. I am subscribed to Goldbely’s mailing list and was shocked when I read their announcement for a flash sale of Cronuts™. I immediately did some research and confirmed it was real. Then I got on my computer and began reading Goldbely’s twitter account. The way the sale worked is once you enter the sale, you’re in line. No need to refresh the website, which was nice.

About every hour, Goldbley would release some orders of Cronuts™. It could be anywhere between 2 and 50 at a time. On twitter, they would announce a time for the next release, so that customers didn’t have to sit at their computer screens for hours on end and could actually take breaks. When the Cronuts™ became available, the waiting line screen would change and a yellow button would appear.

The yellow button never lasted long and just because you see it and clicked on it as fast as possible didn’t mean you would get it because there were thousands of other people doing the exact same thing. Mr. K came home only a few minutes before I was gearing up for my first try. Instead of my usual friendly greeting, I told him to immediately get on his computer to try to get  a Cronut™. He was, understandably confused, but he got with the program.

We saw that yellow button and clicked, only to be hit with the screen that we were too late and to get back in line. With each release, it seemed like our chances were getting even slimmer. While I had managed to click on the button the first time, with subsequent releases, the button didn’t even appear on the screen long enough for me to register it and click on it. Fortunately for us, Goldbely was operating on East Coast time, so they decided to call it quits for the night around 9pm, meaning I still had most of my evening free since it was only 6pm on the West Coast. Mr. K talked about writing a book on what it’s like to be married to a food blogger.

After a few tries I had given up. I didn’t think I had any chance of getting it since I was essentially competing against a nation of Cronut lovers all vying for those limited orders. I consoled myself with the fact that at least now there was a way to ship the Cronuts and I could eventually get one in the future. The next morning, I was waiting for Mr. K to get ready, and the first release of the day was coming, so I figured I’d give it one more try…

And I got it! I couldn’t believe it. I don’t even know how I did it. One minute I see the “Sorry you missed this batch” and the next second my screen changed to the purchase screen to enter my shipping address. My hands were shaking as I entered all my information in. And then I was taken to the success screen where I could tweet a message that I had gotten a Cronut. After my tweet went out, Dominique Ansel (or whoever handles his Twitter account) favorited my Tweet.

I know a lot of people were really frustrated by the experience, especially when they didn’t get one after hours or maybe days of trying, and I know how lucky I was to get it. I thought Goldbely did a good job though of responding to people’s concerns and questions all weekend long. My only critique is that they should pad the individual Cronuts™ so that they don’t shift during shipping. And while it was definitely really really hard to get an order, it wasn’t impossible. I got an order. My brother in Boston also managed to get it (and he generously shipped it to his long distance girlfriend in Los Angeles so he didn’t even get to try it himself!)

Goldbely plans on doing it again in the future and hopefully, eventually, everyone who wants one will be able to get it. I’m happy they’ve now found a way to make it more widely available nationwide, so people don’t have to wait for a trip to NYC to taste the famed Cronut™.

20 comments on “The Real Cronut from Dominique Ansel (via Goldbely)”