Yes, my family went to Tomi Buffet twice over the holidays. You can read about the first visit here. Sure there are tons of other restaurants around, but how many of them offer all you can eat fresh uni and giant clams and other goodies for less than $20 per person? 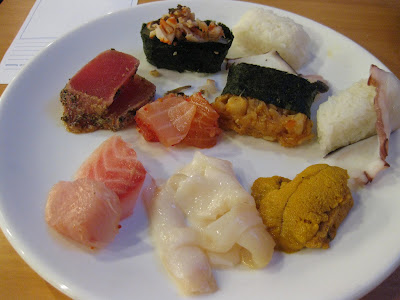 There were some changes on my second visit, so I thought I’d post about them.

The first thing we noticed on our second visit was that that word had gotten out about Tomi. For our first visit, the place was full but there was no line. Just a mere week later, despite arriving early, there was an hour wait and it was pretty much like that for the rest of the night.

My biggest worry was that they would be out of uni and giant clams. On my first visit, those most sought after items had been hidden and you had to request it from one of the sushi chefs working behind the glass. I was annoyed on my first visit that they tried to limit you to one order of each by claiming they had run out if you asked for it a second time.

However, on this visit, the uni and giant clams were on display. You still had to ask the sushi chef for it rather than being able to get it yourself, but everyone could see it so everyone was asking for it. Surprisingly, despite it being out in the open, there was uni for most of the night. They didn’t run out until after 8. The big clams did run out fairly quickly after we got there though.

An additional item I noticed on the sushi section of the restaurant that wasn’t available on my first visit was black caviar, which I really liked. One of the things I like about this place is that you can make special requests to the sushi chefs. So for example if you want caviar sushi, but you don’t want to eat rice, you can just ask for a scoop of caviar. 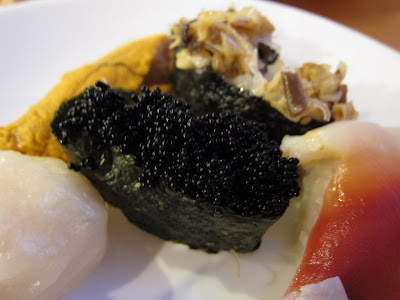 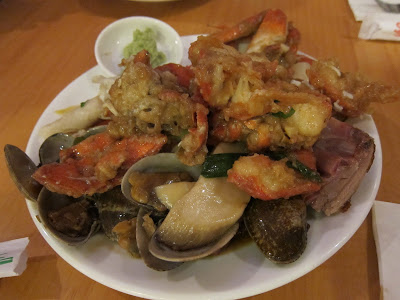 The big change in the dessert section were the additional ice cream flavors available. On our first visit there was only chocolate. On this visit, there was green tea, mango, vanilla and chocolate. 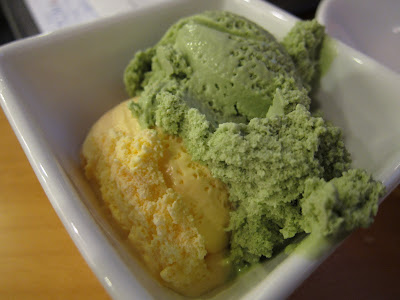 The ice creams all tasted really artificial, so I only got one scoop of each flavor.

One thing I found strange was that the item that was the most popular were the steamed mochi. People were waiting in line for 20-40 minutes for the plates of mochi to come out and only two platters came out at a time, and not very often. I liked the mochi but I didn’t think it was worth standing in line waiting for. They honestly didn’t taste very different from the frozen ones I buy and steam.

Luckily, we sat near the mochi station, so I was able to see when they came out with fresh mochi and got some without having to wait around forever, but I was so amazed that throughout the night people kept waiting in line for so long for the mochi to come out.

There was also more fruit on this visit, such as papaya, which I love. I didn’t take as many pictures as my previous visit, since the rest of the food was pretty much the same. You can read my first review for more pictures and a more thorough review. 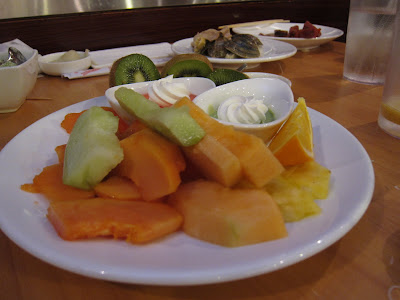 Here is a collage of the pictures I did take: 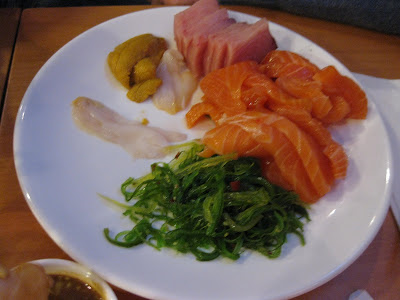 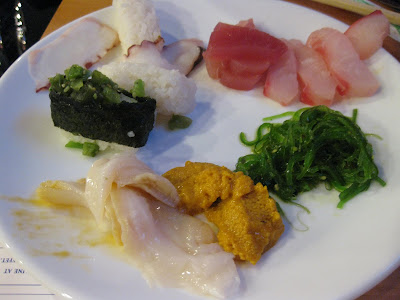 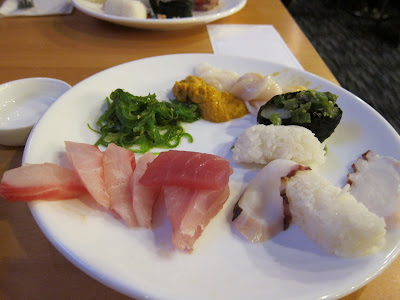 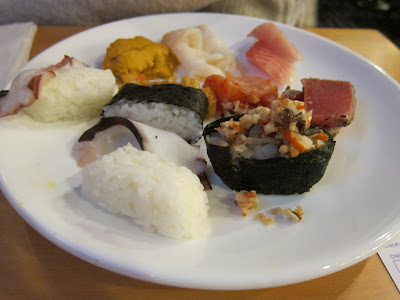 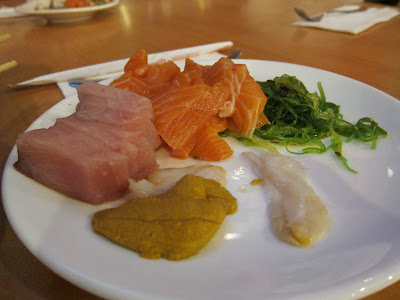 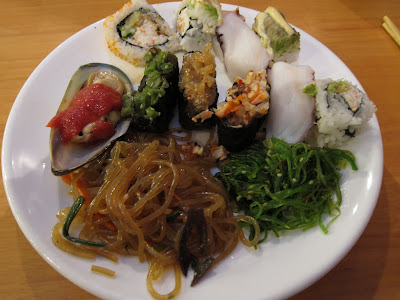 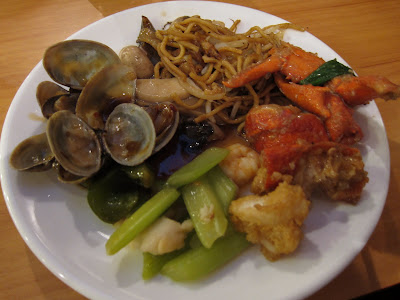 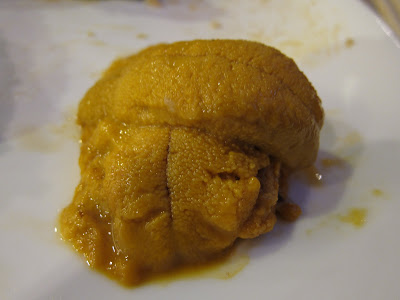 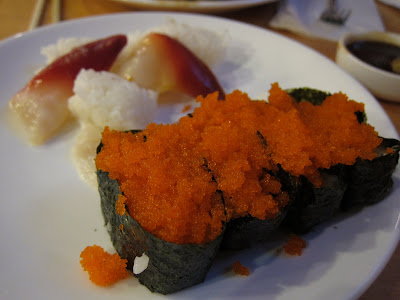 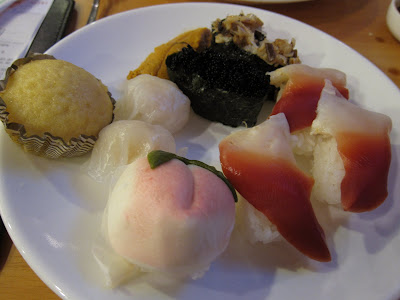 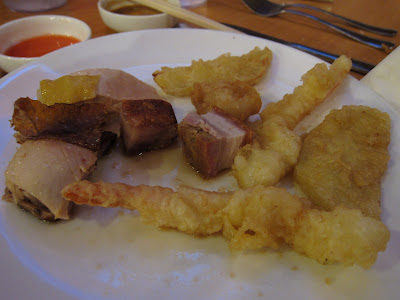 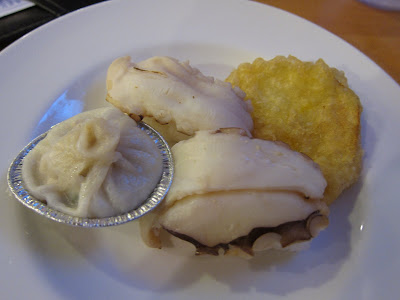 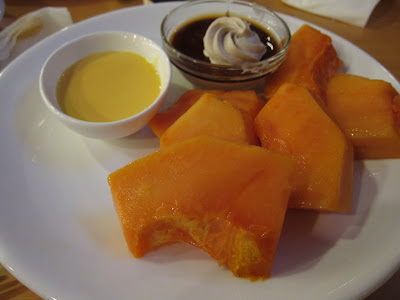 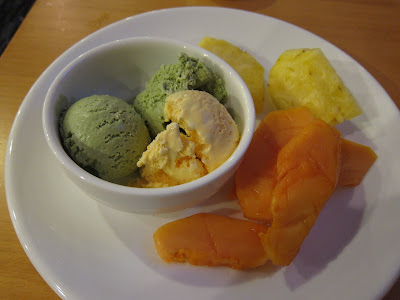 One other observation I found interesting is that there are quite a few customers here tend to be a lot more “pushy” then at other buffets. I remember when I was reading reviews for Kome, the sister restaurant of Tomi. A lot of reviews complained about people cutting in line. There were quite a few complaints about older asian woman who were cutting.  I rolled my eyes at the time, thinking that this is typical behavior that I’ve witnessed at asian buffets. But I was wrong. The line cutting is pretty extreme at Tomi. There are definitely quite a few people, who are downright rude and have no scruples of outright cutting in front of you after you’ve been waiting a long time for a popular dish. I’m pretty sure it’s the same people that I read about in the reviews.

Other than that though, things are pretty good. Hopefully Tomi will maintain its high quality sushi and food for a long time. It’s been so refreshing to get a buffet that actually serves good quality sushi.