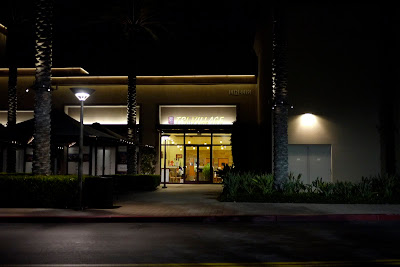 Over the weekend, Future Husband and I had some family obligations to attend to in LA. Since we would be done in the afternoon, I chose a place for us to eat dinner at in Orange County on our way home. After debating over some of our favorites, I recalled a post by Kirk of mmm-yoso regarding a delicious peking duck experience he had at Tri-Village in Irvine.

After some additional research, I chose it as our dining destination. It took a little convincing to get FH to agree because he’s not a fan of duck. He doesn’t like any gamey meats. However, what peking duck is known for (when made right), is an extremely crispy skin. The duck skin is then usually served in wraps, along with some hoisin sauce and green onions. Since the duck skin is carved apart from the meat, I thought that FH would be okay with eating this. I was able to sell it to him by comparing it to lechon (roasted pig often eaten by Filipinos which has a crispy skin), which he loves. Also, I had perused the rest of the menu and saw dumplings and noodle dishes he would like.

Despite all my research, I was unprepared for Tri-Village. First, instead of being located in one of the plazas in Irvine that are crowded with chinese restaurants, bakeries, and supermarkets, Tri-Village is located in a plaza with American businesses.

If you want the peking duck, you need to call and place the order two hours in advance. So when we arrived, they were expecting us. When we ordered the duck, the waiter asked what time we would be there. Then right as the clock hit our reservation time (we were running about 5 minutes behind), we got a phone call from the restaurant asking when they would be expecting us.

When we arrived, we were greeted by one of the waitresses, and then shown to a fairly big table despite the fact that there was only two of us. I think they gave us a big table since we had ordered the duck, and I was very appreciative of the gesture. I was already excited to be eating the duck and the waitress got me even more excited. She told us enthusiastically “First we’ll start with the duck!” before giving us a menu to see if there was anything else we wanted to order. We were also asked if we wanted the duck soup, which costs an additional $6.99. The duck soup, when made right, is very tasty and worth the additional cost, so we went ahead and got the soup.

Inside the restaurant, the staff was chinese. However, the menu offerings were definitely catered to “American chinese food.” Even the descriptions for the Peking duck and the more traditional chinese dishes had very American descriptions.

We were started off with some complimentary peanuts: 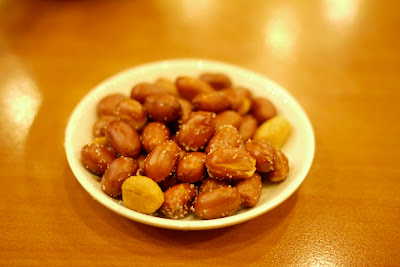 Since the two of us were sharing an entire duck, we didn’t want to order too much more.  We ended up choosing a stir fried knife shaved noodles and chive pockets.

Soon after, a server came out to show us the duck before going back and carving it. I was tempted to take a picture, but I didn’t want to whip out my camera and make her wait.

Then came out a beautifully plate of carved duck skin and meat. I also planned on taking a picture of this, but instead of putting it in front of us, she immediately began arranging the duck pieces into the wraps. I contemplated telling her we could do it ourselves, but she seemed to really want to do it. So we just watched. I thought she would just do a few to get us started. But she worked until the entire plate of duck was gone. So no pretty picture of the plate of carved duck. 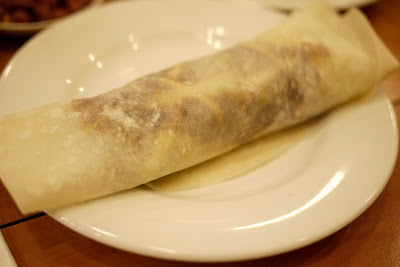 Once she finished, I quickly got out my camera and took some pictures by opening up my wraps. Each wrap had some skin, maybe a piece of meat, some green onions, and a slather of hoisin sauce. Both FH and I felt that there were too many onions in each wrap and it was taking away the taste of the duck skin. So after eating one, we began to remove onions from the rest. The server who had made the wraps glanced over a couple times, making me feel guilty for destroying her hard work. 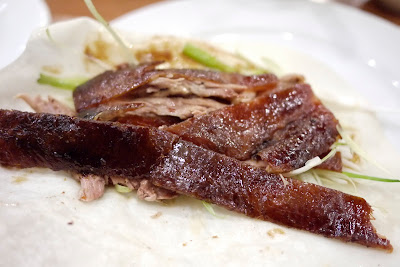 So how was the duck skin? Delicious. Very crispy, and not too fatty. It did appear that the skin was a little on the dark side and I worried it was burnt, but it didn’t taste burnt.

FH liked the duck skin too, though he didn’t think it was as good as lechon skin. (Of course an entire duck is $34.99, and an entire lechon, while much bigger, is also over $100) 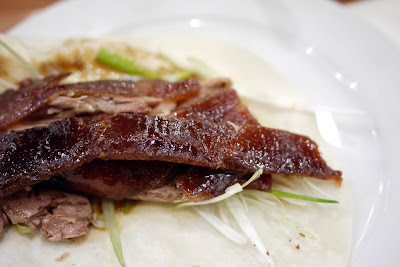 There wasn’t much meat on the duck, so most of the wraps were made up of duck skin only. The wraps themselves weren’t great though. They were quite dry. After the first one, the other wraps had begun to cool, which dried them out even more. I ended up just eating the duck skin by itself, further destroying the assembled work by the server.

During our meal, the service was outstanding. They kept coming over to change our plates despite the fact that we barely had any entrees, and they kept asking how the food was.

After getting the carved duck, we were given the duck soup. The duck soup is made with hours of simmering duck carcass, giving thebroth a rich taste. The soup here had tofu, napa cabbage and glass noodles, along with the remaining bones and meat from our duck. It was also slightly seasoned with some black pepper. 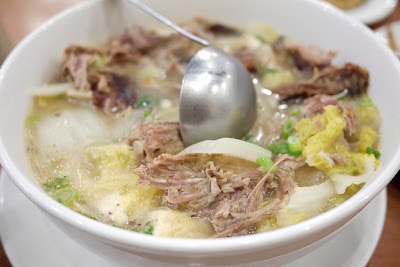 I was pretty happy with the broth here. Of course it could have been a little richer (more hours of simmering/stewing), but it was still pretty good. And I took home the remains to give it another simmer. FH also really loved the soup and usually he’s not a fan of these kind of soups.

Next came our knife shaved noodles. We ordered it combination style, which came with chicken, beef, and some vegetables. I was really disappointed with this dish. The noodles were dry and hard. They were the worst knife shaved noodles I had ever eaten. And the sauce was too salty. After about two bites, I couldn’t eat it anymore. FH didn’t like it either. 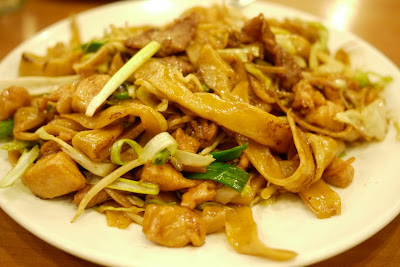 Finally, our chive pockets. After the noodles, I was worried. But these were decent. The filling was a little watery and felt too compact. It was one of those dishes that because I’ve eaten a lot of chive pockets, including some wonderful homemade ones from my grandma and my uncle, they didn’t impress me as much. But if I hadn’t had that much experience, these would be pretty good. 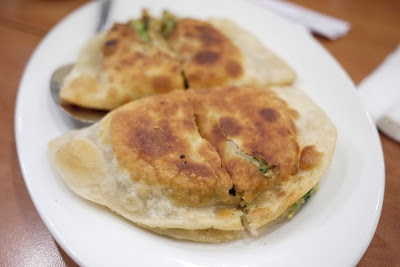 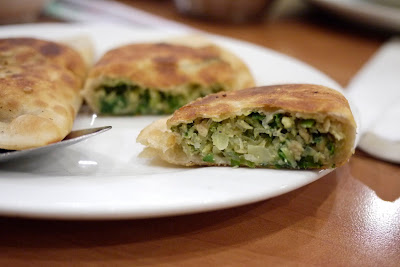 Overall, we had a lovely experience with the duck and the staff.  We weren’t too keen on the other dishes, but maybe there are some more on the menu that are better. I think another advantage of this place for non-chinese speakers is that they do speak English. A lot of places in Irvine, the staff automatically speaks chinese, making it intimidating for non-chinese speakers to dine there.