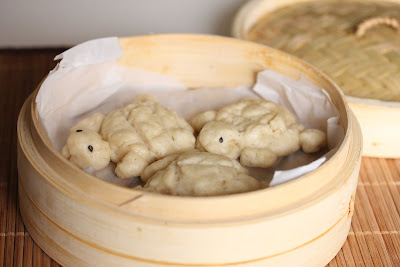 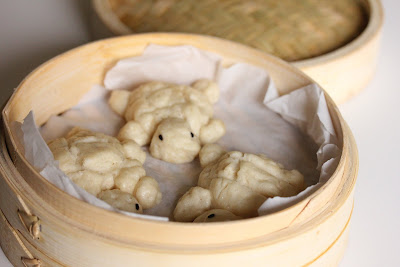 So last week, I tried to make them. And sure enough the biscuit dough, once steamed, does taste a lot like chinese steamed buns. I wasn't able to find any regular sized dough in my supermarket. Only the Pillsbury Grand.  My first set of biscuits were humongous after I steamed them. For my next set, I halved each biscuit to make more normal sized ones. We ate the buns with chinese sausages.

Since I already had pre-made dough, I thought it'd be fun to play around with it. I've always wanted to create cute shapes. Especially turtles. I love turtles. So I set out to make some turtle shaped buns. First, I divided each pre-cut biscuit dough in half because I bought the Pillsbury Grands, and each pre-cut dough is really enough for two normal sized chinese buns. 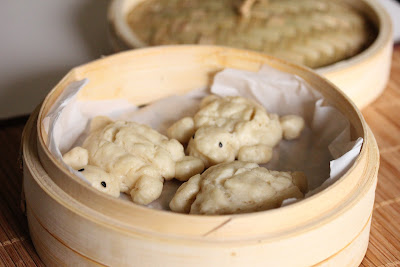 With each half piece of dough, I then took about 2/3 of it and use it for the turtle shell. The rest of the dough I used to form a head, the feet, and a pointy tale. I stuck black sesame seeds in for the eyes. And then I used a sharp knife to draw some crosses on the shell. I steamed them for ten minutes, and out came something that looked a bit like turtles. (I forgot to take pictures of my uncooked ones.)

I've experimented with a couple kinds of the pillsbury doughs. You can use flaky or not flaky, but not flaky is probably better if you want to play around with it. While chinese grocery stores sell frozen premade buns you can simply steam, pillsbury dough version is pretty interesting as well. The added buttery taste goes especially well with if you are going to serve it as a platform with meat slices. 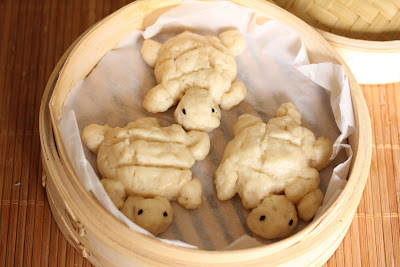