It's become a yearly tradition for me to visit the Universal Hilton for their weekend seafood buffet as one of my several birthday dinners.  So Boyfriend and I paid Universal Hilton a visit last month. You can read about my previous visit from last year here. 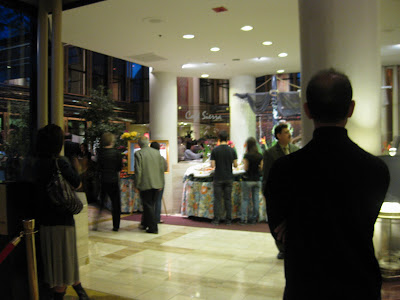 Cafe Sierra is a restaurant inside the Universal Hilton, which on weekends, offers a grand Vegas-style seafood buffet.  The buffet display pours into the lobby entrance way, which I always find interesting.  There's a lot of food, especially a lot of seafood. And I think the dishes are higher quality than a typical buffet. It's $42 per person, which I think is pretty reasonable considering all the food you get to choose from.

The service at Cafe Sierra is always good as well.  The staff is attentive and constantly fetching you drinks (sodas, juices and teas are complimentary), taking away your plates, and even getting you cotton candy from the kitchen.  Despite all the expensive goods laid out for your pleasure, the most sought after item is the cotton candy.  It comes out only a few times during the night and rarely makes it to the cotton candy stand, as the chef is overwhelmed by children grabbing these colorful clouds on a stick.

I opted not to try to sneak pictures of the buffet this year and just took pictures of the food Boyfriend and I got.  The hard economic times have obviously affected the Cafe Sierra buffet as well.  While the buffet is still pretty good, it's not nearly as amazing as it once was and some cheaper ingredients are definitely being used.

On one side of the restaurant is all the cooking stations, along with some other savory goods.  Boyfriend and I usually start here.  There is a station with prime rib, lamb and lobster.  Unlike chinese buffets that offer lobster and are always running out, here the lobster is plentiful. They also have an array of soups, some dim sum items, a huge variety of soft pretzels, breads, muffins (which I always want to try but never do because I'm trying to save room), rice, a handroll station, and one station that changes.  It's sometimes pasta, sometimes grilled kebabs.  On this night we went, it was tacos.

I always opt for some prime rib, lobster, sashimi and the seafood soup first.  The seafood soup has pieces of shark fin.  This used to be the highlight of my meal here. On this occasion the soup had changed. It wasn't nearly as good as before.  The seafood and sharkfin taste was less apparent and there were lots of chunks of meat. It's still tasty, but not nearly as good as it was before.  Boyfriend agreed. He used to drink about 4 bowls of this but that night he only had one. 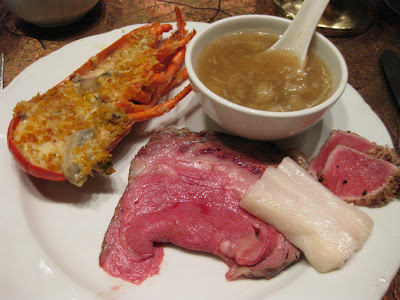 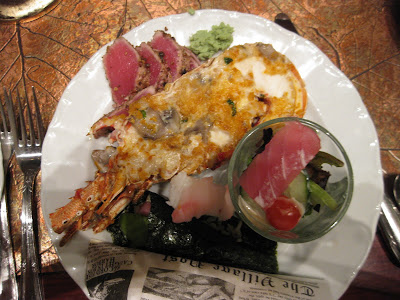 I also tried out the taco station. The tacos were made fresh and you had a choice of beef, fish or shrimp. The tacos were wrapped in newspaper. I opted for the shrimp one. The shrimp were plump and juicy and well seasoned. 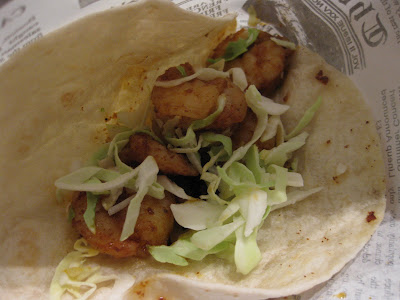 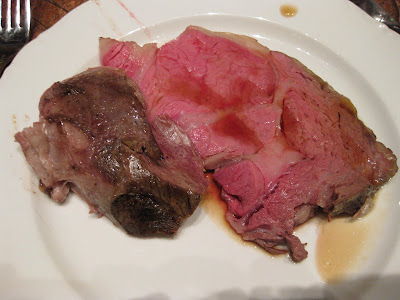 As you make your way toward the entrance of the restaurant you'll find a big display of sushi rolls, nigiri and sashimi.  To the right of the entrance is your cold seafood display.  Mountains of presliced king crab legs, snow crab legs and shrimp cocktail await.

I used to love the king crab legs. I love how they are already sliced open making them easy to eat. On this occasion, they were way too salty. So I didn't eat many. 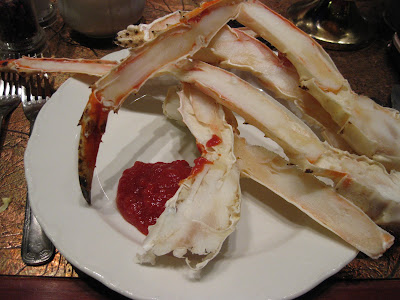 At the entrance of the restaurant there is also a tower of fruits, the offerings change depending on what is in season.  Most guests will grab a couple of fruits as they leave the restaurant.

After you enter the restaurant, there are a few more display stations.  In the middle section, there are various cold seafood salads like clam salad, octopus salad, scallop salad.  There are also some cooked items like ribs, paella, and one of my favorites: creamed corn. I know creamed corn is a simple dish, but I love the version made by Cafe Sierra. Almost as good as the famous creamed corn at Lawry's in Beverly Hills. 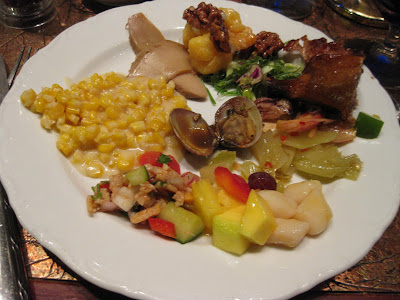 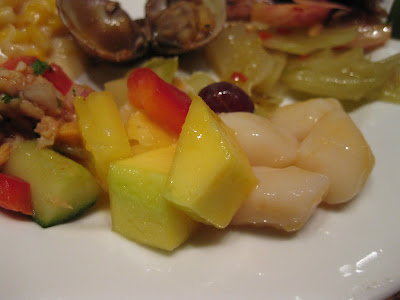 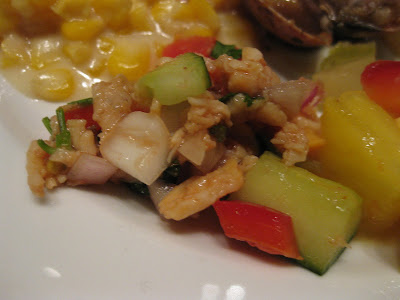 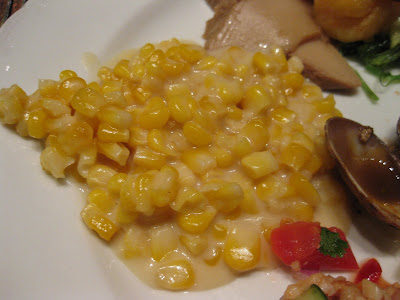 Then there is another table that seems to be a little bit of everything that didn't quite fit at the other stations. You'll find grilled vegetables, peking duck, walnut shrimp, desserts like creme brulee and bread pudding, and some fresh fruit. 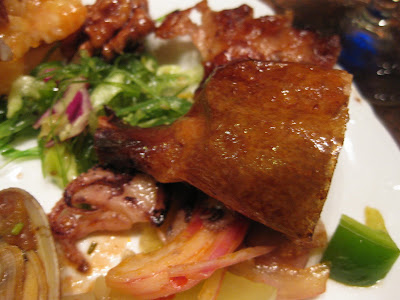 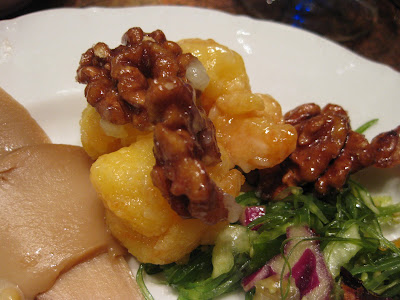 The walnut shrimp dish is really good. I've had this dish at other buffets and it's super mayonnaisy and not tasty at all. The version here is as good as ordering it at a nice chinese restaurant.

At the back of the restaurant is the dessert area.  Here is where the cotton candy is displayed (though it's almost always empty.  You have to be on the lookout for it and get it as soon as it comes out, or ask your waiter if they can get you one from the kitchen.) They have soft served ice cream, some icy drinks.  They have a huge display of various little cakes and puddings.  There are fresh baked cookies.  And there are two huge chocolate fountains.  I really enjoy the consistency of these fountains.  I've been to other buffets where the chocolate fountains don't run smoothly or the chocolate never solidifies after you dip the food.  Here the chocolate runs smoothly when you dip your food, and then quickly turns to a solid layer once the food hits your plate.  There are strawberries, marshmallows, melon and some other goodies for dipping.  There is also a small little freezer that carries ice cream bars and little cups of haagen daz ice cream. I don't know why, but this ice cream freezer is so appealing. I can never resist getting a drumstick or another Nestle creation and some ice cream. 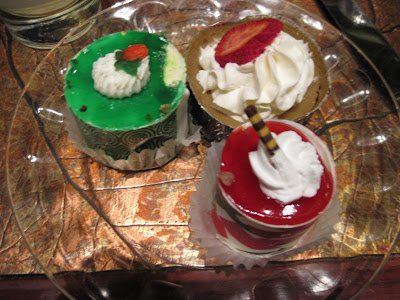 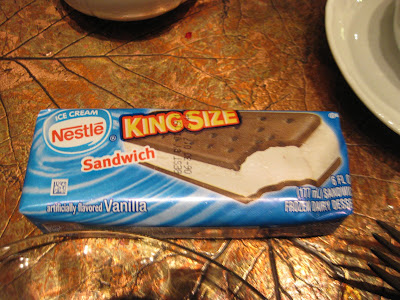 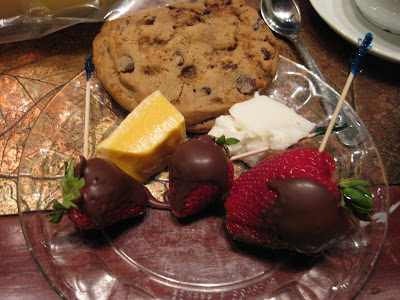 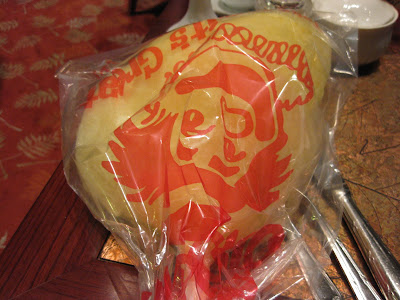 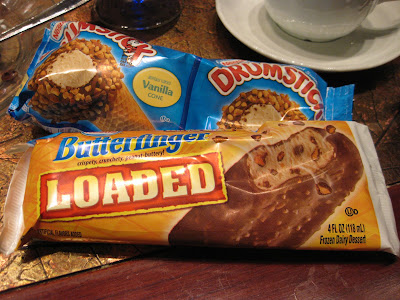 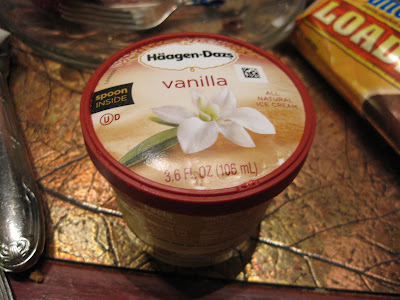 Boyfriend and I left ridiculously full as always. While we're sad that the quality of ingredients is not as great as before, this is still a pretty great place to dine.  It's our favorite buffet in California and I think the quality of the dishes is better than a lot of the higher end Vegas buffets.