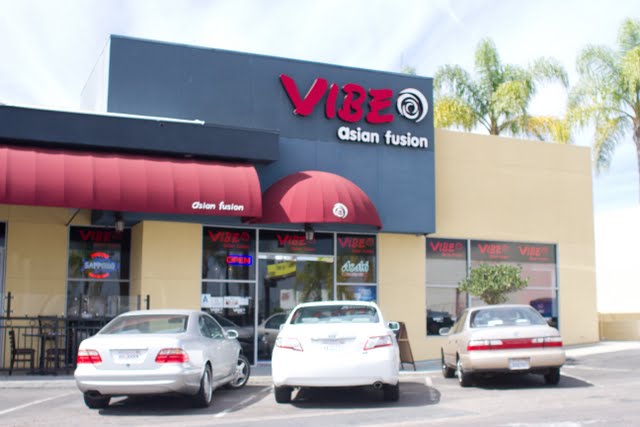 Vibe is a fairly new Korean fusion restaurant and sister restaurant to the popular Manna BBQ. Unlike Manna, Vibe is not nearly as popular and hidden away in a small plaza around the corner from Manna.

We decided to try it out a few weeks ago, not going in with very high expectations. The restaurant was nearly deserted during lunchtime.

After perusing the menu, we actually found quite a few items were wanted to try. After much discussion, we finally narrowed our choices down to a few options. 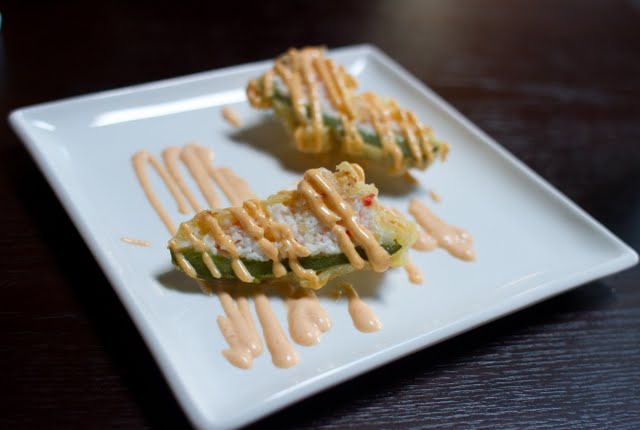 First, we were served some complimentary crab stuffed jalapeno poppers. These were tasty though the poppers packed quite a bit of heat. A little too much heat to start off my lunch. 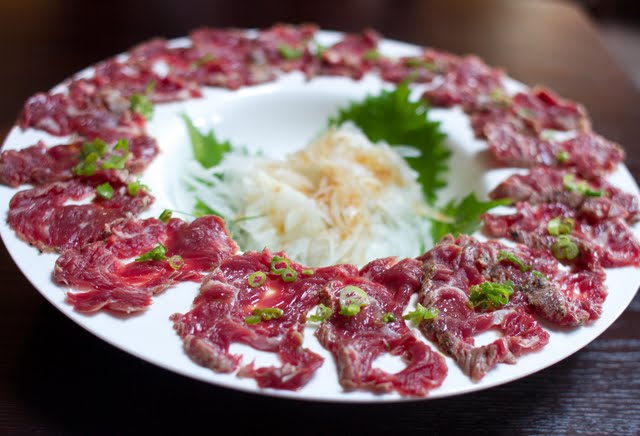 DH and I are both lovers of beef tataki. We were impressed with the generous portion size given the mere $9 price. This was definitely enough for us to get our fill without fighting over the last bite. My one complaint was that the ponzu sauce was a little too light and some of the pieces of meat were a little bit flavorless. I had to add quite a few pieces of onion to give them a little flavor. 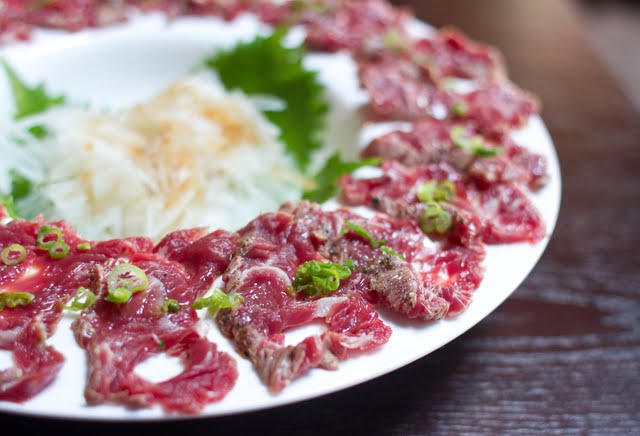 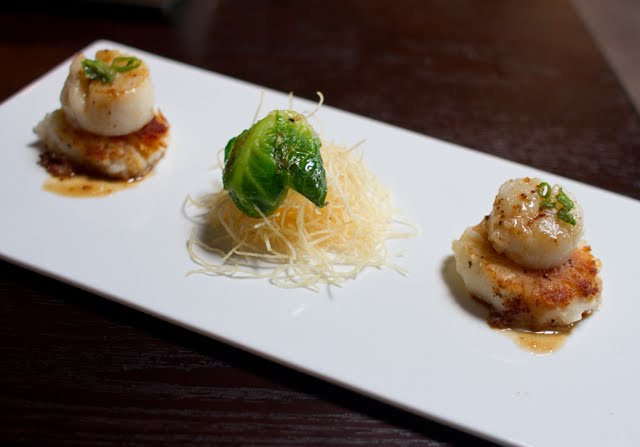 We really enjoyed this appetizer as well but found the $12 price a little high considering there were only two scallops. 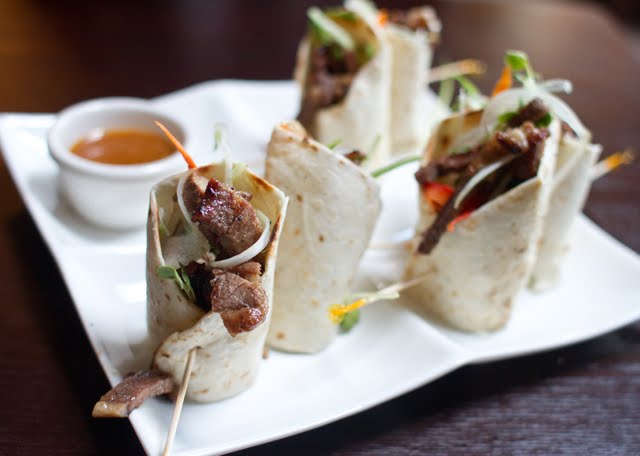 I enjoyed the presentation. I wish they had trimmed off some of the fat chunks of the meat though. This was probably my least favorite just because there were such fatty strips of meat. 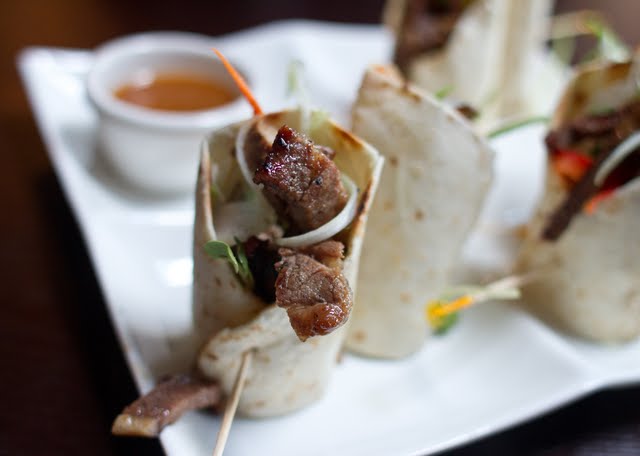 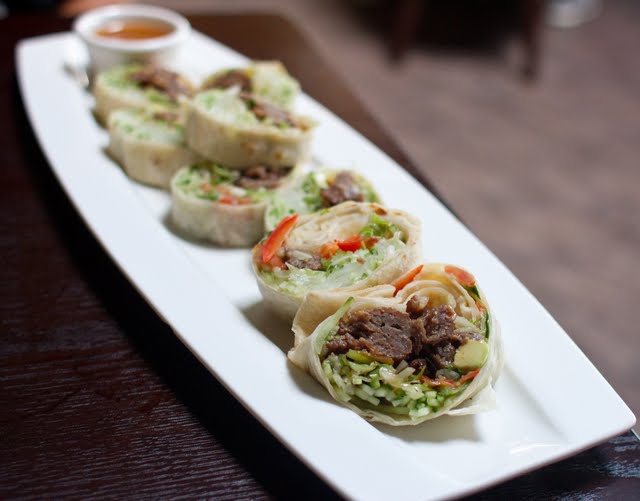 We both really enjoyed this. Despite its sweet marinade, beef bulgogi seems to go wonderfully with the traditional burrito toppings.  My one issue was that there was too much raw veggies.

One aspect I really enjoyed about the restaurant was that after each dish, the server asked us what we thought and specifically asked for critiques on how to improve it. It went beyond the automatic inquiry, as they really seemed to care about what we really thought and how things could be improved, so I did end up going into more detail of what I liked and disliked about each dish.

The decor was also quite interesting, with the lampposts inside the restaurant. 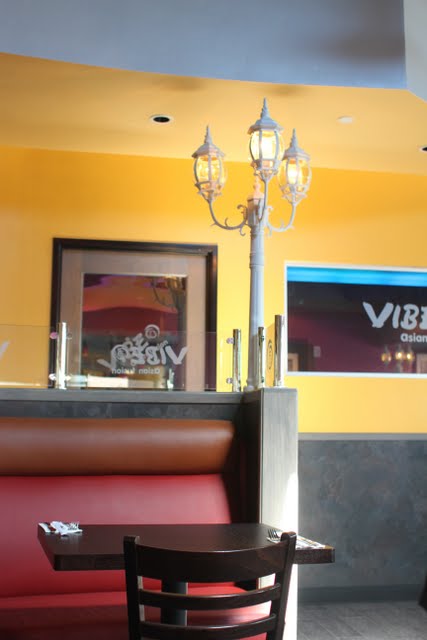 We were pleasantly surprised with our visit. We found the prices for the most part to be reasonable, the portion sizes pretty generous, and the service very friendly. We’ll definitely be back to explore more of the menu. Out of all the Korean fusion restaurants that have recently popped up, this one has been my favorite out of the ones I’ve tried.