I had always intended on writing a post recommending the vendors I really enjoyed working with for other brides in Southern California (we used vendors in both SD and LA) but it’s been over a year since my wedding and I’m only now finally forcing myself to get this post up.

During my wedding planning, one of my biggest concerns was finding vendors I could trust and not screw up on me like some of the horror stories I’ve seen happen. So, here is my list of recommendations:

Photographer: Jean Fang (please email me if you want her contact info)

We hired Jean to do our wedding photography and we could not have been more pleased with our choice. First of all, her rates were cheaper than any other place we inquired into. Jean also works for a large studio in OC and then does independent shoots are her own on weekends. This means you get a photographer who has the experience from a big studio but without their expensive rates.

What we also loved about Jean is that she does a “shoot and burn” style, meaning she shoots, she edits, and then she burns you a CD with all the photos. No having to pay her inflated rates for each photo you wan printed, or having to pay for each copy your guest wants. All the photos belong to you and you can make as many copies as you want, find a good deal and get them printed somewhere cheap, etc.

Jean is located in LA so if you’re wedding is in San Diego, you will have to pay a travel charge, but she was still cheaper than most of the photographers in SD.

We’ve seen wedding photographers who goof off, disappear, etc, during a wedding, but Jean captured everything. She was the hardest working person at our wedding and I was so worried during the night because she wasn’t eating even though we had arranged food for her!

We got our photos within a month and were very pleased with the results. She edited them all, but also allows retouching of an additional 10% with no extra charge.

I will disclose that we knew Jean from college. She is a good friend of our close friend, so we would see her at some parties. I am not endorsing her just because we knew her prior though. Mr. K and I were just really pleased with her work and her rates even without a “friend” discount were better than most. 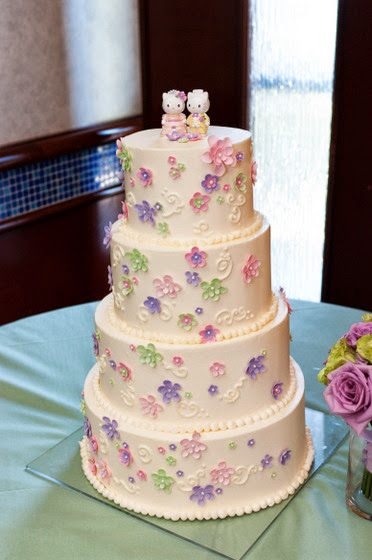 I did an entire post about our wedding cake which you can read here, so I’ll keep this short. We’ve worked with Jenny for several special occasions and have always been happy with the cakes she provides. Her cakes are made from scratch and use fresh ingredients. They taste good and she has reasonable rates. We always recommend her to friends and family.

I’ve had a few people ask me whether a videographer is necessary. It often is something that gets “cut” and we went through the same decision making dilemma.

I originally didn’t think we needed one but I was convinced after talking to some friends and I’m glad we did it. The wedding day was such blur and I honestly couldn’t remember most of it. Having the video to look at later was so much fun. I also think that the videographer captures different perspective of your wedding that the photographer can’t quite capture. Most of the photos are staged poses. Poses with you friends, family, etc. The videographer captures all the moving parts of your wedding (Walk down the aisle, dance, speeches; etc) as well as the behind-the-scenes stuff like what your guests are doing during the reception, etc.

We went to a big wedding convention of vendors to shop for a videographer and were surprised by the high prices and very poor quality of video. We had just about given up on a videographer when I saw the short instant wedding video done by VideoKeepsakes for a blog couple  I knew.

I was impressed with the video and the reasonable rates for the very large operation. They have many packages available and we went with a pretty basic one: one photographer, 8 hours, edited video which includes a 5 minute highlight video. We loved our video, especially the highlight reel which really did summarize the wedding perfectly and it was great being able to relive the moments again and again. 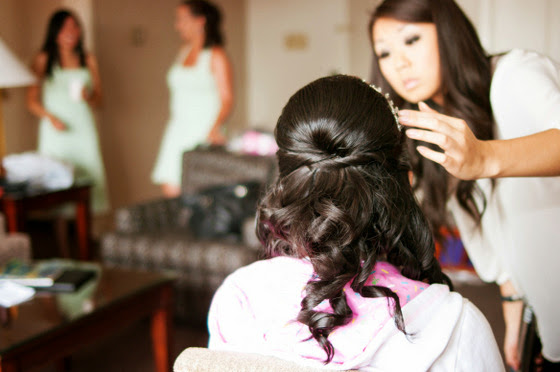 Hair & make-up was one of those categories where I was willing to spend a little extra on. I wanted to look my best (duh) and I knew I couldn’t do it as well as a good professional. Having an Asian face made it hard for me to find a good make-up artist in San Diego. I found most places to be too heavy handed and the make-up did not look flattering. I then broadened my horizons and searched in OC and LA.

I found two highly rated studios in LA: Kelly Zhang and Susie Chhuor. Kelly Zhang apparently books up a year in advance so I couldn’t get a booking with her. (I did meet her later for another event and she was super nice and did a great job). Susie Chhuor had some artists available but not the senior ones which got the most recommendations. Susie, herself, is based at the SF branch. I met her at another wedding and thought she did an amazing job on my friend.

Then I found Karen. She actually trained at both Kelly and Susie’s studios so she has a very similar style. And since she has a smaller operation, she charges less and was still available.

I worried a little about how reliable she would be, but she was great. She responded to all my emails promptly and was early on my big day. She also did an amazing amazing job. With some of my makeup trials, I felt like I had to guide them through everything. But with her (and I think any good makeup artist), she knew what would look best on me and did not need much direction. She did a great job for my wedding and she was easy to talk to.

There was a travel charge, but for select cities like SD, she had a set rate which was less than if she had counted miles. 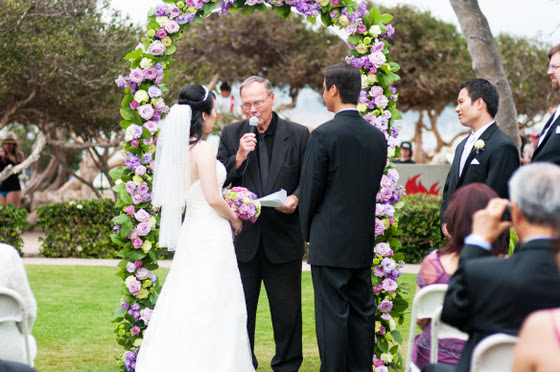 I was a little surprised at the prices some wedding officiants were charging considering how short the ceremony is and how easy it is to become an officiant or get a friend who is an officiant to do your wedding. While I like the idea of having your friend marry you, I also wanted someone with a bit more experience to help us out given the fact that we had chosen not to get a wedding coordinator.

Pastor Mike is a retire Lutheran minister who performs non-denominational and civil ceremonies. He was significantly cheaper than all the other officiants we look into. He has an insane amount of experience (more than 2,000 weddings) and pretty much had every ceremonial speech memorized.

He is in his 70s, maybe even early 80s, but he carried a smart phone and would respond to emails promptly. He helped us not only with the language for the ceremony but with general planning advice. With all his experience, he was able to advise us on the venue, etc.

We had such a strange experience meeting with some officiants. When we finally met Pastor Mike, he was just so calming and reassuring. Mr. K and I just both immediately loved him.

One other great bonus about having an officiant with so much experience is that he is one of a very select few in San Diego who have been appointed as an Authorized Clergy Notary, meaning he can prepare you’re confidential marriage license so  you don’t need to go to the county office to apply for a wedding license, saving us an extra step.

Well that’s all I have. Hope everyone has a great rest of the weekend!