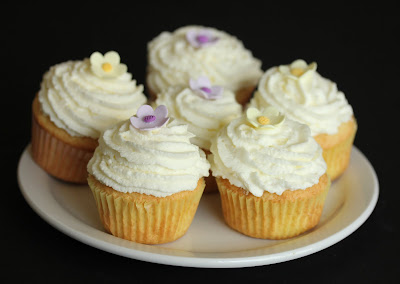 I have all this heavy cream sitting in my fridge that I’ve been needing to get rid of.  So when I saw this recipe for whipped cream cupcakes from justjenn recipes, I was excited to try it out.  The whipped cream cupcakes recipe calls for heavy cream and no butter, which I thought was interesting.  I also liked that this recipe wasn’t supposed to be dense like a pound cake. Almost all the cake recipes that I’ve seen using heavy cream have been described to be dense and pound cake like. 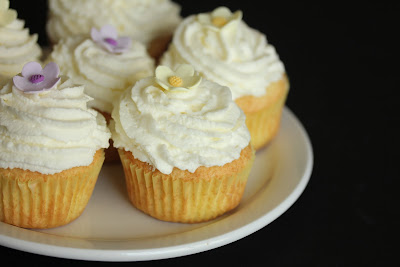 The cupcakes were easy to whip up.  I recently was finally able to get a hold of the Wilton 1m tip for frosting cupcakes. So I thought this would be the perfect opportunity to practice my piping skills. I know I should have probably used a buttercream frosting. So far I’ve been hesitant to use one.  First because no one in my family likes frosting, so most of the frosting gets scraped off and wasted. And second, every time I look at the buttercream frosting recipe, I just balk. I can’t seem to bring myself to make it.  I’ve baked some really heavy, not healthy desserts.  But buttercream frosting recipe seems to be one of the worst.  Plus cupcakes need a lot of frosting, so it’s not like something you can justify that everyone is only going to have one slice so it isn’t so bad.  I like eating buttercream frosting, don’t get me wrong. I just wish it wasn’t so unhealthy. 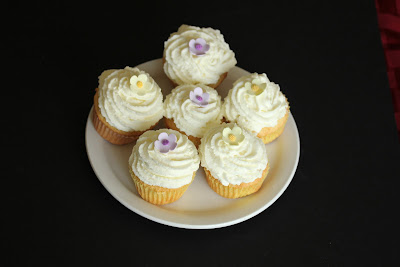 Anyway, I’ve been on the search for a healthier frosting. For these whipped cream cupcakes, I chose to use whipped cream (heavy cream and sugar) for the frosting.  I knew the fresh whipped cream wouldn’t hold nearly as well, but it was just stiff enough to work with it for piping purposes. I topped each cupcake with sugared flower petals I bought. 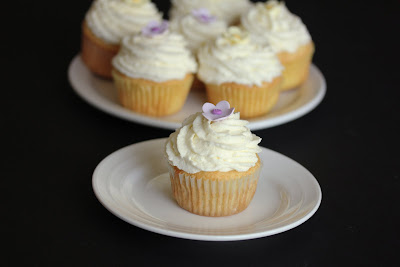 The cupcakes got mixed reviews. I personally didn’t love them. I’m not quite sure why.  Baby Bro and his girlfriend really liked them though.