Woomiok is a new Korean restaurant that recently opened in San Diego, specializing in seolleongtang, a type of Korean bone soup. The restaurant is opened by the owners of Common Theory and Realm of the 52 Remedies.

We ate seolleongtang for the first time a few months ago at the very popular Han Bat Shul Lung Tang in Los Angeles and really enjoyed it. I’ve been hoping that a place with a similar concept would open in San Diego, so I was very excited to try out Woomiok.

And with this rainy weather we’ve been experiencing, it is perfect weather for bone soup. 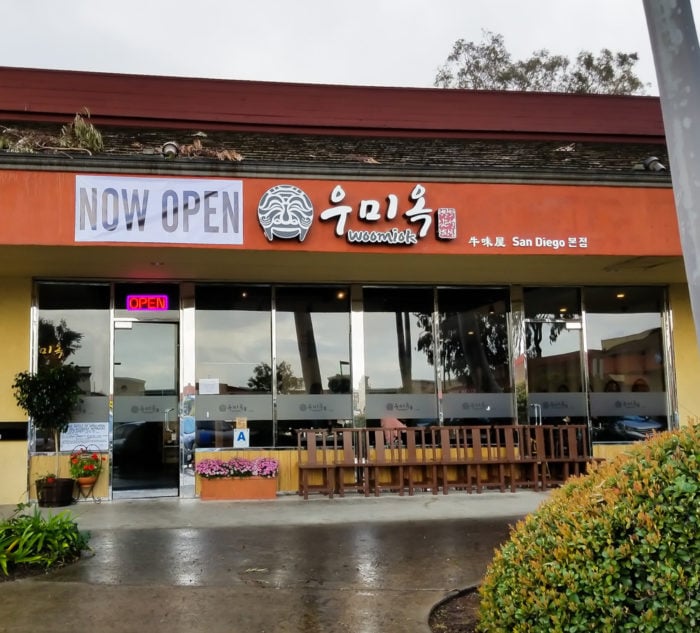 Since they are currently in soft opening, the menu is quite limited. Hopefully they’ll be able to add more to it soon.

For those unfamiliar with seolleongtang, I do think it helps to go in knowing what to expect.

Seolleongtang is a Korean bone broth made from ox bones. The broth is simmered for several hours, drawing out the flavor from the bones slowly, until the broth becomes a milky color. The broth is usually served with a choice of meats and noodles.

I read a few reviews where people complained that the soup was bland, but adding the salt and other seasoning tableside makes a huge difference. I also read complaints that there weren’t enough ingredients in the soup, but my experience each time I’ve had this soup is that it is mainly broth with just a few slices of meat and a handful of noodles. It is served with rice and side dishes.

We were served kimchi, cubed radish kimchi, spicy squid salad and rice to eat with our meal. 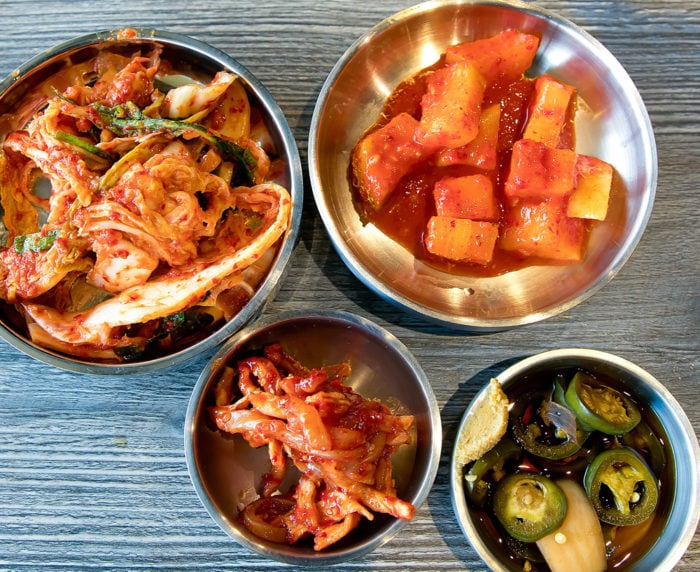 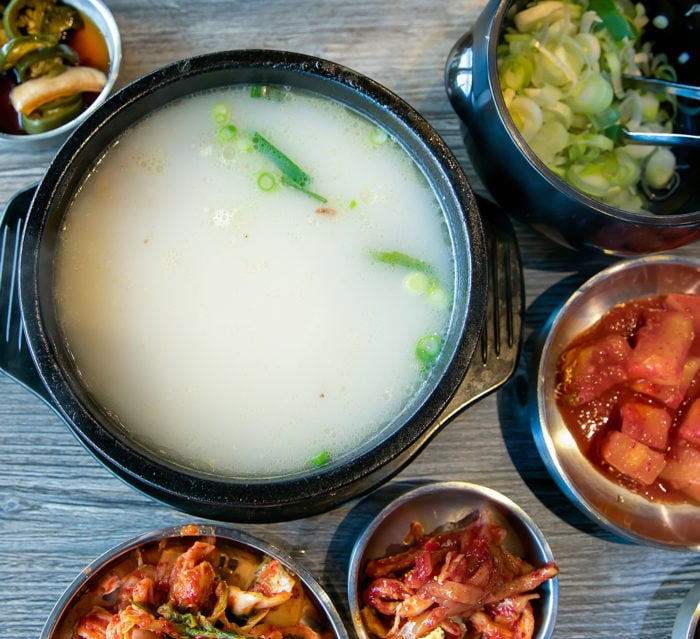 The meats in my soup were a mix of flank and brisket. It was also served with thin noodles. I found the noodles a bit too soft. I would have preferred vermicelli noodles which wasn’t yet an option though it’s my understanding it will be in the future.

The bone broth flavor wasn’t quite as concentrated as the version I had at Han Bat Shul Lung Tang, but it was quite comforting after adding some needed seasoning. I think there is some room for improvement. The bowls they are using for serving are quite large and I think to produce such a large quantity of soup daily, the broth is a little more diluted.

But still, this hit the spot on a cold rainy day. 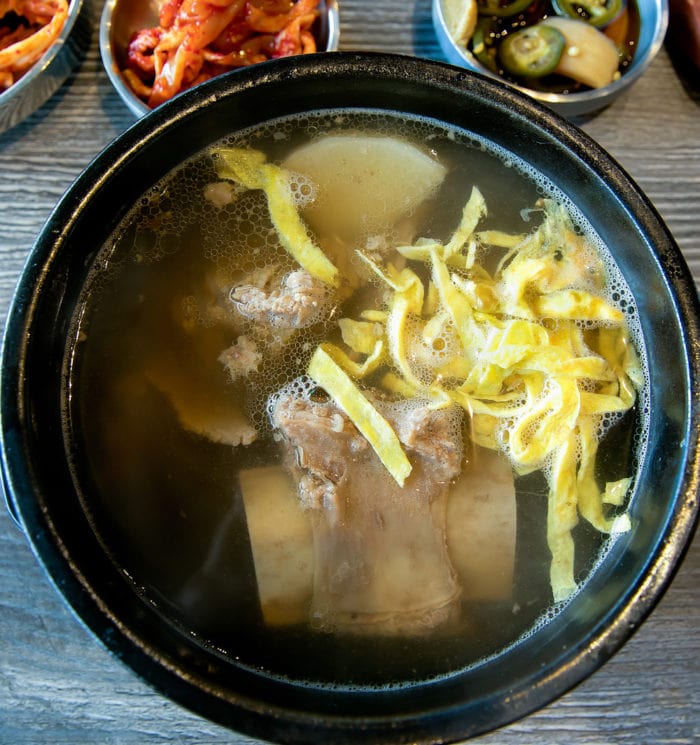 This was Mr. K’s choice. He liked that he didn’t have to season it himself and he really enjoyed the savory and slightly sweet short rib broth. The rib meat was soft and tender. I thought this version was on par with many of the beef short ribs soups we’ve had in San Diego. 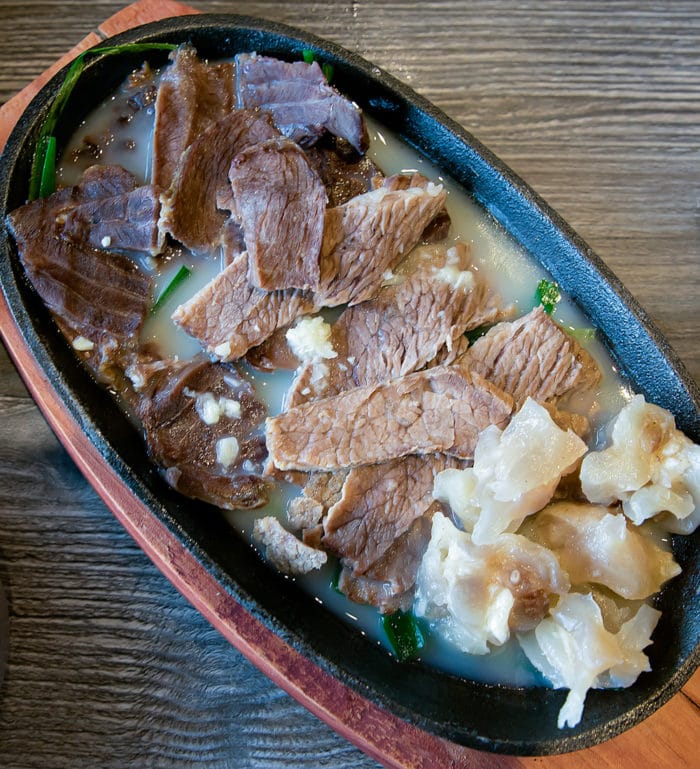 For those who wish to add more meat to their soup, this is a nice addition. I did find some of the cuts of beef to be a little tough, but I liked adding some of the meat to my soup.

Overall, we had a nice first visit. I would like to see more items on the menu and there were some hiccups with service, but I’m excited for this new addition. I’m sure the restaurant will continue to improve. I enjoy eating seolleongtang and am happy to see a restaurant in San Diego specializing in it. We will definitely be revisiting once they settle in.

Be sure to also check out Kirk’s visit here. 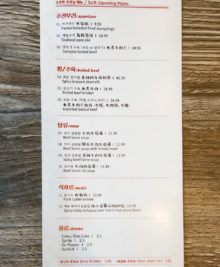