Learn about yellow watermelon, where to buy it, and how to use it in recipes! If you love regular red watermelon, I think you will like the yellow kind, too. 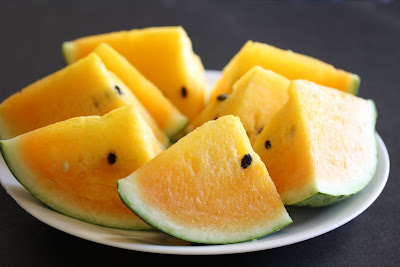 I picked up some yellow watermelon while grocery shopping the other day.  The yellow color looked so pretty that I decided to take out my camera and take some pictures before the slices were quickly devoured.  Cold, juicy watermelon is the perfect thirst quencher on a hot day.  Labor day is right around the corner but the weather in San Diego feels like summer is just arriving. 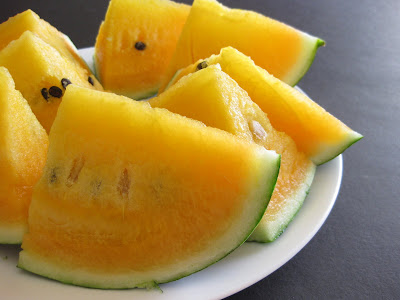 What is Yellow Watermelon?

I love trying out different variations of the more common versions of fruit like gold kiwis, white peaches, gold pluots, and yellow watermelon is a nice change from the regular kind.

The outside shell has a slightly different pattern/color than a red watermelon, so that you can usually tell the difference between the two even without a grocery store label.

How to Pick a Ripe Watermelon

By the way, do you know how to choose a watermelon to ensure you will have a juicy, crunchy sweet one rather than a mushy, unsweet, dry one?

I used to watch my mom hitting watermelons in the grocery store and people would come up to her asking what she was doing.  But sure enough, the watermelon she brought home were always good.  Sometimes she would show another customer how to do it; most of the time she would just choose one out for them. 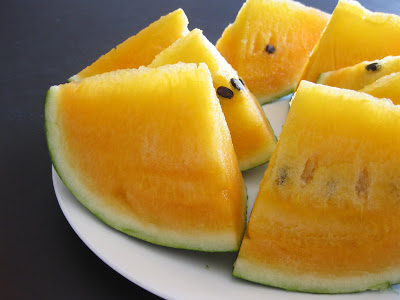 It took me a few years of shopping on my own before I got the hang out of it, but now I find myself patting watermelon when I buy them too.

When you pat them, you’ll hear a sound and the sound varies.  Sometimes the watermelon makes a hollow, crisp sound.  Sometimes it makes a dull thud.  You want to hear a sound that is crisp, and at the same time, you want to be able to “hear” the liquid inside.  So, it should sound crisp, but with a liquid swishing sound.

You can use yellow watermelon in place of red in pretty much any dish. Just keep in mind it’s sweeter so if your recipe has sugar you might want to adjust it to compensate. Here are some ideas you might like to try:

I hope you give yellow watermelon a try if you see it at the store! 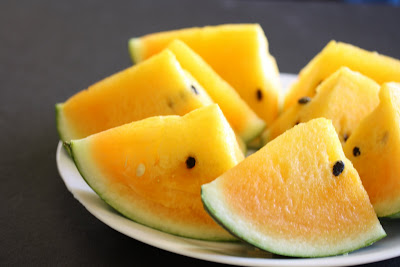