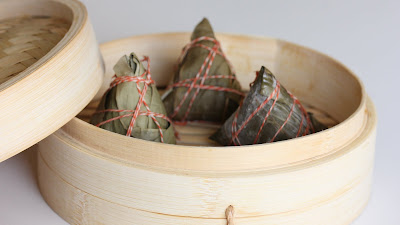 Duanwu Jie, also called Dragon Boat Festival, is June 16th.  With the date varying every year, the holiday completely snuck up on me this year.  I didn’t realize that it was coming up until I saw lots of “zong zi” which is the rice dumpling eaten during this holiday, on sale at Ranch 99.

During this day, it is traditionally celebrated with Dragon boat racing as well as the eating of zong zi. Last year I did a more thorough post about the holiday and various rice dumpling offerings. I’m going to keep this one simple since I didn’t buy as many dumplings this year.

The story of why Dragon Boat Festival is a holiday goes something like this: It is to celebrate Qu
Yuan, who was a famous poet and scholar.  He was an officer
for the Chu royal house during the Zhou Dynasty.  When the king decided
to align with the state of Qin, Qu Yuan opposed the alliance and then
was accused of treason and banished.  When Qin conquered Chu, Qu Yuan
committed suicide by drowning himself in the Miluo River.

As the story goes, the local people threw food in the river to feed
the fish so that the fish would not eat Qu Yuan’s body.  The food was
the zong zi.  Local people also paddled boats to scare away the fish,
which is where the dragon boat racing came from. 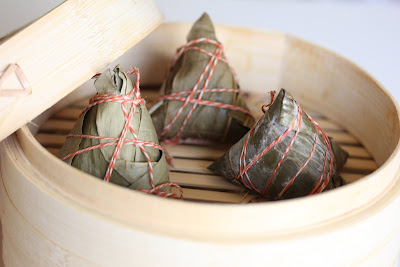 The rice dumplings are wrapped in bamboo leaves. Inside is a ball of glutinous rice, which is a very sticky rice. The rice is cooked with different things. There are sweet ones which are usually filled with red bean paste.  The savory ones can be filled with peanuts, mushrooms, egg yolks, meat, seafood, etc.

I’ve never seen them being made or tried to make my own. I usually just buy them at the store. The frozen ones are usually available year round. But during the holiday, you’ll find fresh ones as well, and more variety for sale.

To cook them, the dumplings are usually steamed. I cooked mine in a bamboo steamer, which I placed inside a pot with boiling water.

This year I bought some seafood ones. Here is a picture of the inside. 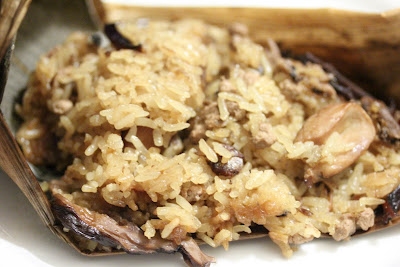 For more pictures of different zong zi you can read my post from last year here. 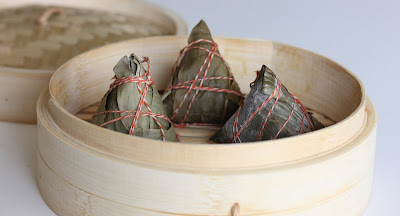