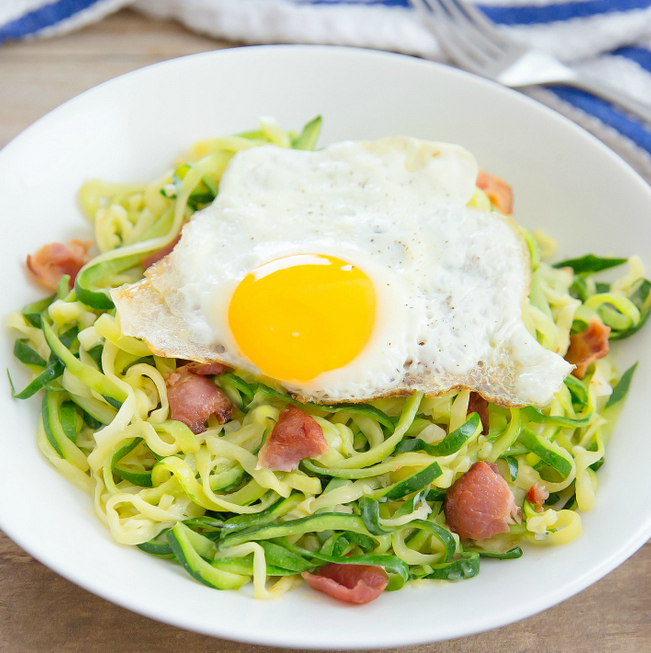 This is a low-carb and lightened up version of carbonara, one of my favorite pasta dishes.

My husband recently told me that he doesn’t really care for zucchini noodles. I, on the other hand, love them. Yes, they don’t replace traditional pasta, but they are a fun way to enjoy a lot of my favorite pasta dishes without all the heavy carbs. 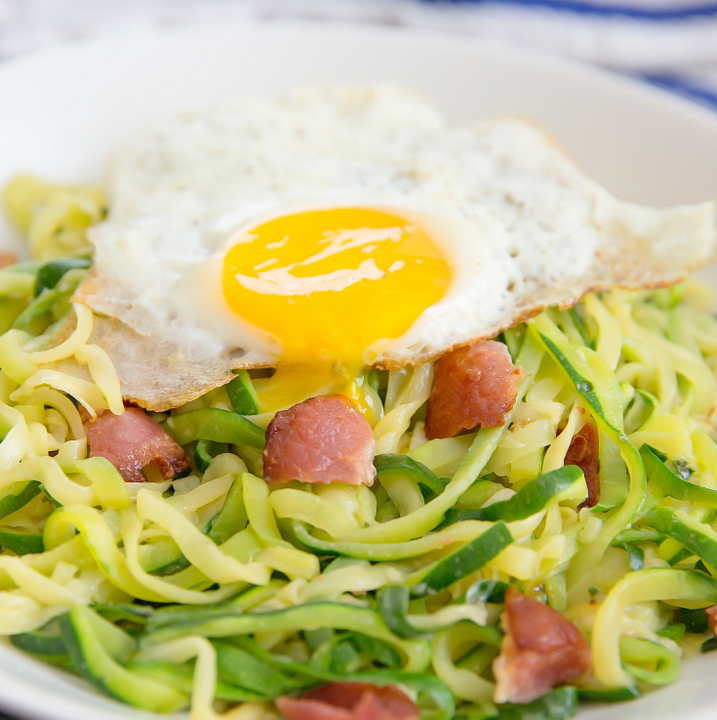 Whenever I make carbonara, I can’t help but think of the first time I had it. It was our one year dating anniversary and my husband, having recently spent his winter vacation in Italy visiting his aunt, decided he would cook me dinner. His aunt had taught him to make carbonara and he couldn’t wait to show off his new-found cooking skills. Unfortunately, my husband is pretty slow and meticulous when he is in the kitchen. And if you know anything about carbonara, you know that you have to be quick. Hot pasta is tossed in a raw egg and cheese mixture, using the heat of the pasta to gently cook the egg for a creamy sauce. Well, his didn’t quite turn out that way.

He was too slow in tossing the pasta in the sauce, so by the time he started, his pasta had already cooled. As a result, the egg didn’t have enough heat to cook. So he ended up serving me a pasta dish with gooey raw egg whites still clinging onto the noodles. After that, I didn’t touch carbonara for years. I eventually tried carbonara again years later and have been making carbonara ever since– just not with any help from the husband. 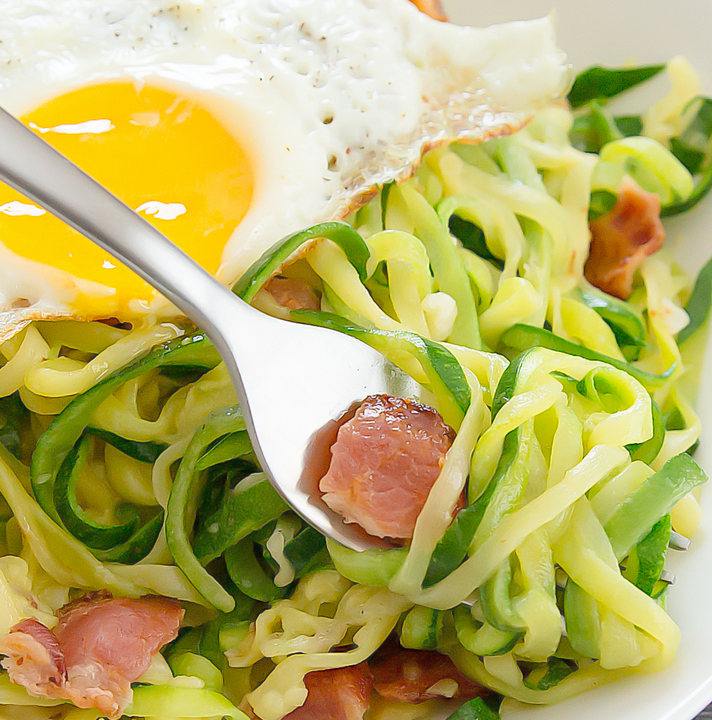 For this dish, I prepared it similar to traditional carbonara, but with a few modifications. I used bacon instead of panchetta because I rarely have panchetta in the house. I also used less of it since zucchini doesn’t soak up the oils as well as pasta. There is also less sauce. I drained off most of the sauce because the zucchini noodles release so much water when they settle, making the sauce very runny. Actually, most of the carbonara I had in Italy was not very saucy, so I didn’t mind not having so much sauce. The zucchini noodles are still coated in garlic, bacon and cheese. To make the zucchini noodles a little creamier, I added a fried egg. When you break the yolk and mix it with the zucchini, it makes the noodles extra creamy. 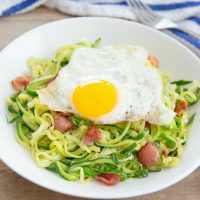 Servings: 2
Prep Time: 10 minutes
Cook Time: 10 minutes
Total Time: 20 minutes
Course: Main Dishes
Cuisine: Italian
This is low-carb carbonara is one of my favorite pasta dishes. Instead of pasta, the simple sauce is tossed with zucchini noodles for a lightened-up version of a classic carbonara.
Print Pin Rate

You need one egg to make the sauce and the other two are for the fried eggs, which you can serve on top of the zucchini carbonara.

Did you make this recipe?I'd love to see it! Mention @KirbieCravings and tag #kirbiecravings!
Posted in: Main dishes, Recipes, Zucchini
0 Comments // Leave a Comment »