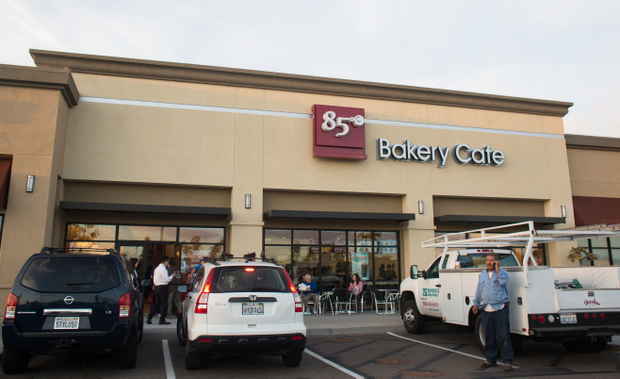 This past weekend, the popular 85ºC Bakery and Cafe chain opened its first location in San Diego to record breaking crowds waiting for the fresh breads, drinks and cakes that the bakery offers. 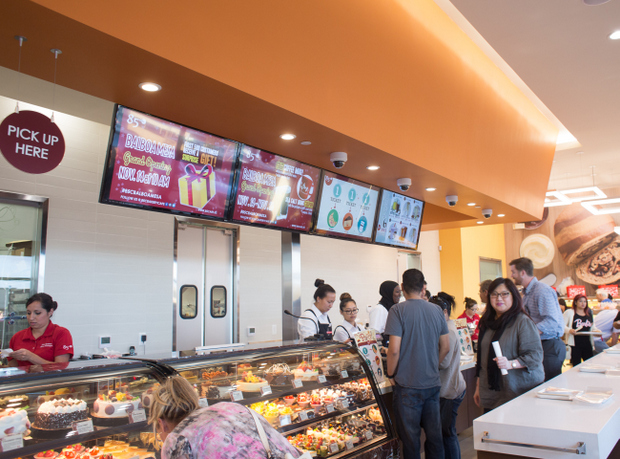 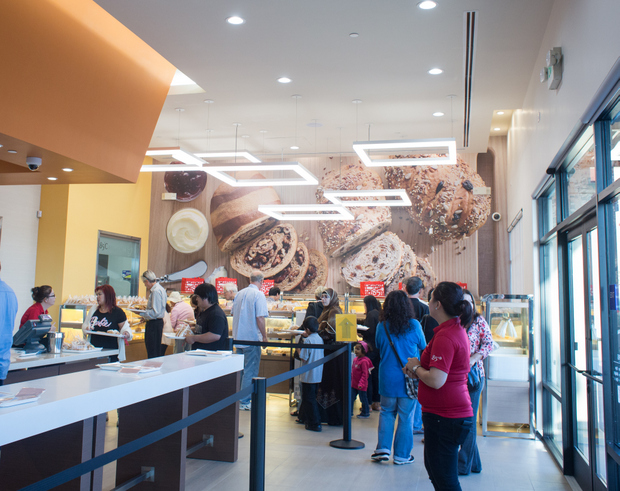 I’ve posted about 85C before, having visited several of their other locations in Southern California. For those unfamiliar, it’s a chain originally from Taiwan that opened its first US location in Irvine a few years ago. Since then, the chain has expanded throughout California, with several stores opening in Los Angeles and in Northern California. 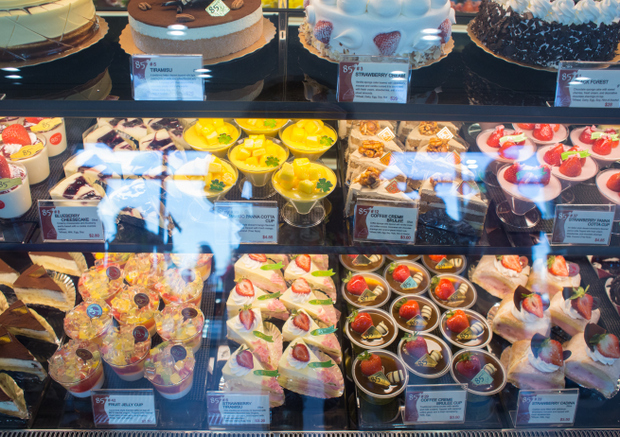 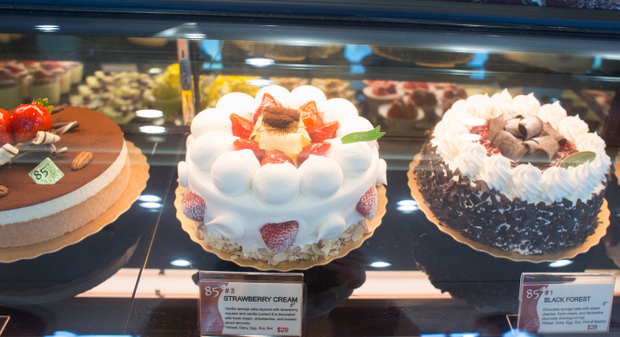 The reason for its popularity is it’s Asian-style breads. Not only are there more than 30 different varieties available, but they are constantly churning out new batches, with the magical tune of “fresh bread” being announced nearly every five minutes during store hours. The cafe also offers a variety of drinks, being one of the first on the trend of sea salt foam coffee. Finally, the bakery also bakes up beautiful cakes, which you can purchase whole or by the slice.

Taiwan is quite well known for their bakeries. I’ve had a hard time finding Chinese bakeries in the US that can produce breads as fresh, soft, or fluffy, until 85C. And while it’s still not as good as the ones I’ve had in Taiwan, it’s definitely the closest.

The grand opening was Friday. On Thursday evening, they had a small soft opening. They invited nearby residents and some fans on Facebook, giving the employees a chance for a practice run. I was extremely fortunate to have a good friend who was invited to the soft opening and was allowed to invite a few friends and he thought of me and Mr. K.

That evening, they had a good selection of breads, cakes and drinks. We were given 4 tickets to pay for our purchases, with each ticket entitling us to one item. 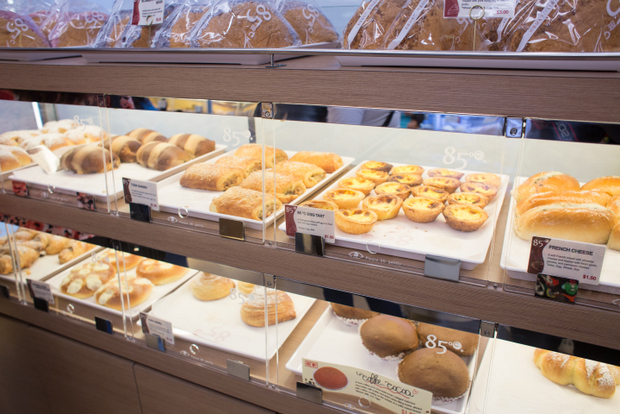 Even though I usually come for the breads and a sea salt coffee, we decided to try out some of the cakes on this visit. Normally, we don’t order the cakes because they don’t keep well in the car and we usually stop at 85C during a road trip. I’ve had some of their cakes for my past birthdays and really enjoyed them, so we decided to try a few more slices this time.

This is what we ended up getting: 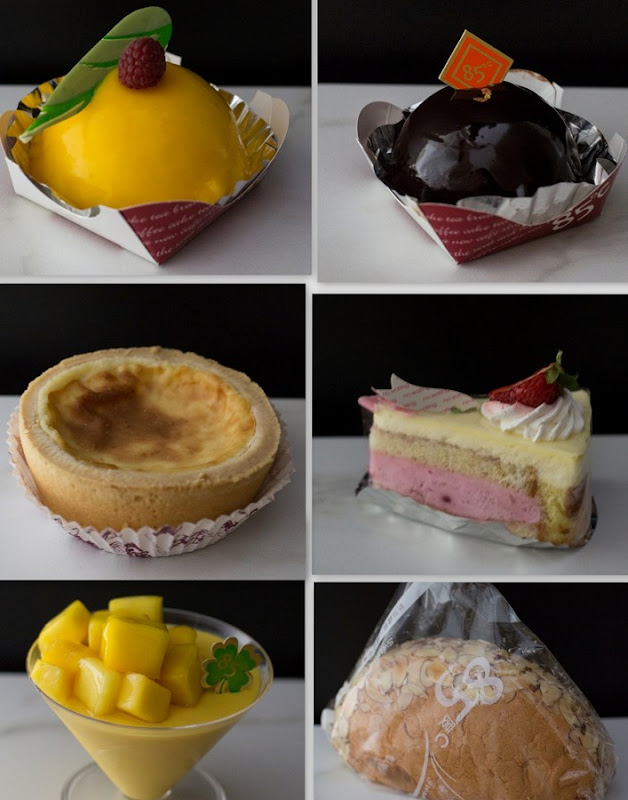 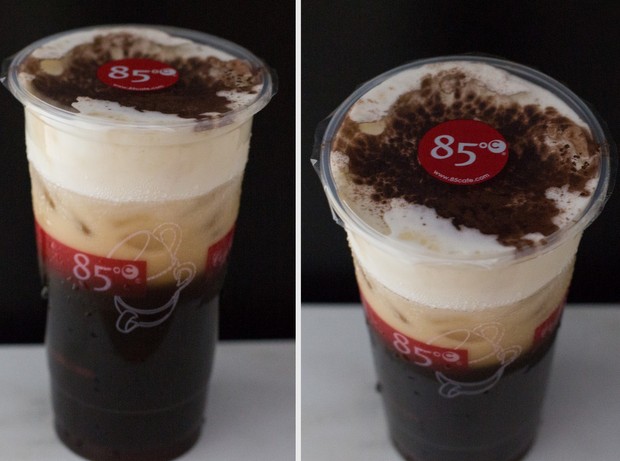 We also got the sea salt coffee. It has a layer of lightly salted foam on top, which when mixed with the coffee, give it an extra sweetness, much like sprinkling sea salt on cookies.

Friday morning was the grand opening. The first 500 customers received a “surprise gift,” which was a raffle ticket for various prizes. I knew it would be madness (I heard they had nearly 800 customers in three hours, breaking previous grand opening records). It so happened Mr. K had an appointment nearby and I asked him to swing by and just take a picture. The line wrapped around the building! 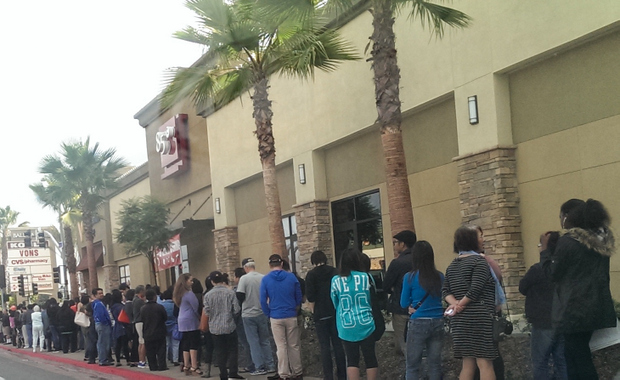 It seemed though, that by late Friday afternoon, the line had gotten considerably shorter, with people reporting wait times of only 15-20 minutes. So on Saturday, we decided to try to visit for ourselves.

During the grand opening weekend, they were giving out a mug with $20 purchase and a coupon for a free sea salt coffee for each drink you purchased. I just couldn’t resist!

We  passed by in the morning, but the line was at the Vitamin store which was too long for me. We then went again around 5pm, and the line was pretty short. We only waited about 15 minutes. Of course, once we got in, there was barely any bread on the shelves. Everyone was buying so much that they simply couldn’t bake fast enough. 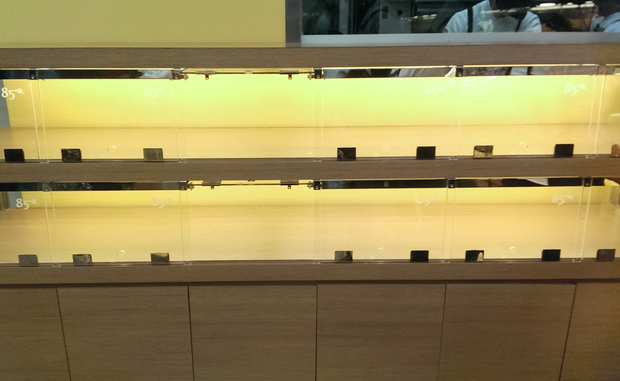 The shelves are usually stocked, but they were mostly empty with just a few trays filled with custards, cookies and a few bread varieties. Once we got the ones we wanted, we got in line for check-out. While waiting in this line, as soon as fresh bread came out, the employees would go directly to the people in line, letting customers add to their tray since the offerings at the bread area were so slim. 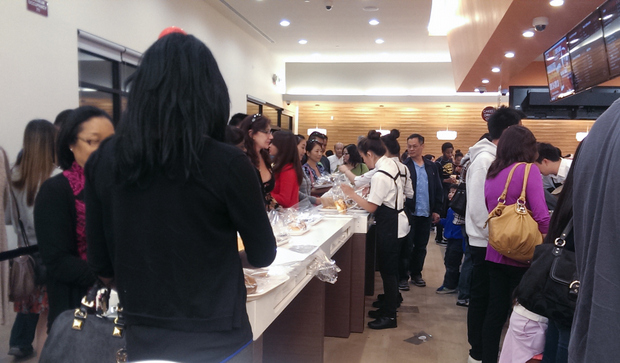 The two best selling breads at 85C are the brioche and the marble taro. At the other locations of 85C, they are so popular that they usually just keep it behind the register rather than on the shelves and you can request the breads when you go to pay. Since so many people wanted them this weekend, they didn’t ever have any extra to put out. A lot of people were simply standing around and waiting, asking people to go in front of them in line, as they waited for the next batch. 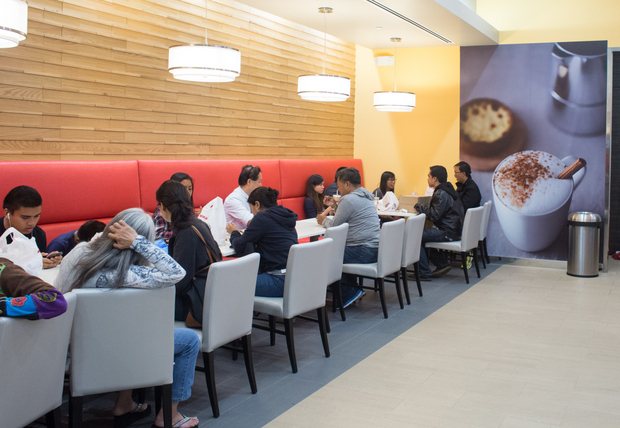 When we went to pay, we asked if it was possible to order the brioche. You do have to wait for them, but you can go sit down at a table and wait and not stand around in line. The wait didn’t seem nearly as bad since we were seated and eating our cakes and drinking our coffees. 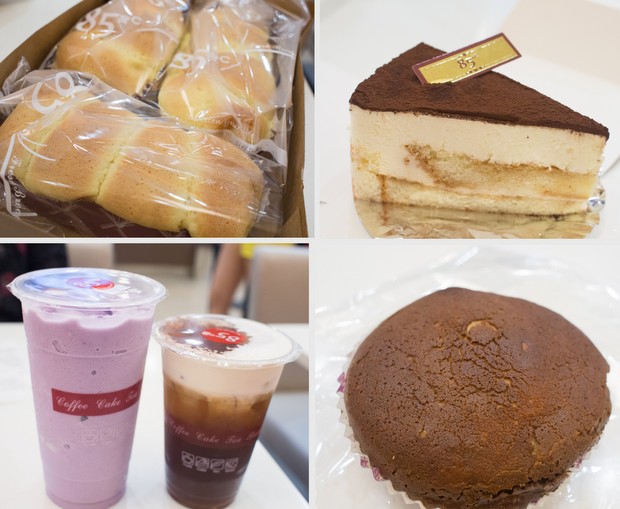 We ordered drinks and got coupons for free sea salt coffee in exchange for each drink purchased. We also purchased several brioche (we had to wait about 20 minutes, but it went by quickly since we were eating and drinking), tiramisu cake, and a coffee flavored bread.

With our added brioche breads, we also made the $20 limit, so I got my mug. I love it! 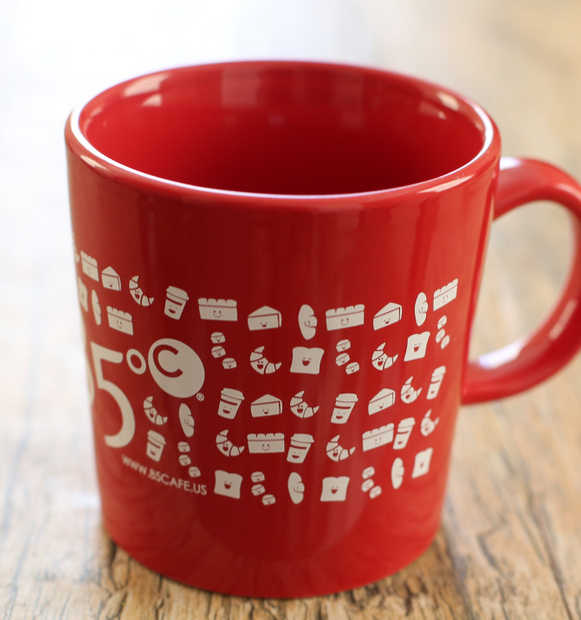 They were also handing out these keychains to all the customers. 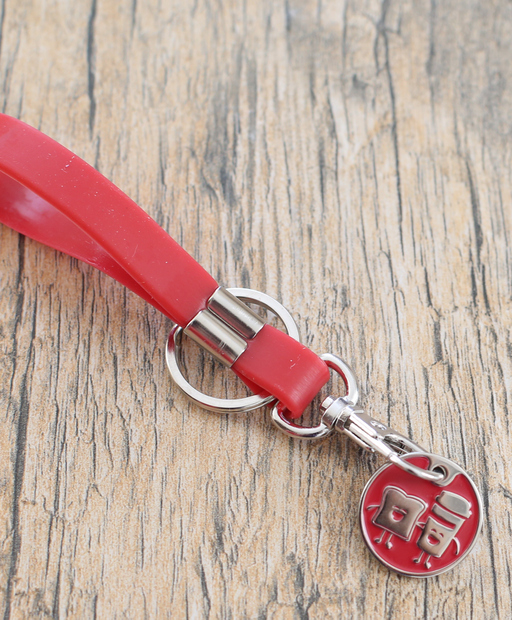 I often get asked which are the breads to get here. I definitely recommend their best seller brioche. I also really enjoy the marble taro, giant brioche and calamari sticks. 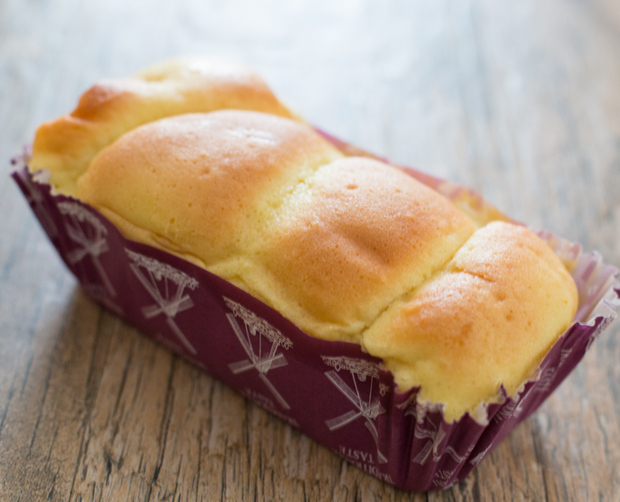 This is a sweet, buttery, soft loaf with no filling. 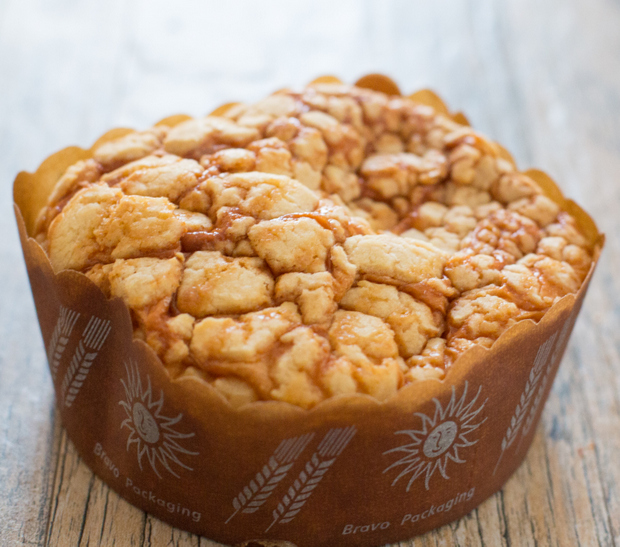 Similar to the Taiwanese pineapple bun, but in a giant cupcake form. 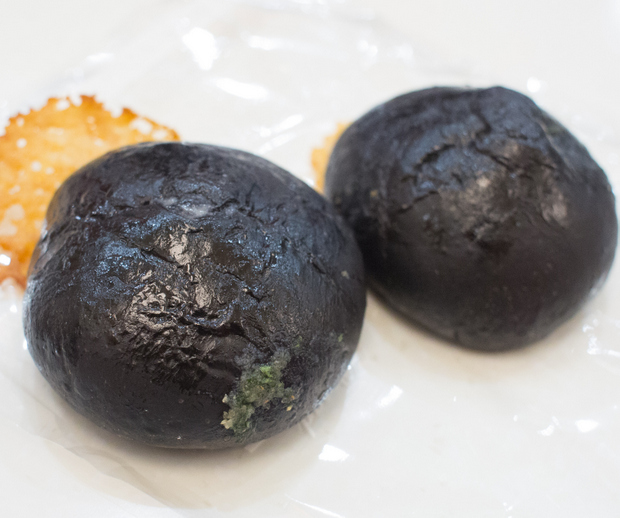 This is like garlic bread, but the bread is made with squid ink. It’s a savory roll that is also one of the cheapest things you can get ($1 each). 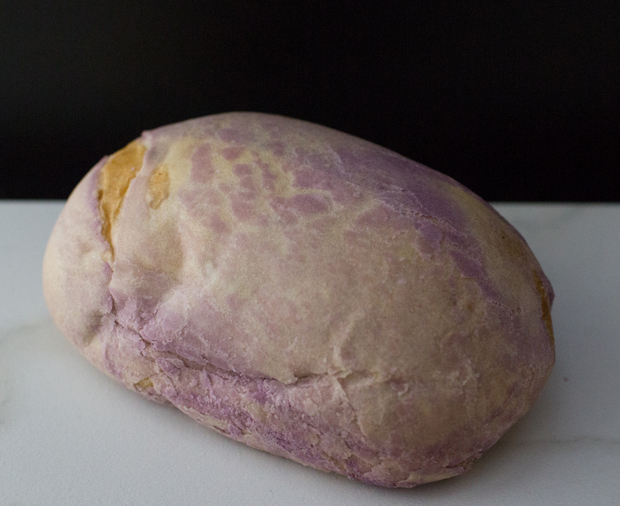 An extremely soft bread with swirls of taro paste within.

Tip: While the bread offerings vary from day to day, the brioche and marble taro are constants. If you don’t see them on the shelves, you can usually order them at the register.

Despite the craziness, things weren’t too bad Saturday evening and I’m sure the bakery will only continue to settle in. We had a good time though and I was happy that the quality of the breads were on par with the other locations in the US I’ve been to. 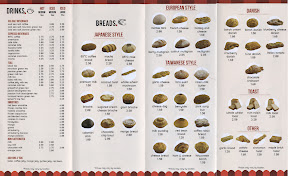 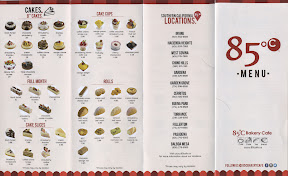