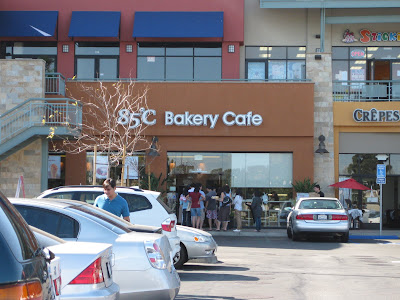 85C Bakery Cafe is located in the Diamond Jamboree Center in Irvine and sells a variety of drinks, cakes, and most importantly: breads.  Lots and lots of breads. Loaves of breads, sweet breads, salty breads, filled breads.  The breads all melt in your mouth like butter.  They are super soft and super fresh.  In fact, throughout most of the day, you will hear the words “fresh bread” about every two minutes, and see an employee carrying a plate of piping hot breads. None of the breads you buy are probably more than a few hours old, unless you go late at night.

The chain comes from Taiwan.  In Taiwan, this chain is apparently quite popular, and has been likened to the equivalent of Starbucks.  I actually have never visited the stores in Taiwan, so I don’t know how this one compares.  85C in Irvine is the first location in the US!  I’m surprised they chose Irvine, but am also happy as it is closer to me than LA.  85C is supposed to be the perfect temperature to serve coffee at.  I’m not sure why they chose this for the name because I don’t think coffee is their big selling point. Maybe it’s different in Taiwan.  I’ve tried their coffee, and while it tastes good, it’s nothing special. 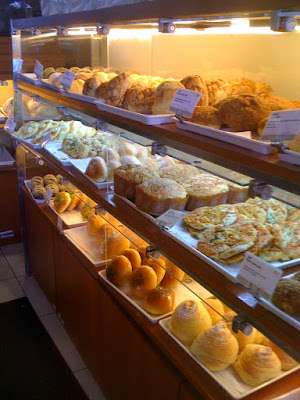 Back to the breads.  I love chinese breads.  Especially the classic pineapple bun (buo lo bao), but I love others as well.  Most asian grocery stores and asian bakeries make various chinese breads/pastries, and they are pretty good.  However, they are nothing compared to the ones I ate in Taiwan.  The ones in Taiwan are so much softer, fresher, and last so much longer!  I’ve found that when I buy a pineapple bread in the U.S., it tastes good the first day, but it is already stale by the next morning.  When I went to Taiwan, my relatives would buy a week’s worth of bread at a time.  The breads would taste as soft and fresh at the end of the week as they did at the beginning of the week.  I don’t know what kind of magical secret ingredient they use in Taiwan, but it is amazing how good their bread is.

So, anyway, back to the bread at 85C.  I heard about this place shortly after it opened.  According to various articles I read, they supposedly brought the bakers and equipment from Taiwan so that they could get the bread as good as it is in Taiwan.  So I was super excited by the opening of this bakery.

Here are some of the breads 85C offers:

So do the breads live up to all the hype? As you can see by my title, I
think so!  I still don’t think they are quite as great as the ones in
Taiwan, but the breads here are better than any bakery I’ve eaten in
the U.S.  And I’ve been able to keep the breads for a few days without
going stale.

You can’t beat the freshness of these breads.  Normally, a bakery will bake fresh breads about once or twice a day.  At 85C, the breads are constantly being baked from morning until the evening. You can see the bakers busy in the back, and as you choose your breads, you will constantly hear the chimes of “fresh bread.”  It actually makes it hard to finish choosing your bread.  Because just after you choose some bread and put it on your tray, you hear “fresh bread’ and a new tray of the bread you just chose is now available to be chosen!  Or you are waiting in line to pay, and you see trays of new piping hot bread… 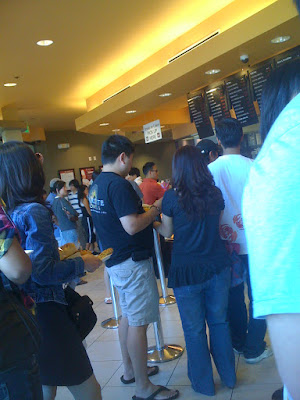 This place has been open for about six months now, and the line is almost always out the door.  I would not be discouraged though because the line moves pretty fast.  The bread area is a bit cramped and small.  Some reviewers have gotten very annoyed about this.  I personally don’t think it’s that big of a deal.  The set-up is similar to other chinese bakery shops.  You grab a tray and a pair of tongs and then go to the trays of bread and choose the ones you want.  The prices range from about $1.00 to $3.50, depending on what you get.  They have a lot of variety including mini pineapple bread, giant pineapple bread, milk bread, brioche, blueberry filling bread, taro swirl bread, mocha mochi red bean bread, bread with calamari filling, ceasar bread, pizza bread, rose bread with cream cheese filling, maple toast, etc, etc.  It also seems like every time I go, I see a new type of bread.

I personally prefer the sweet breads.  I find the salty breads to be a bit oily with their toppings and also have a weird taste because the bread still has a little bit of sweetness.

Here are some of the breads I got on my last visit: 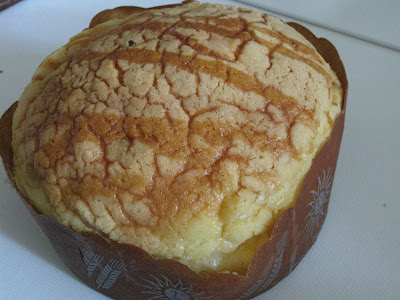 This is a giant version of a pineapple bun. It looks like a giant muffin, and the outside has the crusty outside like the chinese pineapple bun.  There is no filling inside.  One of these is about the size of three regular pineapple buns.  This is one of my favorite breads at this place.  85C also makes mini pineapple buns, but the bread used is different and I don’t like it as much. 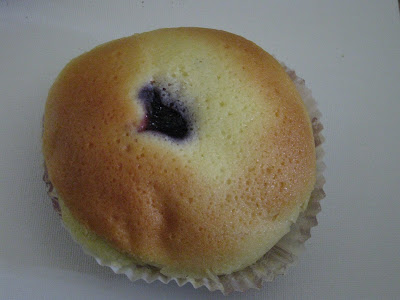 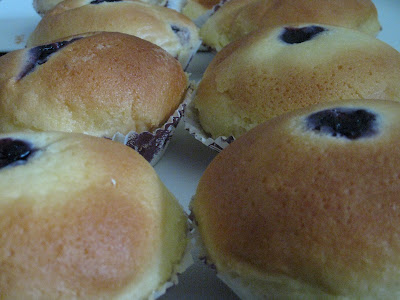 Blueberry delight.  At least I think this is what this is called. Inside is a blueberry cream cheese filling. This is the boyfriend’s favorite.  I enjoy the price as this is one of the cheapest breads they offer, priced at $1. 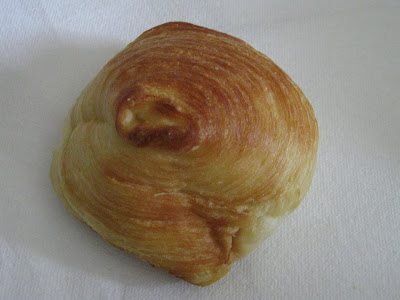 Bread with taro filling.  The crust is sort of like a croissant, and inside is a taro paste.  This is the first time I saw this bread being offered and decided to try it.  I don’t enjoy it as much as their taro swirl bread. 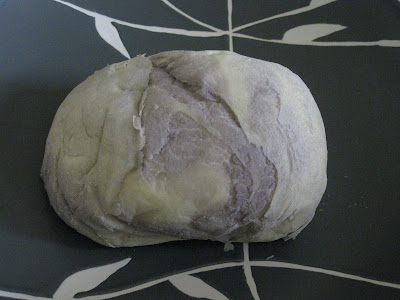 Taro swirl bread.  This bread is very, very soft.  It reminds me a bit of a mantou (chinese white steamed bun with no filling).  It’s not too sweet.  It is swirled with layers of taro paste. This bread stays soft for a very long time. Yum. 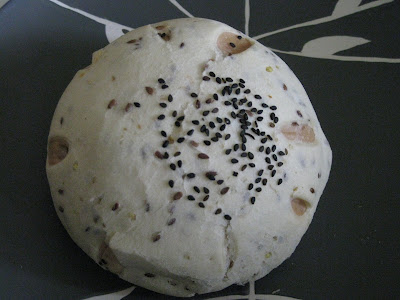 Rose flavored bread with cream cheese filling.  This is a very pretty bread.  It’s also quite heavy.  It is made with the same bread material as the taro swirl, but the bread has a rose flavor to it.  Inside is a cream cheese type filling. I enjoy this bread, though it is a bit rich, so I can’t eat it all in one setting.

I also bought a maple toast.  It’s a slice of brick toast, toasted and with maple syrup drizzled on it.  I gobbled it all before I could take a picture though.  The maple toast is best eaten right away while it remains crunchy.

If you are in the area, I would definitely recommend stopping by and picking up some delicious breads.  It will be hard to grab just a few.

The cafe also has some tables set up.  It’s open late, allowing people to hang out.  I’ve tried their drinks a couple times and some of cakes. 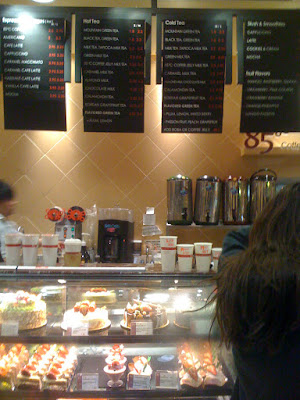 The drinks are a bit overpriced and they don’t have many choices.  They taste just okay, but not anything special and not worth the high price. Like I mentioned before, while this place is called 85C because of coffee, the coffee tastes good but not great. 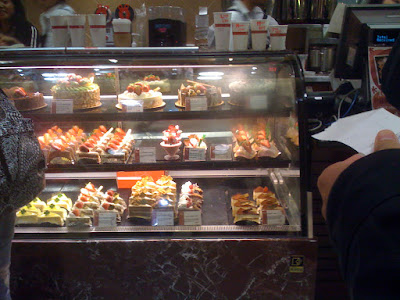 The cakes are pretty, but also expensive.  And I don’t think they taste that great.  They don’t taste better than cakes I get at other chinese bakeries.

The Diamond Jamboree plaza is very interesting.  It’s full of lots of different asian restaurants on both the ground and second level.  So far, I’ve only been
there on my way to somewhere else, so I only stop by to pick up some breads.  If I’m ever in the area longer, I would like to try one of the many restaurants.  On this last trip I noticed this: 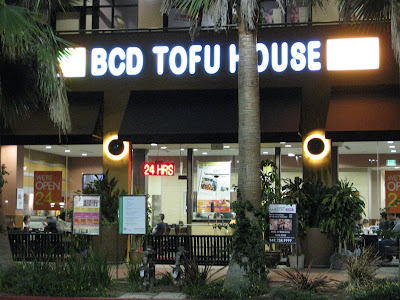 A tofu house opened 24 hours! I found this to be very interesting.  I hope to try it sometime.

When I first came in the plaza, I also noticed a place called “Guppy House.” I was intrigued by the name, as I am a guppy fish owner.  I couldn’t tell what kind of food the place served. Japanese perhaps? Then as the boyfriend and I were leaving, I noticed people sitting outside with tapioca drinks, and I also saw tanks of fish inside!  Seeing this, I just had to make a quick stop.

This place reminds me a lot of Tea Station. My post on Tea Station can be found here.  This place is basically a tapioca place that also serves meals.  Most people here are here to dine in.  They have a menu that serves various chinese dishes, mainly the kinds of dishes you see at other tea houses, like popcorn chicken, curry, fried rice. They also have various tea drinks.  I also saw quite a few brick toast flavors.  And shaved ice!  The prices are definitely on the expensive side though.  The menu can be found here. Since the boyfriend and I had just come from dinner in LA, we weren’t very hungry. Next time I come, I want to try a dine in special I saw.  Popcorn chicken + shaved ice + coconut butter brick toast.  The shaved ice seem expensive, but are quite big.  They also have shaved ice to go, which costs about $6.00.  I decided to go for that.  I debated between mango or taro and red bean.  I ended up trying the taro and red bean: 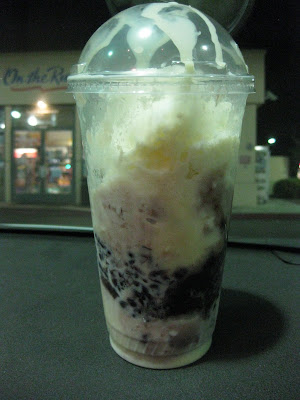 Not bad, but not special.  Typical of other shaved ice I have had in San Diego…none of which tastes anything like the yummy shaved ice back in Taiwan. Ah well. It was a lot of ice, condensed milk, taro chunks and red bean.

Next time, I want to try the brick toast and the mango shaved ice! Here are some pictures of the inside. They have blue lighting, making it look like an aquarium.  they also have some fishtanks, but they had goldish rather than guppies.  Still pretty cool looking though. 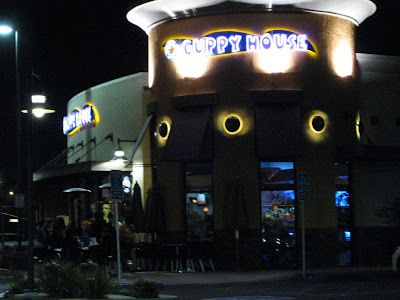 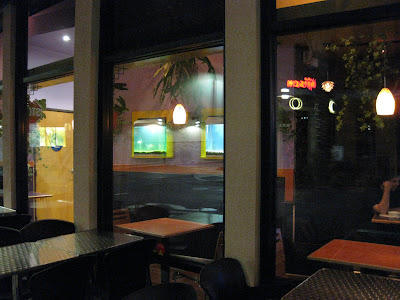 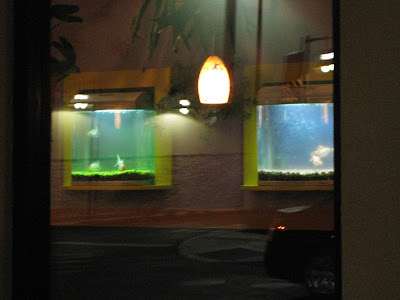 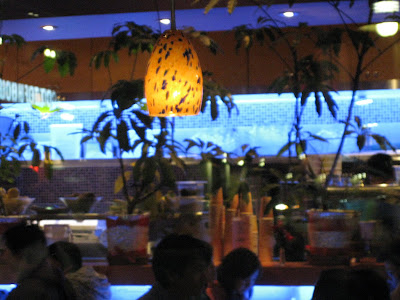 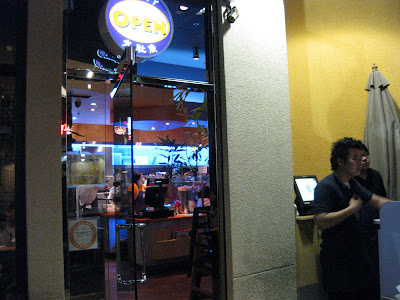