For two years I’ve been begging and hoping for San Diego to offer shaved snow ice, a form of shaved ice that is fluffier than regular shaved ice due to the milk added to the ice blocks. And now suddenly it’s everywhere. I’m loving all the options, though I think it’s weird that they are all popping up at once.

I didn’t think I’d be back to Angel & Hearts after a mediocre experience with their Harajuku-style crepes. But then I got a tip from Jinxi that Angels and Hearts was serving snow ice, so I went back to check it out. 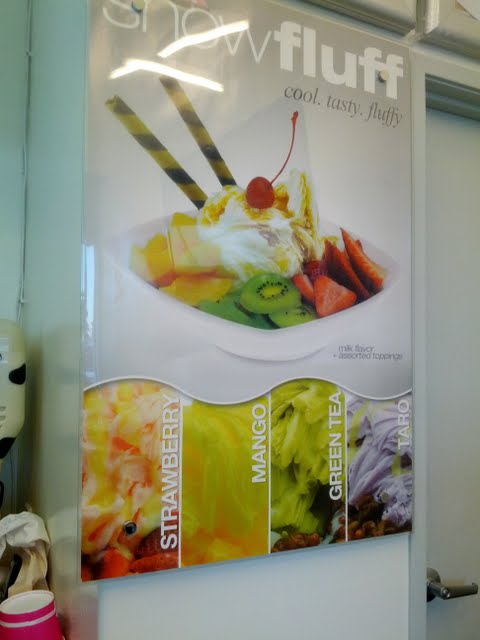 Sure enough, there was a big sign on the door showing the snow fluff ice. One thing we noticed immediately when we went inside is that their snow ice machine is imported from Taiwan, as opposed to the other new snow shaved ice places which are using a brand distributor in southern California. 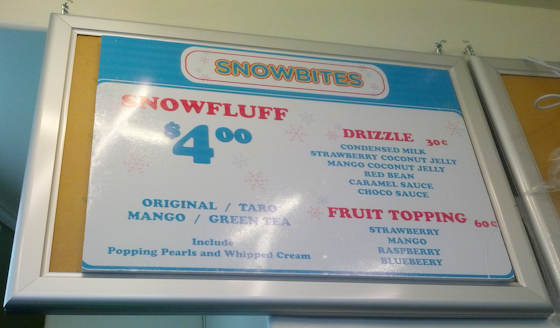 There are currently four flavors to choose from: original, taro, green tea and mango. The snow ice is $4 and includes a dollop of whipped cream (which I’ve never seen used with snow ice) and a few popping pearls. If you want to add condensed milk or other sauces it’s an additional 30 cents, and if you want to add some fruit toppings, it’s an additional 60 cents per topping. 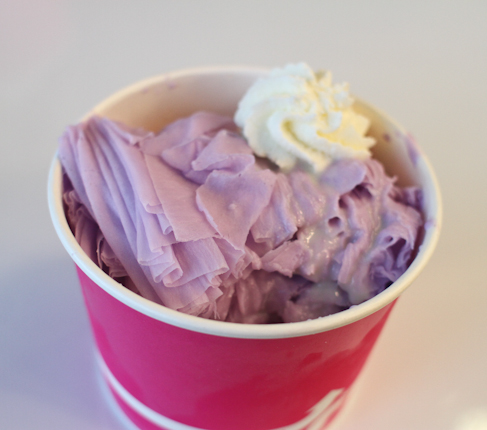 I love how beautifully the snow ribboned into the cup. This is how snow ice should look. The ribbons were so thin and delicate. I was prepared not to like the snow ice here, but I have to say, this was the best taro flavored snow ice I’ve tried both in terms of flavor and texture. The texture was even softer than Yogurt Swirl, whose snow ice I was already pretty happy with and the flavor wasn’t too artificial tasting, which sometimes can happen with taro. I was surprised at how great the texture was. DH’s theory is that the shaved ice machine makes a difference and he thinks it was better because they used the Taiwan machine. 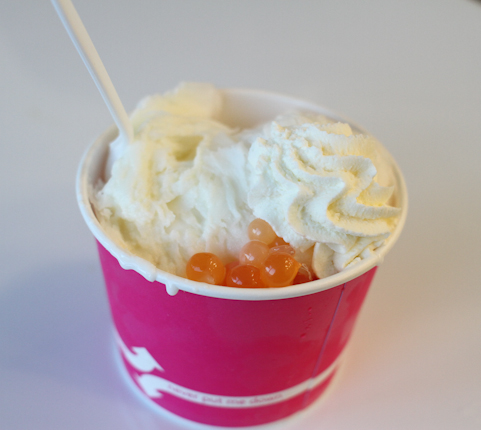 We didn’t really like the original snow and I wouldn’t recommend this flavor. It tasted more like sugar water and didn’t have enough of a milk taste. It’s strange. Normally original milk is our go-to flavor, but San Diego seems to struggle with this flavor and we haven’t really found one we love. I’m really not loving the shiny white tables and what they do with my photos. 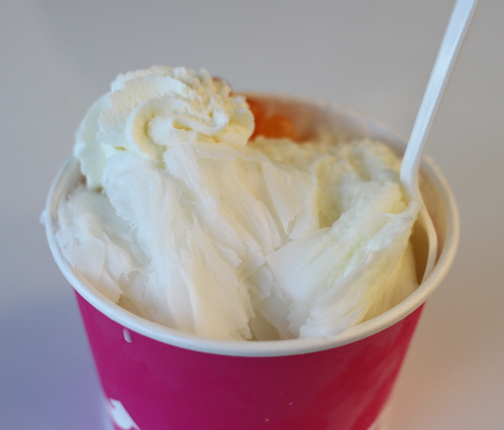 Overall, we enjoyed the snow ice here. I don’t like the lack of topping choices or that they charge for condensed milk and toppings, but I enjoy the snow ice itself. Yogurt Swirl’s snow ice isn’t quite as soft but they offer a ton of flavors and toppings. I’m so excited that there are now two good snow ice places in San Diego and I plan on stopping by both places often–I don’t care how cold it gets.