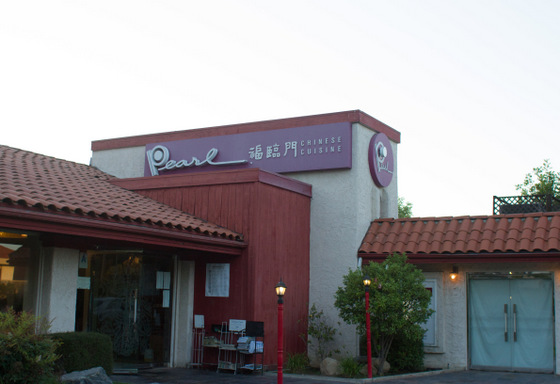 I mentioned previously that Mr. K and I recently celebrated our first wedding anniversary. Of course we wanted to do something special to commemorate the occasion.

We’ve actually known how we wanted to celebrate it since our wedding day.

I draw a lot of inspiration from Cathy of gastronomy blog. A few years ago, she shared a post on how she and her husband celebrated their first anniversary: revisiting their wedding reception restaurant and ordering their banquet menu again just for the two of them. I thought the idea was crazy and brilliant and I secretly wanted to do just that. When I showed the post to Mr. K, he just thought it was crazy.

Fast forward to the day of our banquet. Mr. K had never experienced a Chinese wedding banquet and it was the one thing I really insisted we have even though it took up a significant chunk of our budget. Well, he enjoyed the banquet so much that he whispered to me in the middle of it that he wanted to relive it again. I immediately knew he was thinking of the gastronomer’s post.

So one year later and we both agreed that we still wanted to do it. Now, in some ways it’s not completely insane. We didn’t actually order a banquet. We just ordered the majority of the dishes served during our banquet which is also available on the regular menu, in normal family sharing entree portions rather than the feast portions served during a banquet.

Still, it was a lot of food, especially for two people, and we actually were barely able to make a dent into our meal. But we had a lot of leftovers to enjoy for a few days. As a reminder, here is a summary of our wedding banquet.

We skipped the traditional cold plate appetizer that we had served our guests during the wedding banquet. 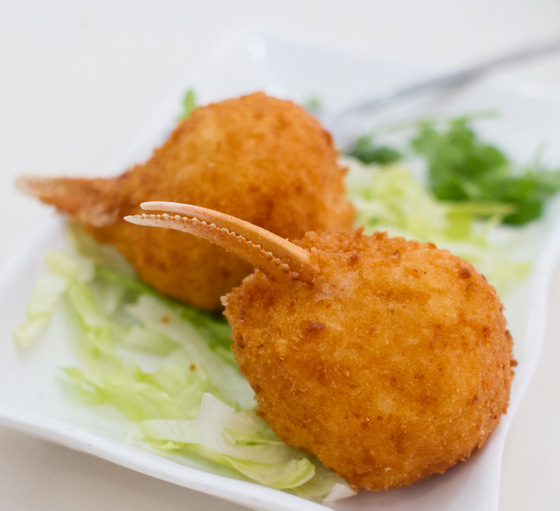 A regular order comes with only two crab claws, which was just perfect for us. I don’t think the photo shows just how large these crab claws are. They are handmade and stuffed with shrimp. They take a while to make, so these actually arrived near the end of our meal. 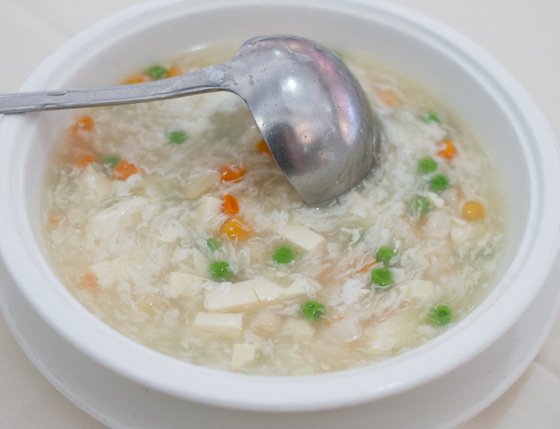 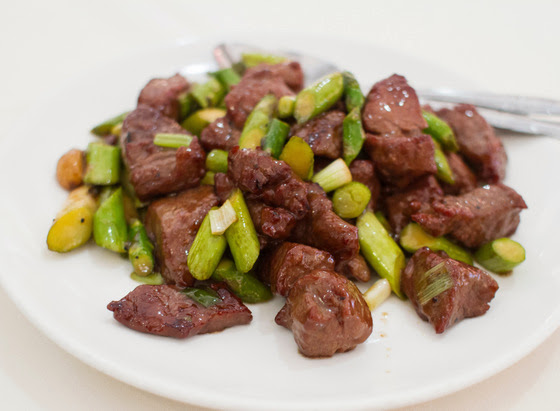 For the wedding, this was served in a bird’s nest. I really liked the tender chunks of filet mignon. I did miss the nice presentation from the wedding and the meat was a little too salty. 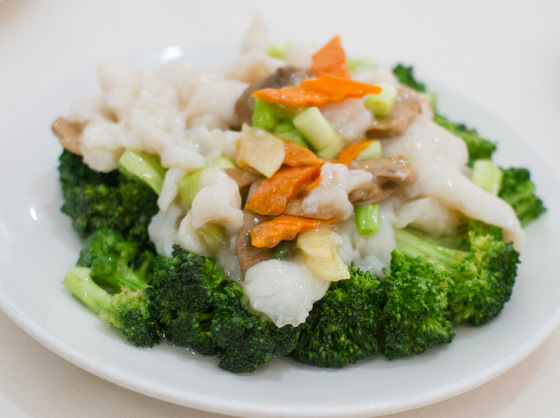 The next banquet dish was a mushroom and vegetable dish that we decided to change because Mr. K didn’t like the bitter vegetable in it. Instead, we ordered a broccoli and sauteed fish fillet.

We had been all set on getting this one again, but we found the market price for the lobster to be too high. Also the live lobsters they had were all enormous and so the dish would have cost more than I was willing to pay. Since the opening of H Mart, they often have lobster on sale for $6.99/lb and Pearl was charging $28 per pound. We joked that we should go buy our own and ask if they can cook it for us. 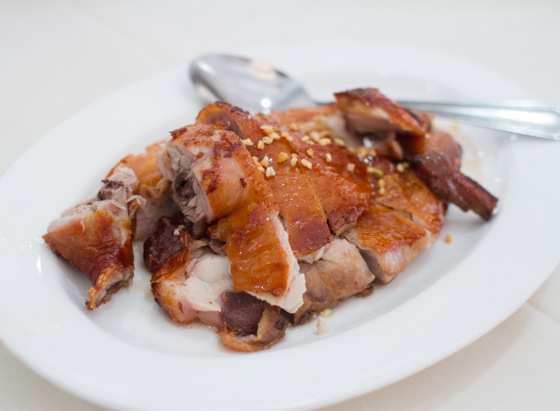 This was exactly how I remembered. We loved the crispy skin, though the meat is a tad too salty.

The next dish was supposed to be the Tea Smoked Chilean Sea Bass. We had barely tasted this at our wedding and our guests raved about it, so we were really looking forward to see what the fuss was about. Unfortunately, this dish needs to be ordered 24 hours in advance which we didn’t know. Next time. 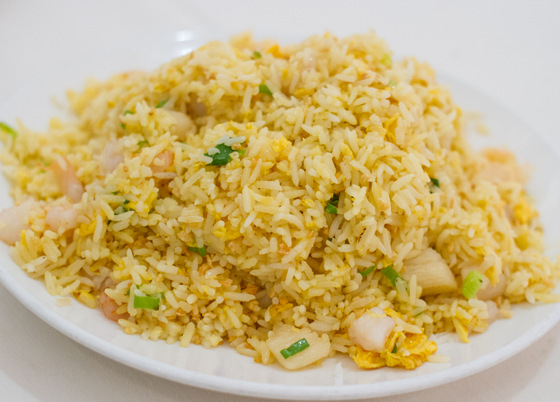 This looks sad compared to the presentation I remembered from our wedding, but it tasted better than it looked. 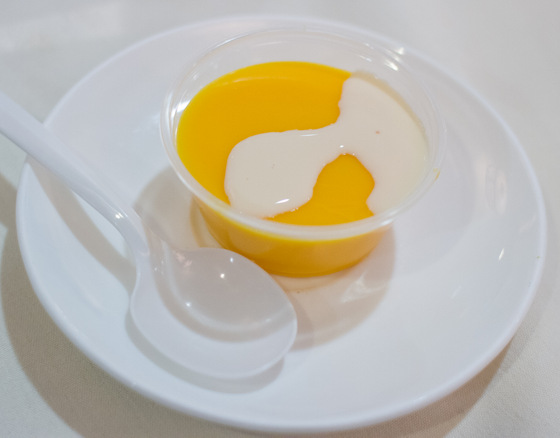 Once again, our meal ended on a sweet note with mango pudding.

We had fun reliving our wedding reception again and this time getting so many leftovers to take home. Without realizing it, we ended up with a meal of seven dishes, which is a lucky number for us. Despite eating a ton, it looked like we barely made a dent. I captured this photo which was a little more than halfway into our meal. 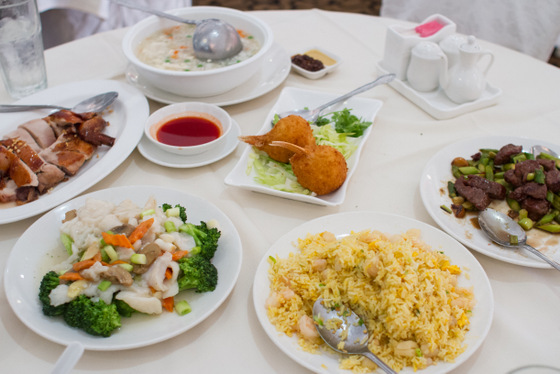 Obviously the entrees lacked the presentation from our wedding banquet. The dishes also were not executed nearly as well as our banquet, which is something I was afraid of. The manager had explained to us when we were planning our wedding that it’s a completely different set of kitchen tools and staff for wedding banquet food, and it definitely shows. I’ve always enjoyed Pearl’s food and it’s pretty good compared to other San Diego options, but pales in comparison to what can be found in LA or the South Bay Area. When we had the banquet, I thought the food had been just as good as any other banquet I’ve experienced in the US, but the food for our anniversary meal was more of the ordinary Pearl experience. Nevertheless, it was a memorable way to spend our first anniversary.

If you don’t mind sharing, I’d love to hear what others did for their first anniversary!