You only need one bowl and about 10 minutes to make the batter for this beer bread. It’s also flavored with bacon and cheese and it’s so delicious! 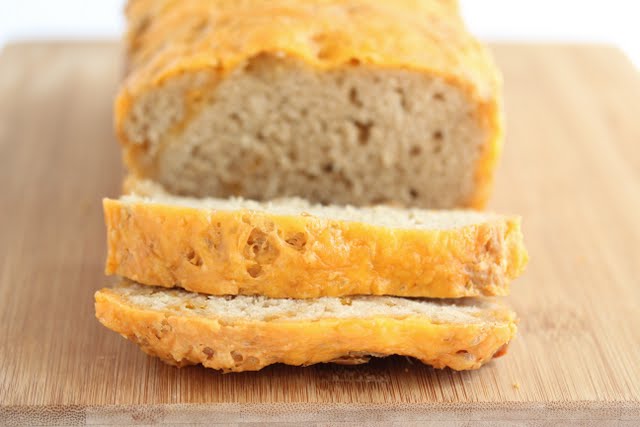 Beer breads are an easy way to make yeast breads without dealing with proofing and all the other traditional steps for yeast breads. Ever since I made a Honey Beer Bread last year, I love to make beer breads. They take minimal effort and have a wonderful aroma and taste that even non-beer drinkers can enjoy.

Cheese beer bread is one of my favorite variations and I’ve been wanting to make it for a while now and I don’t know why it took me so long! Well, I finally made it and I decided to make it even better by adding bacon bits. 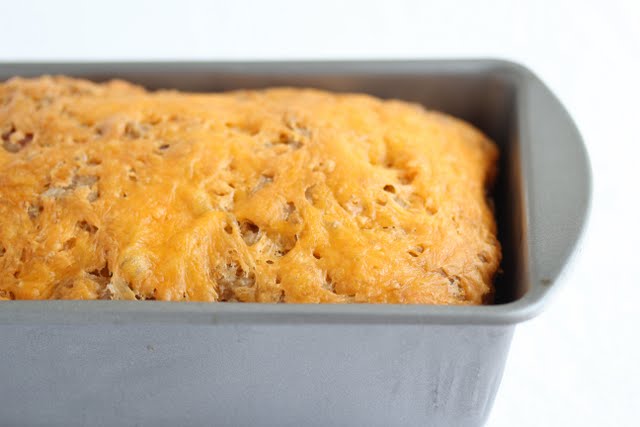 How to Make Beer Bread

Like I mentioned, beer breads are easy to make, don’t require any additional yeast or time waiting for the bread to rise. I love that you can use them like regular bread like I did for a Beer Bread Grilled Cheese Sandwich.

Beer is used as a leavening agent for the bread. You can definitely taste the beer flavor in this bread, but most of the alcohol evaporates during baking.

For this recipe, you can pretty much use any kind you like but make sure it is a beer made with yeast. I recommend picking a beer that you enjoy drinking because it will give the same flavor to the bread.

I’ve made other beer breads with different kinds of beer, like my Pumpkin Ale Bread, and it’s fun to switch them up to create new bread flavors.

I used shredded cheddar cheese for this beer bread because it goes really well with the beer and bacon.

One thing I learned the first time I made this beer bread: you definitely need to use precooked bacon. On my first attempt I used raw bacon and it simply did not cook enough even though the bread bakes for so long. I ended up with an unappetizing loaf filled with chunks of bacon fat.

So, be sure to use precooked bacon. I buy packages of precooked bacon at Coscto, but if you can’t find it go ahead and fry raw bacon first until it’s almost cooked. I like to finely chop the bacon before adding it to the batter Like I mentioned, the best thing about this bread is how easy it is to make the batter. Plus, you only need one bowl.

It’s as easy as whisking together the flour, sugar, baking soda and salt before adding the shredded cheese and chopped bacon. After that, all you have to do is add the beer and stir.

I baked my bread in a 9×5” loaf pan, topped it with some melted butter and the extra cheese and popped it in the oven. It takes about an hour to bake at 350°F. 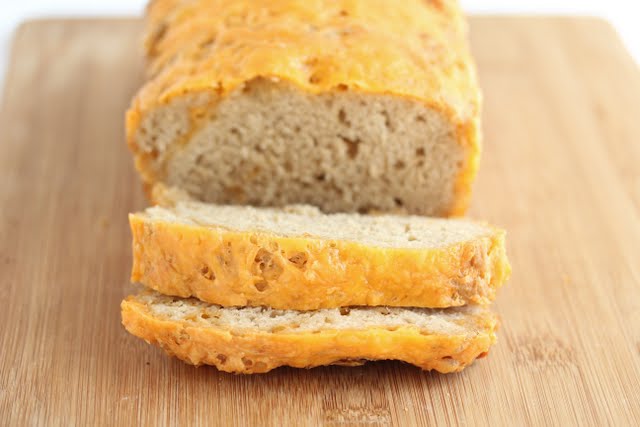 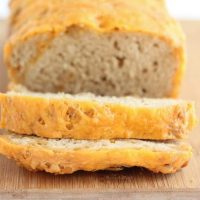 Servings: 10 slices (approximately)
Prep Time: 10 minutes
Cook Time: 1 hour
Total Time: 1 hour 10 minutes
Course: Side Dish
Cuisine: American
Quick breads are a great way to make bread without having to deal with yeast or kneading. This savory quick bread is one of my favorites - it's flavored with beer and has bits of bacon and cheese baked right inside. I like to sprinkle cheese over the batter so when it's baked you get a chewy cheesy crust.
5 from 1 vote
Print Pin Rate

Did you make this recipe?I'd love to see it! Mention @KirbieCravings and tag #kirbiecravings!
Posted in: Bacon, Bread, Recipes
10 Comments // Leave a Comment »