Hi everyone! I did a lot of eating and photo snapping this weekend, despite the heat (though some of my pictures didn't come out great as my treats were melting faster than I could snap photos!)  I'm excited to tell you all about my various eats this weekend, and I'll do so when I have some more time, but here's a quick one!

I went to Nijiya market for some ice cream mochi which were on sale.  You can read about my post on ice cream mochi here.  I also picked up some beautiful manju!  I previously blogged about Nijiya's wonderful offerings, including their mochi and manju here.

I selected this beautiful manju set that was available at Nijiya this past Sunday. 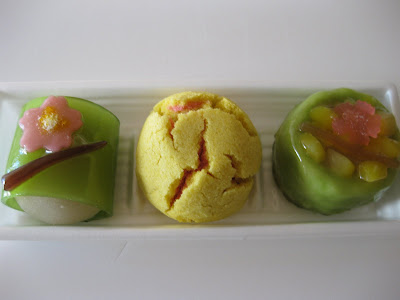 The colors were so pretty and perfect for Spring.

I think this one was the prettiest. 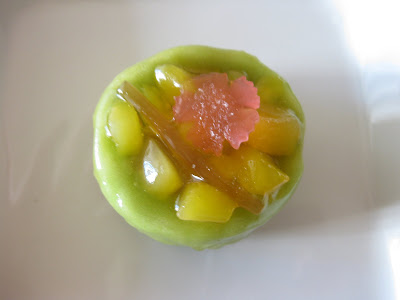 I love the different colors and the little pink flower.  The outside had a jelly coating that was sticky, which made this one hard to handle.  For those who don't know, manju is a japanese treat that is similar to mochi. However, the outside is not the sweet sticky rice flour that is mochi.  Instead the outside is usually some sort of non-sticky flour (so the outside is not chewy).  The inside is usually filled with red bean paste or some other sweet paste.  These treats are very sweet as the filling takes up most of the manju.  I prefer mochi better because I like the chewiness of the sticky rice flour, but there is much more you can do with manju in terms of designs and variations. I like to eat these treats a little bit at a time.  I can never eat more than one in a setting as they are so sweet!  They taste great with a pot of hot green tea, which help ease the sweetness.

When the cashier was ringing up my purchase, I noticed that the manju was rung up as Hogetsu.  I realized that these must come from the Hogetsu Bakery, which I first heard about from mmm-yoso.  I think there are several posts which mention this bakery, but the main post can be found here.  From what I have learned since, the bakery is run by an old couple, where the husband handcrafts these beautiful manju.  How impressive! I've been wanting to go, but the bakery is a little bit far from where I live, so I haven't had a chance.  I am excited to know that I can get some of their manju from Nijiya!  The location for Hogetsu is as follows:

Stay tuned for my post on the wonderful little Spring festival that was going on outside while I was inside doing my grocery shopping!