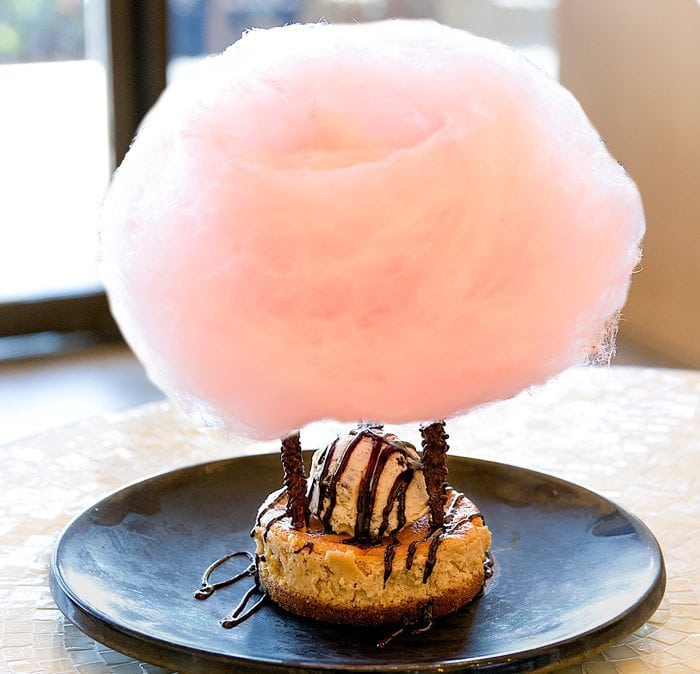 Blush Desserts has gone through several ownership and management changes since I first posted about them in 2014. The last few months the store was under renovation and then quietly started posting some new content on their Instagram page.

Curious, I stopped in one evening. While the layout of the cafe is still the same, the decor is quite different. Gone are the pink walls and pink seat cushions. The new look is more clean and modern. 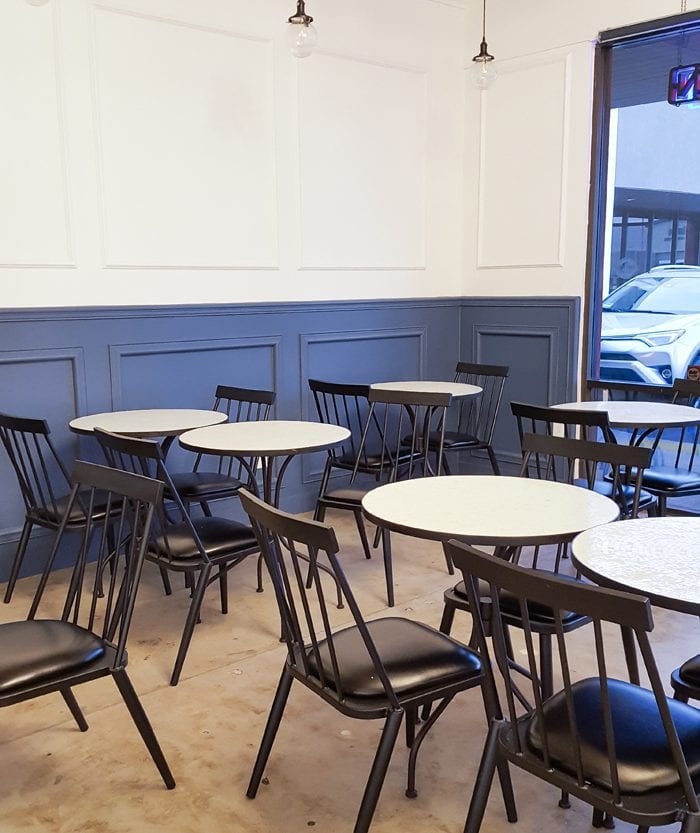 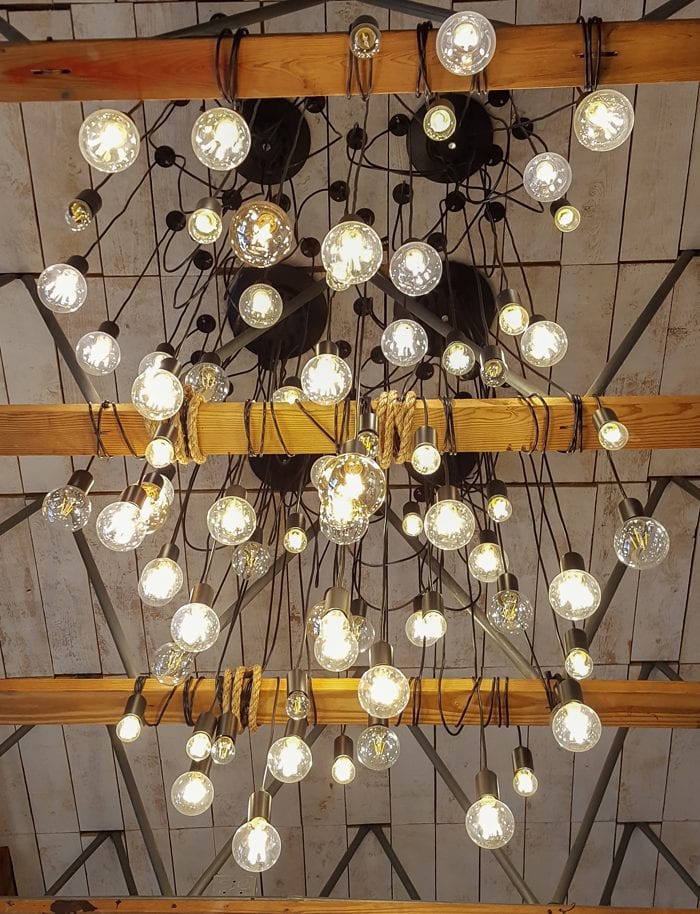 The nice gentleman at the counter told me that the cafe was indeed under new ownership and excitedly told me about the various desserts and drinks they had planned. I noticed that they had kept many popular items from the previous incarnation of Blush Desserts, including the macarons and macaron ice cream sandwiches. But there were also many new items. Because it was pretty late, they didn’t have many offerings left but I was able to purchase several flavors of cream puffs that caught my eye. 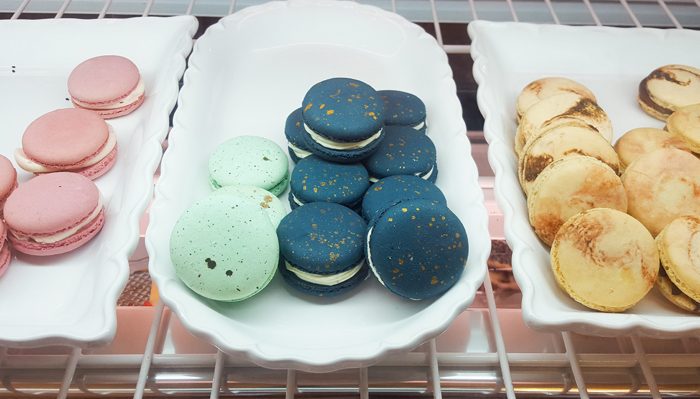 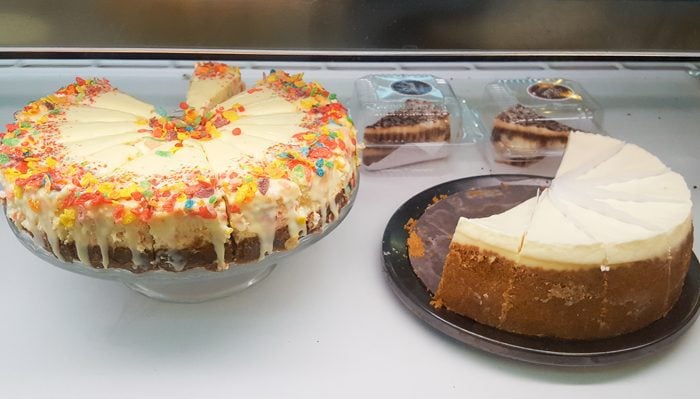 I was also told that they will be offering a 3-piece mini version served on a skewer, adorably called choux choux train, but that wasn’t yet available that evening. 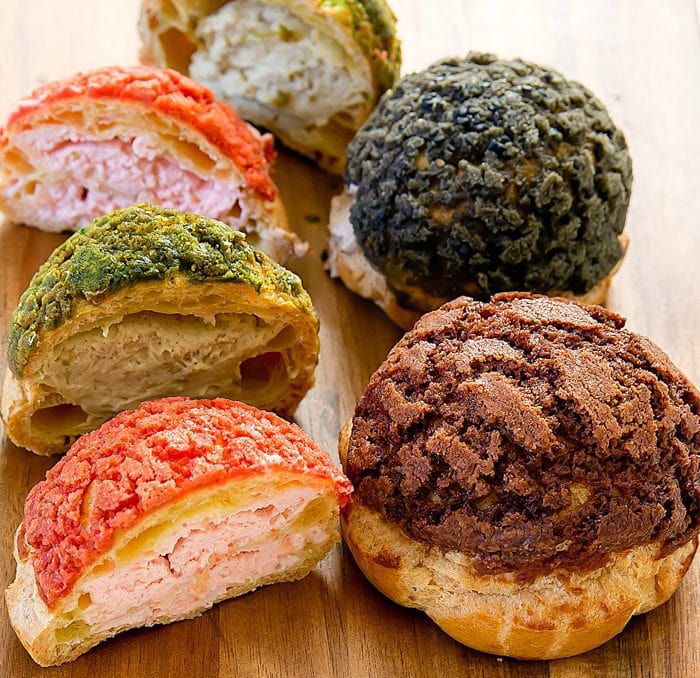 We purchased the cream puffs and ate them at home. The cream puffs were quite nice. I thought the choux pastry was well done, with its light crispy shell. I also liked the addition of the crunchy butter sugar crumb topping.

The fillings were true to their flavor and not overly sweet.

A few weeks later, I visited during grand opening weekend with my friend CC. We actually arrived a few minutes before the cafe was even open, but they were nice enough to let us order and sit down. It also meant we were able to take some photos without their being a lot of faces and bodies in the way. 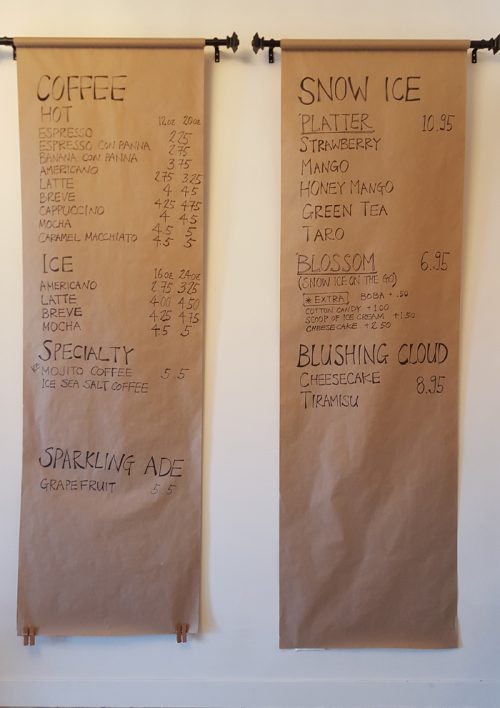 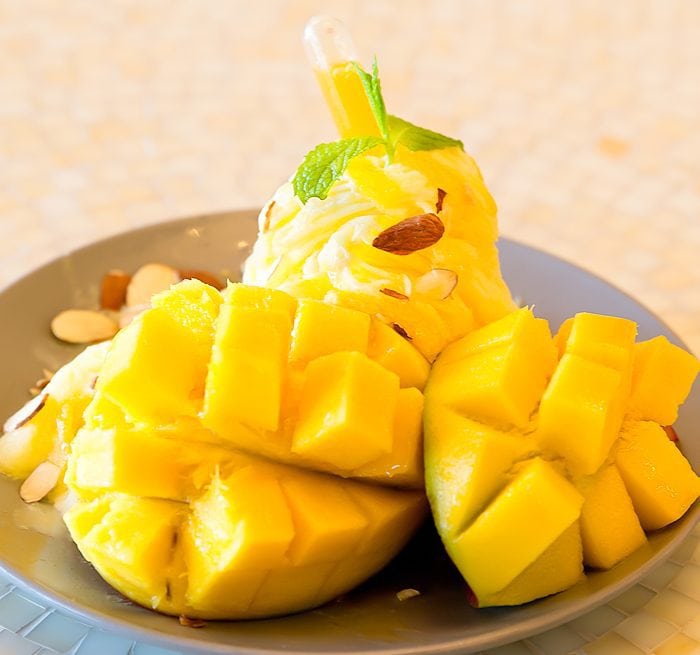 I was very interested in their shaved ice platters (they also have to-go versions called Blossoms that are served in a cup). And for their grand opening promotion, the plates were 20% off. We asked the employee which one was her favorite and she said mango, so that’s the one we chose. 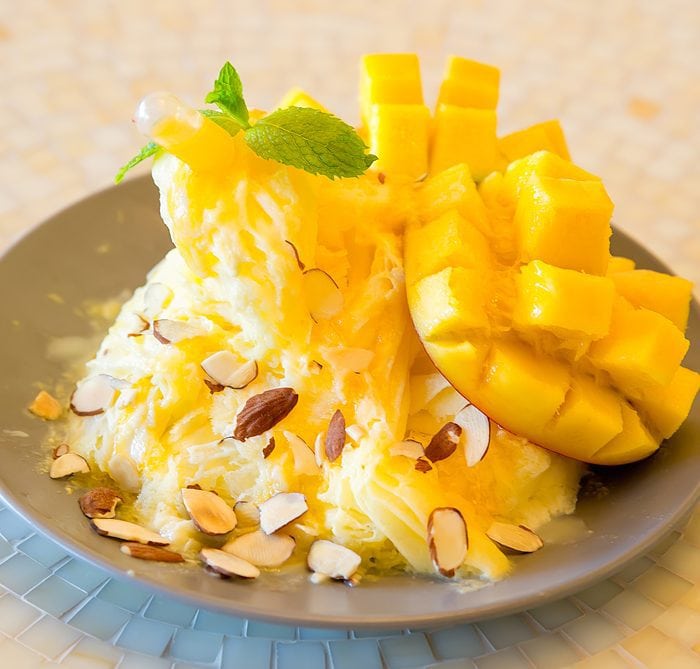 The platter was quite impressive, complete with two mango halves. The snow ice also had a little squeeze bottle on top to add additional mango syrup to the ice, though it didn’t really need it.

I found the ice to be a little too icy for my liking and the mango flavor tasted a little artificial. However, I did appreciate all the fresh mango and the one they served us was very sweet and ripe. 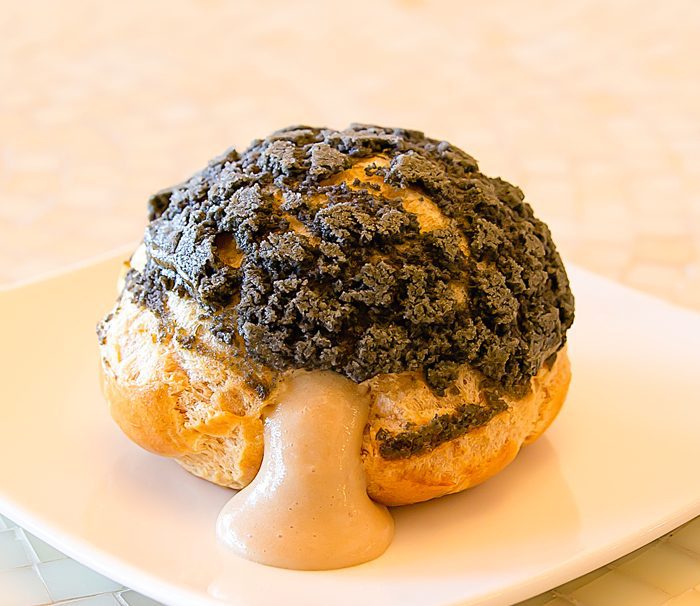 The cream puffs weren’t yet all ready but they told us we could order the matcha or earl grey ones. CC had really been looking forward to trying the earl grey one so we ordered that to share.

You could tell the earl grey one wasn’t more than few hours out of the oven. It still had that just-baked texture to it, which I really enjoyed. This puff was even better than the previous ones I had since I didn’t eat those right away. This one was incredibly light and airy, and the crispy crumb topping was delightful.

The filling hadn’t quite set, so it immediately began oozing out, but it was still tasty, with a subtle earl grey flavor. I’m sure if we had come back later in the day, they would have been set. 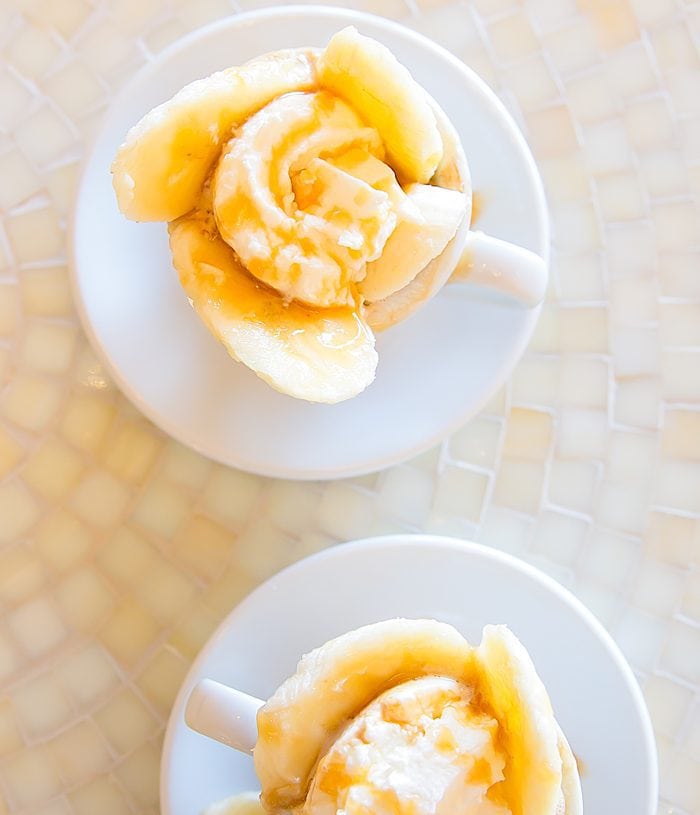 We originally ordered this and an iced mojito coffee to share. However, they brought us two of these, giving us one on the house so they wouldn’t have to waste the banana.

I found this presentation to be so cute, with the slices of banana on top resembling flower petals. I didn’t actually taste banana flavor in the espresso itself, but I enjoyed the drink overall. 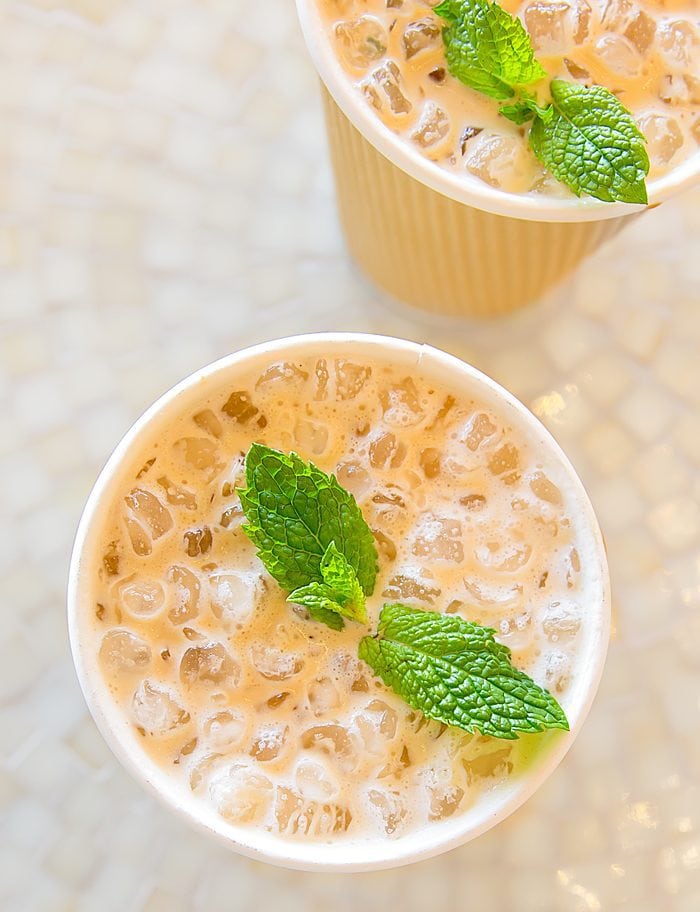 After the banana con panna, we decided to cancel the mint mojita, but they ended up making it for us anyway.

The ice mint mojitos reminded me a lot of the ones served at Philz Coffee, even using a heavy cream to make it extra creamy. I really liked the look of the pebble ice and I enjoyed how creamy the coffee was. It doesn’t quite replace Philz, but it was a nice refreshing drink on such a hot day.

At this point we were quite full, but then the owner had just come in and he chatted with us a little bit. The staff had seen the photos we were taking and he offered to make us their signature dessert, Blushing Cloud, since we hadn’t ordered it.

CC she must be good luck because whenever I dine with her, we always end up getting offered free items for one reason or another, which doesn’t happen when I’m with Mr. K.

I’m so glad that we got to try this dessert because it is so breathtaking.

Cotton candy topped desserts have been quite trendy these past few years, but I’ve never seen something quite like this.

On the bottom is a tiramisu flavored cheesecake. It’s topped with an ice cream flavor of your choice (I chose cookies and cream). It has three pocky sticks acting as dowels/support beams to hold up a blushing pink cloud of cotton candy. It looked so ethereal, like it could float away at any moment.

The cheesecake was light and not too sweet. I quite enjoyed it and brought home the leftovers for Mr. K who also liked it.

Overall, we had a very nice visit at Blush Desserts. The new owner and staff seem very friendly and full of creative ideas and I’m looking forward to seeing what else they come up with. I’m glad I was able to check this place out with CC and the extra dessert and drinks were an unexpected but nice gesture.