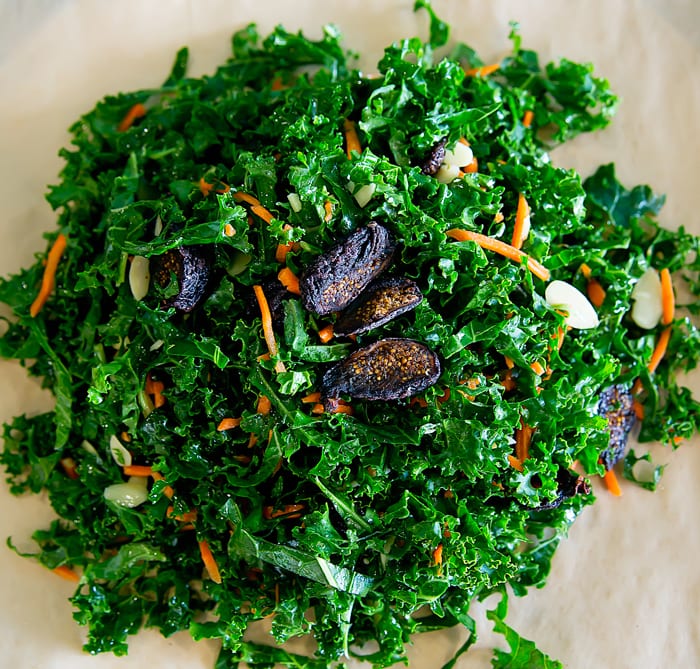 Normally I’m not a big salad person, but it’s the start of a new year and I was intrigued by a few of the salads that had an Asian spin to them. 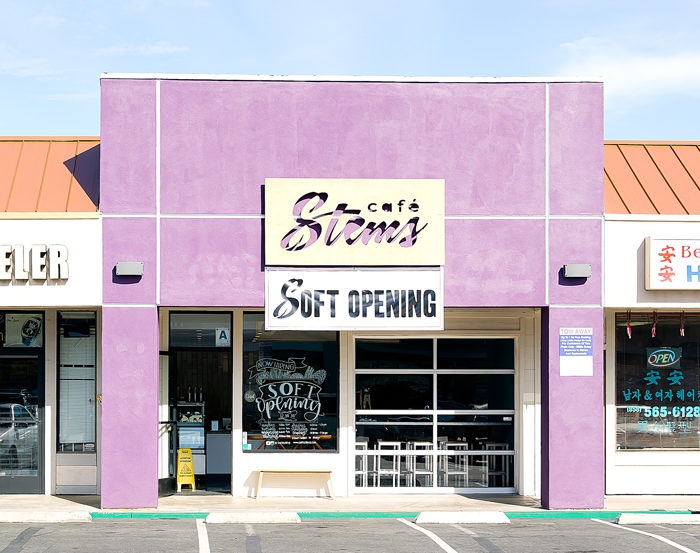 I went in on a Sunday with my good friend and fellow blogger caninecologne (“CC” for the rest of this post).

Because the restaurant is still in its soft opening stages, the menu is limited. They offer a few different salads (plus a build-your-own option), smoothies, acai bowls and onigiri (Japanese rice balls). 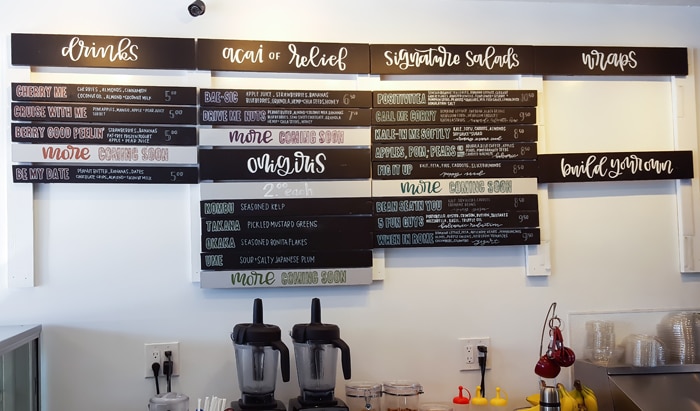 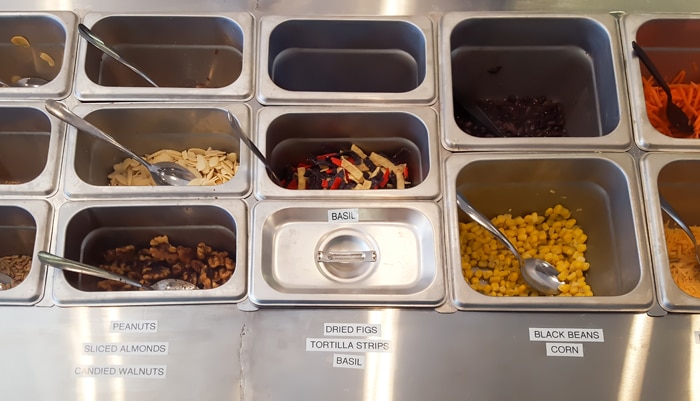 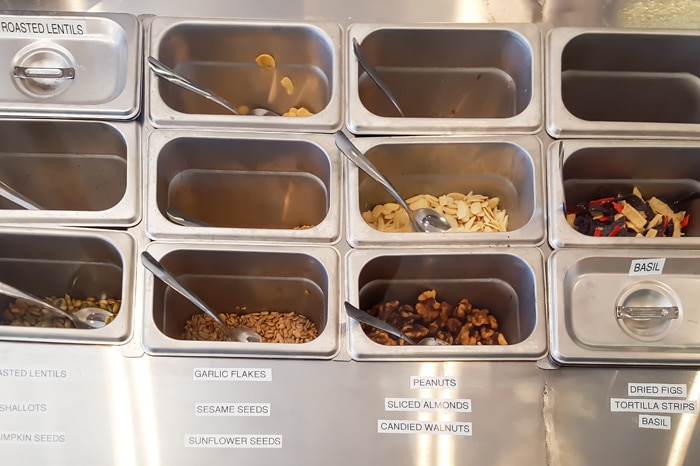 We went in early so the restaurant was still fairly quiet. I do like what they’ve done with the space. 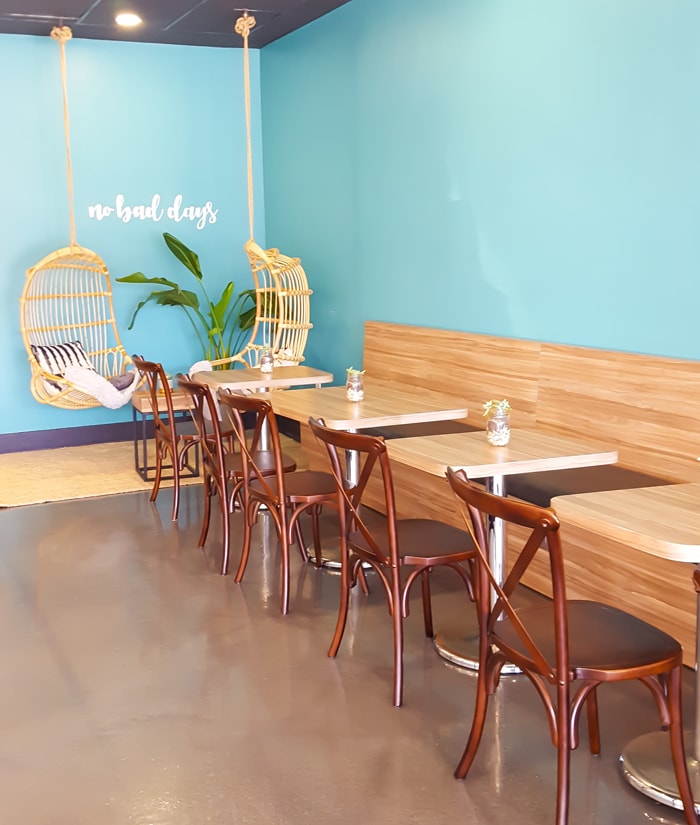 On Sundays, they have a buy 1 get one half off on salads. We took advantage and decided to get four salads! Between the two of us, we actually ordered the majority of the menu. We also tried all the rice balls currently available. 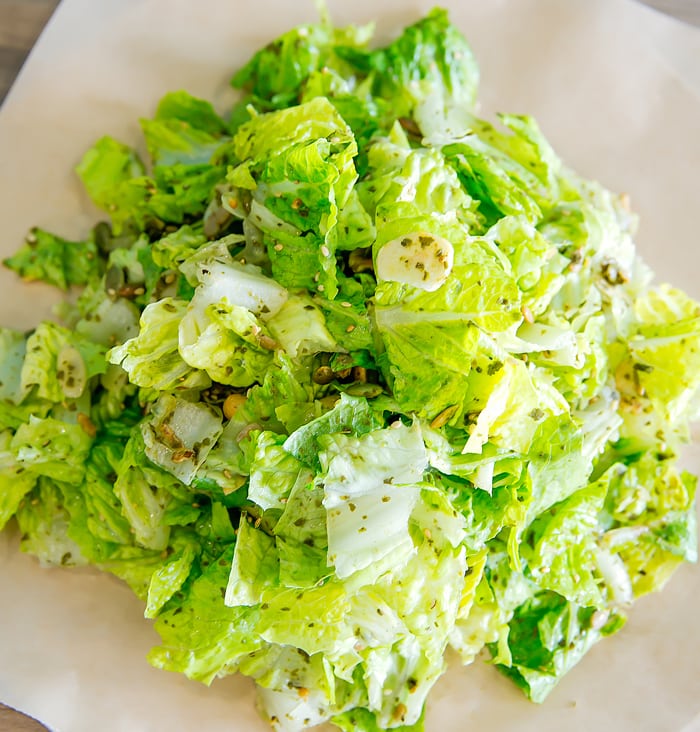 The sencha tea leaves are fermented for three days and then tossed in with lettuce and various seeds and nuts which add crunch and texture. 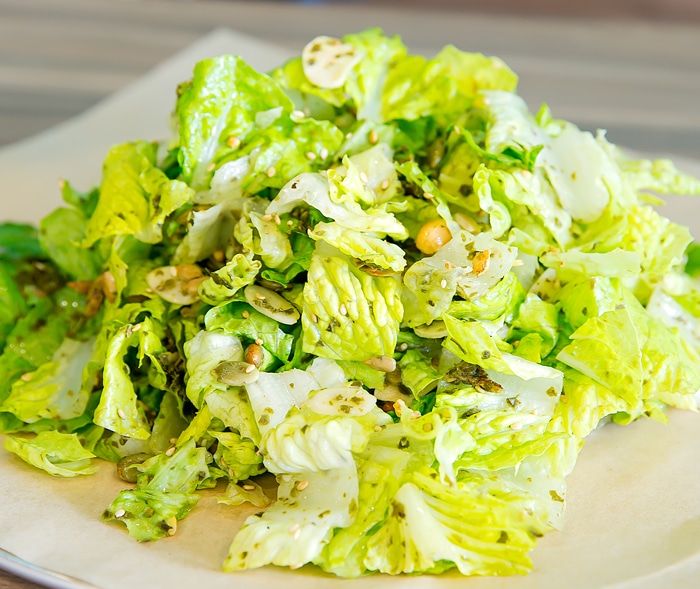 I found the salad to be quite light. I actually wished that the flavors were a little bolder. But I think the lack of shrimp paste and use of a vegetarian fish sauce (to keep the salad vegetarian) kept the flavors lighter. CC thought it was a nice and light twist on the traditional version. 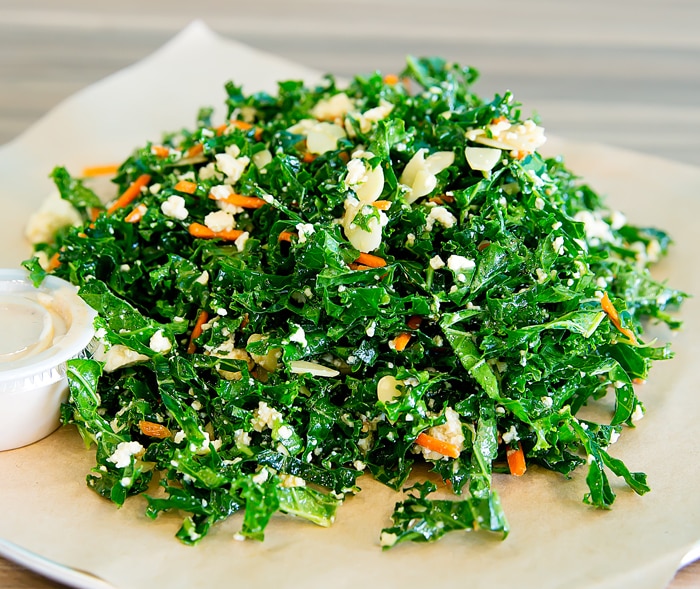 This was my favorite of the four salads and one I’d get again and again. The salad has a Japanese twist with the use of creamy sesame dressing and the crumbled soft tofu paired surprisingly well. 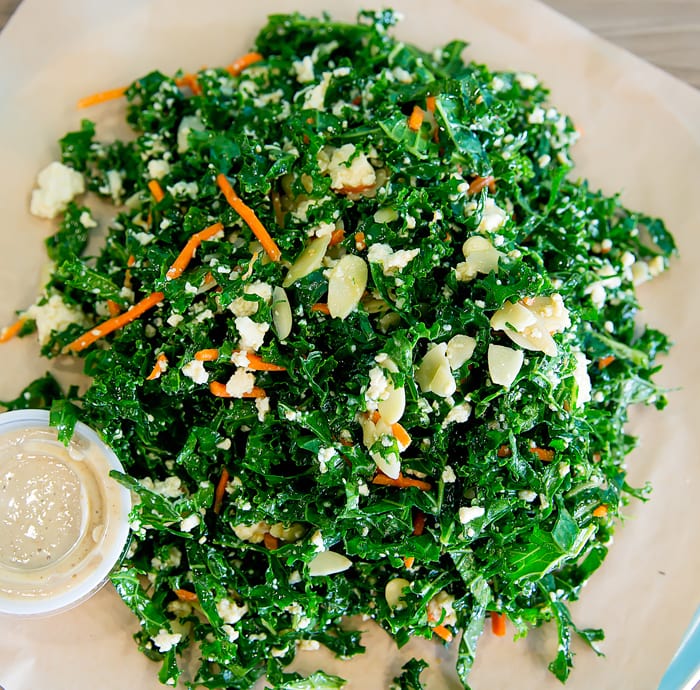 It’s hard to tell from the photos, but each of these salads are huge. I saw photos on Instagram before my visit, but they look much bigger in person. They are served on round pizza pans lined with paper.

I got a kick out of the name too. Not only was it a clever play on words and phrases, but it described the salad quite nicely because the salad is very soft. The kale leaves are first tossed in oil and lemon juice which softens them so they aren’t as hard to chew (I do this for my raw Brussels Sprouts salad but will now try on kale next time).

It was hard for me to taste the dressing properly as it kept separating even after we tried to mix it up. I couldn’t really taste the poppy seed flavor. I did enjoy the dried figs. We opted to not add the feta cheese since neither of us really like feta. This salad tasted fine but wasn’t quite as unusual as the two above. 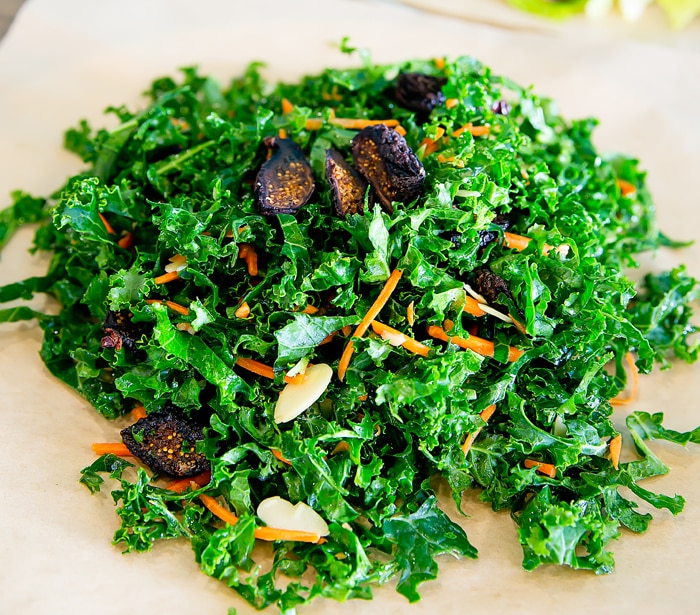 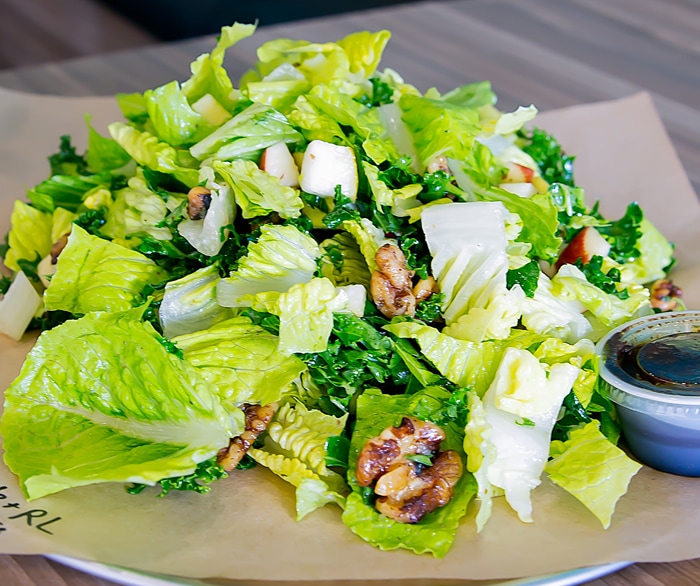 This salad is usually made with arugula but they didn’t have any available so they substituted with romaine and kale. We opted to skip the blue cheese. 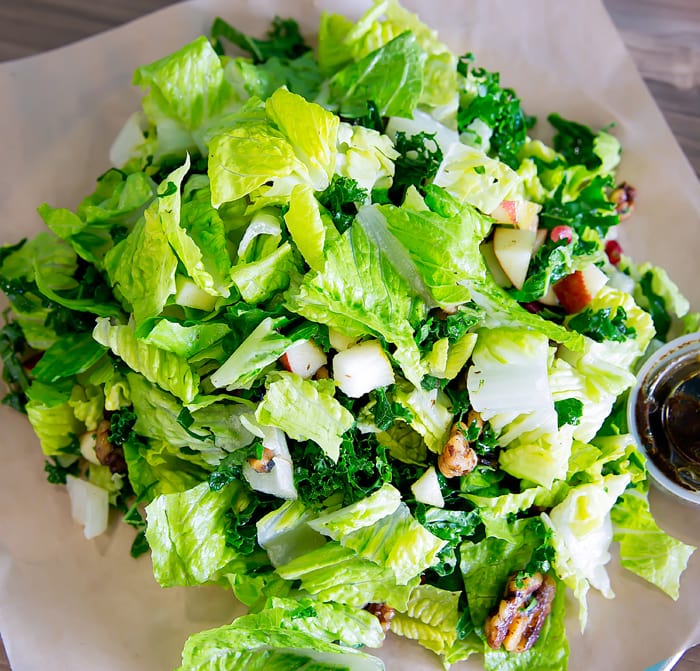 While I enjoyed components of this salad, this one didn’t quite wow me either as it seemed similar to other salads I’ve had. 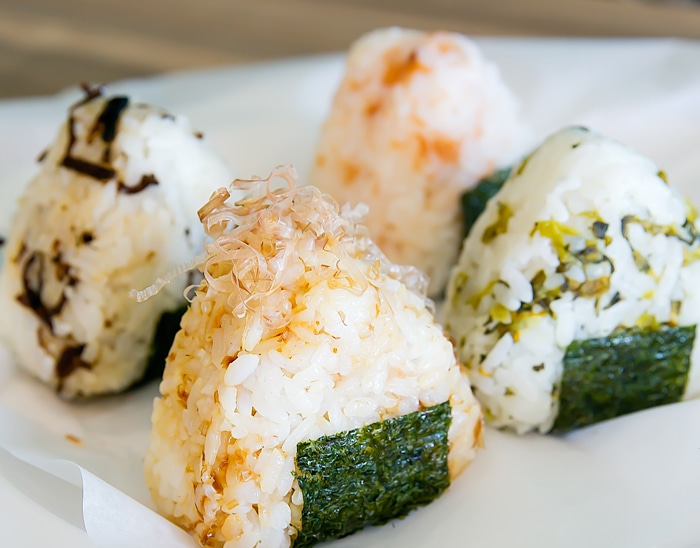 They currently have onigiri on the menu so we ordered one of each. Since we were one of the first customers that morning, these were made after we ordered so they were quite fresh. 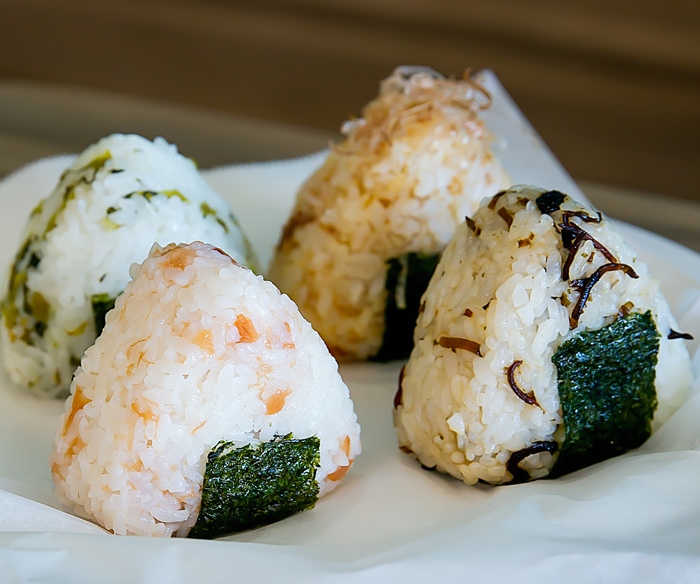 Of the four, my favorite was the Ume, which surprised me because it’s usually my least favorite. Most of the ume ones I’ve had consist of a rice ball with only the ume in the center. Here, they chop the ume and mix it into the rice. Not only does it make for a prettier rice ball, but the salty sour flavor of the plum is more evenly distributed throughout the rice ball.

As we were finishing up our meal, the owner came to chat with us to see what we thought of the different dishes. At one point I asked what other onigiri they would be offering and he mentioned that they would be serving a salmon and a tuna. And then he offered to make us one to try. 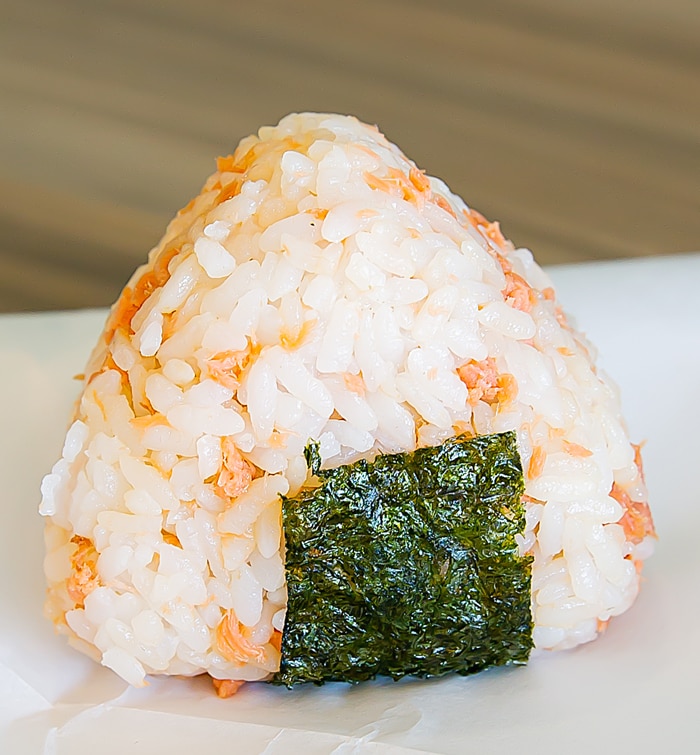 He made one for each of us so we didn’t have to share. These were still warm and quite good. The fish was salty on its own, but was a good balance mixed with the rice.

Overall, we had a pleasant meal here. I’ll have to come back after the grand opening (January 22) so that I can check out more menu items. I’m really curious about the 5 FUNGUYS (5 mushrooms!) salad. Currently they are open everyday except Saturday. On Fridays they have a “bring a friend” and buy 1 get one half off smoothie bowls. On Sundays, they have a buy 1 get one half off on salads. The salads are huge here and I think it’s nice to have a healthy option in this area. 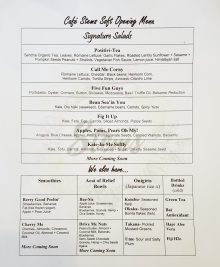