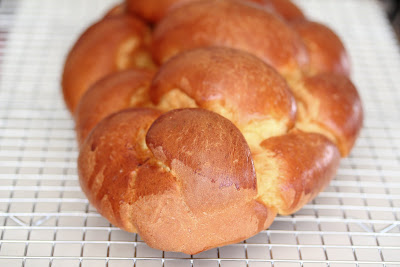 After making the braided milk bread last week, I really wanted to try my hand at making challah bread. Challah bread is a soft, egg bread that is eaten by Jewish people during certain holidays. I’ve seen different styles of the bread, but my favorite shape is the six strand braided version. 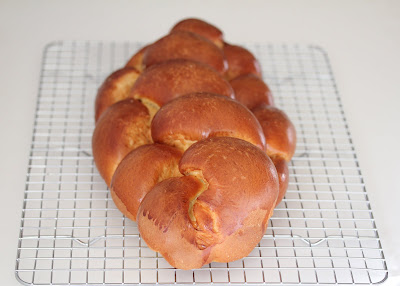 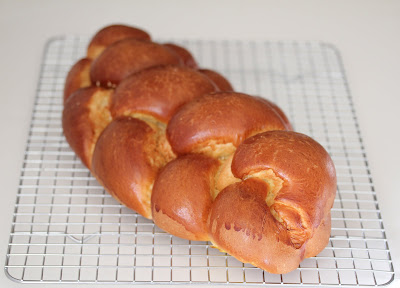 As I set about researching how to braid the bread, I remembered that my brothers used to make challah bread all the time when they worked at a bagel store. So this first time around, I cheated, and enlisted their help. I should have taken some step by step photos, but forgot. I’ll do it next time.

The challah breads I’ve eaten have always been adorned with sesame seeds. We put some on initially, but then I didn’t like how they looked. I liked the bread better without the seeds. Also, the seeds kept making a mess when I was taking pictures and kept dropping on the floor. Since I was watching little bro’s girlfriend’s adorable little puppy during this, I decided to take off all the sesame seeds, so the puppy wouldn’t eat any that fell. Of course, by the time I realized the sesame seeds had made little indents in the bread, it was too late. 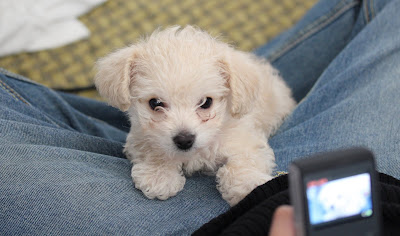 For the recipe, I chose this one. Since I’ve never made challah bread I didn’t want to tweak around with the recipe. The only difference is that I didn’t do the double braids. Instead we did the braids similar to this video. 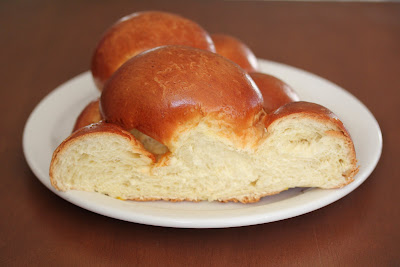 The bread came out super soft. I’ve read that the bread makes good french toast so I plan on trying that. It also makes great sandwiches. 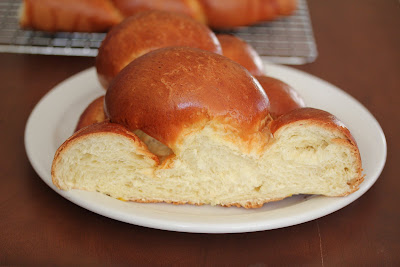 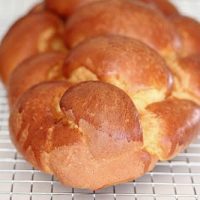 Servings: 1 loaf
Prep Time: 40 minutes
Cook Time: 30 minutes
Total Time: 1 hour 10 minutes
Course: Side Dish
Cuisine: American
Challah bread is a soft bread made with eggs and it’s great for making sandwiches or French toast. There are different ways to braid a challah and I followed the steps in this video, which I’ve also linked in the instructions.
Print Pin Rate

Did you make this recipe?I'd love to see it! Mention @KirbieCravings and tag #kirbiecravings!
Posted in: Bread, Recipes
8 Comments // Leave a Comment »

« Previous PostSprinkles Cupcakes
Next Post » Do Re Mi House revisit