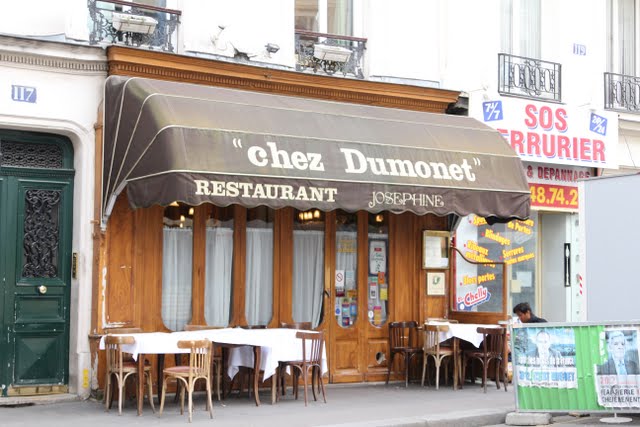 DH and I recently returned from our honeymoon, otherwise known as the most exhausting vacation we’ve ever been on. We’re now in recovery mode, but already I miss the food. During our short trip we managed to hit Paris, Rome and Florence. We took over 100 gb of photos, so I have a lot to share.

I’ve wanted to go to Paris for as long as I can remember, so our honeymoon was a great excuse for me to finally get my chance to visit. While we had many amazing meals in Paris, my favorite one by far was at this little old world bistro known as Joséphine “Chez Dumonet”.

Researching for Paris was hard. There was an abundance of recommendations, sources I wasn’t so sure of, and I had limited time for research due to my upcoming nuptials. Luckily for me, Cathy of gastronomyblog was visiting Paris a few weeks before me and generously shared her itinerary.

While making my reservations for our meals in Paris, I learned a few things. First, most restaurants are closed Sundays and Mondays making it quite hard to fit in all the meals I wanted. Second, Parisians eat late. Most places didn’t even open until 7:30 and it’s quite common to eat around 9 or 10.

We arrived early to our reservation, only to find to the restaurant not even open. There wasn’t much wandering to be done because all the surrounding shops closed at 7, but finally we went back at 7:30 and were seated. Despite making reservations weeks in advance, and the dining room being completely empty when we arrived, we were told the only seating available for us was in the back of the restaurant by the kitchen. Since we didn’t have much of a choice, we agreed, and I thought it’d be nice to see the cooking in action.

What the head waiter failed to mention was that next to the kitchen also meant next to the restrooms. At least we were seated across from the restroom and not right next to it. We soon learned that this seemed to be the little room for foreigners. Everyone seated in our section were foreign like us, and despite complaints, they were not given better seats either. This sort of behavior though was something we got used to and experienced through much or our stay in France and Italy.

The meal started with a complimentary glass of white wine. It was light and fruity and a nice way to start the meal. 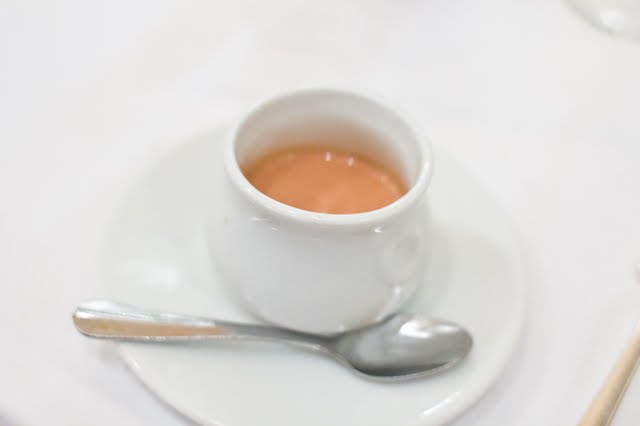 We were then given a complimentary cup of cold gazpacho soup. I’ve never been a fan of this soup but DH loved his. 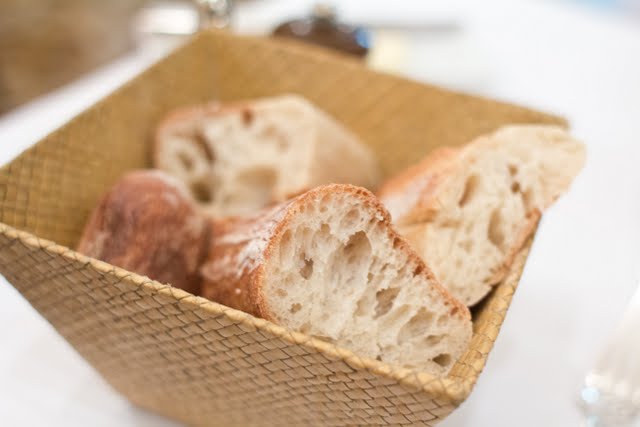 No meal would be complete without some crusty bread. We were so hungry that we devoured the entire basket. Unlike the US, instead of the basket being taken away, it was promptly refilled so we had fresh bread all night long. 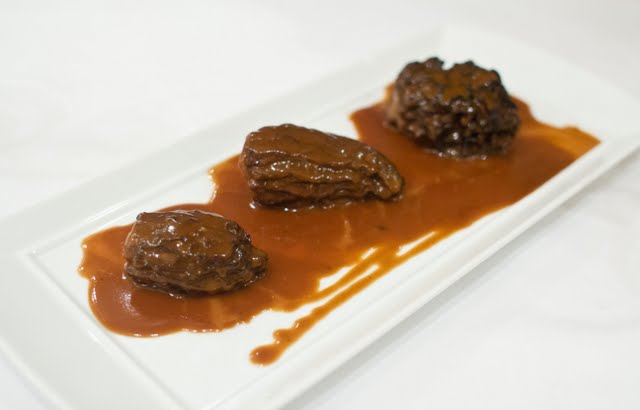 With the menu being in French, we relied on our waiter for recommendations. He recommended this starter, mushrooms stuffed with foie gras and ground meat. 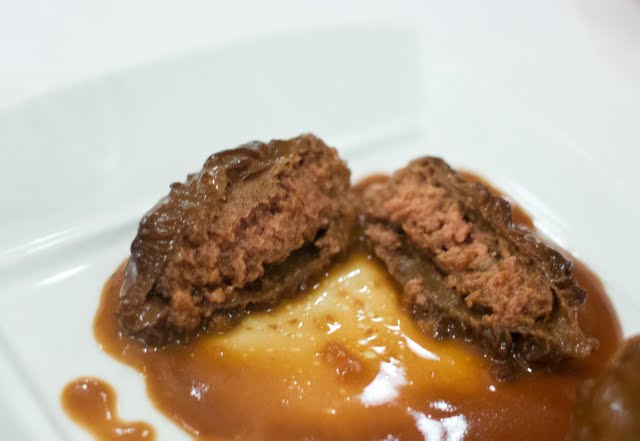 I found the sauce a little too powerful, but DH enjoyed it so much he mopped up the gravy with bread. 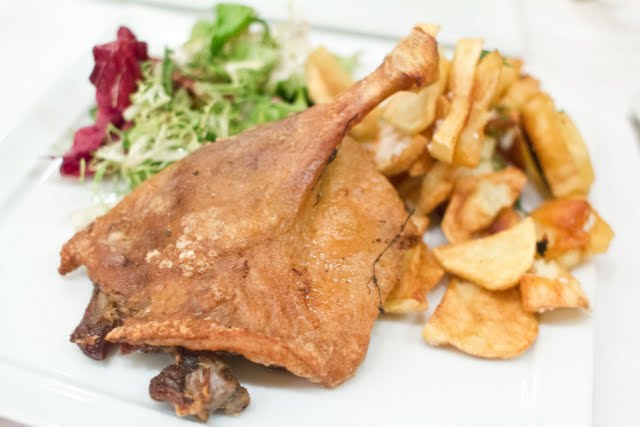 When I had researched Chez Dumonet, everyone raved about the duck confit, so of course I had to try it. I was surprised to find that it was one of the cheapest entree items given the popularity of the dish.

The confit was everything I had anticipated and more. The skin was perfectly crisp, a cross between fried chicken and crackling pork skin. I’ve never had duck confit with such a perfectly cooked skin, with most of the fat rendered off. The duck meat was wonderfully moist. Normally DH doesn’t even like eating duck, and he loved my dish and kept stealing off of my plate. The entire time I was eating it, I had thoughts running through my head like: I’ll never be able to order this dish again at another restaurant. How do I get another one of these? Can I order it for dessert?

Throughout the night, I would be able to peek into the kitchen while the chef masterfully cooked the duck confit. Every time another one was made, I was so tempted to reach over and grab the plate. 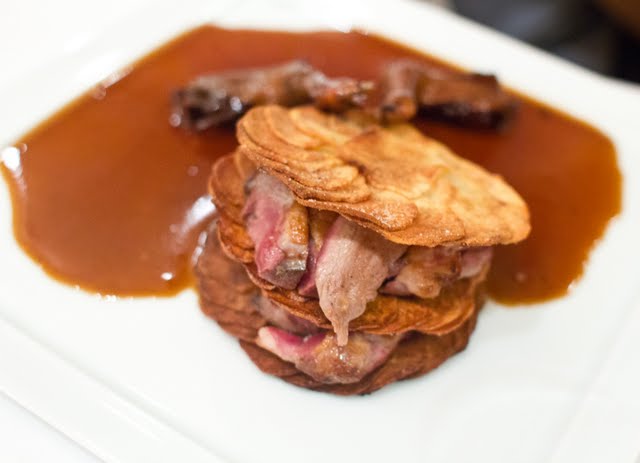 This was another recommendation given to us by our waiter. Normally DH avoids the gamey meats so I was surprised he chose to order this. I didn’t have high expectations going in, but I was very impressed. The pigeon breast meat was served raw and slightly seared. It’s the first time I’ve eaten pigeon this way and I was amazed by the flavorfulness of the meat. The only part that was fully cooked were the two small wings, also perfectly prepared. The only part of the dish I didn’t like were the layers of crisp potatoes, which were slightly burnt. 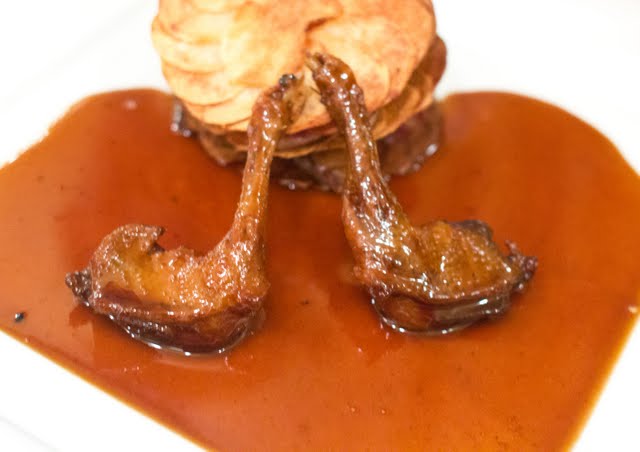 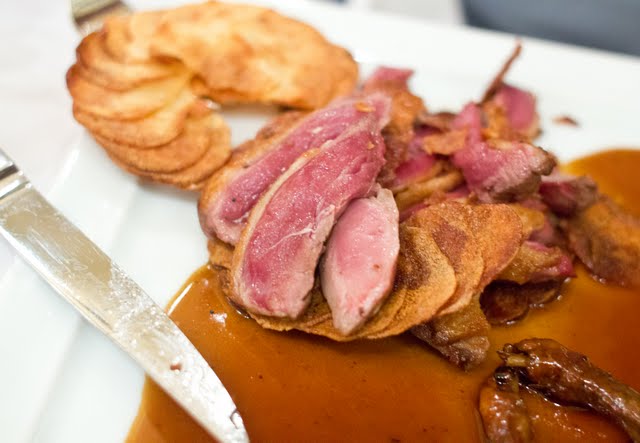 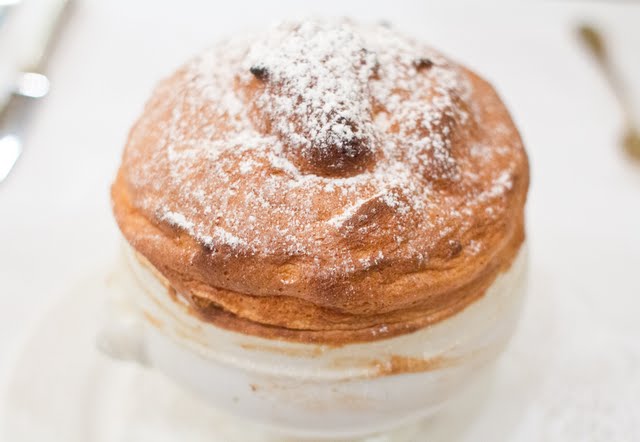 My research had also told me to order the Grand Marnier Souffle which I was told was insanely big. While it was quite large, I guess I expected something even bigger given the descriptions I had read. I was really surprised by the very strong taste of grand marnier. While I like a little alcohol in my desserts, this was too overwhelming, and created quite a bitter taste to the dessert. We ended up not eating most of it. This was the one miss in our night.

Another thing we learned from our dining experience here was that when you dine in Paris, they don’t give you the check until you ask for it. We learned this the hard way as we sat for almost an hour. It’s considered rude to hand a check to the diners and rush them to leave. I really like this custom. Once we learned the rule, it was fun to be not rushed during future meals and being able to spend time trying to polish off our wine or just enjoy our night.

All meals in Paris already include tax and service. It was a little complicated to understand at first and it also felt odd not tipping at the end of the meal. Several posts I read suggest that for a nice meal, you can leave a small tip even though service is already included, so that is what we ended up doing.

Despite this being a bistro, the meal was not by any means cheap. But we soon learned that this was how it is in Paris. I definitely had a love and hate relationship with Paris. One minute I would be complaining about the extraordinary prices and the next minute I’d be in love again as I took a bite of croissant or some other heavenly food.

We thoroughly enjoyed our experience here and I expect to see it on my list of top meals of the year. We did have one minor issue though. I mentioned we were seated near the bathroom. Customers entered and exited the bathroom throughout the night, but at some point the door leading to the individual bathroom stalls was left open by someone. After that, it seemed like everyone just left it open. No one on the staff seemed to notice. Then, right after DH went into the bathroom, the head waiter noticed and was absolutely livid. He cursed (not sure at who, but I was hoping he didn’t think it was DH) and slammed the door shut so hard that it actually was stuck and couldn’t properly close again after. It definitely startled me and the poor customers that were sitting next to the bathroom door. After that, the guy sitting by the bathroom door made sure to immediately close the door when someone left it open. On the bright side, it was a great conversation starter to meet the couple sitting next to us and they helped advise us on the tipping and requesting the check.