Ever since Kirk of mmm-yoso reported that a Chin's was opening on Convoy back in March of last year, I watched the progress quite intently.  But as the months passed and still no opening, I began to think it was never going to happen. Then one day, I didn't even bother to look and I heard Boyfriend say "Chin's now open."  I couldn't believe it! At first I thought he was just joking because he does that a lot, but sure enough, it was open.

That evening I stopped in and browsed the menu.  I already had dinner plans so I couldn't eat there that night.  The waitress I spoke to was really great at promoting the place. I inquired about whether they would have chinese breakfast on weekends like the Chin's on Miramar and she said they would have it in about a month.

So I thought I would have time to go visit, but things just kept coming up.  I read Kirk's first quick look which got me more excited, but I just couldn't find any time to go eat a meal there.  It was ironic really. I waited so long for it to open, and then it took me about a month after it opened before I had time to try it.

This past Saturday, I was determined to go.  Boyfriend and I planned on going for a small lunch but when we sat down, I saw that they now have the weekend breakfast menu just like the one on Miramar!! I was so excited, so of course we had to try some of the breakfast items.  Since there was only two of us, we didn't get to try nearly as many things as I wanted to.

I wanted to snap pictures of the menu but I felt a bit self-conscious because the staff was constantly coming over.  Being still in its early opening stages, Chin's Convoy was absolutely buzzing with service.  We were constantly being checked on throughout our meal.

The best part was that we got to meet Chin!  The guy that owns almost all the Chin's.  He took the time to stop at every table and speak to his guests.  I had quite a few questions for him.  I learned that he is the sole owner of the majority of the Chin locations.  Here is the business card of the ones he owns: 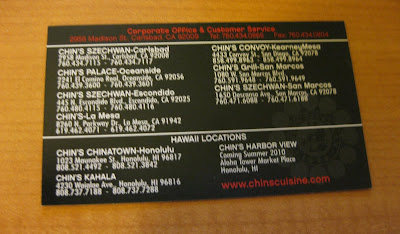 He is still has some shares of interest in the Miramar location, but has sold off most of his interest in it.  (I had read from Kirk's blog that the Miramar location was really trying to distance itself from the Convoy one, so this kind of explains that.)  He told me that they had actually been ready to open back in October but that they didn't open because he was busy with the Hawaii locations and he wanted to personally be around for the opening of the Convoy one, to make sure that everything went well.

We chatted a little bit about the main chef, who used to be the chef at Mandarin Garden in Mira Mesa.   The set up of Chin's Convoy is very similar to Chin's on Miramar.  They have both a more "Americanized" menu and a more "authentic chinese" menu.

This location is a bit smaller though for regular seating.  They also have some seating on the patio. There is also a bar area. 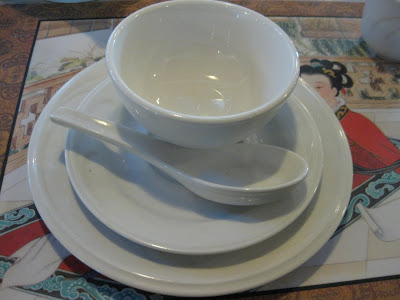 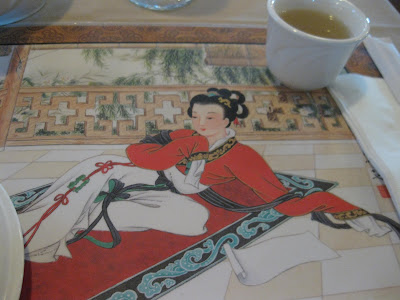 The weekend breakfast items are very similar to the ones offered at the Miramar location.  I didn't study the menu that carefully, but almost everything was on there.  The breakfast menu looks smaller as it is only one page, but I think it's because some of the items like all the noodle soups are already listed on their regular menu and not listed as part of the breakfast items, whereas on the Miramar menu, they are all listed on there. I have only eaten at Miramar for a non-weekend breakfast meal once, so I really don't know how similar or how different the regular menu is.

We started with a fried crueller (yu tiao), and some warm sweet soy milk.  The fried crueller was crispy and large.  Slightly too oily, but in general, pretty good.  The sweet soy milk seemed to be missing something for me.  It tasted fine, but I like the one at the Miramar slightly better. 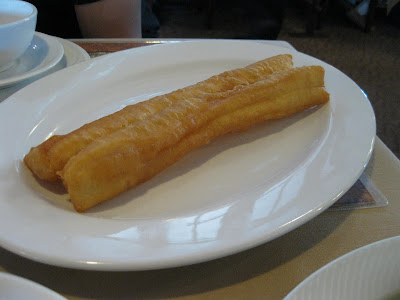 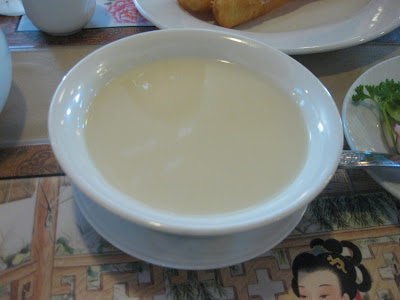 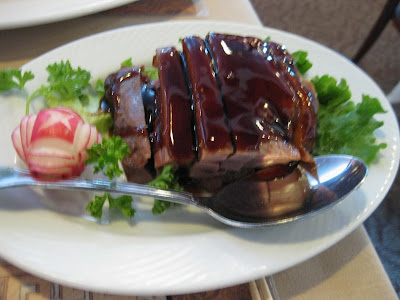 This dish was just alright for me.  I couldn't really taste the duck, so that was a bit disappointing since I love duck. 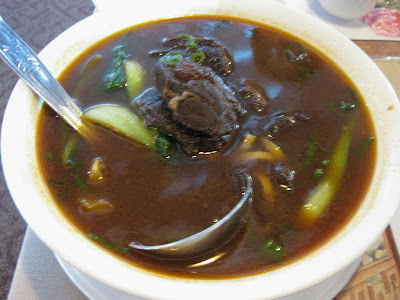 The bowl that arrived was pretty big.  I forgot to take a picture of the noodles. I've always enjoyed the beef noodle soup over on Miramar but haven't been a big fan of the noodles.  The noodles here are thicker and have a slight chew to them, which I think is what is needed in beef noodle soup.  Boyfriend still wished for the thick, homemade noodles of A&J, but I thought these noodles were good enough.  The broth was spicy and had another flavor that I quite identify.  It's not something I'm very familiar with, but I liked what it added to the soup.  The broth here doesn't taste the same as the one on Miramar.  I personally like Chin Convoy's version slightly better.  I also liked that they used bok choy. Chin, the owner, said their beef noodle soup is the best.  I was pretty happy with it.

Finally, we ordered some pan fried dumplings. The dumplings are homemade.  Our dumplings were huge. 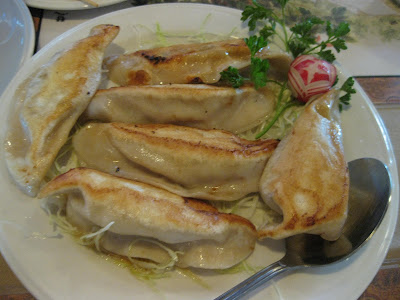 Each dumpling was double the size of a typical dumpling.  However, I didn't love them.  The skin wasn't very chewy and the filling was more like the filling you usually find for frozen prepackaged dumplings. They weren't bad but they didn't stand out either. Perhaps I've been eating too many dumplings from the Monterey Park area.

All in all, it was a pretty positive experience.  I can't wait to go back with my siblings so that I can try more items.  The chinese-style breakfast is served Saturday and Sunday until 2:30.