Chin’s- The other chinese breakfast spot

Chin’s in Miramar is a chinese restaurant which is located next to a Holiday Inn.  At first glance, I was doubtful as to its authenticity.  It had a panda on it which reminded me of Panda Inn and it was located next to a Holiday Inn.  However, Chin’s manages to cater to both an American audience and a Chinese audience.  I have only been there once for dinner, but found the items I ordered to be very authentic tasting.  Most of the time I go is for the weekend breakfast, and this review is of the weekend breakfast.  Apparently this restaurant is a chain, but I’ve never been to the other locations.

Chin’s serves traditional Shanghai and Taiwan breakfast items on weekends from 11-2:30.  I had been sorely missing Chinese breakfast ever since New Shanghai closed a few years ago.  While I don’t think Chin’s is as good as New Shanghai was, it’s the only place that really serves so many chinese breakfast items in SD and so I don’t have much choice when I’m craving chinese breakfast.  Typical items include soy milk, fried chinese donut (yiu tiao), various dumplings and noodle dishes.  The menu is somewhat limited, but does include most of the favorites.  The prices are a little bit cheaper than if you were to order some of these dishes during non-breakfast hours, however still a little on the pricey side in my opinion.  The menu is in Chinese on one side and English on the other.  They give you an order sheet to fill out what you want.  The order sheet is only in Chinese.  If you don’t know Chinese, the staff is very helpful and will fill out what you want for you.

This place tends to be very crowded during breakfast hours, so I suggest coming either right at 11, or late, around 1-1:30.

Some of my favorite dishes are as follows: 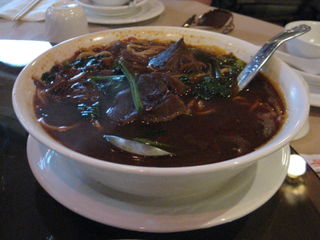 The beef noodle soup.  Not as good as some I’ve had at places outside of SD and a little on the pricey side, but probably the best I’ve had in SD.  The broth is rich and a little bit spicy.  The meat is flavorful and tender, and the portions are pretty generous. 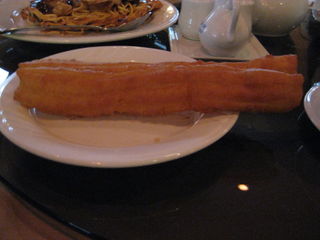 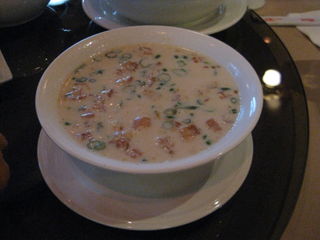 Chinese donut.  Again, not the best I’ve ever had, but probably the best tasting one in SD. Best eaten dipped in soy milk, either sweet or salty depending on your preference.  Sweet soy milk is served warm.  It’s not too sweet and tastes pretty good.  Salty soy milk is more like a soup. The salty soup is pictured here.  The soy is cooked to have the consistency of tofu.  The soup tastes a bit like salty tofu soup and has bits of fried chinese donut in it, usually still crunchy.  Traditionally, chinese donut is eaten with this outer biscuit (siao bing).  However, the one here doesn’t taste that great.  It’s thin and a bit dry.  You can order the chinese donut by itself or with the biscuit, so I usually opt to order it by itself. 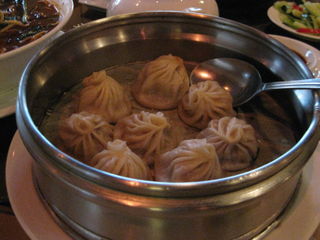 Small pork dumplings.  These are usually pretty good, though this last time I was here, they were on the dry side. Usually the dumplings are filled with a soup and are to be eaten hot with the soup still inside.  This time a lot of the soup has leaked out, so they were not as tasty as usual. 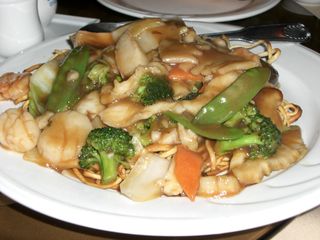 Seafood pan fried noodles.  A decent amount of fish and other seafood items.  The noodles are pan fried so they are crispy.  Pretty decent tasting dish.

Sticky rice cake, either with pork or preserved greens.  I didn’t get
any this time, but this is a traditional Shanghai dish, and they
make it pretty well here.  The cakes are like very chewy noodles. For dessert, I definitely recommend the eight treasure rice.  This is a sweet sticky rice dish.  The outside has a syrup and has some different sweet items inside, such as pineapples, raisins, dried longan, etc.  The center is filled with red bean paste.  This dish is often not made very well at restaurants and the Chin’s version is pretty good and pretty well priced.

I also like the Sesame sticky rice in fermented soup, but I think this dish is more of an acquired taste.  The soup is a fermented rice wine soup which some people don’t like.  I grew up eating it, so I love it.  They serve it it with mochi-like rice balls that are filled with sweet black sesame paste.  I don’t have any pictures of this dish from my last visit because I’m the only one who eats it and the bowl is pretty big and I can never finish it.

Some items I was disappointed with: 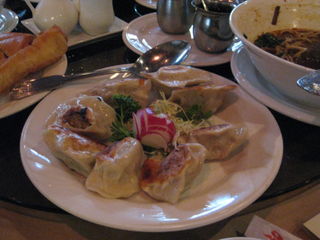 Potstickers.  While the presentation is nice, the dumplings were not crispy or flavorful and on the small side.  I was not impressed at all.

Fried silver strand roll.  Only one roll. I thought maybe there would be at least 2 rolls considering the price. It was jut okay tasting, but too expensive in my opinion.

3 comments on “Chin’s- The other chinese breakfast spot”