It’s been a long time since we’ve visited Donut Bar. It’s become a popular food tourist attraction, so the long lines have kept us away. But they recently launched Donuts+ Beer evenings and debuted a few new items I really wanted to try, so we decided to go check them out last weekend. 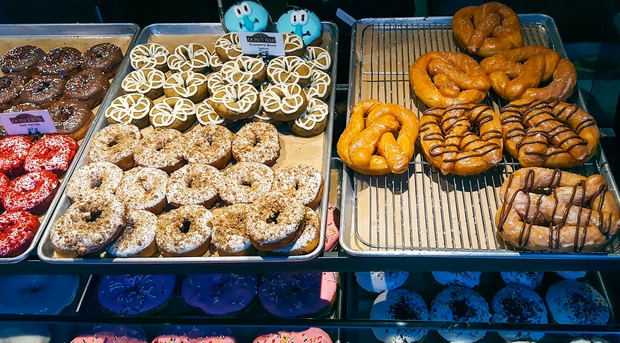 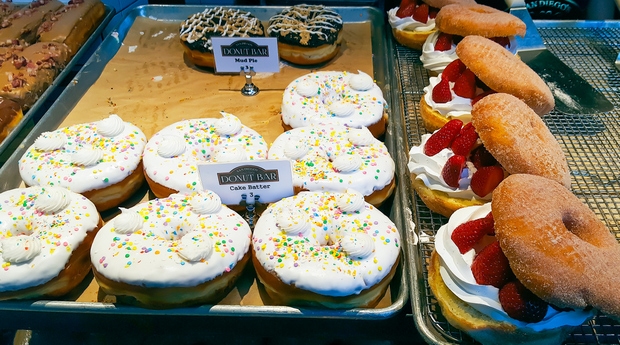 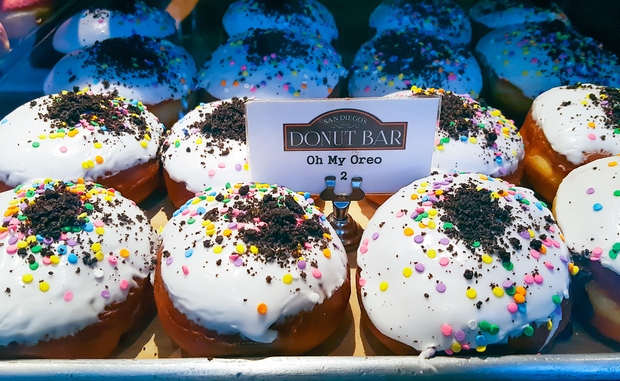 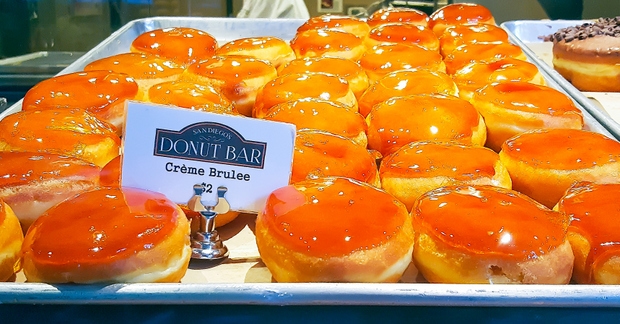 They open at 5:oo PM for their evening session and we arrived around 5:30 PM. While there was a steady flow of customers, we did not have to wait in line. They have a few tables downstairs along with a much larger seating section upstairs. Their display cases were full of freshly fried donuts and they also offer several beers on tap as well. 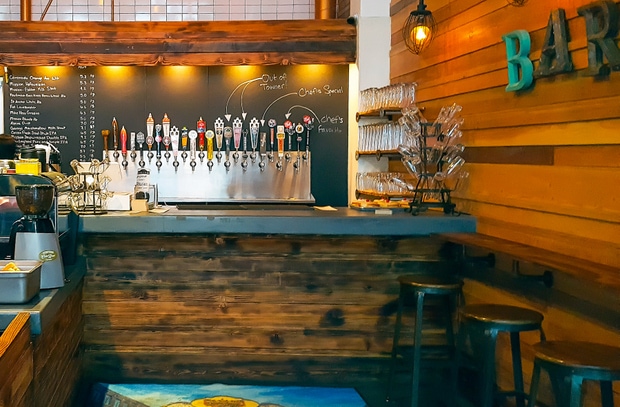 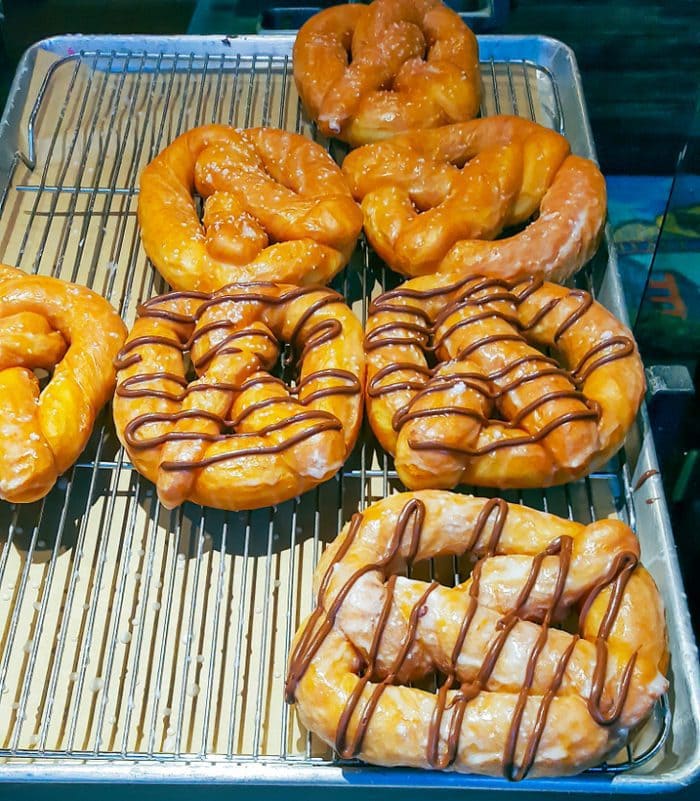 Our main objective was the Pretzel Donuts, which are only available during their evening sessions. Soft pretzels and doughnuts are two of my greatest loves, so you can imagine my excitement at this hybrid creation. Their donut dough is shaped like giant soft pretzels. They are treated to a light sweet butter glaze and then sprinkled with pretzel salt. They also offer a version drizzled with chocolate. 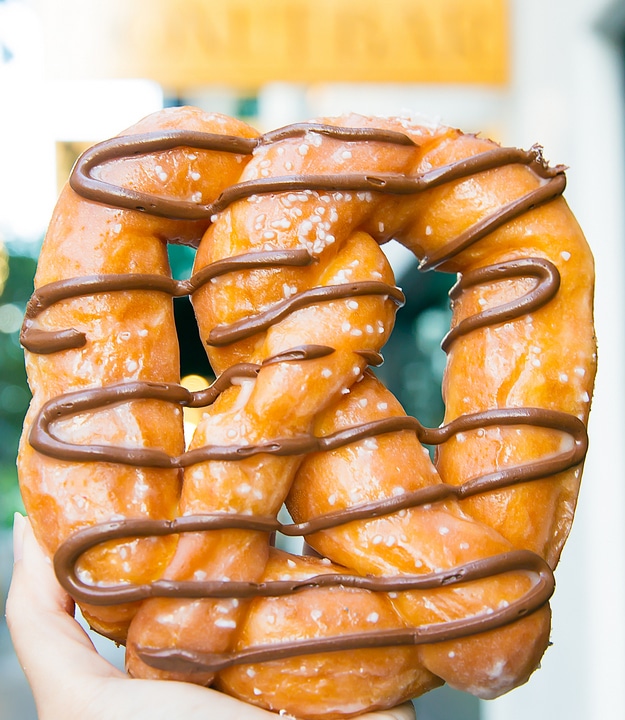 We enjoyed these. It’s basically their fluffy raised donuts shaped into a pretzel, but the pretzel salt and slight buttery finish does give you a little of that soft pretzel taste. 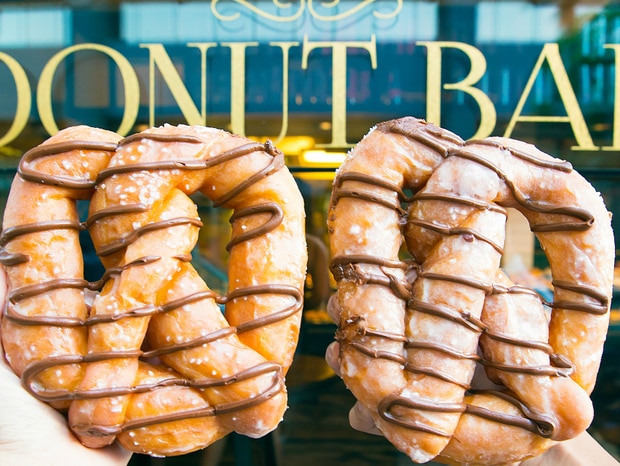 One of the employees told us she loves dipping the pretzel donut into their cheese sauce, but since we got the chocolate one I wasn’t so sure it would work as well. Next time I’ll get the glazed one and try it with the cheese sauce. 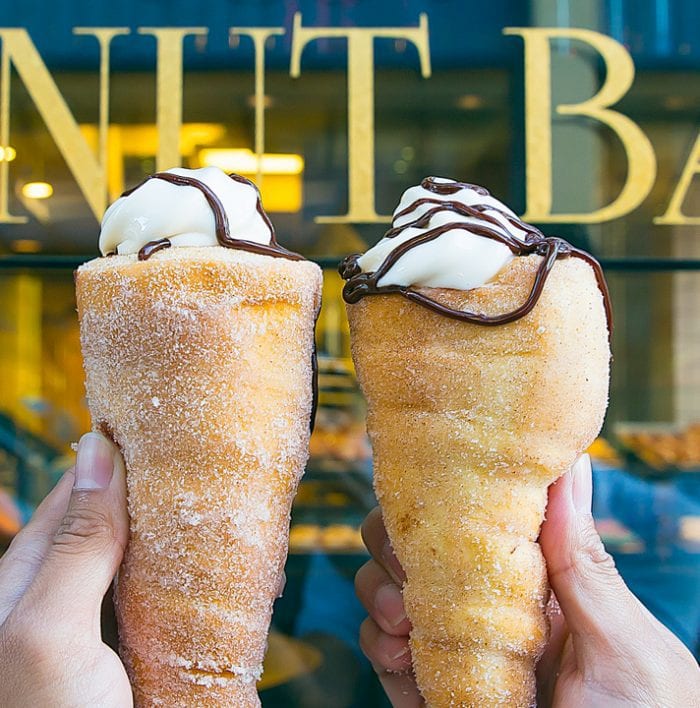 These desserts from Europe were trending all summer on social media. If you recall, I made my own version here. I was able to try Donut Bar’s version a few months ago and enjoyed it. Then when we went to NYC, we tried another popular one, but left very disappointed. I told Mr. K that Donut Bar’s version was much better, so I made sure he got to try it this time. The donut ice cream cone is their cinnamon sugar donut, rolled into a cone shape. Because it’s covered in cinnamon sugar, they do wrap it with some paper and serve it in a cup.

It’s much easier and less messy if you eat it the way they give it to you. But of course I felt compelled to take the cones out briefly for a photo. The soft serve does melt pretty fast and I do wish it was piled a little higher, but these are still pretty darn tasty and I love that the donut cone is firm enough to hold the ice cream but is still soft and fluffy when you bite in.

I was tempted to pick up a few of their donuts to-go, but we had a lot of sweets planned for the weekend. Until this recent visit, I’d forgotten the size of their donuts. Their raised donuts are about 1.5 times bigger than the average raised donut.

Overall, we’re really excited that Donut Bar re-opens again in the evenings. We’ve had a few friends who’ve wanted to come here but we haven’t been able to take them because Donut Bar sells out so early in the mornings. I love that I can now take people here in the evenings or come in when I’m craving one of their donuts. My favorite is still their French toast donut. I also like the beer concept. We’ll have to come back for donuts and beer soon.