Double stuffed potatoes are an easy potato side dish or appetizer. The potatoes are baked and then scooped to make a creamy potato filling with bacon and chives. The filling is stuffed back in the potato skins for serving. 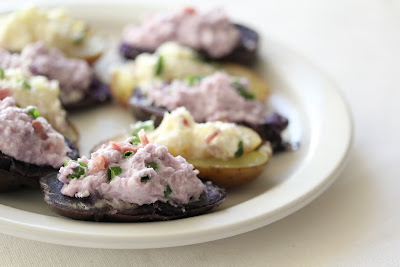 I wasn’t sure what to call these so I went with double stuffed potatoes. They are similar to twice-baked potatoes except that the entire potato isn’t baked a second time. Instead, creamy sour cream mashed potatoes with bacon and chives are stuffed into the roasted potato skins.

I didn’t want to bake the whole thing a second time once they were stuffed because I wanted the purple color to be vibrant and not browned by the oven.

I love working with blue potatoes. The purple/blue color is so pretty. I’ve made some deviled potatoes in the past and that is what inspired my idea for these mashed potatoes stuffed in potatoes. 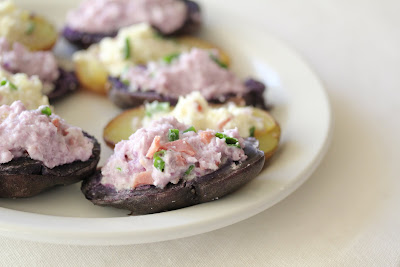 How to Make Them

Slice the potatoes in half lengthwise and place them on a baking sheet. Bake the potatoes for 30 to 40 minutes at 350°F or until they are tender.

Place the potato skins back in the oven and roast them at 400°F for 10 to 15 minutes or until they have turned crispy.

If your potato filling is cold, you can warm them up in the microwave before filling each potato skin. 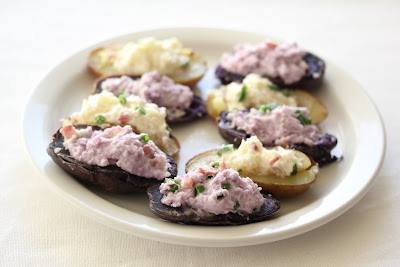 These would make a wonderful appetizer. The mashed potatoes are so very creamy thanks to the addition of sour cream. The bacon bits and chives give it some texture and flavor.  The roasted potato skins taste great on their own but even better with the creamy mashed potatoes stuffed inside. 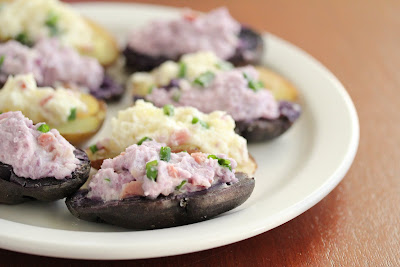 Did you make this recipe?I'd love to see it! Mention @KirbieCravings and tag #kirbiecravings!
Posted in: Appetizers & Side Dishes, Recipes
0 Comments // Leave a Comment »