The first Dunkin’ Donuts opened in San Diego last Monday (it’s technically the second since there is a location in Camp Pendleton, but that one is not open to the public), with people lining up hours before its 6 a.m. opening. The crowds have not yet subsided. 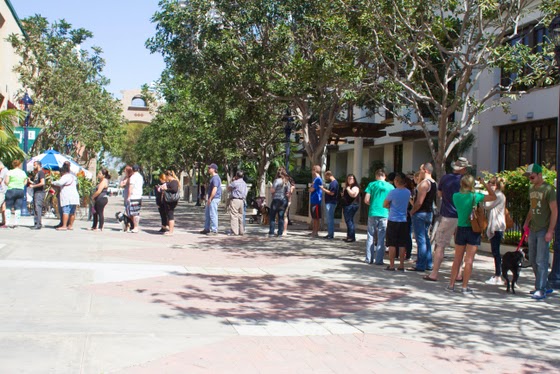 Such a craze over Dunkin’ Donuts might seem inconceivable to those living on the East Coast where Dunkin’ Donuts are prolific. But for those of us living in California, it’s been a long, long wait. After years of pleading for Dunkin’ Donuts to make its way back to California, last year, Dunkin’ Donuts finally announced its plans to do so. The timing seems right as the donut scene has greatly picked up in the last few years. 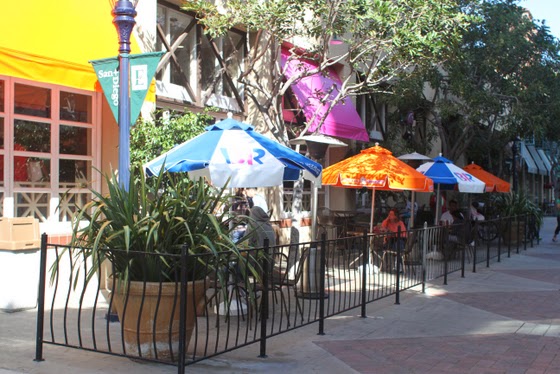 Dunkin’ Donuts has plans to open 45 locations in 2015, but San Diego got an early start with a Dunkin’ Donuts opening inside the Embassy Suites downtown. There’s no missing the store-front, with the oversized banners and large crowd of customers. It’s actually a combo store of Dunkin’ Donuts and Baskin Robbins, but the Baskin Robbins portion has been pretty much ignored. 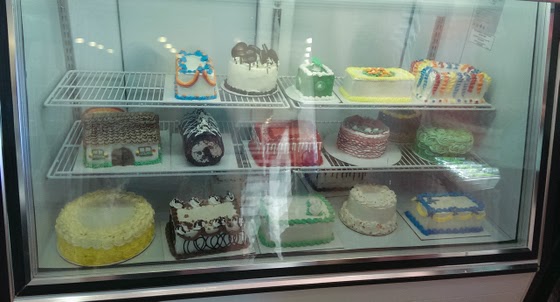 I grew up in New York and while I visited DD often, I never gave too much thought to them. I liked the donuts but wasn’t overly impressed with them. I think its popularity stems largely from its convenience and availability. It’s a place to grab a coffee and a breakfast sandwich on the way to work, or a place to stop in for an afternoon donut pick-me-up. The selection is plentiful all day, unlike many donut shops in San Diego who run out early and close before nighttime.

And of course, there are those munchkins. The adorably named donut holes in a multitude of flavors were a staple at every birthday party, classroom celebration and more when I was growing up.

It wasn’t until I left New York and moved to California that I began to fully appreciate DD, now that it was no longer around. I’ve missed it tremendously over the years, especially the munkins. The DD coffee commercials are particularly torturous.

I introduced Dunkin’ Donuts to Mr. K during our trip to Boston last year and apparently I created a monster. Last Monday he heard about the Dunkin’ Donuts opening from his co-workers and demanded to know why I hadn’t told him first. So this weekend, we found ourselves in the crazy long line.

While waiting, we kept seeing ads for their new Eggs Benedict Sandwich. Unfortunately, we didn’t find out until we were at the counter that they were not available because they didn’t have the English muffins. 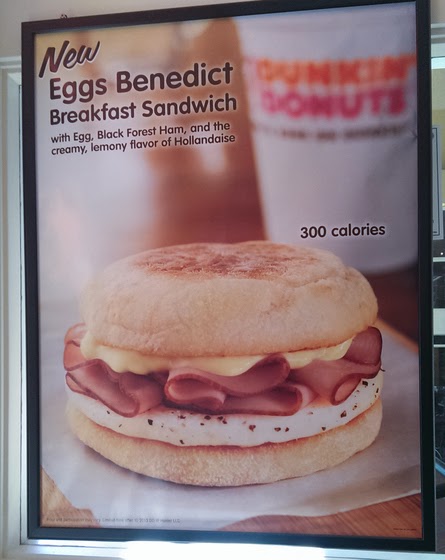 Donuts are priced at 99 cents. I like that they don’t charge extra for “specialty” donuts, a practice that is common amongst other donut shops in San Diego. It’s cheaper to get half a dozen ($5.39), and even cheaper to get a full dozen ($8.99). 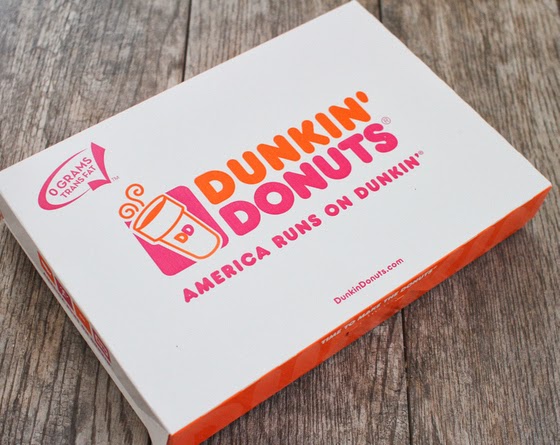 We got a box with half a dozen: bowtie, blueberry, glazed, Boston cream pie, Mint Cookie and Cream, and Old Fashioned Glazed. 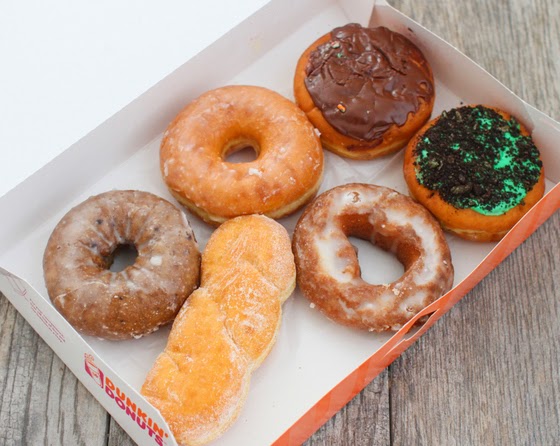 With the high demand resulting in a constant replenishing of the supply, the donuts were incredibly fresh. The glazed was fluffier than I remembered. I also really enjoyed the blueberry cake one, which had a melt-in-your-mouth softness. 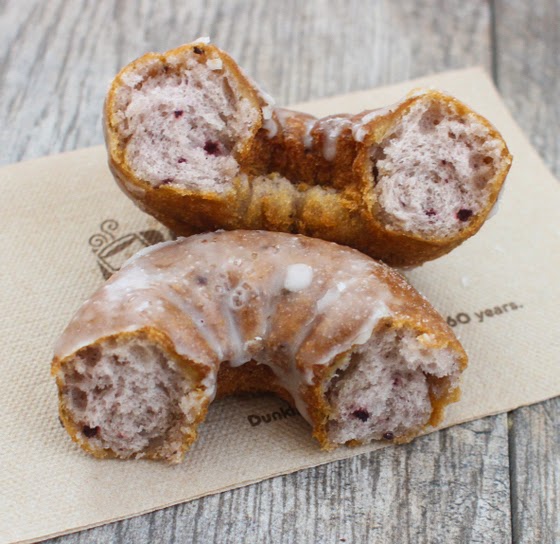 I couldn’t remember how I felt about the filled donuts so we got two. Unfortunately, we didn’t care for either one. The Mint Cookies and Cream was filled with a sickeningly sweet frosting. It also barely had any filling. I ate an entire half without finding any. I didn’t bother with the Boston cream pie after tasting the mint cream but Mr. K reported that the filling was just as strange tasting. 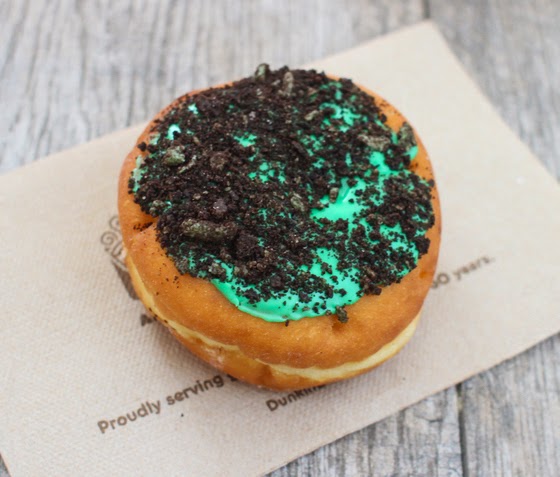 We also got an assorted box of munchkins. 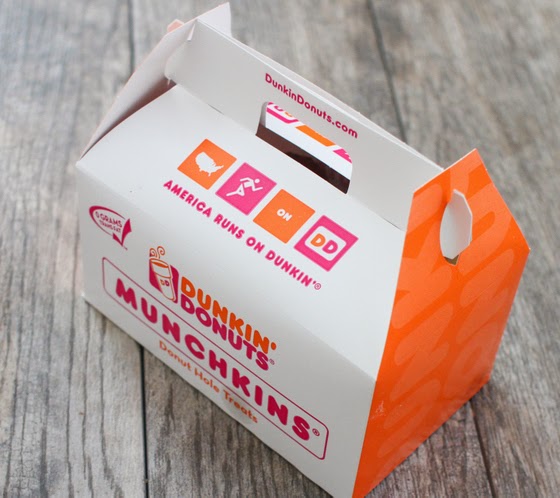 I had been looking forward most to the munchkins, something I’ve missed desperately since moving to California. I was disappointed to learn they only had four flavors available (blueberry, glazed, chocolate with sugar, chocolate with sprinkles). Usually DD offers 9-10 different flavors. Hopefully more variety will come after the store settles in. 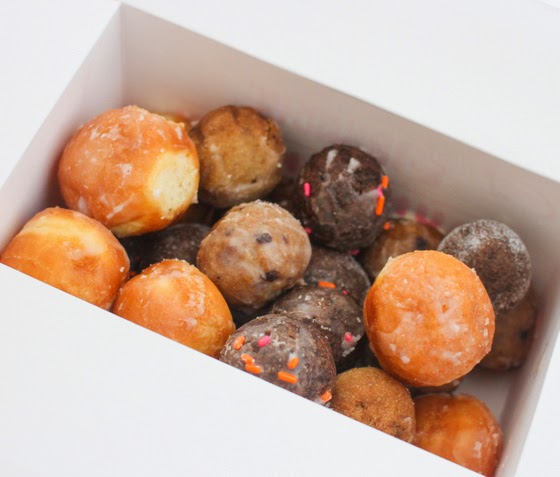 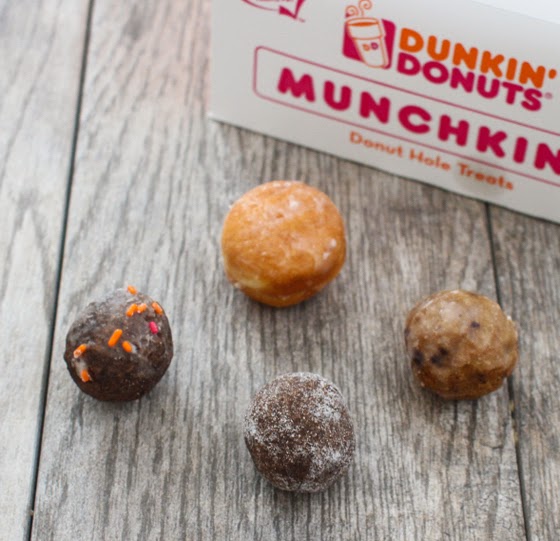 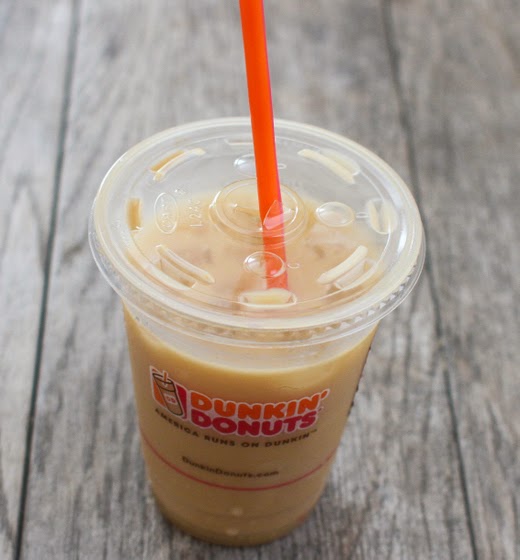 The coffee was mixed with three creamers– much too sweet for me. I do enjoy DD’s coffee in general, but next time I’ll get a less sweet one.

We got our DD fill for a while. I’m not willing to wait in those long lines again, but I do want to come back once things calm down.