Recently, Fleming’s has begun hosting monthly media dinners, inviting various food bloggers, journalists, and others to an intimate dinner at Fleming’s, where guests get to try a variety of dishes regularly offered at Fleming’s as well as new menu offerings.

I was lucky enough to be invited to one of these dinners.  I had originally been invited last month, but had a conflict, and was unable to attend. After reading about the wonderful event on foodies: a southern california food blog, I made sure that my schedule was clear for the next one.

Fleming’s hosts two of these media dinners a month, one for each location in San Diego: La Jolla and downtown. I chose the La Jolla location since this is the location BF and I frequent.

We were seated in a private room in the back of the restaurant. As the night wore on, and the main dining room got quite loud, being able to shut the doors and drown out most of the noise was a definite plus.

I had been forewarned about the large amount of food we would be experiencing, but I was still amazed by all the food we sampled.  I always feel a little odd about reviewing food places where I’ve been specially invited to and where the food is free, so I’ll keep my comments to a minimum. 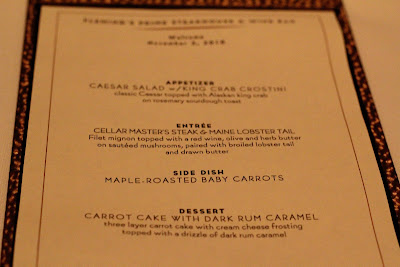 The menu we were trying that night was their Memorable Meals. A few times a year, Fleming’s will feature a “Memorable Meals” menu.  It’s a prix fixe menu for two, priced at $99.  The menu is not presented to customers, but must be specifically requested. If you sign up for the Fleming’s newsletter, you are notified when these events occur, and when you make a reservation, you can request the special menu.

BF and I both familiar with the Memorable Meals and we’ve participated in a few in the past. You can read one of our experiences here.  The  Chef  told us their most popular Memorable Meal is the filet mignon and lobster tail combination. Since I love both, I can see why this dish would be so popular. 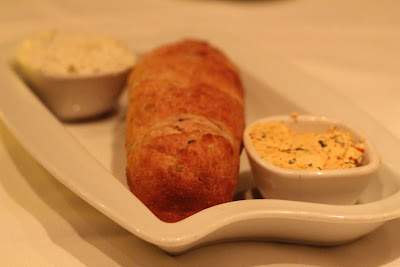 Our night started off with their famous fresh baked rosemary bread along with two different whipped flavored butters. I can never remember the flavors fused into the butters, but I always love them. The bread starter course at Fleming’s is one of my favorites.

We then were presented with three of Fleming’s most popular appetizers: the lump crab cakes, sweet chili calamari, and tenderloin carpaccio. 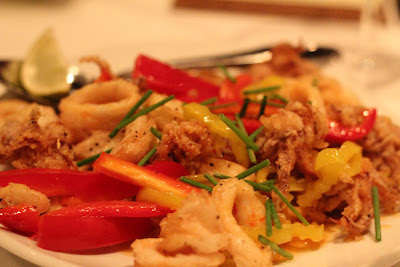 The calamari is breaded and tossed in a sweet and sour chili sauce, and cooked with some bell peppers. I loved the use of yellow and red peppers to make this dish so colorful.

The jumbo lump crab cakes. They were a bit on the small side, but they were chock full of crab meat. 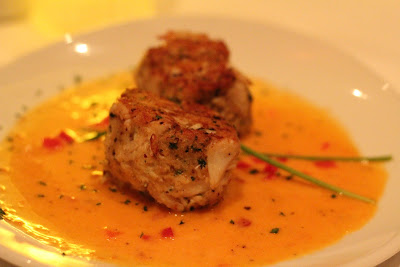 The carpaccio was thinly sliced and served with a bed of greens and crispy onion and cheese flavored toasted baguette slices. 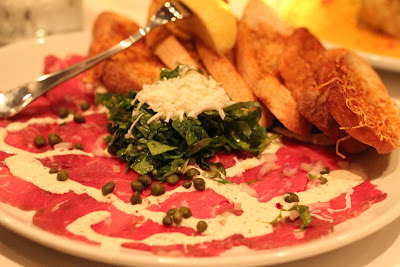 Other than its steak, Fleming’s is known for their large selection of wine. On that night, there were two wines recommended to us. One was a Von Buhl Reisling. Reisling tends to be a sweet wine, often accompanied by desserts. This particular Reisling was very different. I really enjoyed it.  It had a fruity, citrusy smooth taste that would go well with most meals.  It’s definitely a wine I’d order again next time I dine here.

We also had a red wine, again, I’ve forgotten the name. The wine was very smokey. It went nicely with the steak.

After our three appetizers, we began to dig into the first course on the Memorable Meal menu: the Caesar salad with King Crab crostini. The crab  salad had chunks of apple was a nice refresher to the Caesar salad. 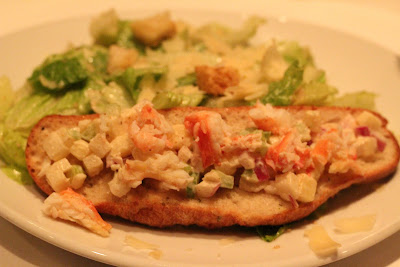 Next, came the main course: A 5 oz filet mignon and a lobster tail. The lobster is initially presented sitting on top of it’s tail, but is then quickly removed by the waiter. I had to act fast to snap this picture before my shell was removed. 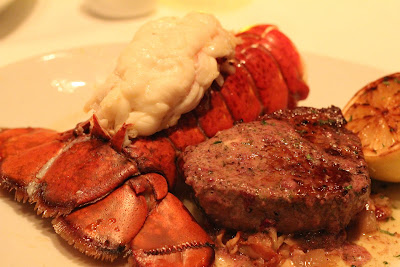 We were then treated to an array of different side dishes. The side dish offered with the Memorable Meal are the maple roasted carrots.  But we also got to try the famous Fleming’s potatoes, sauteed corn, and grilled asparagus.

Fleming’s potatoes are prepared served au gratin, sliced thinly and smothered in cheese and baked. It’s a popular side here, and one of BF’s favorite sides when we come here. 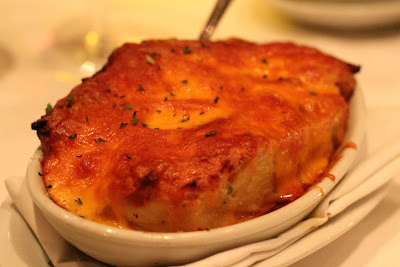 The maple carrots was one of my favorites. Normally I like my carrots raw.  I don’t like how carrots take on a soft texture when cooked. But I liked how these carrots were lightly sweetened since they are cooked in the maple syrup. 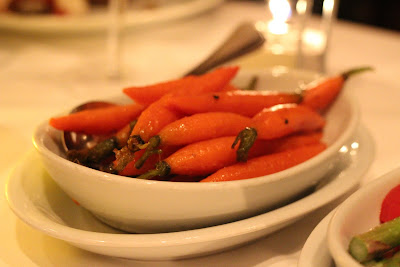 The corn was seasoned with pepper and other spices. 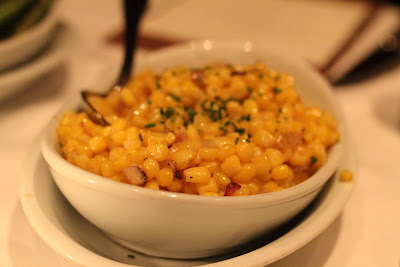 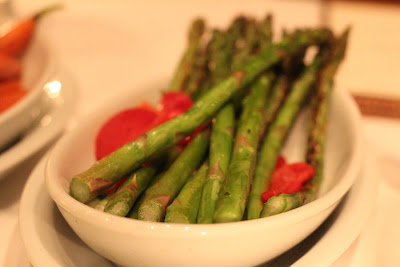 As if this wasn’t enough, there was still dessert to be had.  We were so stuffed by this point that BF actually let out an audible groan when the waiter came out with four different desserts, and a side of Chantilly cream. 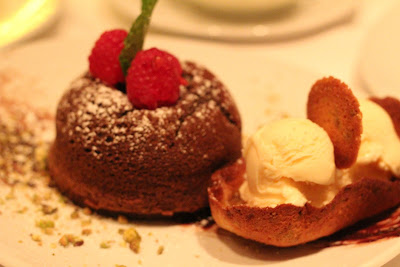 The carrot cake is featured on the Memorable Meals menu. This carrot cake had a very tropical taste to it, as it is mixed with pineapples. The pineapples also made this cake very moist. 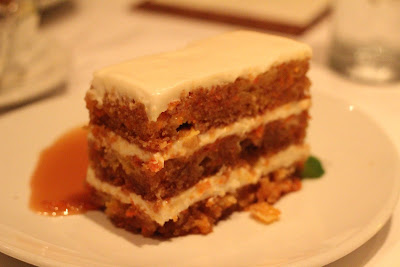 The creme brulee. Simple, classic, and well done. I was surprised to hear that all the desserts are made in house as well. 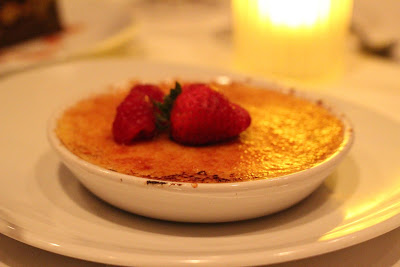 The Walnut turtle pie. My least favorite, but it’s more of a personal preference thing. I’ve never been a big fan of the “turtle” chocolates, ice cream, etc. This was very rich, sweet and dense. 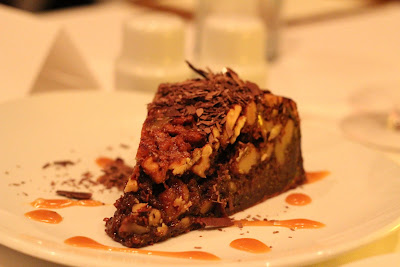 Afterward we got to speak to the Chef, and ask him questions and find out a little more about his background and the menu.

It was an extremely fun and filling experience.

Fleming’s is also currently doing a happy hour daily which they call “5 for 6 until 7.” Basically five appetizers, five wines, and five cocktails are offered for $6, served until.  I’ve heard good things about their $6 happy hour prime burger. Now that I know it is offered 7 days a week, I’ll have to check it out sometime soon.