Recently I was invited to a VIP event at Harney Sushi to celebrate their 9th birthday.  I’d never been to Harney Sushi.  It was on my to-do list but the thought of trying to find parking in Old Town left me too lazy to go.  However, I loved the idea of attending a VIP event and getting free food, so I decided to attend.  I was able to bring one guest, so of course I took Boyfriend.

The event took place on a Monday night.  I don’t know about you, but I am always so exhausted and blurry eyed on Mondays.  So while I was at work, I was seriously debating whether or not to still go because I was so tired.  Boyfriend was equally tired and didn’t care if we went or not.  I went back and forth for a while regarding whether to go, but in the end, my love for food won over.

I was surprised to find that they had closed the entire restaurant for the VIP event.  I had thought we would just be put in a private room.  After entering, I took a bit of time to browse the place. It’s relatively small, but has a bar area, patio and a main dining space.  There were some managers and supervisors of Harney Sushi there.  The guests consisted of PR companies, other media related companies and some food bloggers. 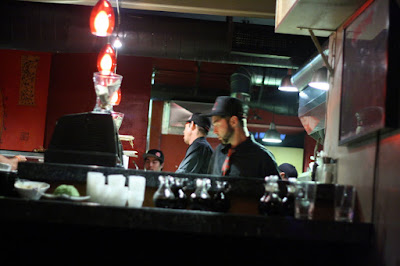 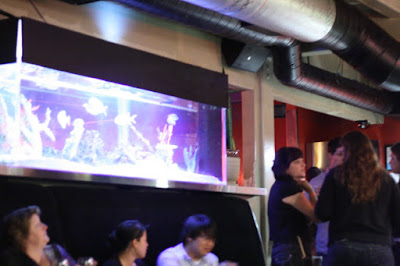 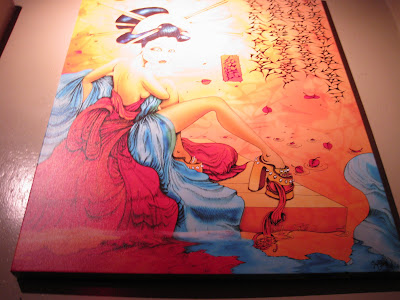 They had various sushi rolls laid out at the sushi bar, and you could help yourself to what was on display.  None of the rolls had any labels though, so for the most part, I wasn’t quite sure what I was eating.  In addition to rolls, they also had some pot stickers and beef skewers.  There was also wine at the bar.

Even though this was an event to promote the place and they welcomed pictures, I felt really self-conscious taking pictures, especially knowing that there were probably other food bloggers in the room.  So I only snapped a few quick pictures. 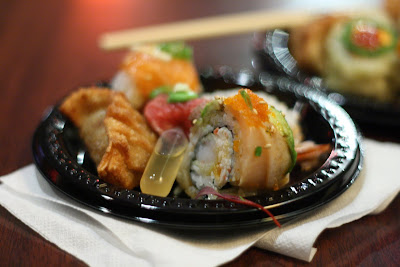 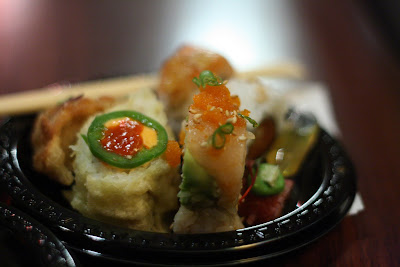 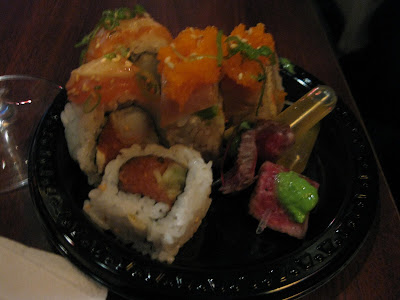 I don’t remember too much about the food.  A few of the rolls were spicy and quite a few had shrimp tempura inside.  The most intriguing thing for me was the meat appetizer.  Seared beef was skewed on this plastic yellow tube.  I’d never seen meat displayed that way before.  You can see the plastic tube on the top picture.  Inside the plastic tube was additional meat juice/sauce that I squeezed on the meat.

Going into the event, I was aware that there most likely would be other food bloggers there, a prospect which both excited me and made me nervous.  Until now, I haven’t come face to face with any food bloggers. After we arrived, I took a quick glance around the room seeing if I could spot any potential food bloggers.  Of course, I didn’t actually expect to recognize anyone.  Most of the San Diego food bloggers, myself included, are notoriously camera shy and so I don’t really know what anyone looks like.

But as I scanned the room, I did recognize a face! It was Paul Horn, Darlene’s husband from My Burning Kitchen. Normally, I’m not very good with faces, but it just so happened that earlier that day I had read a post by him, which included a picture of him.  In addition, I had recently begun reading his blog and comic strip.  His blog and strip caught my attention because I knew it was something that would interest Boyfriend.  Boyfriend spends all his spare time sketching, drawing, reading books on techniques, listening to videos. He loves to meet and talk to other artists.

I excitedly told Boyfriend that I had spotted “Cool Jerk.”  So after we finished eating, I went over and introduced myself.  It was fun to finally meet some food bloggers face to face.  We spent some time talking about food, talking about art, and finding out other things we had in common.

Boyfriend and I both left the event happy that we had decided to attend.  As for Harney Sushi itself, I took a long look at the menu and the drinks and I think I would like to come back at some point with friends and really experience the food.