After having such a good dinner experience at Hash House a couple of weekends ago, I really wanted to come back for brunch.  The Brunch menu has a lot more items on it that interested in me than the dinner menu.  I went to Hash House for brunch a long time ago.  It was pretty good, but I hadn’t wanted to go back because the wait was so long!  Well it turns out that while Hash House doesn’t take reservations on Sunday, they do on Saturday! So I made brunch reservations for Saturday, eliminating that awful wait.

We arrived right on time and our table was waiting for us.  The gave us a large table that had both chairs and a booth section with some pretty pillows.  It was such a pretty table!

I had a hard time deciding what I wanted.  I really wanted something with mashed potatoes and biscuits because I loved the biscuits from dinner.  But I also wanted to try their flapjacks.  They don’t have any pancake combos with biscuits and mashed potatoes. In the end, Little Brother decided to get the Tractor combo (pancake, eggs and sausages), and I got the Griddled meatloaf with mashed potatoes, biscuit and fruit.  And we shared the two entrees.  Boyfriend got the Original Eggs Benedict.

Just like last time when I was here for dinner, the service was great.  Our orders were taken right away, our food came out fast, our waters were constantly refilled and the waiter checked on us several times throughout the meal.

The portions for brunch are big, but not as enormous as dinner.  Or perhaps it is because it was my first meal of the day. At any rate, while the dinner portions had seemed like it was meant for 2-3 people, the brunch portions are definitely manageable to be finished by one person.  We managed to all finish our food (though we weren’t hungry again for the rest of the day).

Here is the Griddled meatloaf with biscuit, mashed potatoes and a side of fruit: 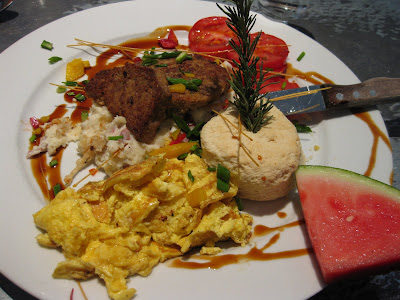 There was a lot of eggs in here. Definitely more than two.  The meatloaf was pretty good, nothing extraordinary.  The mashed potatoes were good, but again, didn’t stand out.  The biscuit was pretty dry though. I was surprised because the dinner biscuits had been so good.  Maybe because the dinner biscuits seemed fresh out of the oven and had the maple glaze on the outside.  Also I would have liked a side of fruit that was more than just a piece of watermelon.  But overall, it was okay.  I would probably try something else next time though. 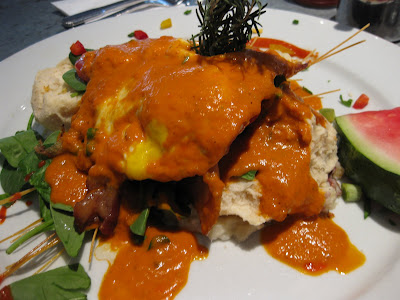 I didn’t try any. I’m not a big fan of eggs benedict.  The eggs are served on two giant biscuits. Boyfriend seemed to enjoy it though.

The Tractor combo with a mango coconut pancake: 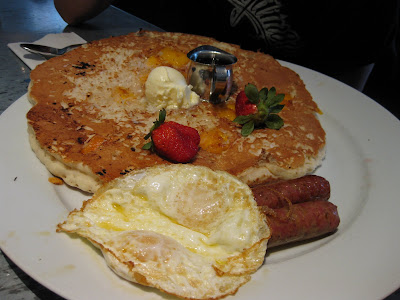 The pancake was huge! I mean it takes up most of the plate it’s on and these are not normal sized plates.  These are Hash House super size plates.  I couldn’t believe the size of the pancake.  Here it is from another angle:

It doesn’t look as intimidating in the picture, but it looked pretty intimidating when we got it.  Especially since pancakes tend to be filling.  I thought this pancake was cooked perfectly.  It was soo fluffy and thick and crispy on the outside.  It wasn’t overcooked or anything, which is impressive given the size.  The mango and coconut went so well with it.  Especially the coconut.  Since they used sweetened coconut flakes, I didn’t even need syrup. Delish!

Look how thick and fluffy it was: 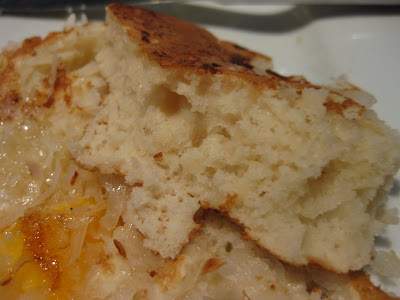 Here is an up close look at the coconut and mango on it. 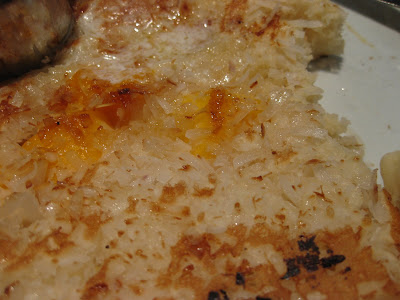 Though we were pretty stuffed after this, I really wanted to try the bread pudding, which I didn’t get a chance to try for dinner last time.

The waiter seemed shock that we even had room for the bread pudding.  It was pretty big: 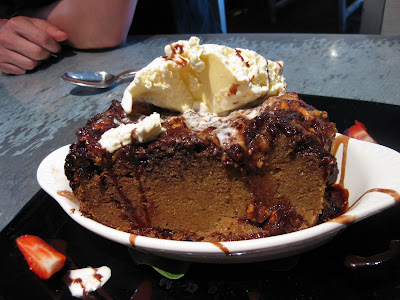 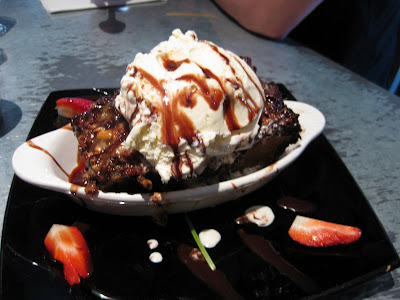 Unfortunately, I didn’t really like the taste.  The bread pudding tasted a bit like a banana bread that has not risen properly.  It was very dense and moist but I didn’t like the taste or texture.  The top was sprinkled with nuts, ice cream and chocolate syrup.  I liked the bread pudding I had at Jake’s Del Mar better.