It’s been a while since we visited this restaurant, which is owned by the same people who own Yakyudori Yakitori & Ramen.

We previously really enjoyed coming here for breakfast, which they serve daily. You start with a basic set meal and from there you can choose additional small add-on dishes ranging between $1-3 each. Our previous visits reminded me of the breakfasts I experienced during the brief time I visited Japan when I was younger. 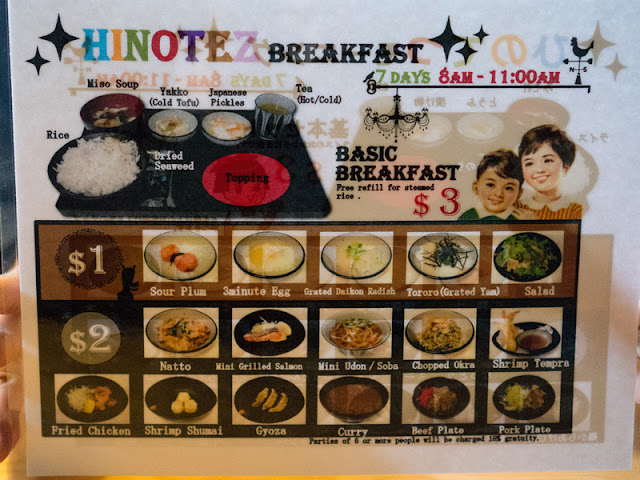 Last weekend, DH and I managed to come in just in time, about ten minutes before breakfast was over. 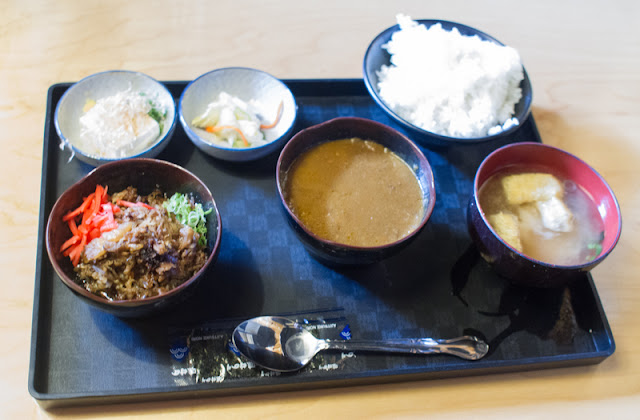 This was DH’s choice. We were seated at a booth with competing lighting that was really messing with my abilities to take proper photos. 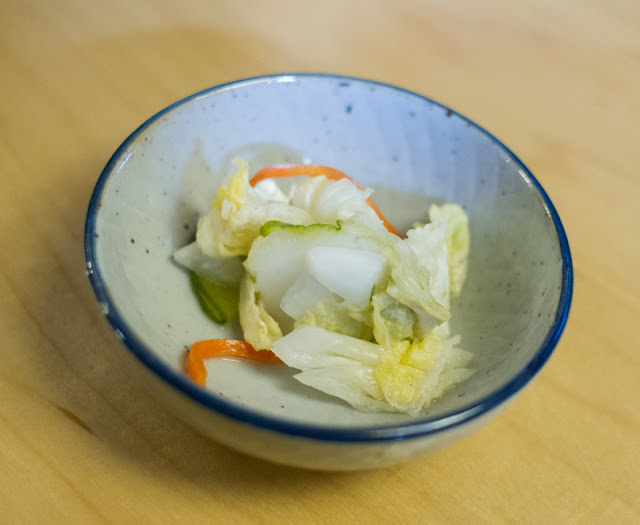 The basic set includes tea, bowl of rice, miso soup, pickled cabbage, cold tofu, and a package of seasoned nori. DH really enjoys the curry here because it’s filled with chunks of ground meat. I think it’s a pretty good deal for $2. We were both able to share the single serving. 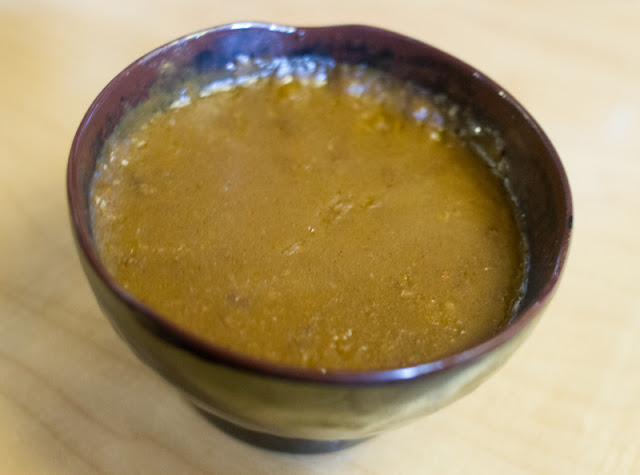 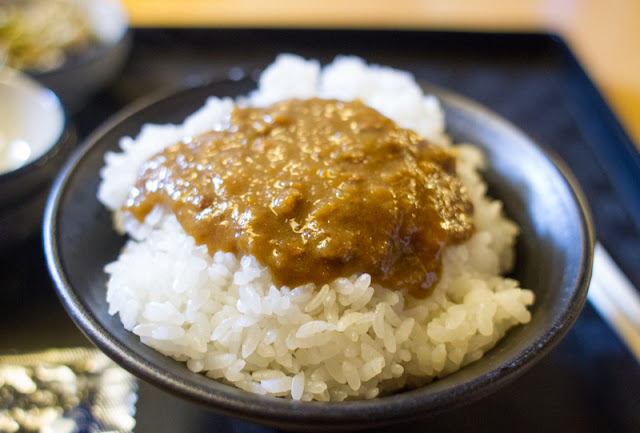 I wasn’t a fan of the beef bowl which used very fatty cuts of beef. 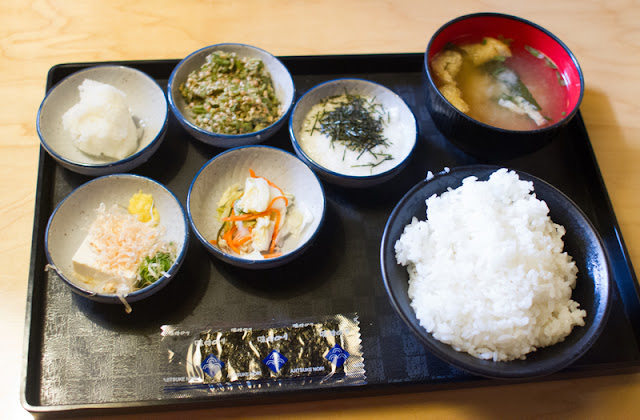 I was having a hard time choosing my add-on items. I’ve already sampled most of the ones on the menu and wanted to try something new. 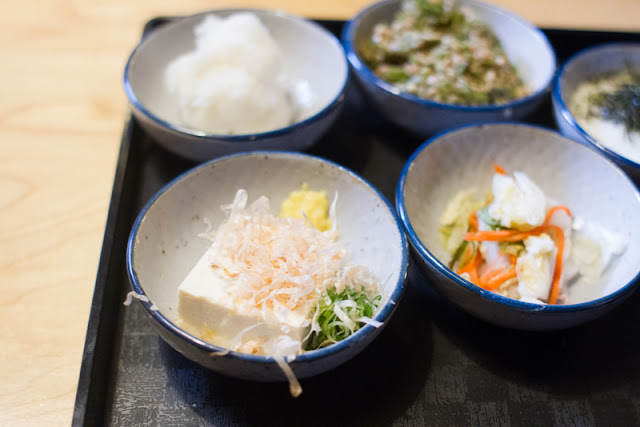 The grated yam is something I get every time. I really enjoy it, even though it has a slimy/sticky texture that can be off-putting to some. 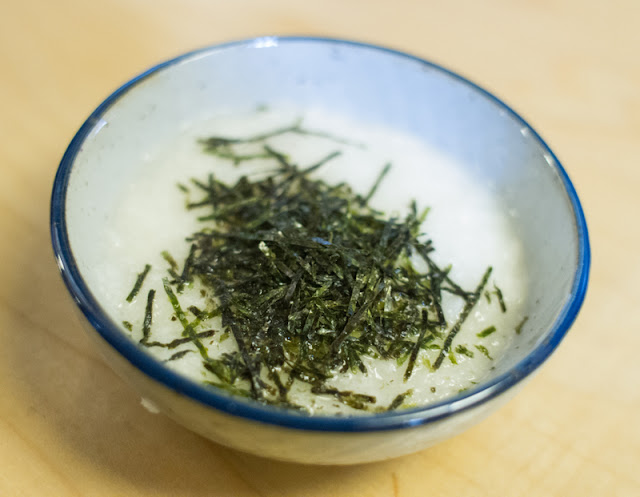 Grated daikon tasted exactly as it sounded. Raw daikon, fine grated. It definitely needed something to go with it, otherwise it was too plain. 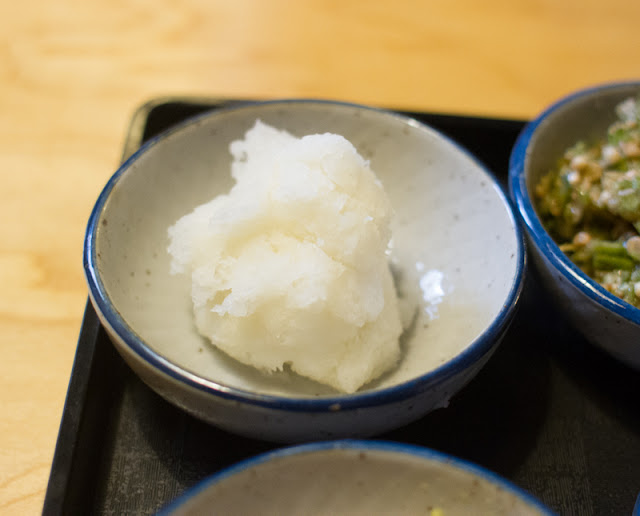 The okra was chopped into miniscule pieces, and lightly seasoned with garlic and I think soy sauce. It was a little too plain for me and a little too finely chopped. I didn’t really care for it. 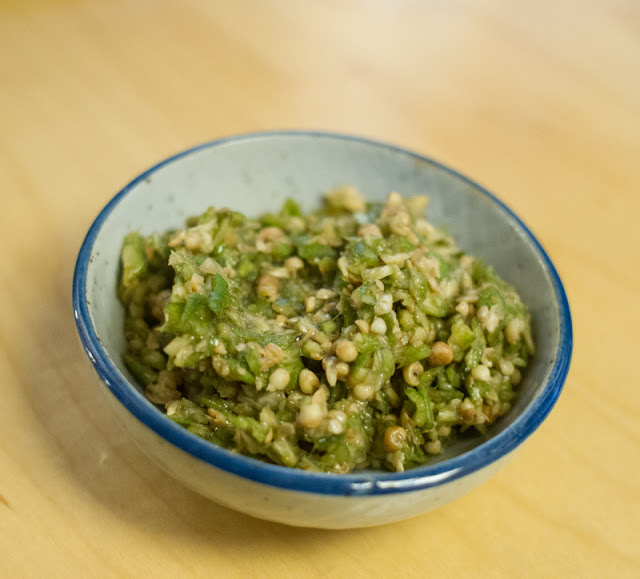 We had several enjoyable breakfast experiences here previously. You can read my previous post here. I was a little disappointed to see that the breakfast menu hasn’t continued to expand. I would have liked to see a few more items on there to choose from. It was still a nice quick, relatively cheap meal.

The one bad note was that because we had come at the end of breakfast, the cashier needed us to give us our bill right at 11. I assumed they must have something programmed in their system where the prices change after breakfast, so we went ahead and gave her our credit card to pay the bill. But even when she brought back the credit card receipt, she also insisted we had to sign it and include the tip, even though we had just started our meal. This was a little annoying and I wasn’t sure why it was necessary. I could understand needing to get the bill out if the prices in the system change after 11 am, but I didn’t understand why we had to sign the bill and pay tip before we had barely put a dent in our food.

On another occasion, we recently were also here for lunch. The lunch menu is quite limited, basically serving just ramen and curry. 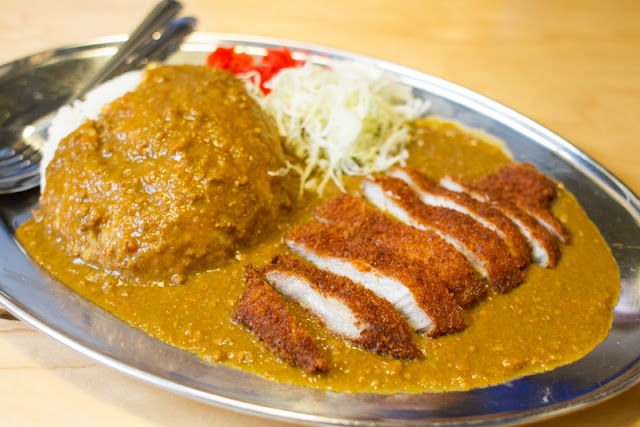 DH opted for a curry rice plate with fried chicken cutlet. It was a generous portion of curry and rice and the chicken was pretty good. 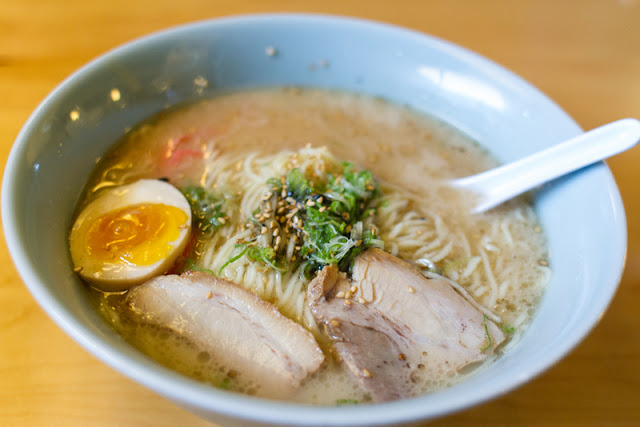 I haven’t yet had the tonkotsu ramen at either Hinotez or YY so I thought I’d try it out. It was a decent rendition, though not nearly as rich as the version at Yamadaya. I appreciated that it wasn’t too salty though. The egg was the best part. The yolk was still a creamy custard. 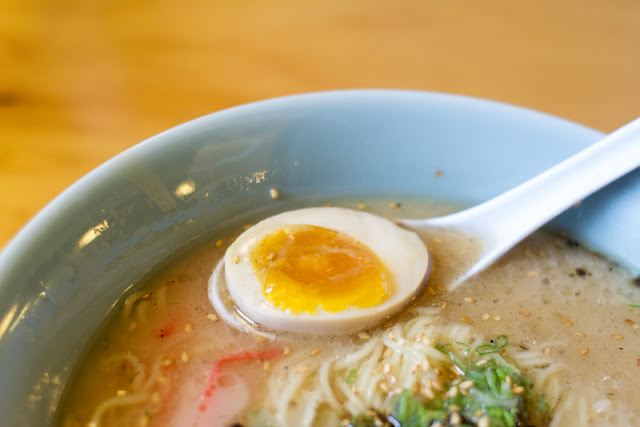