So after many, many posts about manju and mochi that I bought at Nijiya but are made at Hogetsu Bakery, I finally paid Hogetsu a visit! Previous posts on the manju and mochi I have bought can be found here, here, here and here.

I first heard about Hogetsu Bakery from Kirk of mmm-yoso. It’s a little bakery in Chula Vista where the husband makes delicious mochi and crafts beautiful manju. I love mochi and manju and have been wanting to pay this bakery a visit for a very long time, but it’s a bit out of the way, so I’ve never gotten around to it.

With the holidays coming up, I thought some handcrafted manju and fresh made mochi would make some nice gifts. So this past weekend Boyfriend and I took the trip.  The bakery hours are a bit short.  They are closed Sunday and Mondays and close early on the other days.  On Saturday, they are open until 5:30.

It took us a while to find because the store is quite small and there was no sign on the outside! I think the signs above are under construction, so they were not up.  In my excitement, I completely forgot to take any pictures of the storefront, inside or anything else other than the mochi and manju I purchased. 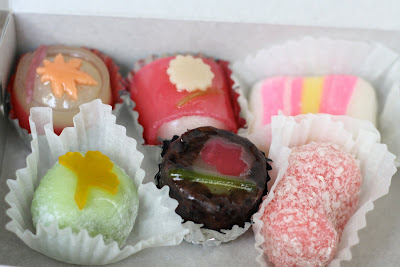 All these beautiful treats are $1 each, which is cheaper than the ones I get from Nijiya.

After getting one of each, Boyfriend and I were making the drive home and I kept staring at all the pretty treats and was itching to try one.  But I wanted to snap pictures first!  Boyfriend commented that I should have gotten two of each so I could eat one in the car and then still be able to take pictures of them all. Ah well. Now I know for next time.

Well, it’s a long car ride.  And unfortunately, I don’t have much self-restraint.  So I did eat one of these before taking a picture.  I chose a pink one, similar to the pink one in the picture.  One bite, and I knew I would have to come back to Hogetsu again, and soon!  Normally, I like my mochi to be very chewy.  In fact, one of the problems I’ve found with japanese mochi is that it is not chewy enough.  The mochi I bit into was soft. Really soft.  It wasn’t chewy at all.  But I loved it.  It tasted so fresh and it practically melted in my mouth.

I thought these three were the prettiest: 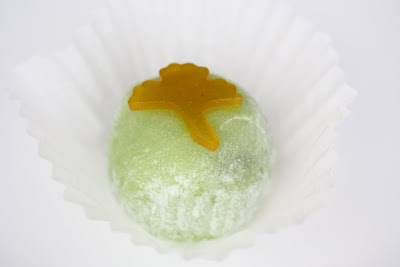 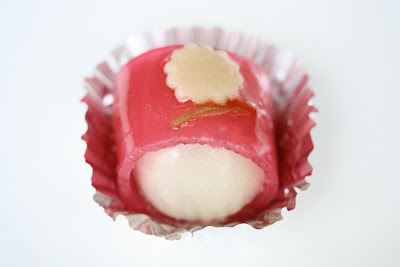 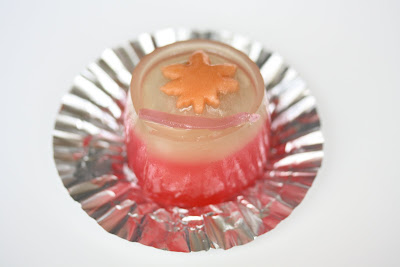