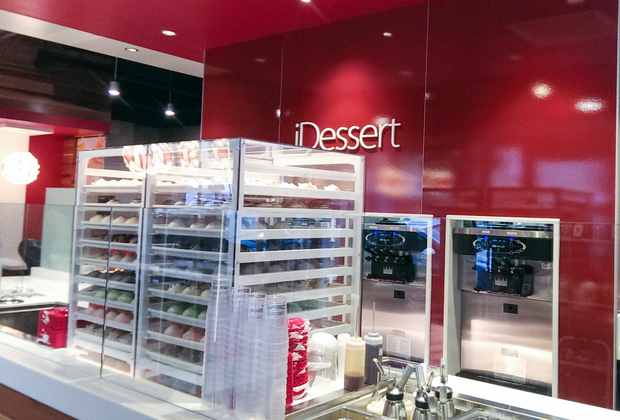 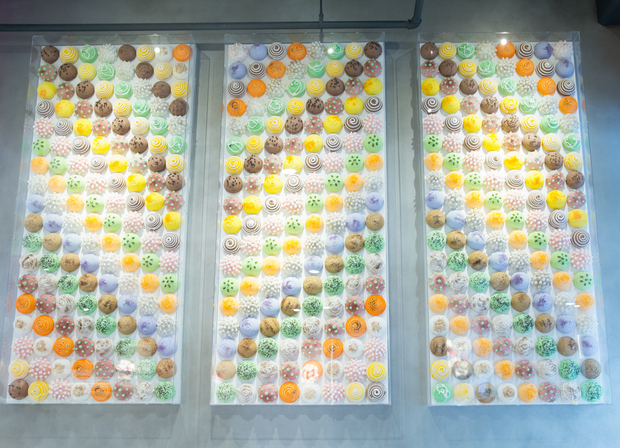 Chef Jean-Philippe moved to San Diego a few years ago and chose San Diego as the place to launch his new concept. Upon first glace when you enter, you might think you’ve walked into a frozen yogurt shop, with the soft serve machines and counter of toppings. But it’s not. It’s a more casual concept compared to the fancy offerings in Las Vegas, but still executed with the flare and quality you’d expect from an esteemed chef. The focus is on soft serve gelato, with options for customized shakes and sundaes. 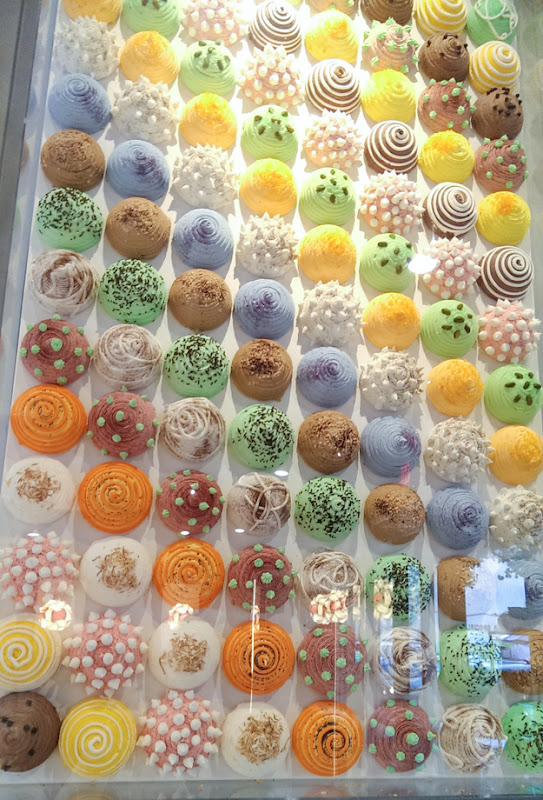 However, the main attraction are the customized desserts. Ordered through ipads, they start at $4.95. For this base price, you get to choose a a meringue shell flavor, ice cream flavor and sauce. Then there are other things you can add, such as cake, toppings, other sauces, and dry ice. If you don’t want to design your own, there are several fully loaded chef’s favorites. 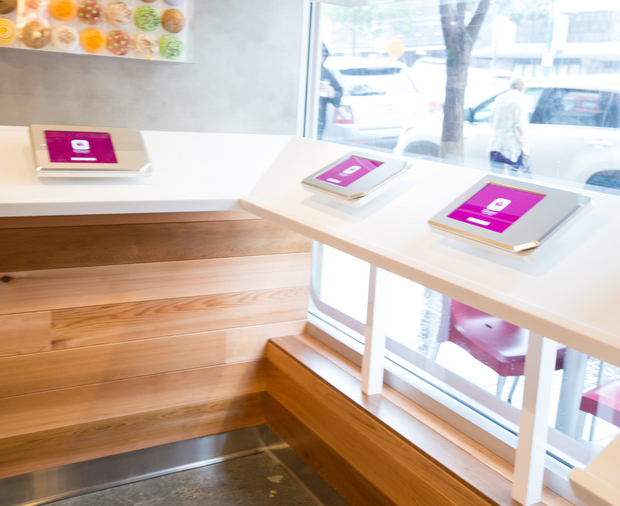 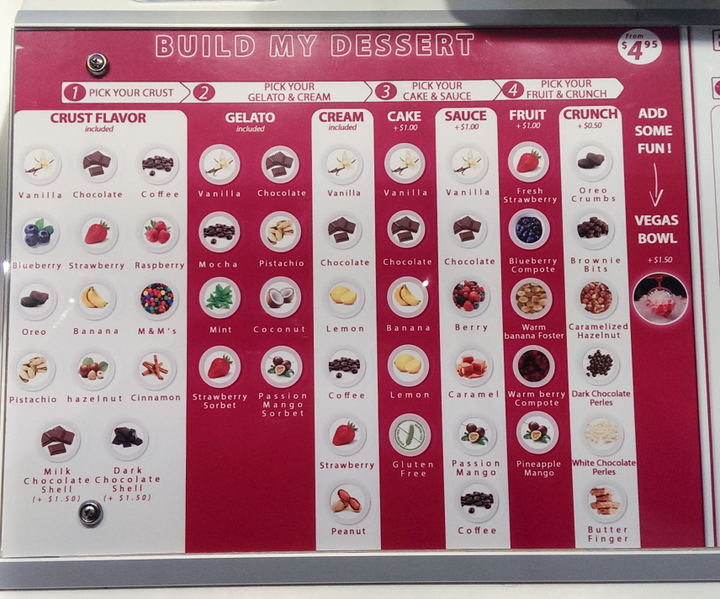 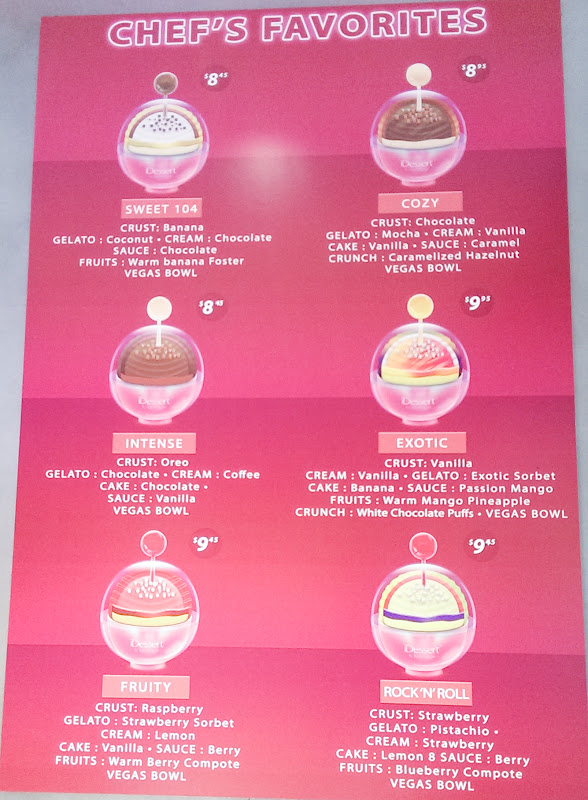 On our first visit, we chose to do a customized basic creation and a chef’s creation to compare. 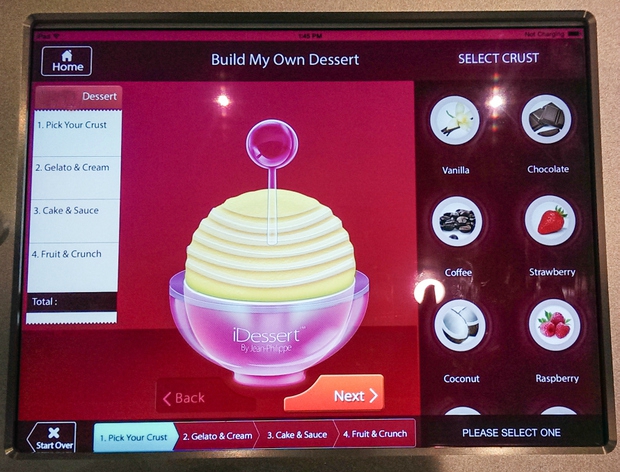 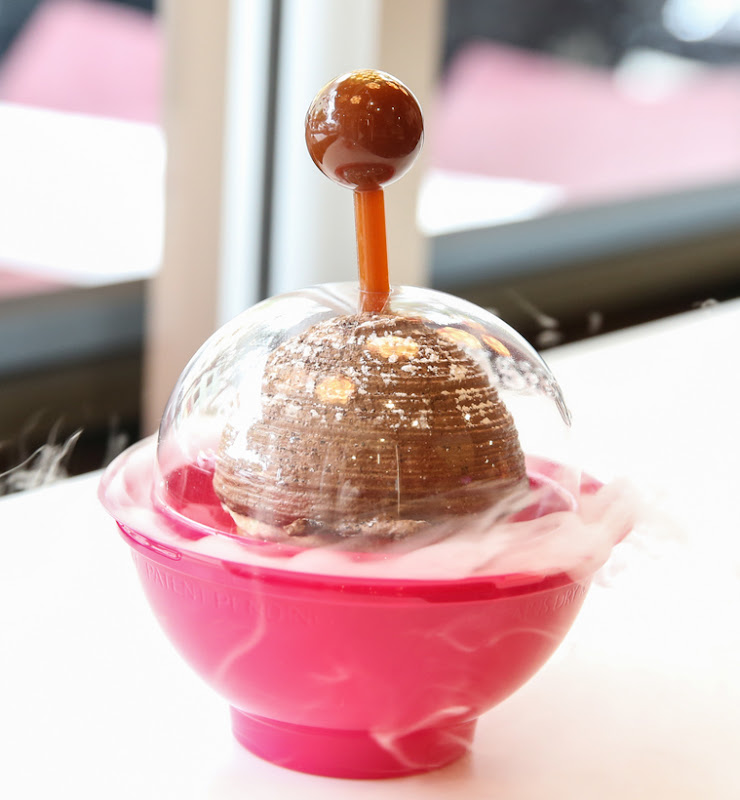 The nice thing about the chef creations is that they are all served in the “Vegas bowl” which means in a dome with dry ice at the bottom. Yes, I know it’s just for show, but it sure is fun to watch.

Here is a really rough video I pieced together:

Once the smoke dissipated, we squeezed the bulb on top to release the caramel sauce directly into the cake. 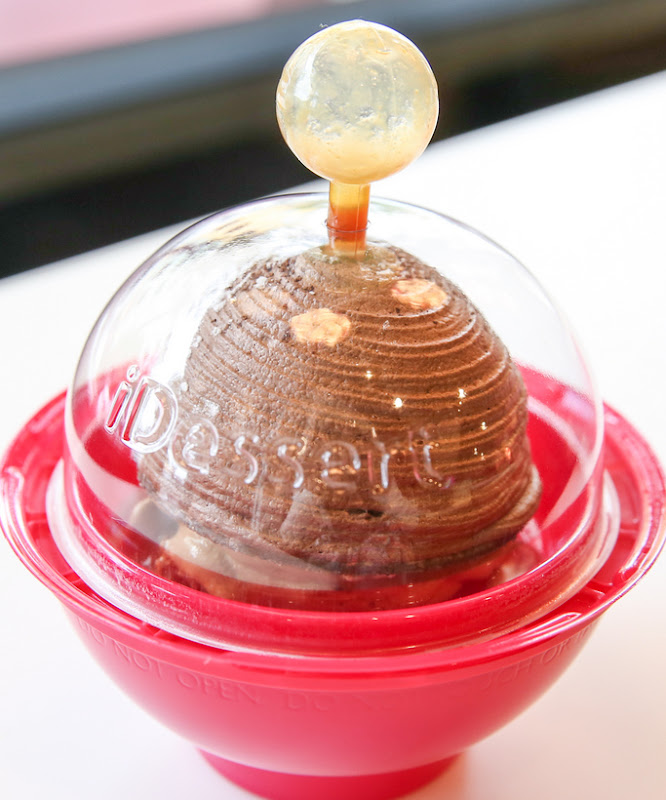 To break the meringue, you use the end of the spoons given which have a pointed end designed specifically so you can break into the shell. I’ve never been a huge fan of meringues, but for these desserts, it really works. Not only are the shells beautiful, but they add a nice crunchy texture to your dessert. The gelato soft serve was extremely rich and creamy. I did find the creation as a whole a bit too sweet for my liking. Next time, I’ll try one of the fruit ones. 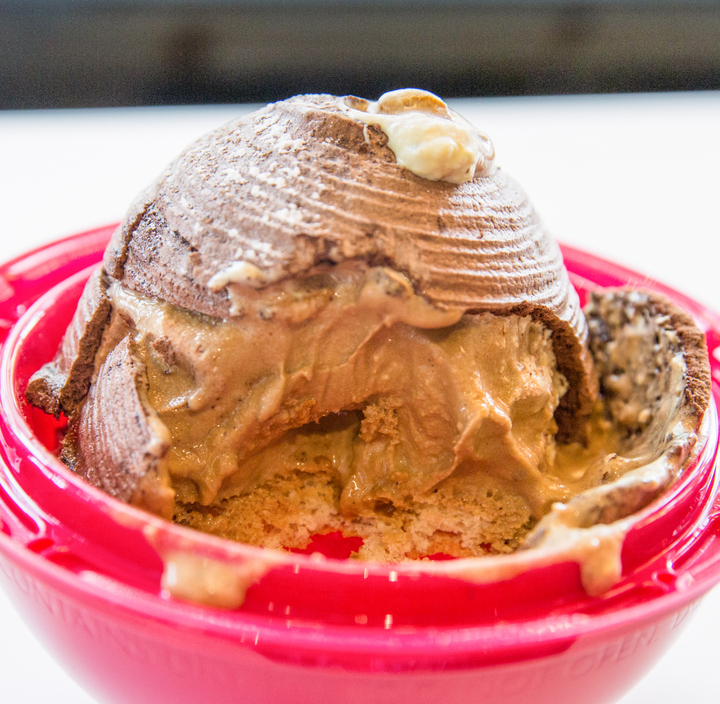 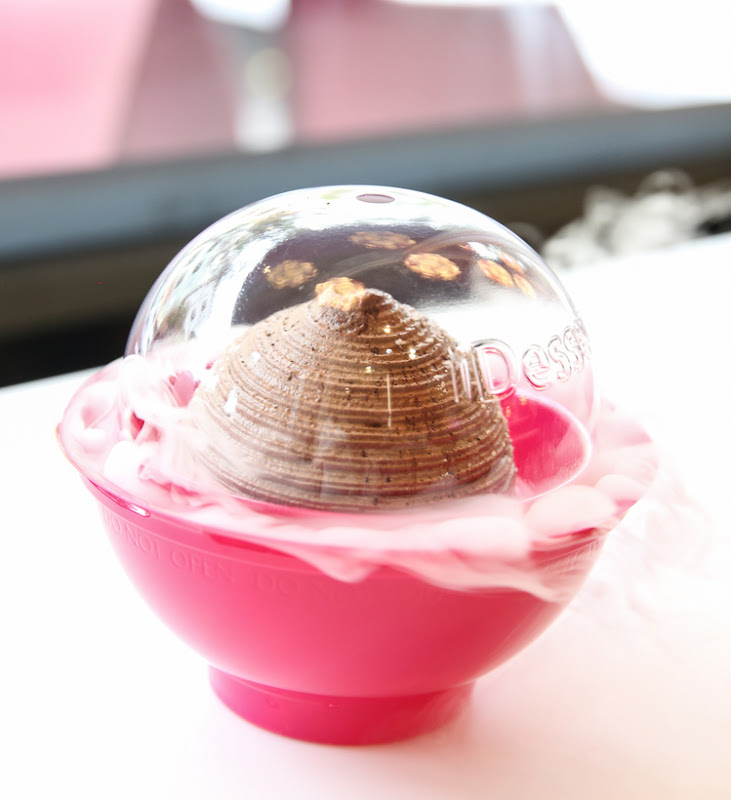 For our second one, we chose the base model and only added on the Vegas bowl because we really do love the dry ice effect. I originally had planned on trying a different flavor shell but then messed up and ended up with the same one. I really enjoyed the coconut ice cream inside. Honestly this was quite good and I didn’t feel the need for the additional cake and toppings. 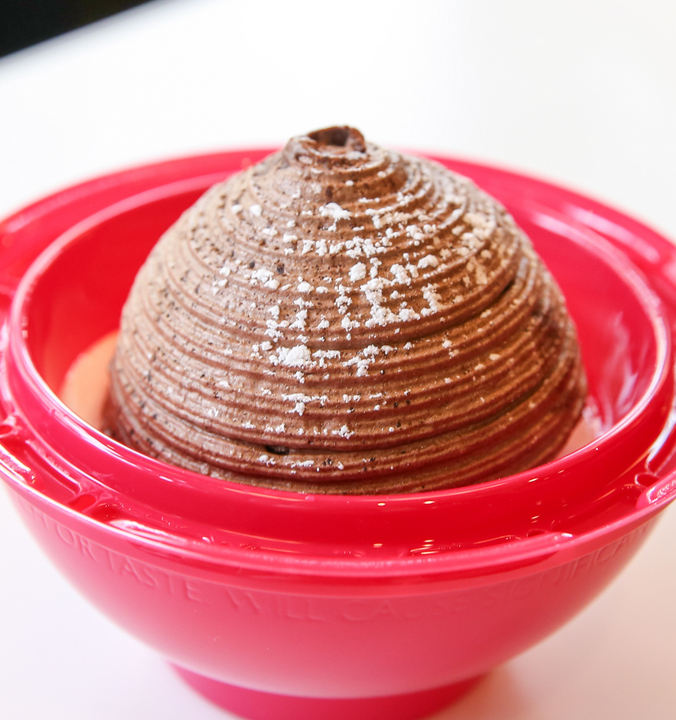 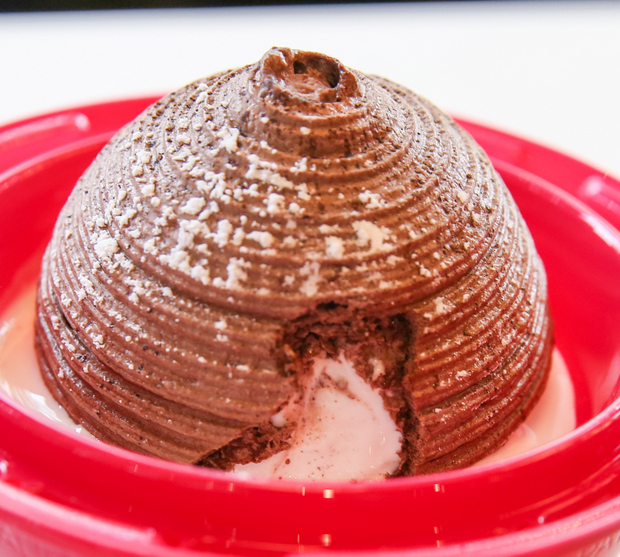 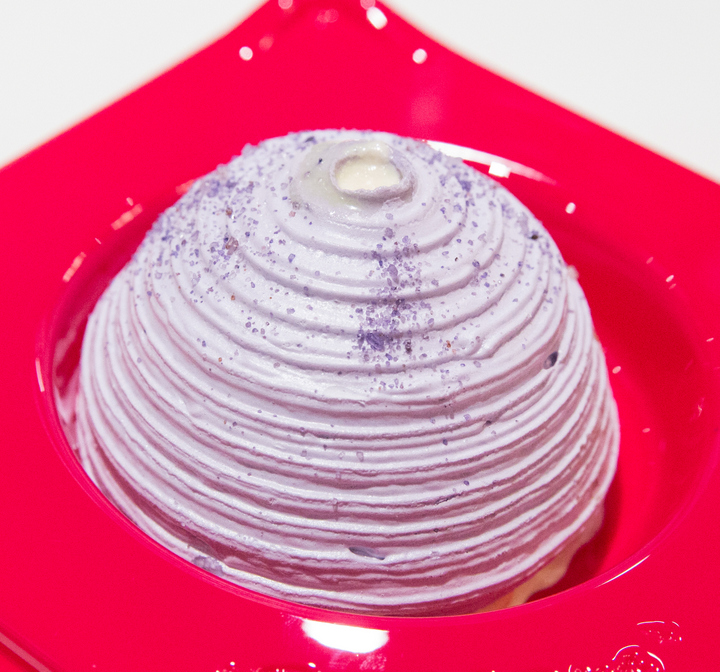 A mere one day later, we returned because I was determined to try another shell flavor. This time we didn’t upgrade to the dry ice bowl. I thought the creation would still be served in a bowl, just without the dry ice. Instead, it’s served in a square plate. I wish they had still served in in the bowl because I was a little disappointed in this presentation. The dessert looked much plainer sitting in the plate and the wide plate size made the dessert look quite small too. 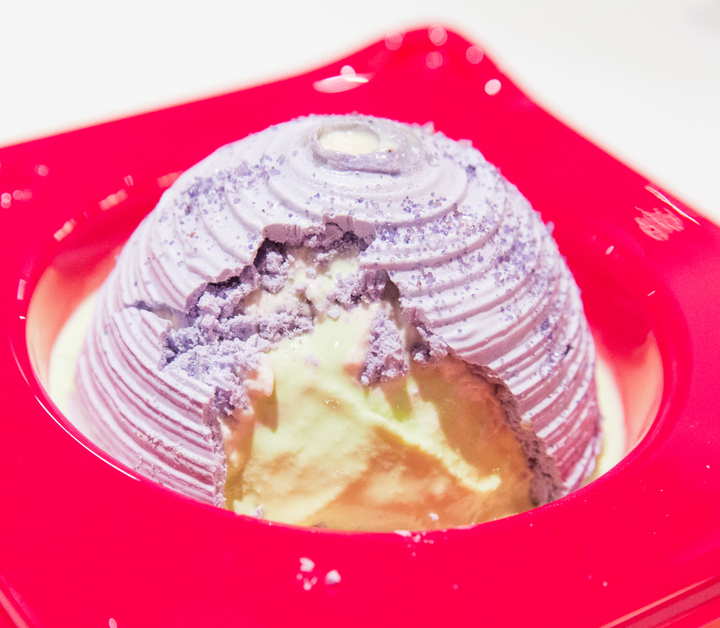 I did enjoy the dessert though. It’s hard to see the strawberry sauce from this photo, but it’s definitely there lightly covering the ice cream, just underneath the shell.

Overall, we enjoyed our visits here. We might not be by all the time as it is in the heart of Little Italy and we don’t spend too much time in that area, but it’s somewhere we’d take friends or visit if we are nearby. As an added bonus, you’ll likely see Chef Jean-Philippe himself. He was there on both of our visits and was kind enough to take a photo with us. I’m pretty sure I babbled like an idiot upon meeting him.

6 comments on “iDessert By Jean-Philippe”