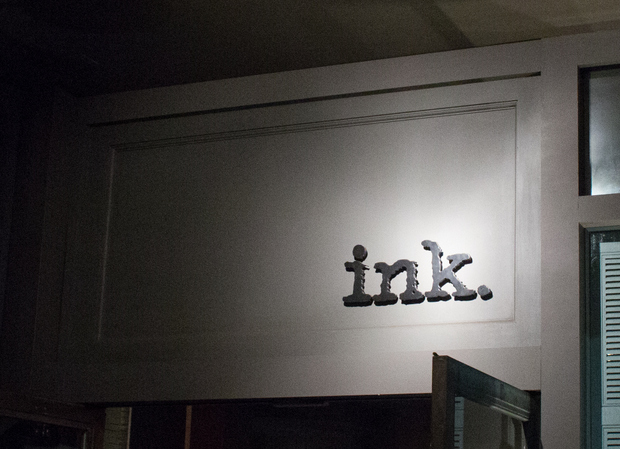 Back in December of last year, we had a very memorable meal with our friends at Ink. The restaurant is owned by Michael Voltaggio (Top Chef Season Six winner) and has received numerous accolades, including being named by GQ in 2013 as the Best New Restaurant in America. The current Season 12 Top Chef finalist, Mei Lin (I’m totally rooting for her!), trained as a sous chef at Ink until joining the show.

The interior is quite dark. We were seated at a long table with black metal chairs. It was not the most comfortable setting, but that was soon forgotten once the food came out.

The restaurant menu is Chef Voltaggio’s take on “modern L.A. cuisine,” focusing on small shareable plates that show off his creativity and use of new cooking techniques. 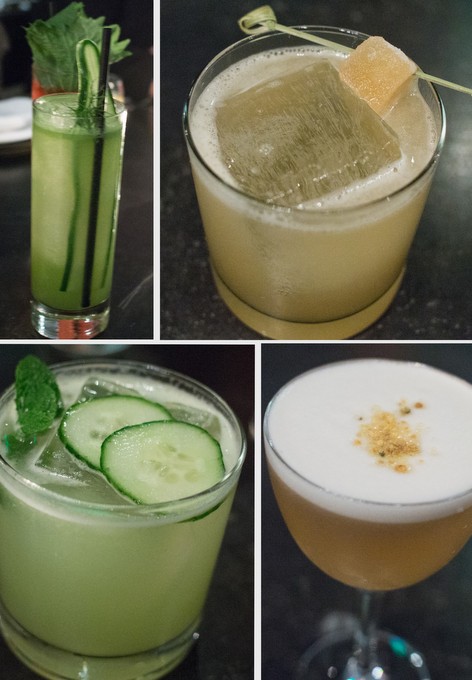 Some cocktails to start our evening. 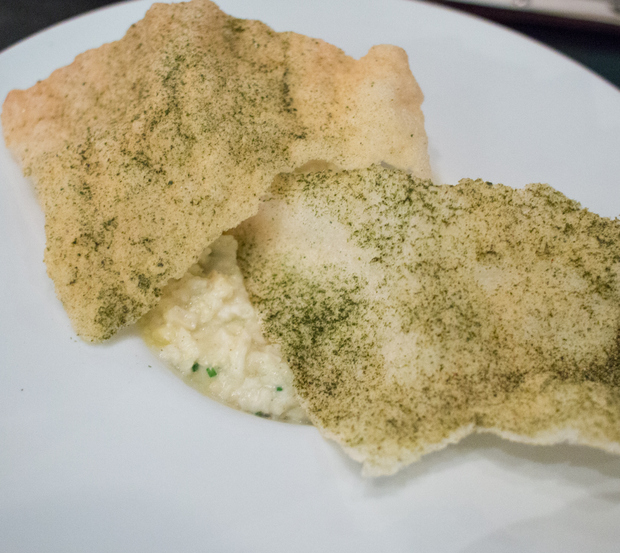 Our first dish was a bed of corn mash, topped with two giant corn tortilla chips dusted with nori. While the corn tortilla chips is their take on Doritos, it didn’t really remind me of Doritos. They were enjoyable though and I liked the strong seaweed flavor, evoking fond memories from my childhood when I used to consume copious amounts of roasted nori as a snack. I did find the corn mash to be a tad too sweet. 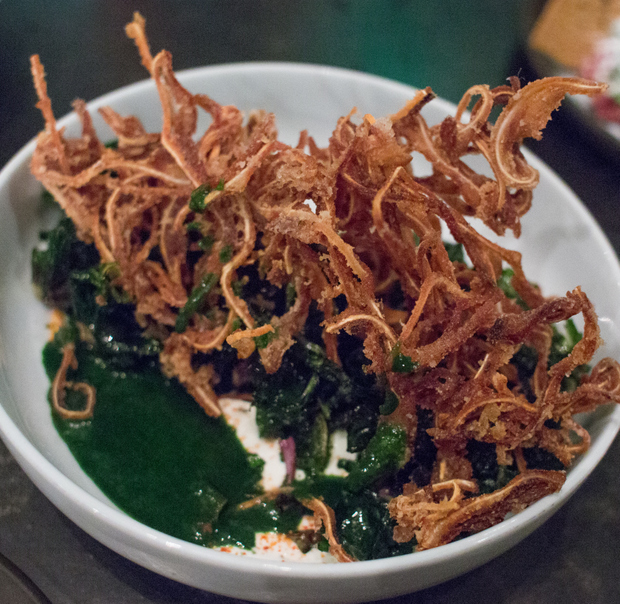 This wasn’t quite what I envisioned when I read lollipop kale on the menu, but it was an interesting preparation. On the bottom is a dark green kale sauce mixed with creme fraiche to form a creamy, tangy dressing for the crisp lollipop kale leaves (lollipop kale is a cross between red kale and brussels sprouts) that lay gently on top. Sitting directly on top of the kale was a large bundle of deep fried pig ears. Crunching into the pig ears does feel like biting into a solid lollipop, but at times I felt the pig ears were overly crunchy, which led to occasional uncomfortable stabs from pieces my mouth was trying to break down. I also missed the natural chewy texture of pig ears. 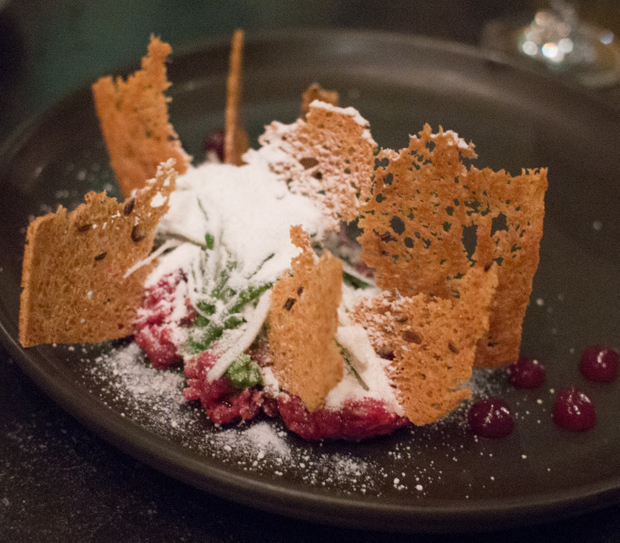 This was a well composed and balanced dish, though not as memorable as the dishes to come. I do remember liking the creamy texture of the tartare mixed with just the right amount of horseradish. 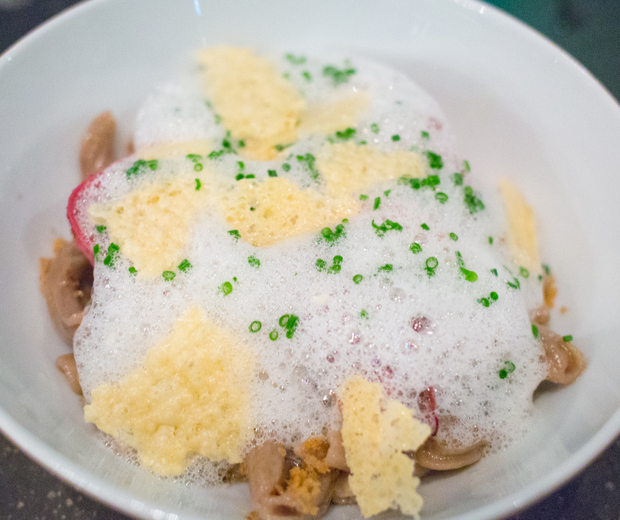 This is a modernist’s take on the classic pastrami sandwich, with cured slices of beef tongue and rye pasta. Perhaps it was because we had experienced the legendary Langer’s earlier that day for lunch, but this didn’t quite work for me, though the beef tongue was tasty. 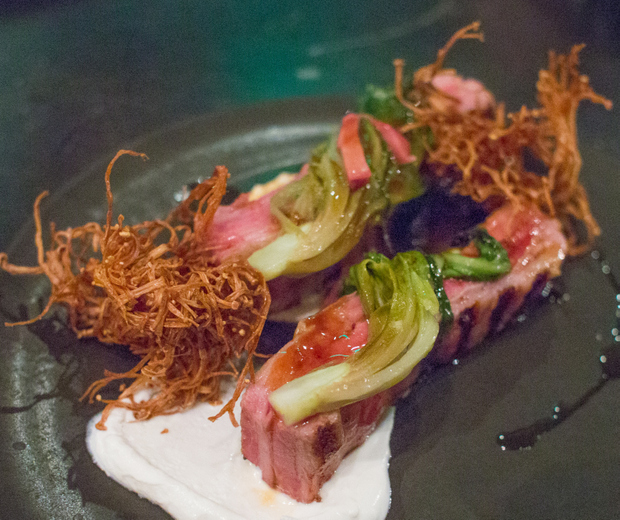 I have to confess, I have absolutely no recollection of this dish. It was a surprise to me when I saw it in my photos. I think it had the misfortune of arriving at the same time as the next dish which I still can’t stop thinking about. 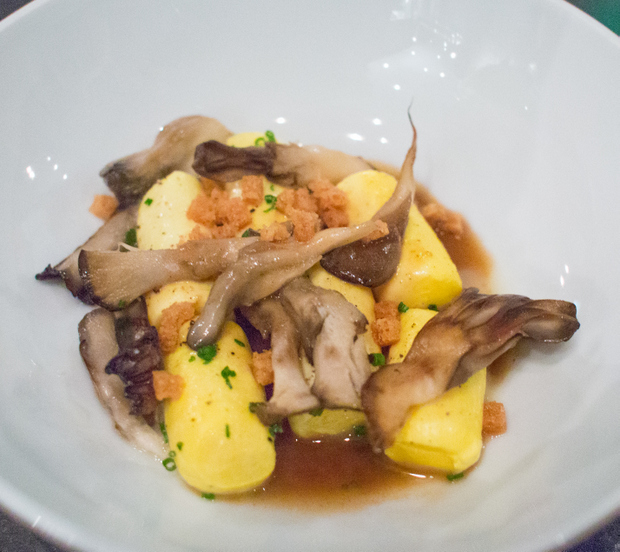 Of course, my favorite dishes were our final two dishes. This is not your ordinary gnocchi, which is traditionally made of potatoes. Instead, the pasta is made solely of egg yolks, olive oil and salt. The gnocchi are deliberately undercooked, leaving a liquified yolk center in each one. I could not stop marveling at the texture and taste. Pure genius. 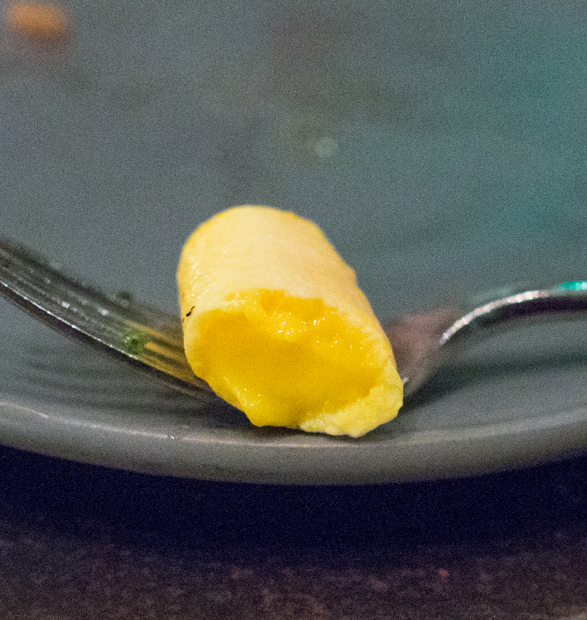 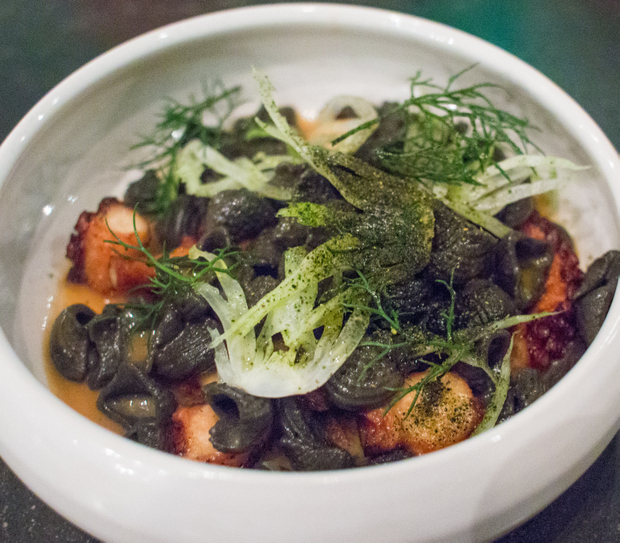 Yes there were charred octopus tentacles and some other items in here, but the star was the pasta. Perfectly cooked squid ink pasta shells that tasted of the sea. I just couldn’t get enough of it. 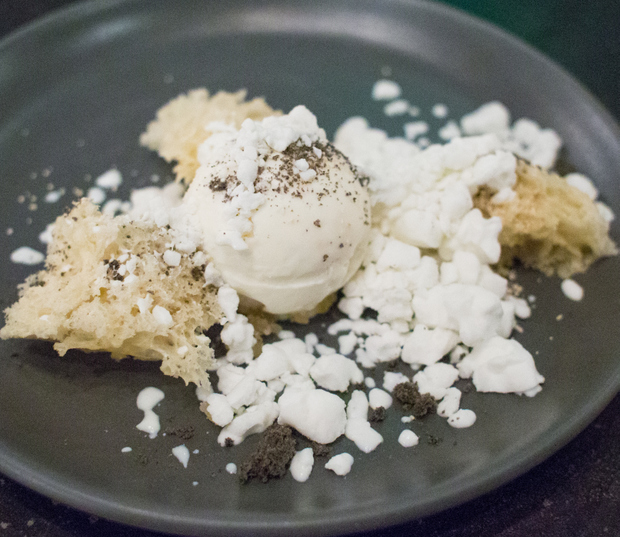 We ended the evening with two desserts, and we opted to try the two most unusual sounding ones on the menu. I found the cake slightly dry, but overall enjoyed the dessert. 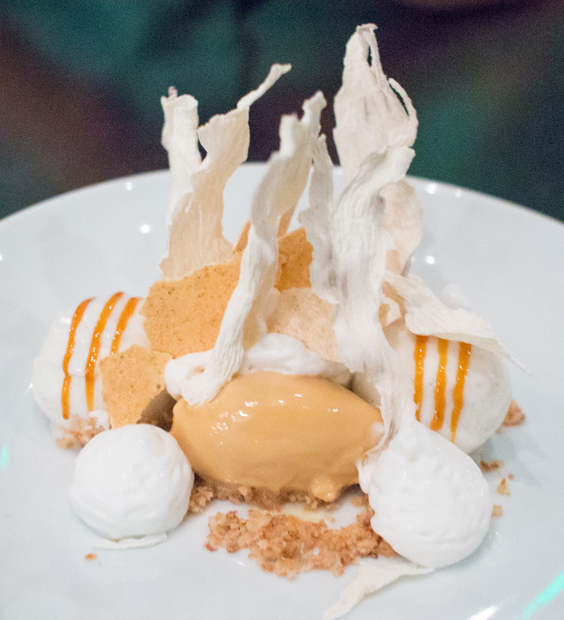 Of the two, I preferred this dessert, with its whimsical presentation. It arrived looking like a piece of art that I didn’t want to ruin. I especially loved the look of the wavy coconut sheets.

Overall, we had a very good meal here and it was especially fun to share it with good friends. Unfortunately, Michael Voltaggio was not in the kitchen that night, so we didn’t get to meet him. I think now that the restaurant has settled in, he isn’t around as much. No matter though, since his staff does an excellent job of executing his vision.

If I had one complaint, it would be that I found the service a little underwhelming. Crumbs were left on the table and never cleared in between dishes. Also, one of our friends has an alcohol allergy. He ordered a non-alcoholic mixed drink, but it appears there may have been some tainting with the materials used to make his drink because halfway into the dinner, it was clear he was suffering from some sort of allergic reaction. While it wasn’t a severe reaction, he was obviously uncomfortable and had to make a much needed stop to the pharmacy immediately after dinner. When it was brought to the attention of our server, other than reassuring us that the non-alcoholic drinks are not made with the same equipment, she seemed unconcerned by our friend’s allergy. He didn’t want to make a big deal out of it; I’m not sure I would have been as kind.