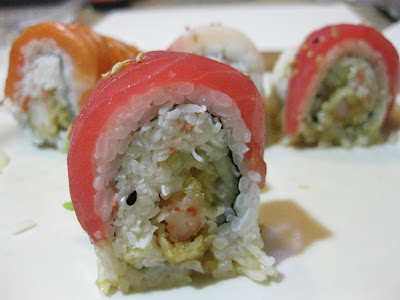 KI Sushi is a little sushi place located inside the Costa Verde plaza.  It is about the only food place inside the Costa Verde plaza that I enjoy eating at. The boyfriend and I come here every so often when we are craving a quick sushi fix because this place is nearby.  On this occasion we got our food to go, so I don't have any pictures of the interior.  You can find some pictures on their website, along with their menu, including pictures of their rolls.  I was going to scan the paper menu, but the ones provided on their website are much better.

There used to be a Samurai Sam's in this location.  When I saw that they were turning the location into a sushi place, I was a bit skeptical.  However, I have been pleasantly surprised.  KI Sushi has been open for almost a year now, I think.  While the space is small, they have made the most use of the space, so it doesn't actually look that small.  There are some nice booths and some tables along with a sushi bar.  I love the decoration of the place.  The color theme is silver and black.  They have some small, simple picture frames hanging on the wall, outlines of trees on the wall.  Very simple and modern.

I've never tried any of the entrees, though they seem pretty big in quantity.  I come here mainly for their specialty rolls.  They have quite a few creative rolls and the fish is fresh.  The service is pleasant, though sometimes a bit slow.  The sushi chefs at the bar will greet you when you come in.

On this occasion, we ordered two rolls to go:  the Rainbow roll and the Fantasy roll. 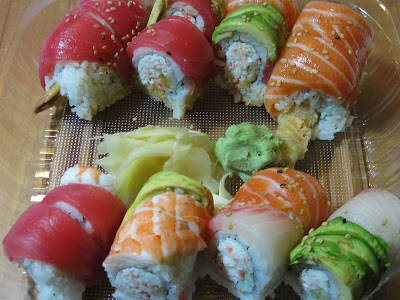 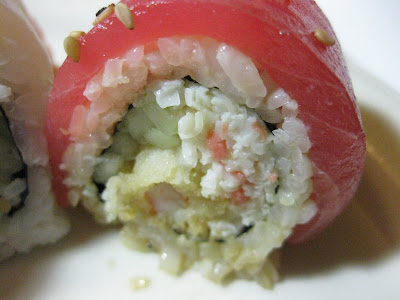 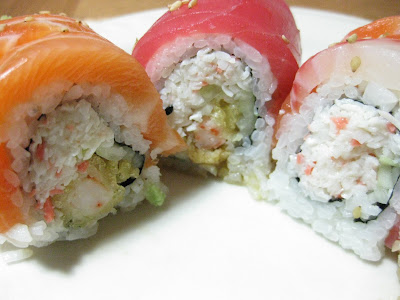 Both rolls were pretty good, though I prefer the Fantasy Roll. Some of my other favorite rolls here include Lobster Dynamite Roll, Green Dragon Roll, Calamari Tempura Roll and the Spicy Fantasy Roll.

I haven't tried their happy hour, but I heard it is pretty popular (4:30-6pm Monday through Friday).  I have been wanting to try their Love Boat specials, which seems like a lot of food for a good price.  So far, the boyfriend and I have not had a chance to try them though.

I did try the plum ice cream once, and I enjoyed it.  Especially because I cannot find the flavor at the grocery store.  It is more like a sorbet, with bits of preserved plum inside.

While this place doesn't have spectacular food and I would not recommend going out of your way to try it, if you are in the area, and are craving some sushi rolls, this is a good place to stop by. 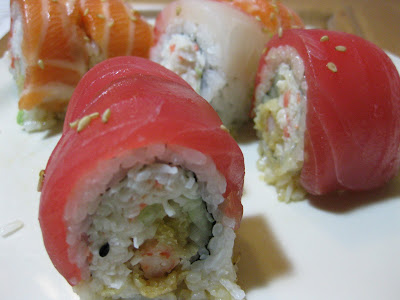