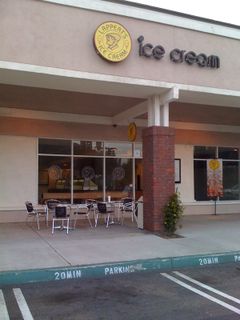 I don't often go out for ice cream, as I usually stock up on ice cream at the grocery store.  However, I will go for ice cream if it's something I can't get at the store.  Lapperts is one of those exceptions.  There are two things I come here for: Macadamia Nut Ice Cream and Dole Whip.

First, a little about this place.  This is apparently a very popular chain in Hawaii, though I have not visited the Hawaii locations.  The ice cream is made in Hawaii and shipped over.  The location of this place is a little strange.  I don't think it's a very popular strip mall, so this place does not seem to generate a lot of traffic.  The employee in the store always seems friendly and chats about the store and the ice cream.  Apparently the ice cream here boasts a higher butterfat content than Haagen Dazs.  This store offers a variety of sorbets and ice cream flavors.  They have a whole section devoted to what I consider Hawaii flavors: coconut, macadamia nut and kona coffee.  They also supposedly serve shaved ice, though I have yet to see it.  And dole whip! More about that later.  I, unfortunately, don't have many photos of this place.  It's a bit out of the way for me.  It is nearby my boyfriend's work though, which is perfect for me.  He'll stop by and get me my favorites.  I asked him to take pictures last time, and he only took one lonely picture of the outside.  Next time I will ask him to take pictures of the Dole Whip and some of the other flavors.

So I've tried some of the other flavors, and they are just okay.  The sorbets do have a very natural fruit taste, as opposed to tons of sugar and artificial flavors.  For example, I tried the Guava sorbet once, and it tasted just like Guava.  And just like how guava isn't very sweet, neither was this sorbet. However, as I stated before, I am mainly here for two things: Macadamia nut ice cream and Dole Whip.

Macadamia Nut, Coconut and Kona Coffee:  My love for mac nut ice cream began after a trip to Hawaii. I had never had mac nut ice cream and thought it sounded good.  Unfortunately, the hotel we were staying at had a cafe downstairs that claimed to serve it, but never had it for any of the days of our stay.  Finally, while waiting at the airport for our flight back to SD, my boyfriend saw an ice cream shop that had mac nut ice cream and he bought me a cone.  I loved it! I love vanilla and I love mac nut.  Combined, they are even better!  After that, I searched for it in SD, to no avail.  Then I went to Taiwan for the summer, and low and behold, mac nut ice cream everywhere! And it was by Haagen Dazs.  Unfortunately, Haagen Dazs does not seem to carry the flavor in the States, at least not in San Diego.  So while yelping one day, I typed in macadamia nut ice cream and found a discussion thread about the opening of a new ice cream shop from Hawaii.  I was so excited! So as soon as it opened, my boyfriend and I drove up to Poway to give it a try.  We sampled a bunch of flavors.  Kona coffee was a little too bitter for my tastes, but I think others who like coffee flavored ice cream would enjoy it.  They have many combinations of the three Hawaiian ingredients: coconut, mac nut and kona coffee.  For example, coconut with caramel and mac nut, white chocolate mac nut, kuai pie, toasted coconut, etc.  After trying most of them, my favorite was the vanilla with mac nut, the coco loco (which is toasted coconut.  Very natural tasting.  You definitely taste a lot of toasted coconut.)  ), and the coconut caramel with mac nut.  The employees are very good about letting you combine different flavors.  For example, if you get a scoop, they can give you a half scoop of two different flavors. I usually take a pint home that is half mac nut and half coconut.

Dole Whip.  The other unique offering of this store is their dole whip.  Apparently this is something you can get at Disneyland, though I've never tried it until having it at Lapperts.  I don't really know how to describe it.  It's not exactly a sorbet, though it looks kind of icy like a sorbet.  It manages to be creamy and icy and fruity all at the same time.  It's made from dehydrated pineapples.  Apparently nothing else is added to it, so it's a lot healthier than ice cream and sorbets.  It's sweet and tastes like pineapple of course.  But it also kind of tastes like ice cream. Hopefully, I'll have some pictures to show next time.