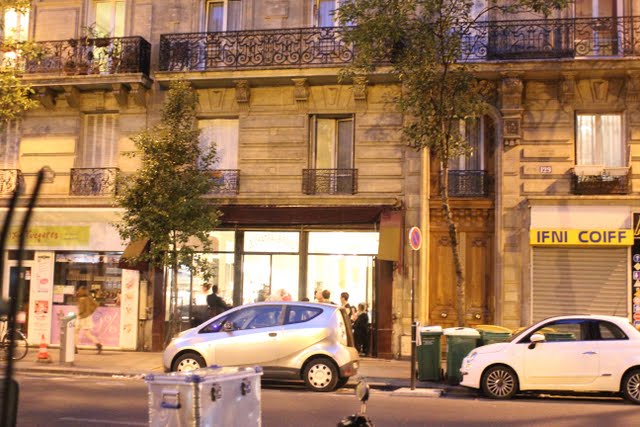 Le Chateaubriand is ranked No. 15 on the 50 World’s Best Restaurants 2012 Guide. During my trip to Paris, I was most excited to check out this neo bistro, with food prepared by a young self-taught chef, Inaki Aizpitarte.

There’s no set menu. Instead, diners eat the chef’s inspired menu of the day. The setting is quite sparse and minimalist. Definitely not what one would expect for one of the world’s best restaurants. But I liked the simplicity of it. There was no stuffiness, no intimidation, and welcomes patrons from all walks of life.

Chef Inaki Aizpitartey was easy to spot. He’s extremely tall, with a stubble and a devil-may-not-care attitude about him. 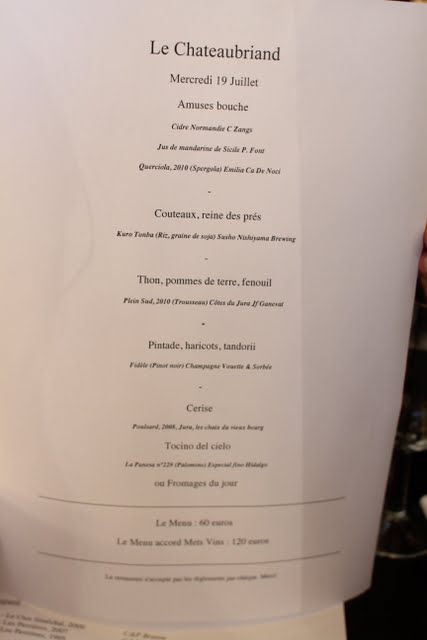 Once seated, we were given the menu of the day which was written in French. The waiter gladly translated everything, asked if there were any food allergies, and then whisked the piece of paper away to give the same presentation to the next table. 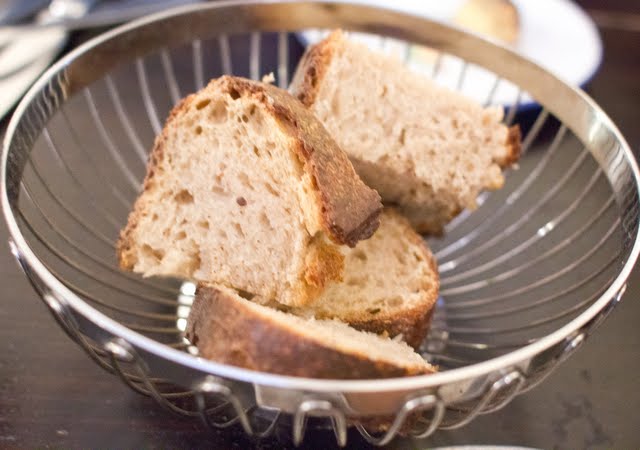 We watched the hot loaves of bread being cut and served to us. It was a little bit burned and probably my least favorite bread served during our Paris trip. 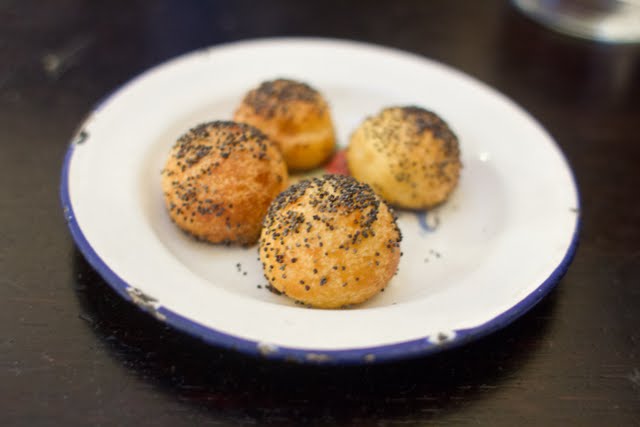 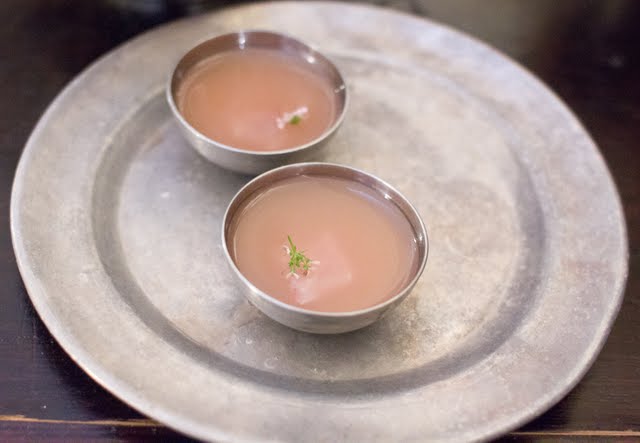 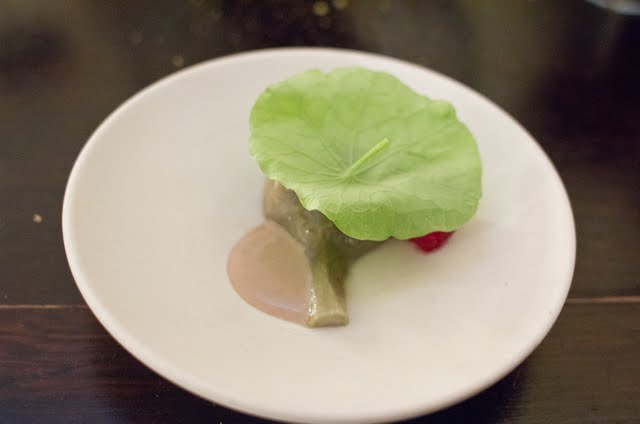 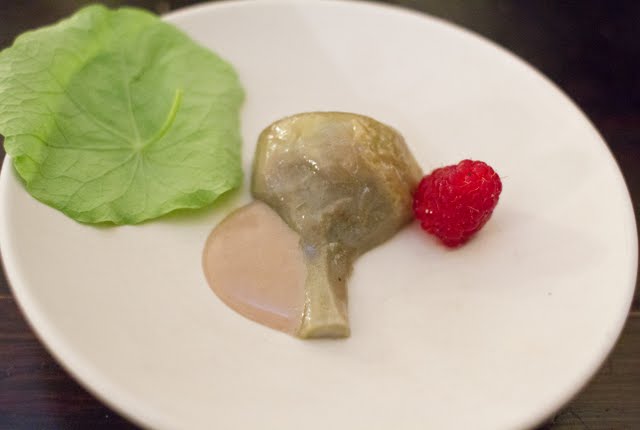 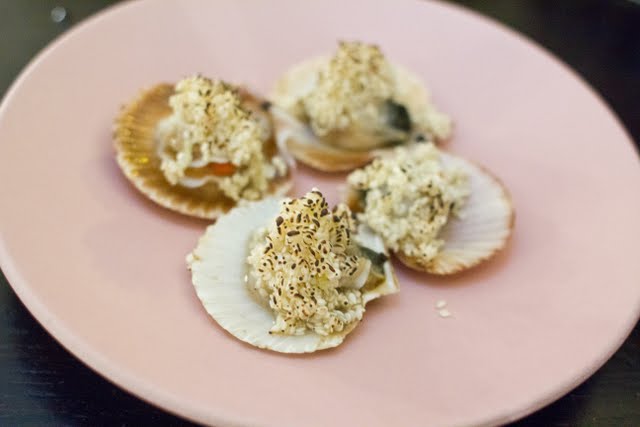 This was my favorite of the five amuse bouches. Cold clams could be slurped up in one bite. 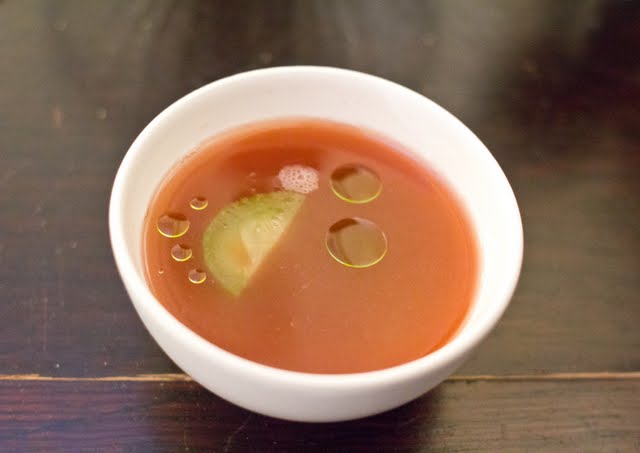 Even though everyone in the restaurant was eating the same menu, the pacing was different for each table. I marveled at the ability of the staff to keep track of who was on which dish since there wasn’t staff assigned to specific tables.

Near the bar of the restaurant there is a small cellar/basement which the staff kept coming from to get supplies and DH really found it amusing watching them enter and exit it. 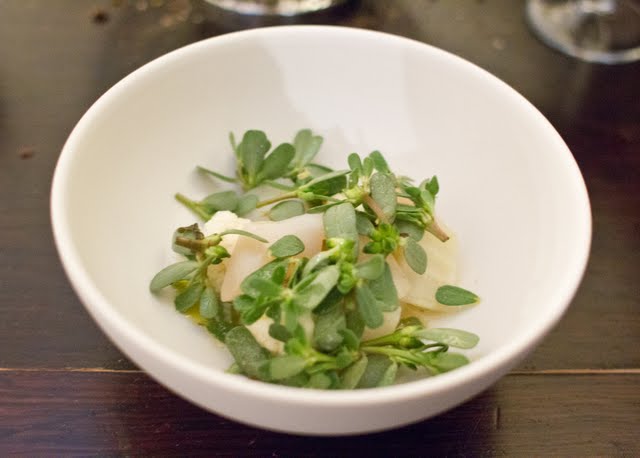 Razor clam salad. I’ve never eaten razor clam prepared this way but I really enjoyed it. The clams were tender and warm and the salad was simple, with some oil and vinegar seasoning the greens. 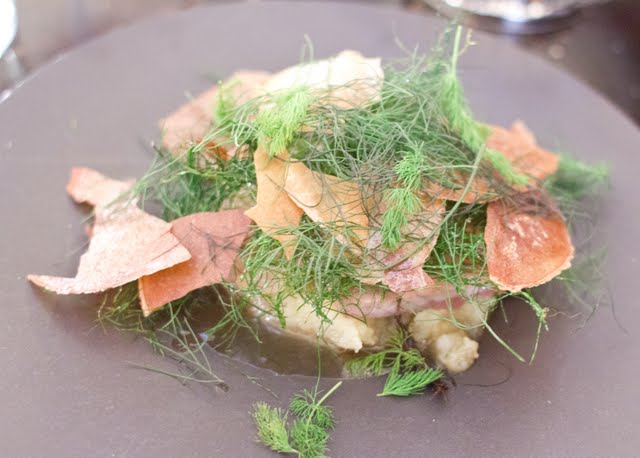 Seared red tuna, mashed potatoes, crispy thin potato slivers, covered in a forest of fresh fennel. I loved the tuna and the potatoes. I could have done with less herbs though. 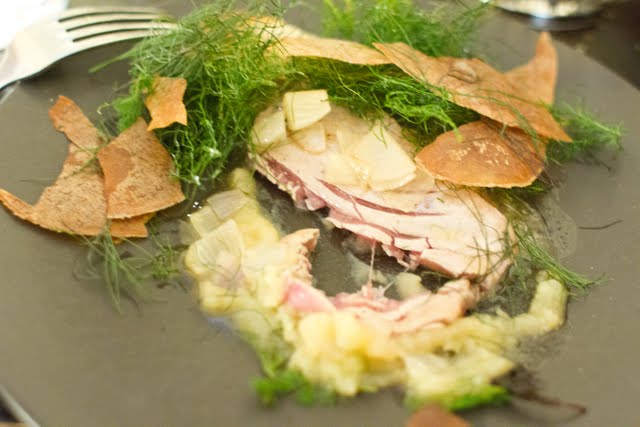 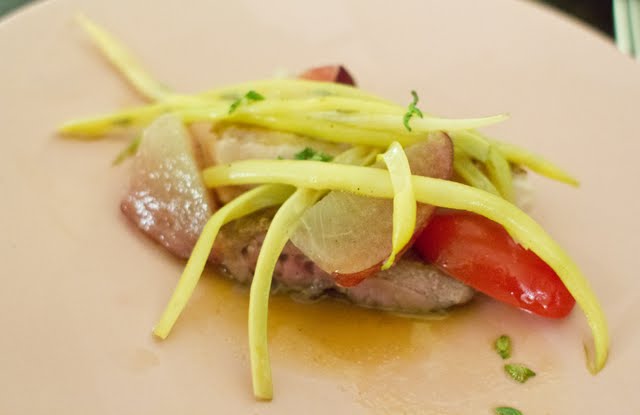 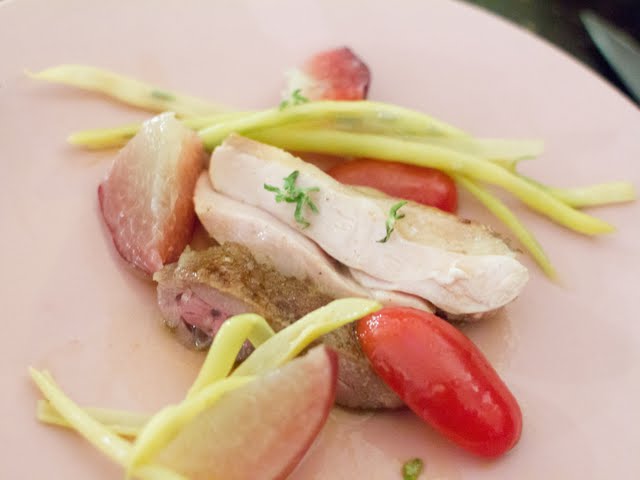 I’ve never eaten plums mixed with meat but the plums added a nice acidity and the tomatoes added a touch of sweetness to the dish. There were so many flavors and tastes dancing in my mouth and it was a nice finale before the desserts.

The one choice of the night was dessert. We decided to get one of each so we could try them both. 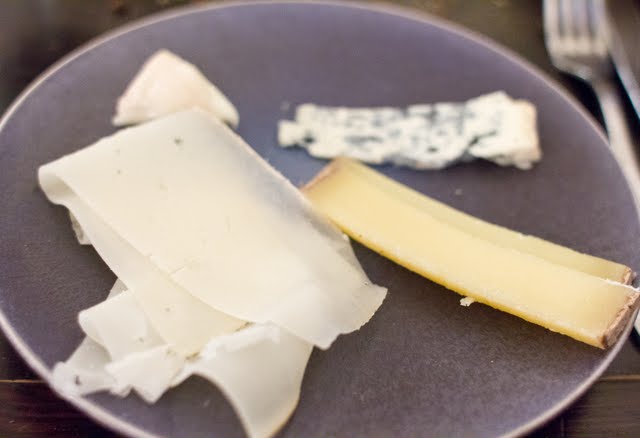 A variety of slivers of cheese. It was too hard to understand the waiter’s rattling the names off but they were all really good. 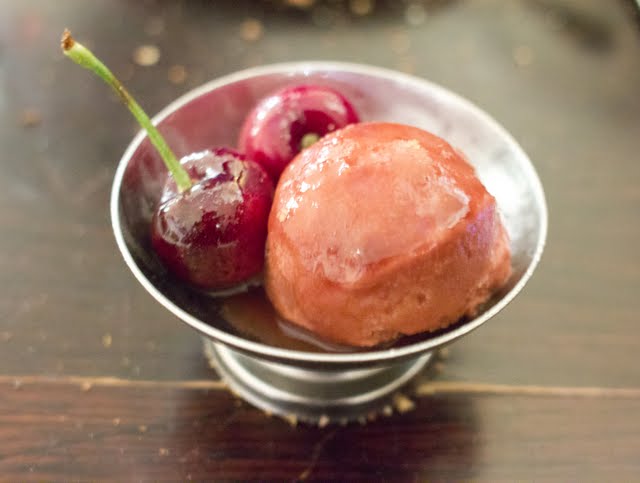 I loved the oversized cherries mixed in with the sorbet which were as sweet and juicy as they appear. The sorbet itself was sweet, tart and slightly alcoholic. We both really enjoyed it and usually DH doesn’t enjoy at any dessert cooked with alcohol. 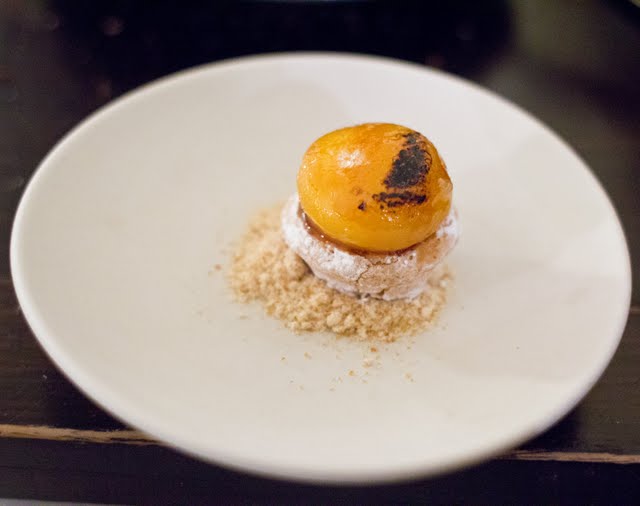 Raw egg yolk on top of a chewy meringue cookie

This was described as a cookie so I didn’t really examine it too closely. But as soon as I cut it open to split it in half I realized that the top part of the “cookie” was actually a perfectly prepared egg yolk that had been slightly carmelized. I’ve never had raw egg yolk mixed in a sweet dessert form but it was actually really enjoyable. The cookie at the bottom was a chewy meringue.

Out of the two dessert choices, I definitely preferred the sorbet and cookie pairing. 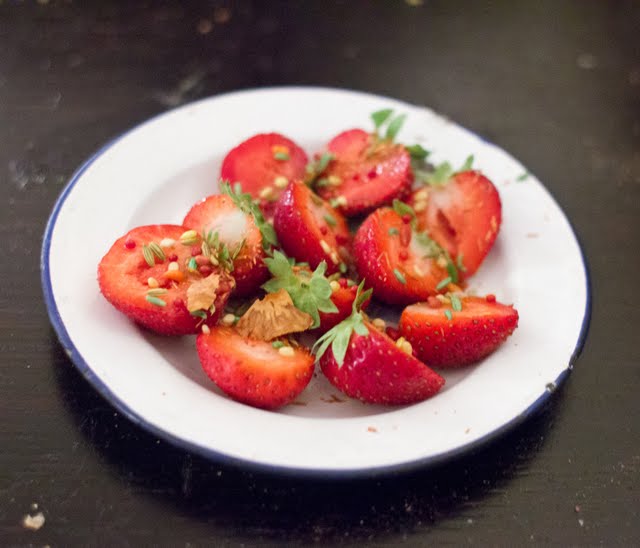 Complimentary plate of strawberries with candy crystals and fennel seeds. These were some of the smallest strawberries I’d ever seen but they tastes so sweet, especially with the sugar crystals that reminded me of nerd candies. The fennel seeds weren’t really my thing but they are the same candied fennel seeds that you sometimes see served after Indian meals.  They are supposed to act as a digestive and breath-freshener. It was a light and sweet finish to end the night.

Despite the busy night, we were left to linger as long as we pleased, which was great because we had taken on the task of ordering an entire bottle of wine for the first time. So for once I was very grateful for the Paris rule of no presenting customers with the check until it’s requested.

The meal was fun and interesting. I liked seeing the innovative use of ingredients and found everything to be quite tasty. Now the million dollar question:

Do I agree with it being ranked # 15 in the world? No. I feel like I would have more than 15 restaurants that I would rank above this one if I had tried all the restaurants in the world.  However, that being said, I definitely think this is worth a visit.

Priced at 60 euros per person, this was actually the cheapest meal we had in Paris as well and a bargain considering it is ranked #15 in the world. Reservations are also not impossible. The restaurant offers two seatings a night, a 7:30 and a 9:30 (at least those were the options when we visited, but I’ve seen different times for the earlier seating on other blogs so I think it changes). You can make a reservation for the earlier seating if you call exactly 2 weeks in advance (listen for the phone message to know what time to call and call exactly at that time. We got through after about 5 minutes). If you want to wait it out, you can wait for the later seating which does not take reservations, but when we left that wait was really long.