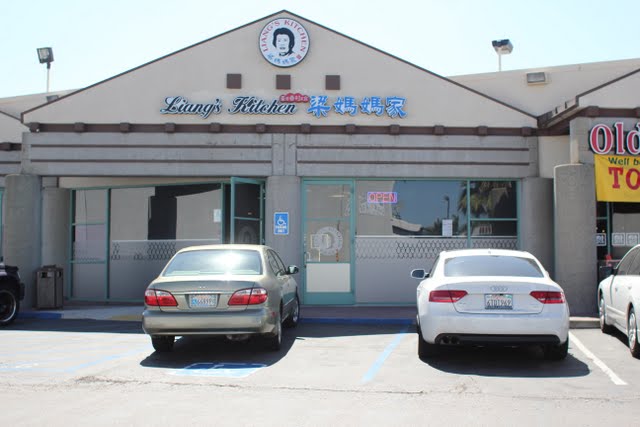 I often get questions from readers asking for a recommendation for Taiwanese food, especially Taiwanese style beef noodle soup and hand pulled noodles. Unfortunately, I usually don’t have a great answer because San Diego is very lacking when it comes to Taiwanese cuisine.

A few weeks ago, a reader Kathy, alerted me that Liang’s Kitchen would soon be opening in San Diego. Liang’s Kitchen is a Taiwanese restaurant chain that has become quite famous in the last year and has opened many successful locations throughout Los Angeles and the Bay Area. They specialize in dishes like beef rolls, beef noodle soup and hand pulled noodles.  While Liang’s Kitchen may not be the best, they are a solid chain . 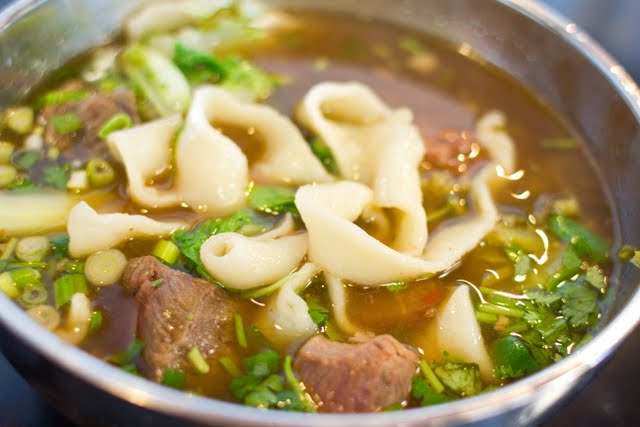 Then another reader Karen, alerted me that Liang’s Kitchen was already open! So fast. So I changed my eating plans to make room for a visit. Liang’s Kitchen is located next to Tajima. Once there, I saw the famous logo of the face of Mama Liang.

The Liang’s chain specializes in “Juan Cun” cuisine.  When Chiang Kai Shek’s army fled to Taiwan after being defeated by the Communist Party the military took up temporary housing camps owned by the government, since they had no idea how long they would be there. These small military villages, known as Juan Cun, were made up of the military and their families. Because these military families came from all different parts of China, they also brought to Taiwan the foods from their own areas in China.  With such a small, tight knit community, it was common to refer to people as “Mama (insert last name).” The villagers began to share the different cuisines and dishes they knew how to cook and soon they began to set up temporary shops outside their homes, selling their food.

According to their website, Mama Liang lived in one these Juan Cun and began making her famous dishes. She is now retired and her son wanted to share her recipes with others.

Of course I had to order the beef noodle soup. Another thing Liang’s Kitchen is most famous for are the hand-pulled noodles which they call “la-pian.” The menu order sheet is written in both English and chinese. For most of the noodle soup dishes you can choose the la-pian noodles or regular noodles. Take note, the English translation/abbreviation for this is “(L or R).” I think some people might confuse this to mean large or regular size, but it’s actually asking you to choose la-pian or regular noodles. If you like hand pulled noodles, which are thick, wide-cut, chewier and doughier than regular noodles, then I definitely recommend getting them. There aren’t many places in San Diego that offer such noodles and they cost the same price for regular or the hand pulled noodles.

I ordered the beef noodle soup with the la pian noodles. One interesting thing about the chain is that they serve the noodle soup in these large metal bowls. I’m not quite sure why. Perhaps a reference back to the old days in the military camps? 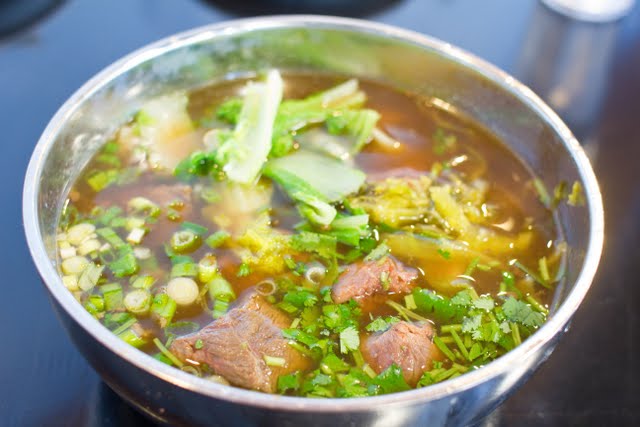 The bowl of noodle soup is pretty big here. It has a little bit of spice, large chunks of tender beef, and some vegetables and sour pickled vegetables, which is typical for Taiwanese style beef noodle soup. I found the broth to be too light for my preference. I prefer a much concentrated beef broth flavor. It was still better than many other beef noodle soup renditions in San Diego though. 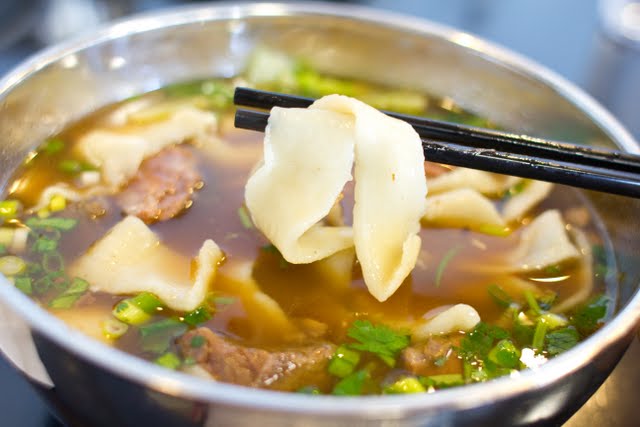 The noodles were thick, wide, and chewy. They were a little inconsistent. Some noodles were too doughy and thick. When I first visited a Liang’s Kitchen chain in Cupertino, I had marveled over how perfect and consistent the hand pulled noodles were. My visits to other chains have also left me very impressed with the noodles. The noodles here didn’t seem quite up to par as some of the other chains. But I still enjoyed them more than any other SD offerings. Because the hand pulled noodles are so dense here, I had a hard time finishing my noodle bowl. These noodles are quite filling.

We also ordered the red pork chop. Fried pork chop is another Taiwanese item. I had never seen a red pork chop though, so I decided to try that instead of the regular fried pork chop. I wish I had stuck to the regular one because I saw several people order it and it looked huge. The red one uses pork meat marinated in a red chinese bbq sauce known as char siu. The pork wasn’t fried crispy enough for me and I wasn’t really a fan. 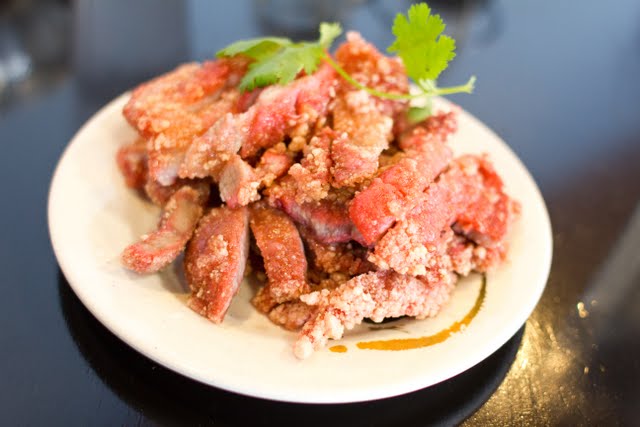 We also ordered the beef roll. This ended up being the best dish from our visit. Liang’s is supposed to be famous for the beef roll. I tried it once at the Cupertino location and was so disappointed, I never ordered it again. However, I decided to give it a go here. And I’m so glad I did. 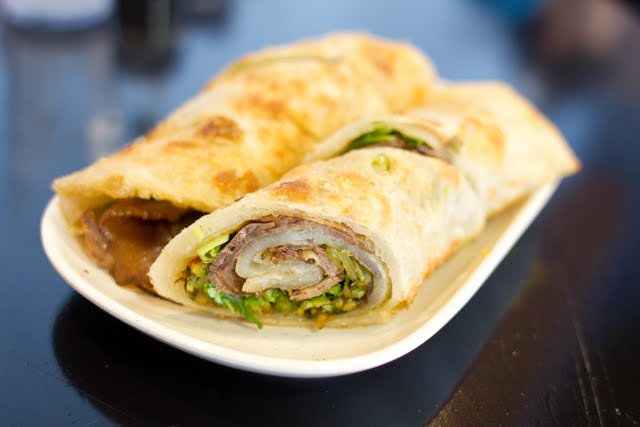 The beef roll was really good. Crispy, savory pancake, tightly wrapped with thin marinated slices of beef, and mixed with a chili cilantro sauce. To date, my favorite beef roll rendition has been the giant ones served at 101 Noodle Express (Irvine and LA). While those still top my favorite, Liang’s comes in as a close second. And I love that they both use the cilanto chili sauce (at Noodle 101 you have to request it as a dipping side though). 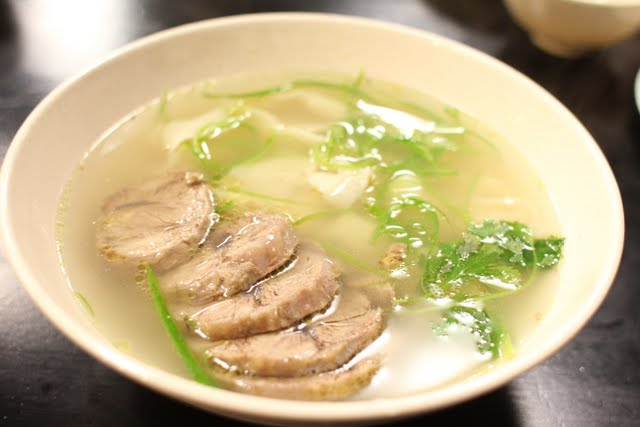 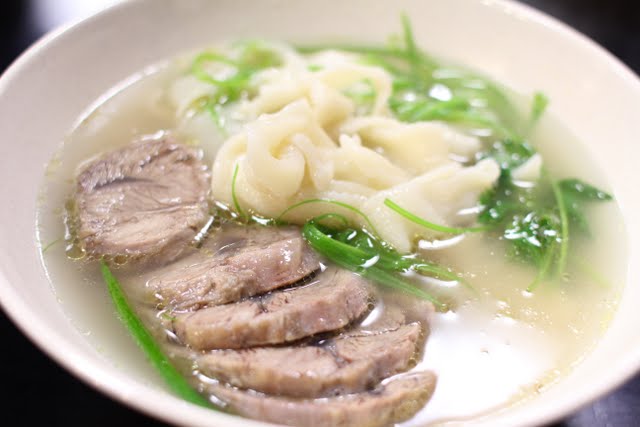 FH got the minced pork with noodles served dry. This noodle dish was decent. Not as good as the version we had at Dai Ho in LA, but a good enough version that I’d get it again. I wish the minced pork was a little more flavorful. Also without an option for la-pian noodles on this, it wasn’t as filling. 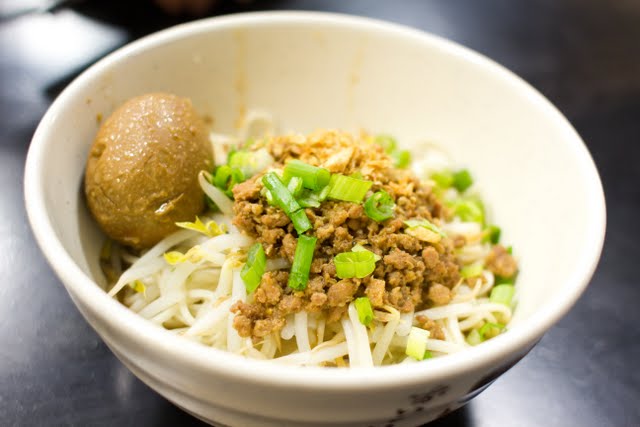 Liang’s Kitchen is definitely still working out some kinks. In addition with serving a limited menu or running out of items on some nights, the staff is still very much in the training process. While there are quite a few servers walking around, most of them appear to be brand new at being servers and were often forgetful. But I think they should learn in time. And since there are so many of them, it’s not hard to flag another one down and repeat your request.

While I didn’t enjoy the food here as much as other Liang’s locations, I think it is a good option when in San Diego for Taiwanese food. I plan on coming back for more of the yummy beef rolls, the hand pulled noodles, and beef noodle soup. I also want to check out their stewed appetizers, fried pork chop, and cold appetizers.