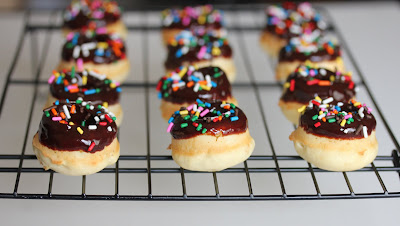 Last weekend, I made mini donuts covered with chocolate ganache. They were a huge hit. It made me want to try out other recipes. Surprisingly, I had a hard time finding a baked donut recipe that wasn’t a “cake” donut. I finally found this recipe by Beachlover Kitchen.

This recipe was easy to put together, about as easy as the mini baked yogurt donuts I had made previously. The dough was a lot thicker though, and really sticky. It made it hard to put the dough into the mini donut pan.  So my donuts ended up not coming out as perfectly shaped as the first time.  The dense batter also maintained its pale color for a long time, so I had to bake them a couple extra minutes because I didn’t like how pale the dough was. 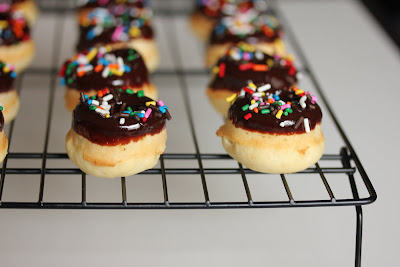 The nice thing about these donuts is that they are more solid than the other ones I made. While the other ones came out with holes on top, and needed to be decorated, these donuts looked pretty cute even before they were decorated (I didn’t have time to take pictures of them before I decorated.) I also enjoyed the taste of these donuts a little more.  When I sampled the previous mini donuts I made, I only liked them after adding the chocolate ganache.  This new recipe, the donuts tasted pretty good on their own.  Once the chocolate ganache was put on top, the two recipes tasted very similar though both in texture and taste. Perhaps this one was a bit sweeter. 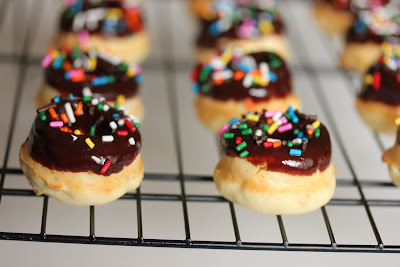 I ended up enjoying both recipes.I’ll probably keep using both until I find a preference for one over the other. Last time I made mini donuts, I had this urge to put sprinkles on top even though I normally don’t like sprinkles on my donuts. So this time, after dipping them in chocolate ganache, I also put on some colorful sprinkles.

I never thought I would have so much fun with my mini donut pan. I own the Norpro
Mini Donut Pan*. I plan on making some more desserts with it soon. 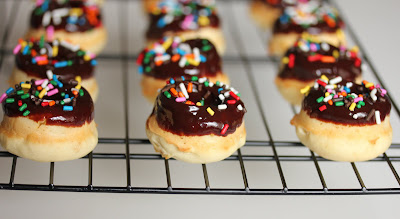 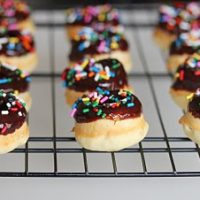 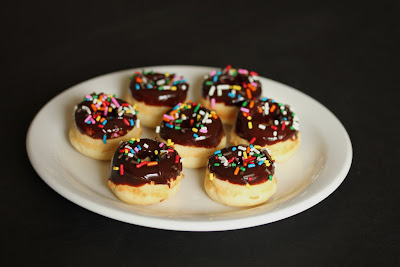