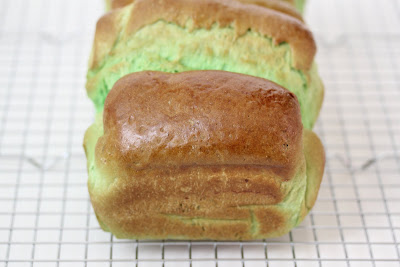 After making my ham and cheese bread, I had enough tangzhong mixture left to make another loaf, so I decided to try making pandan bread.

Pandan is a common flavor used in Filipino, Vietnamese, Malaysian and Thai cuisine. You can make a pandan extract or paste with fresh pandan leaves, but I’ve never done this. Instead, I’ve always used a pandan paste, which can be found at the grocery store. 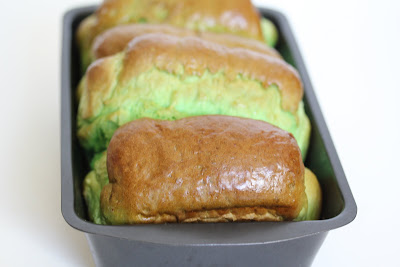 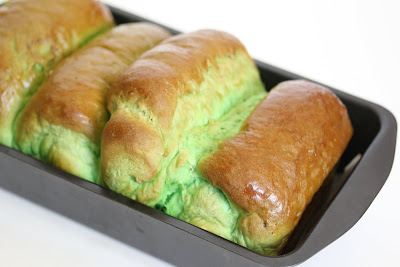 I’ve always found it hard to describe the taste of pandan, but I really love it. And I like the pretty green (though there is food coloring added to the pandan paste to make it look like the colors of pandan leaves).

The bread came out nice and fluffy. I was a little worried after my disaster trying to create a purple sweet potato bread. The pandan taste ended up being pretty mild though even though I thought I used a tad too much extract.
I am submitting this recipe to Yeastspotting. 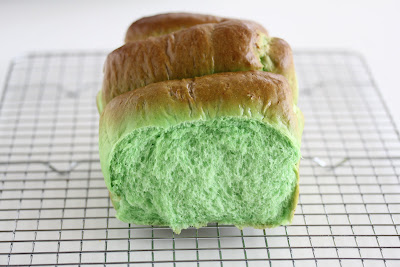 All of the instructions for making pandan bread are in the printable recipe card below, but it’s helpful to see how you should work the dough to get the best results so here are some tips and step-by-step photos: 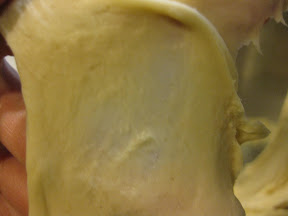 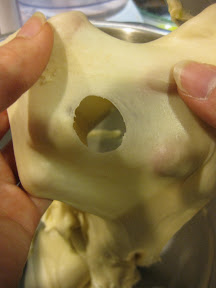 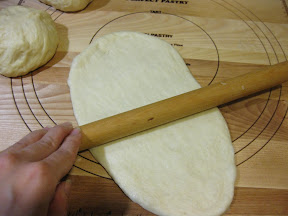 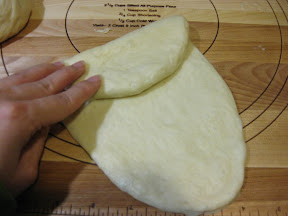 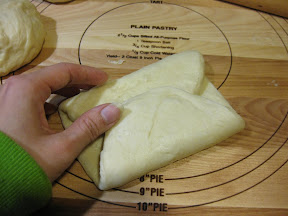 How to Make the Pandan Bread Dough Rolls

Step 1: Once the dough has risen, divide the dough into four equal parts and form them into balls. They need to rest for 15 minutes.

Step 2: After they’ve rested, start by rolling each dough ball into an oval shape.

Step 3: Fold one end of the dough to the middle of the oval. 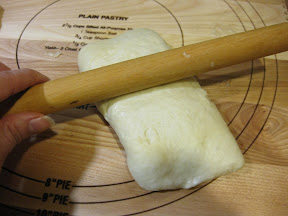 Step 5: Turn the dough over and roll it out with your rolling pin. 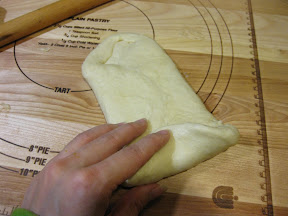 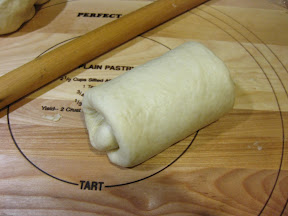 Step 6: The last step is rolling the dough up like a swiss roll by starting at one end and rolling it into itself.
Step 7: At this point, you can put the dough in the pan and let it rise before you bake it. 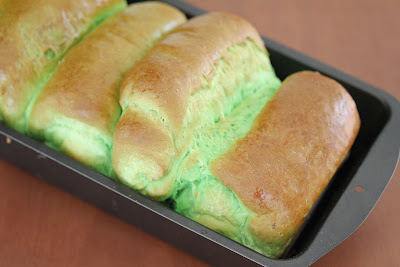 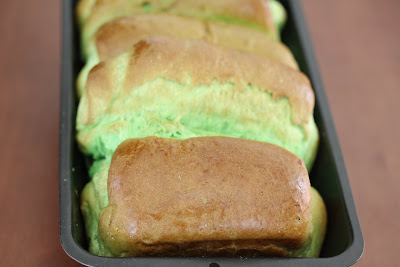 I like to brush the dough with an egg wash before I bake it so it has a nice shiny exterior. I hope you enjoy this pandan bread!

Servings: 6 slices
Prep Time: 30 minutes
Cook Time: 30 minutes
Course: Breakfast
Cuisine: Japanese
The unique flavor of pandan is hard to explain, but its one that I love. It's a common flavor used in Filipino, Vietnamese, Malaysian and Thai cuisine and you can usually find pandan paste at specialty grocery stores. This bread gets its soft and fluffy texture from tangzhong and I've linked to the recipe (see note section), so plan to make it ahead. It's best used as soon as possible, but it will keep in the refrigerator for up to one day.
Print Pin Rate

For the tangzhong (which is a mixture of flour and water that is cooked to a certain temperature), follow the instructions for just the tangzhong and not the whole bread. You only need 120 grams (about half of the recipe) of tangzhong for this recipe and so store the leftovers in the refrigerator for up to 24 hours. Recipe adapted from two recipes from Christine's Recipes: Japanese Style Bacon and Cheese Bread and Hokkaido Milk Toast

Did you make this recipe?I'd love to see it! Mention @KirbieCravings and tag #kirbiecravings!
Posted in: Bread, Recipes
6 Comments // Leave a Comment »