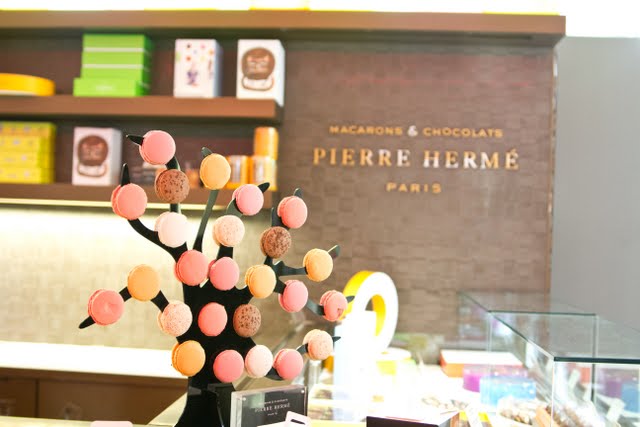 One of the many things I was most looking forward to eating in Paris were French macarons. While French macarons can be found in virtually every pastry shop in Paris, the two most famous stores are Laduree and Pierre Hermé (not to be confused with Hermes clothing, which DH kept mistaking one for the other). 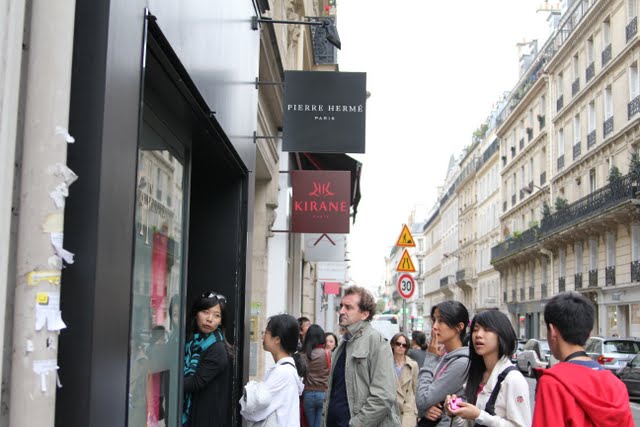 I was most excited about trying Pierre Herme’s macarons and we made out first visit within 24 hours of landing in Paris. We would be back multiple times during our trip. 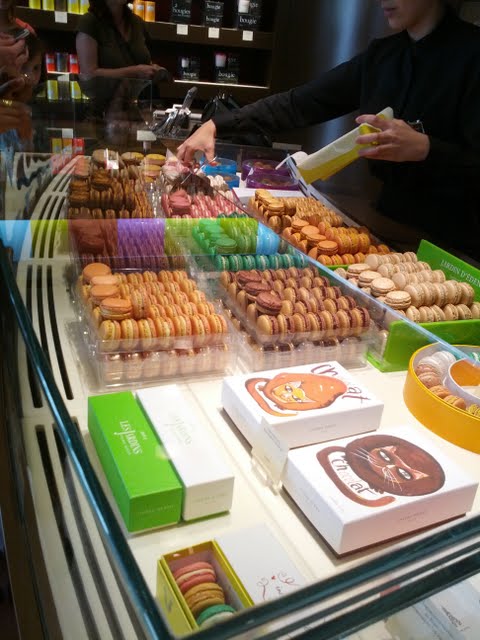 On our first visit, we went to the Patisserie on Bonaparte, which is a much bigger location than some of the boutiques which only carry macarons and chocolates. There was a small line outside the door and I knew I was in the right place. 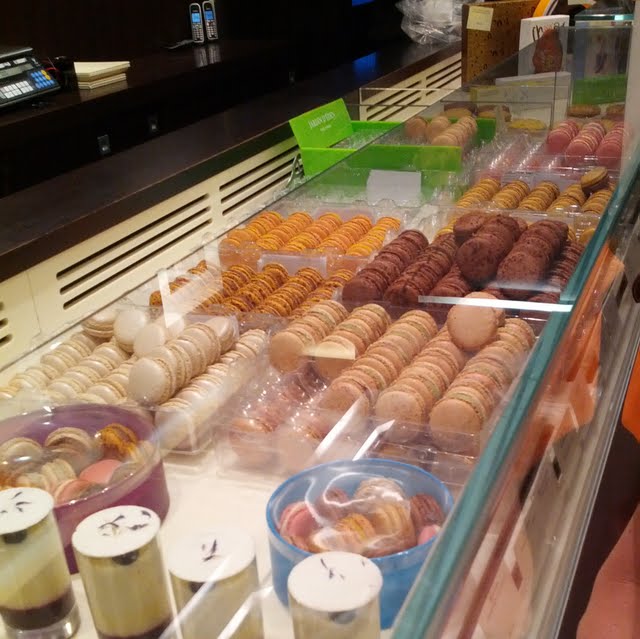 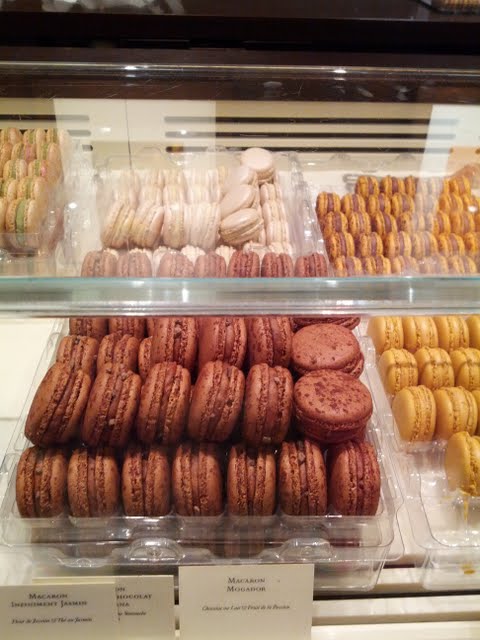 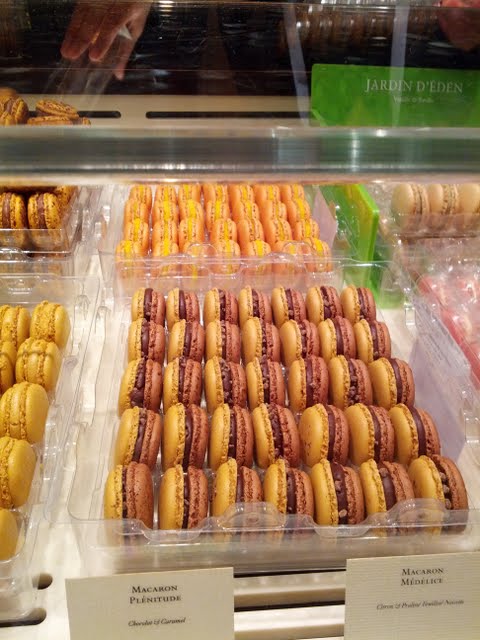 Right away, I could see what all the fuss was about. Rows upon rows of brightly colored macarons filled the display case. It felt like Christmas. I was originally thinking of getting some chocolates or other goods, but it seemed every single person was in line for the macarons only, so I soon followed suit. 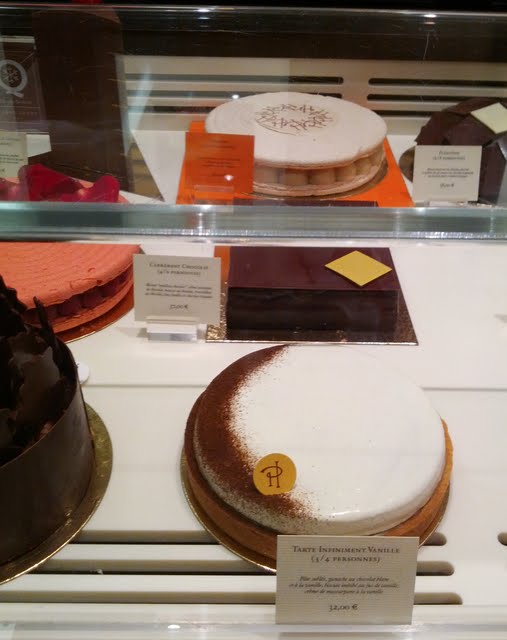 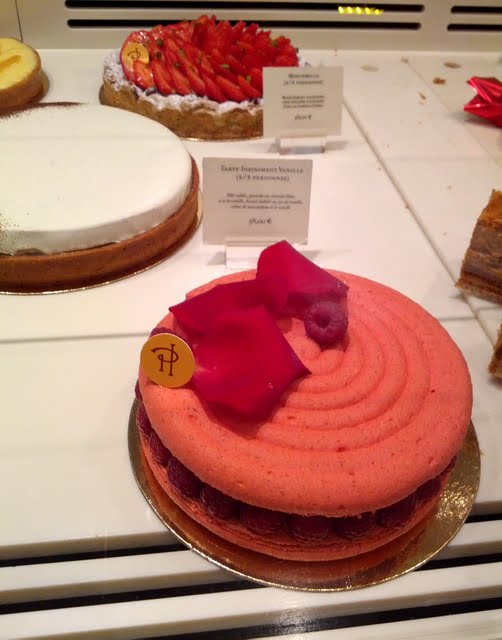 On our first visit, we only bought a few to sample. Once we realized how good they were, we visited one of the boutiques and bought more than a dozen to munch on during our stay. At some point we ran out and made another visit to another boutique. And finally the morning before we left to go back, we stopped by yet another boutique to bring some home for ourselves and for some macaron enthusiast friends. 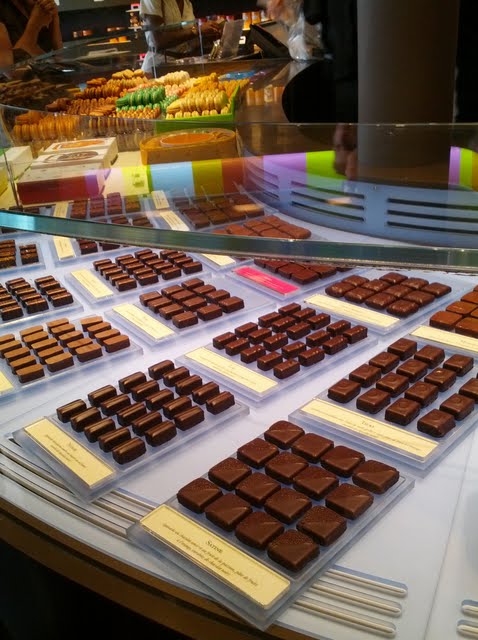 So after consuming quite a few Pierre Herme macarons, I was able to dissect and analyze what makes these macarons stand out and why they are worth the hype.

1. The variety. Most bakeries sell the same boring flavors: chocolate, vanilla, hazelnut, pistachio, etc. Pierre Herme is much more creative with his flavors, often combing several unique flavors into one macaron.  For example, the MÉTISSÉ  is a mix of Orange, & Carrot with Ceylon Cinnamon.  The MOSAÏC is a mix of Pistachio, Ceylon Cinnamon & Morello Cherries. 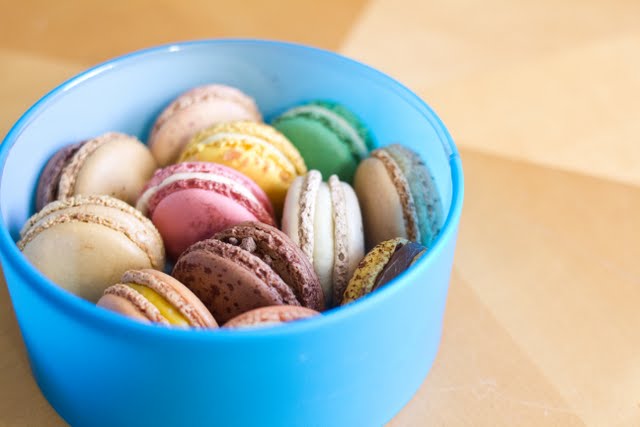 2. Intense flavors- Bite into a Pierre Macaron and your senses are hit with the powerful flavors that are all somehow compacted into these bite-sized morsels. Every flavor described for his macarons can be tasted, and they also taste quite natural too.

3. The filling- Usually my favorite part of the macaron is the chewy shell. I don’t care much for the fillings and I often will break open a macaron like an Oreo cookie, eat the shells, and scrape off part of the filling. Pierre Herme’s macarons are tightly compacted, making it almost impossible to remove the shell from the filling without breaking it, but really you don’t want to do that anyway because the key to Pierre’s macarons is in the filling. The shells themselves are very delicate, and don’t have much of a chew. This bothered me at first, but the chewiness is provided by the filling. The filling is also where most of the flavor is and it’s not too cloyingly sweet like some other macarons I’ve had. The texture of the filling is quite different than other macarons I’ve eaten and I’m not quite sure how he creates the paste/ganache/cream fillings. Despite these being French macarons, Pierre Herme actually uses the Italian method of making them. He does have a book which has been translated to English which details his macaron recipes but I’ve read reviews that the recipes are still quite frustrating and hard to understand. 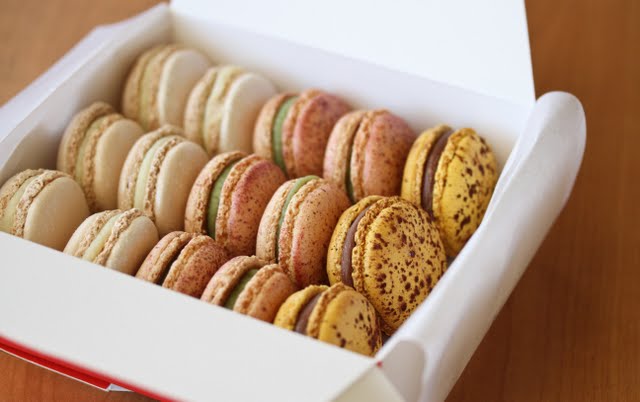 The macarons are not cheap, but macarons seldom are. I actually thought the prices were quite reasonable after seeing far inferior macarons priced around the same. If you are eating them right away, it’s actually cheaper to buy them by weight and it ends up being about 1.7 euro each (around $2.16 at the conversion rate during our stay) per macaron. If you are giving them as a gift, they have ones that come in Pierre Macaron boxes and end up costing a lot more depending on the box you buy, and is about 2 euro per macaron (~$2.50). But at least the box helps keep the delicate creatures from breaking during transportation.

I love every flavor I tried, but my favorites were Mosaïc and Infiniment Jasmin. They were also the prettiest in my opinion, with the shimmery powder on the shells. 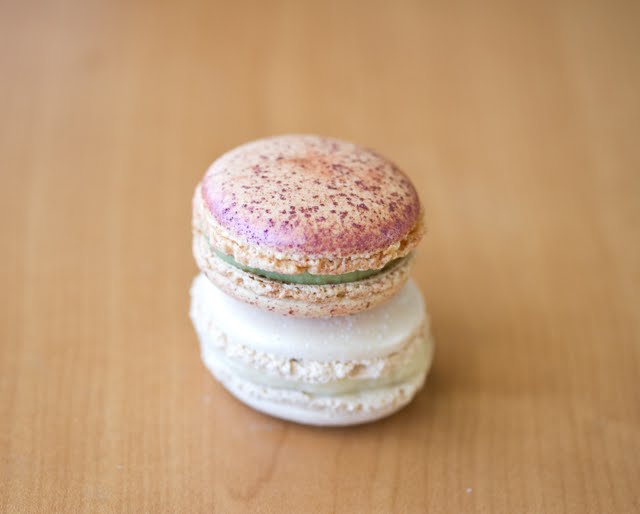 Another tip, the boutiques are not nearly as crowded as the main Patisserie on Bonaparte and they offer the same selection of flavors. I believe Pierre Herme offers 12 flavors at any given time and rotates them with seasonal changes or when limited edition ones are produced.