Popovers, also known as Yorkshire puddings, are light and airy and easy to make. They puff up when they bake for a fun presentation. They’re a great side dish that’s easier to make than dinner rolls. 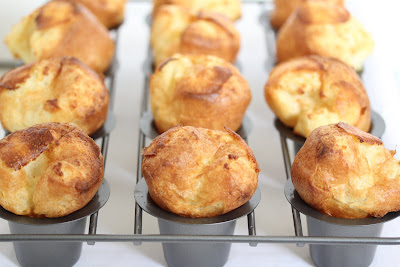 I really loved the popovers I made last time, but I wanted to experiment with other recipes. I initially wanted to try a recipe provided by Neiman Marcus for the popovers they serve at their cafe, but after reading the recipe, it seemed too complicated after the easy popovers I had previously made.

So, instead of the Neiman Marcus recipe, I chose a popover recipe I found on Umami Girl, which she adapted from Gourmet Magazine. I made a couple of adjustments to the recipe and the instructions based on my previous popover baking experience.

If you haven’t had popovers before, they are a very light and airy bread. They are almost hollow on the inside, and the outside is a chewy bread crust.  The name comes from the fact that the batter “pops over” the baking molds when they are baking. 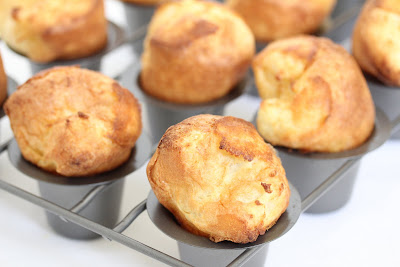 Place the cubed butter in each mold in the popover pans. Place the pans in a 375°F oven until the butter is melted. It should only take about two minutes. Once it’s melted, take the pans out of the oven.

Whisk the eggs and milk in a large bowl. Blend the melted butter into the egg mixture and then stir in the flour and salt. Mix until combined, but there should be some small lumps.

Pour the batter into the molds about 1/2 way with the batter and place the pan in the oven. For large popovers, the bake time is about 45 minutes, and the small ones are done in about 30 minutes. They should be puffed, and the popover tops should be golden brown when they’re done.

I previously bought this Popover Pan*. It’s been working great, except that it only makes six. This is fine if I’m just baking for me and the BF.

But usually, when I make popovers, I have more people over. Since popovers need to bake for about 40 minutes, it’s a problem not being able to make more than 6. Rather than buy a regular popover pan, this time, I purchased this Mini Popover Pan* that bakes 12. These popovers aren’t really mini. They are still pretty big, and I think they are really the perfect serving size.

With this recipe, I was able to make 12 smaller ones and six regular popovers. Of course, if you don’t have a popover pan, you could use a standard muffin tin, but they won’t pop up nearly as much or look as pretty.

Don’t open the oven while they are baking because it can cause them to collapse. They won’t be as tall or airy.

You can add mix-ins to the batter, but don’t add too many because you don’t want the batter to be too heavy. Things like shredded cheese, chopped fresh herbs like thyme, parsley, rosemary, or dried herbs work well.

You can mix the batter by hand, or I’ve seen recipes that use a blender.

I like these best when they’re warm from the oven, but leftover popovers will keep at room temperature for a few days.

These popovers came out very light and airy. They were airier than the previous popovers I made. 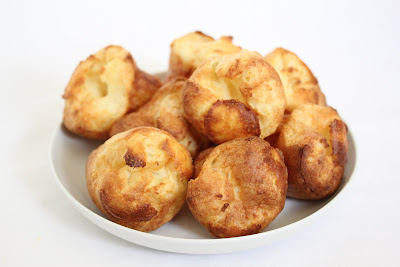 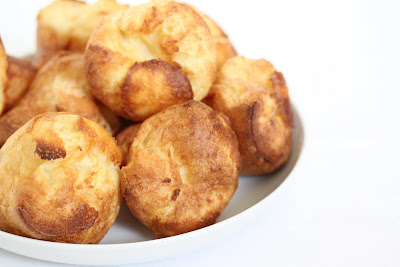 Recipe adapted from a recipe found on Umami Girl who adapted it from Gourmet Magazine.

Did you make this recipe?I'd love to see it! Mention @KirbieCravings and tag #kirbiecravings!
Posted in: Appetizers & Side Dishes, Bread, Breakfast foods, Recipes
8 Comments // Leave a Comment »