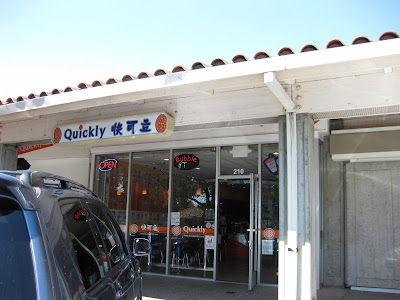 During my visit home, Boyfriend came along with me since we were attending my friend's wedding.  I took him to the DeAnza Flea Market, a humongous flea market that takes place only once a month.  I told him how big it was, but that still didn't prepare him by just how large this flea market is.  Afterward, we were quite tired and thirsty.  We passed by Quickly and Boyfriend wanted a drink. Quickly is a large Tapioca tea place that has locations all over the world.
I was hesitant at first. A Quickly location had originally opened up on another part of Stevens Creek Blvd a few years ago.  After absolutely horrible, horrible customer service, I vowed to never go back.  Baby Brother said that this was the same Quickly's only in a new location.  It's been a few years, so I thought that perhaps things had changed.
Boyfriend was very overwhelmed by the menu at Quickly.  I'd forgotten how extensive it is. 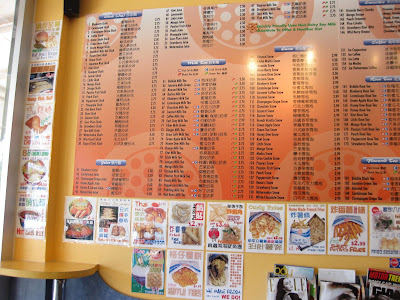 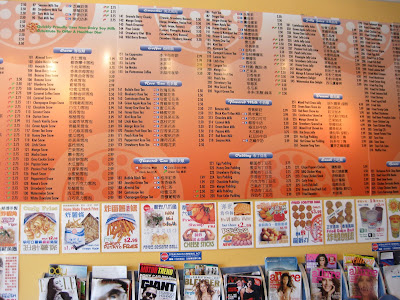 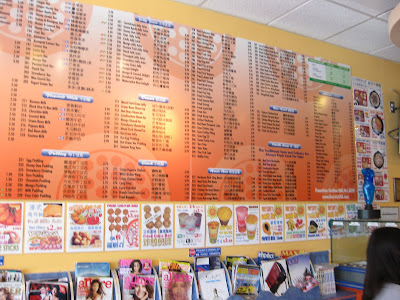 After browsing the menu for a long while, Boyfriend decided on a mango slush.  I decided on a coconut and mango delight, one of the summer specials.  I placed the order for our drinks and then we sat down to wait.

It was pretty early in the day and there were barely any customers.  And we only ordered two drinks.  But we continued to wait for a very long time.  Boyfriend commented that he thought this place should be "quick" since they are called Quickly's.  After waiting around for a while, the person who had taken my order called me up to the front.  She asked if I had ordered a mango delight or a coconut mango delight.  I told her that I ordered the coconut mango delight.  She said she thought that is what I ordered but that she had only charged me for a mango delight and that I owed her another 50 cents.  I was slightly annoyed.  It was her error after all.  But by then, I really just wanted to get out of there because my Baby brother and my puppy were waiting outside and my puppy looked quite tired and thirsty.  As I dug out 50 cents, I asked if I could have a small cup of water. The lady told me it was 25 cents.  25 cents for a small cup of water?? After I just purchased two drinks? I thought it was just ridiculous.

Then, we continued to wait for our drinks.  We waited nearly 25 minutes before they were finally ready. 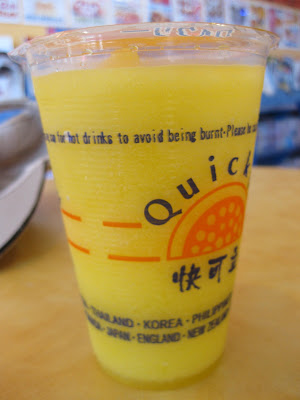 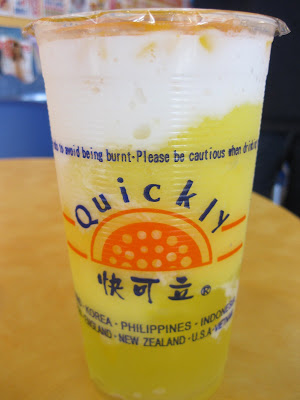 The mango slush was just okay.  Nothing special.  The coconut mango delight did not taste good.  I don't know what the base drink was.  It was yellow in color and had jellies, but it didn't taste like mango or any other kind of juice.  The top was filled with mango jellies and coconut cream, which was the only part of the drink I enjoyed.  After such a long wait, it was definitely not worth it.  And there were no apologies for the long wait either.

So, the customer service definitely has not improved.  My previous customer service experiences had been much worse. They ranged from not honoring the advertise price, adding in all these extra costs, and the kicker of it all (which is when I vowed to never return) was a result of an exploding egg they had microwaved too long which resulted in absolutely no compensation or apologies.

Hopefully I'll remember this next time someone wants to pay this place a visit.