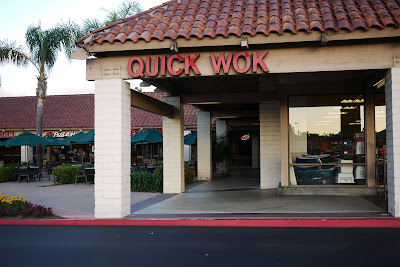 Quik Wok is a fast food American Chinese restaurant located in Rancho Bernardo. In addition, on weekends, they offer some traditional chinese dishes, including chinese breakfast items, noodle dishes, and my beloved knife shaved noodles (homemade noodles that are shaved with a knife, creating doughy noodle threads of irregular shape that have a chewy, bouncy texture).

I had received several recommendation to go check out Quik Wok but the out-of-the-way location and a not so great experience by Kirk of  mmm-yoso, left me hesitant to check it out.

When we arrived, we saw the wide open kitchen, where you can see the chefs on their woks cooking and clanking away. A lot of people on yelp that have ordered from the chinese menu talk about it being a secret menu. Actually, the menu is taped to the front of the restaurant along with the English menu offerings. Unfortunately, no translations are offered for the chinese menu.

The chinese menu is offered on weekends only, served until 3 pm. We actually arrived after 3, but they agreed to let us order from it, to my great relief.

We were really only there for one thing: the knife shaved noodles.

Two people from our party ordered the beef noodle soup with knife shaved noodles. Given the very poor beef noodle soup offerings I’ve tasted in San Diego, I wasn’t expecting much from this. But I was pleasantly surprised. The broth had a nice beef flavor to it and it was also slightly spicy. While not as rich as some other beef broths I’ve had, it’s definitely one of the better beef broths I’ve had in San Diego.  I’d rank it right behind Chin’s. 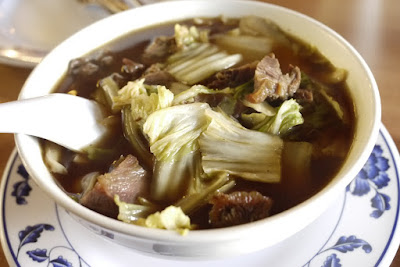 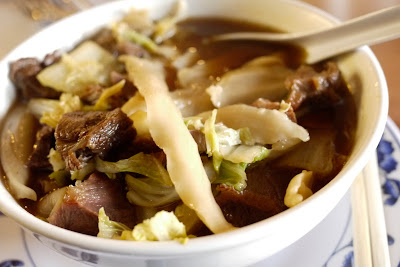 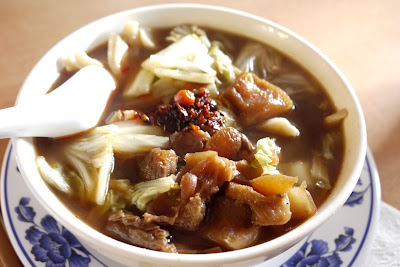 Two other people ordered the “Za Jiang” noodles. Za Jiang is a sauce made of fermented soy beans and usually mixed with some meat and dried bean curd and vegetables. Many people are familiar with the korean version of za jiang which is a black paste. The chinese version is brown, with a sweeter taste. I actually prefer the Korean Za Jiang sauce. I’ve never particularly loved the chinese one. This one got mixed reviews. One person loved the sauce, the other person thought it was too salty. 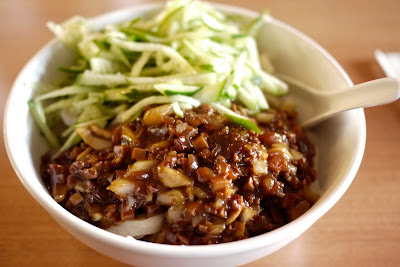 Another person in our group chose to order the pan fried noodles with shrimp. This was actually from the English menu. She liked her noodles. They were thin, crispy egg noodles, topped with shrimp, broccoli, and some other vegetables in a thick sauce. 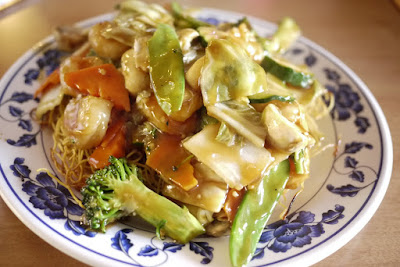 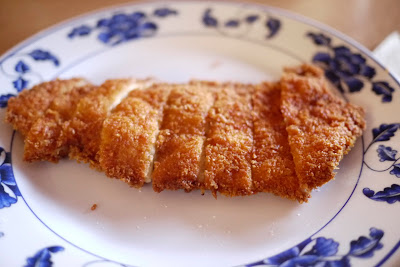 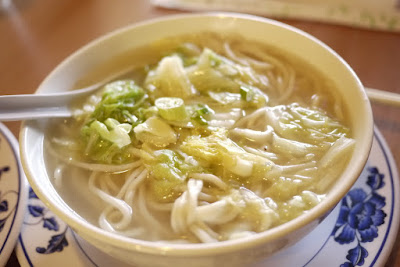 My food was the last to arrive and before it did, I saw the chef come out. My heart immediately sank because I just knew he was coming out to tell me they were out of shaved noodles. Sure enough, I was right. But the chef was very apologetic. He made me the dish with some thicker-type chinese noodles, much like the ones I usually buy and use at home.

I ordered the “Da Lu” noodles, which is a thick noodle stew soup. The soup is heavily laced with cornstarch to develop a stew-like texture. It’s usually topped with a variety of mixed ingredients and then finished with a scrambled egg (which when poured into a soup creates egg drop soup rather than the breakfast scrambled eggs). This actually looked better than it appears in my picture. I was having some lighting issues with all my pictures for this place because we were at a big table that was in a dark corner. 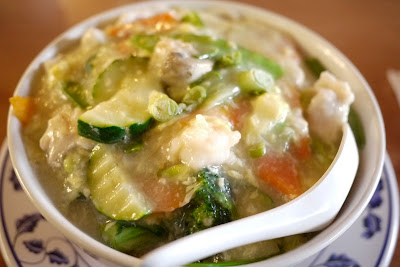 I found this version to be hearty and comforting which is supposed to be the effect of “Da Lu” noodles. I was sad there were no knife shaved noodles, but the fiance was generous enough to let me have a lot of his.

Here is the chinese menu. 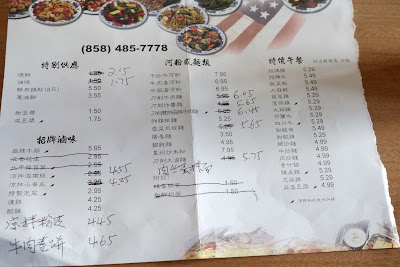