RB Sushi (All You Can Eat) 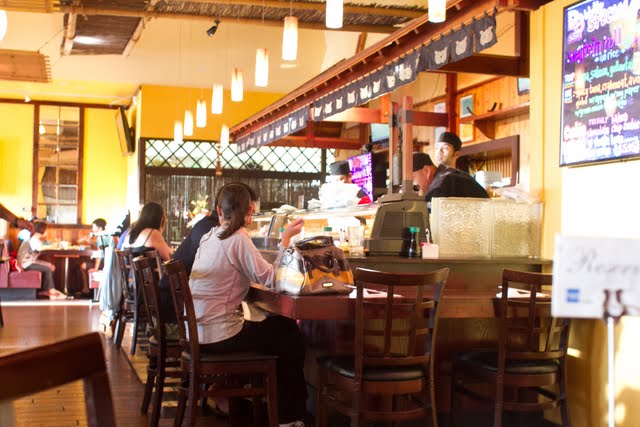 We celebrated my sister’s birthday last weekend, which could only mean one thing: time for another round of all you can eat sushi!

I’m not a huge fan of AYCE sushi. The quality tends to be so-so, orders are forgotten, and I don’t like having to stuff myself with rice. But my siblings love it, and every birthday dinner is usually a request for AYCE sushi. It’s become a competition and they keep track of who has eaten the most pieces.

Luckily, there seems to be new AYCE places popping up all the time, so we don’t have to keep going to the same ones. This time around we decided to check out RB Sushi in Rancho Bernardo. Dinner is only $24.95 for the AYCE, which is a little bit cheaper than most places. They offer a pretty large menu including items like uni (limit one order per person). Best of all, there also was no time limit and though the menu sheet says three rounds, they told us they would not limit us to three rounds. They also did not require us to sit at the bar. 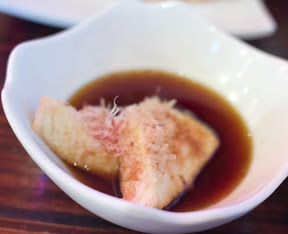 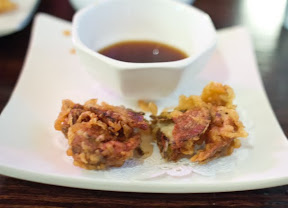 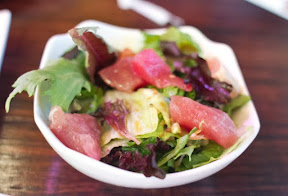 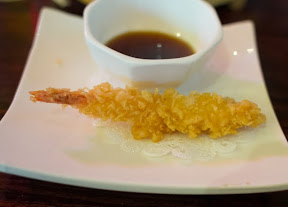 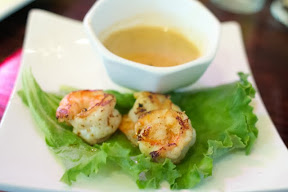 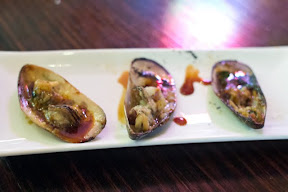 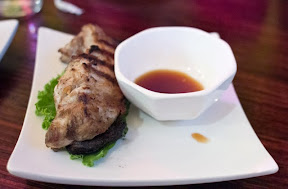 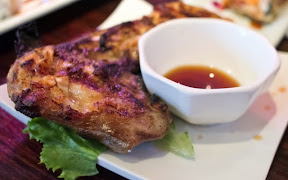 We tried out some of the appetizers (which are served as half orders for AYCE), but most of them were pretty bad. The shrimp tempura was hard, the agedashi tofu bleh. The only one I liked was the deep fried soft shell crab and the salmon kalma. 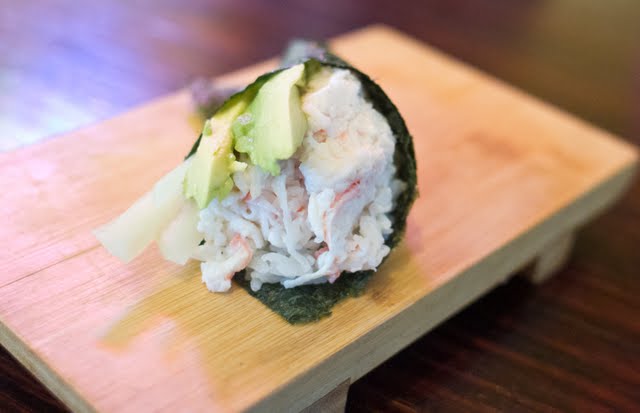 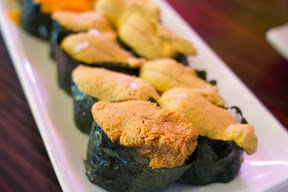 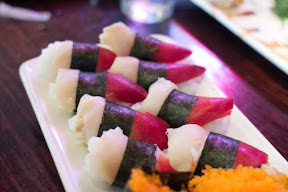 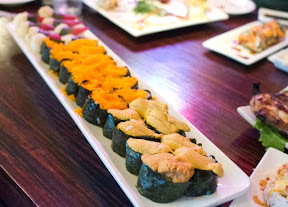 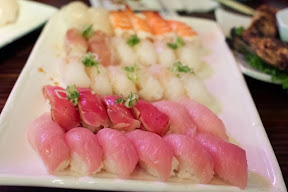 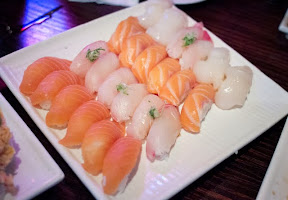 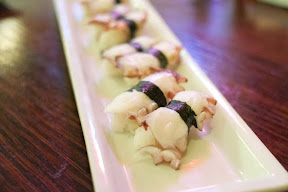 The nigiri was okay fish quality. However the surf clams were not properly cleaned and full of sand. The thing I disliked the most though was the sushi rice which was too sweet. It reminded me of adding sugar to water.

Most of the specialty rolls on the regular menu were offered on the AYCE menu which is nice, except for the fact that rolls are so filling. Someone in our group made the mistake of ordering too many specialty rolls, which he couldn’t finish. This greatly affected how much we were able to consume because we had to help him finish. 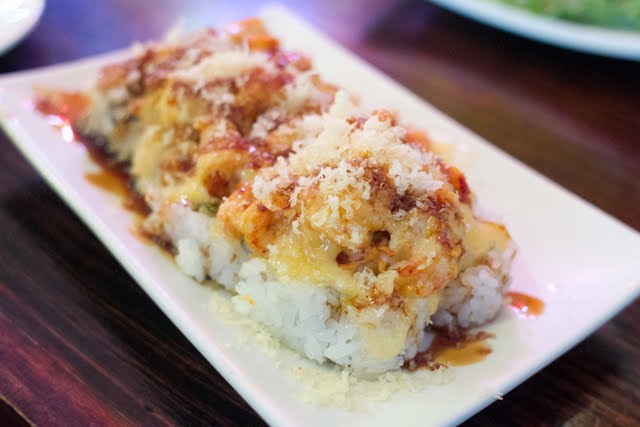 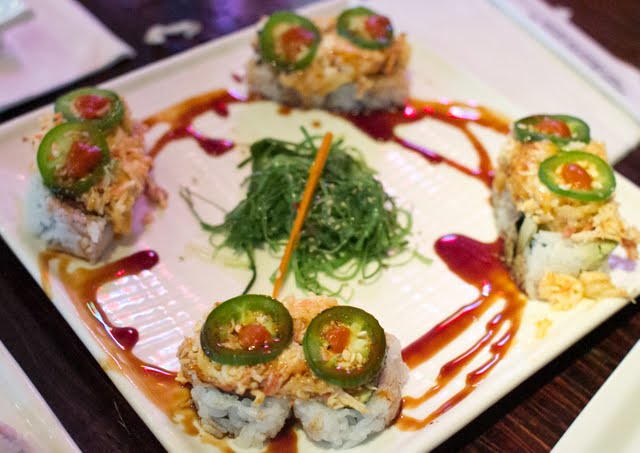 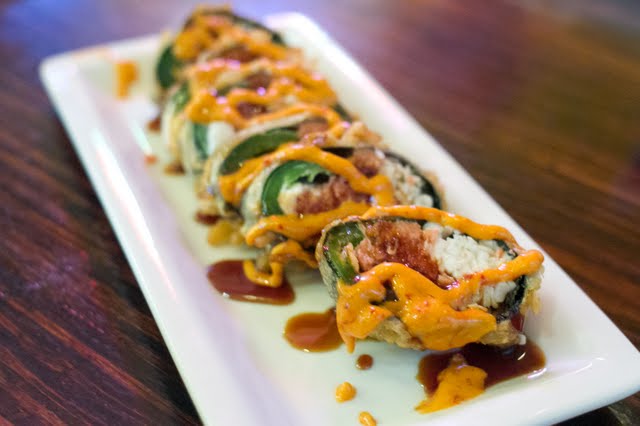 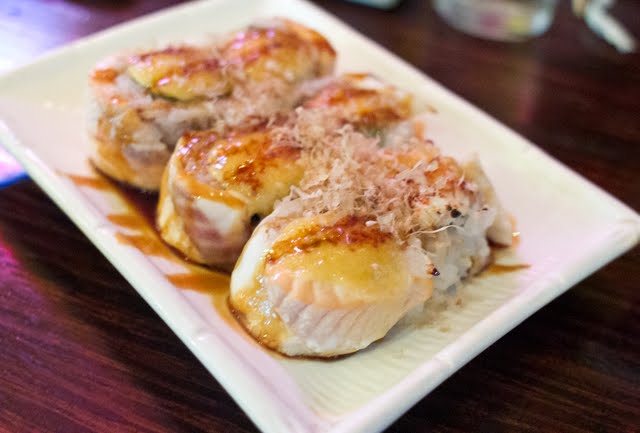 I don’t remember what rolls these were. They actually got almost our entire first order right, missing only our octopus and one order of uni. Other places we’ve tried usually mess up a much bigger portion of the order and forget almost half the items.

Like most AYCE places, RB does charge for any leftover food. They kept reminding us of this throughout the night. And they asked several times if we would be finishing the rice. They basically held the missing food from our first round hostage until we had cleared the table and polished off the rice. We found this a little annoying. Since they were going to charge us if we didn’t finish, I don’t know why they were so concerned about whether we finished or not. And I didn’t like that they kept putting off giving us the stuff missing from our first order until we finished every bite on our table.

Overall, we had mixed feelings about this place. There is a large variety, more relaxed rules, and cheaper prices compared to other AYCE sushi places we’ve been to. On the other hand, some of the food quality was worse such as the appetizers and the unclean clams and the constant asking us about finishing the rice and refusing to give us the rest of our order was annoying.

We usually eat a lot more sushi, but due to one of my brothers not being there, and one person ordering way too many specialty rolls, this was our worst showing ever at an AYCE place. I haven’t quite yet decided if we will return.