I know Mother’s Day is traditionally celebrated with a brunch, but we did a dinner celebration instead. My mom is far away in the Bay Area, so instead we drove to Future Husband’s (FH) parents’ place to celebrate Mother’s Day with his mom.

FH and his brother had suggested Mimi’s Cafe for dinner because they both claimed it was their mom’s favorite place. Once we arrived, future MIL did not want to go there. They were so confused. It turns out she doesn’t like Mimi’s at all…

We sat around for a while while she decided on a place. I had time to check out her flower garden and play with the adorable dog. Finally off we went to Red Lobster. 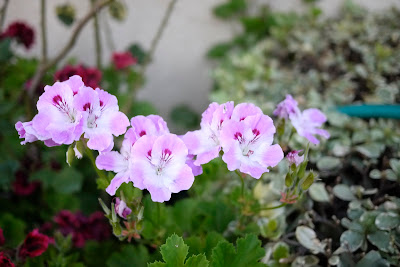 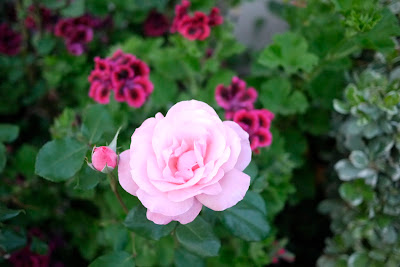 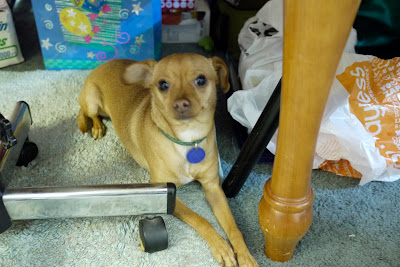 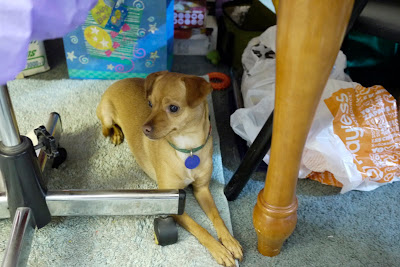 I haven’t been to Red Lobster in a really long time so I was actually looking forward to it. They are currently offering several grilled lobster tail platters and shrimp specials. While we waited for a table, we watched the employee take out a lobster for a little boy who really wanted to touch one. Once it was out of the tank, the boy was too afraid to touch it. After it went back in, the boy waved bye to it and said “Goodbye Crab!” 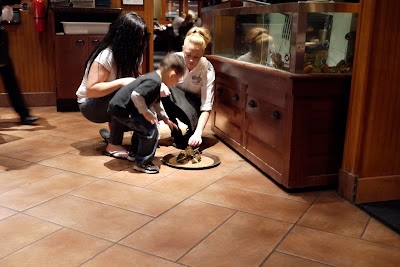 After ordering our food, we got our salads, which come with each entree. I had a Caesar salad. 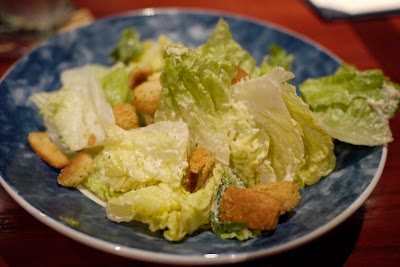 Then we got our bread. I usually love the cheese biscuits at Red Lobster and was very much looking forward to this basket of bread. But when I tasted one, something was off. It was too dry and flaky. And the inside was too salty and oily. I was wondering if the biscuits had always tasted like this and maybe I had just outgrown them. But everyone at the table agreed that they were not as good as they used to be. 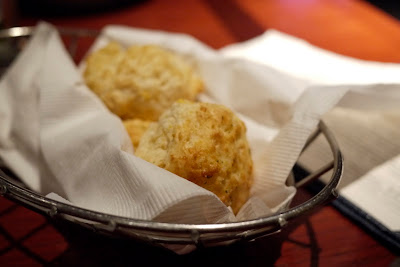 It’s probably the only time I’ve dined at Red Lobster where there were still biscuits left in the basket.

Then our food arrived. Everyone was nice enough to wait and let me take a picture. 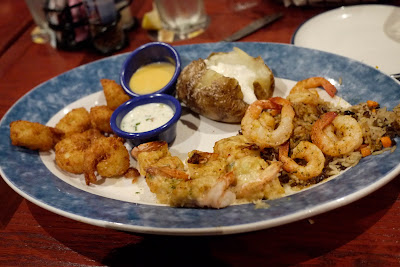 I liked the potato crusted shrimp. It was like a fried mashed potato ball with shrimp inside. 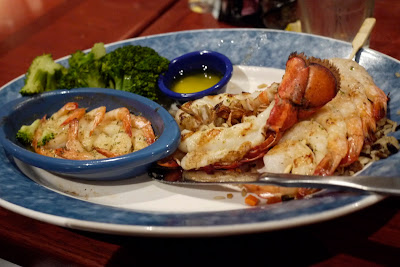 Future BIL ordered the steak and lobster combination. I was impressed with the size of the steak. He seemed to give away endless chunks and still have a lot left. 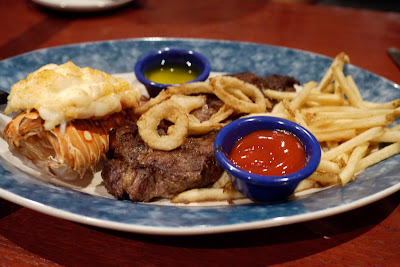 BIL’s girlfriend ordered a plate of King Crab legs. Unfortunately they don’t cut the crab legs in half like I’ve seen at some buffet places. It was a lot of work for her to get the meat out.

The other member of our party ordered the Admiral’s feast, which is a platter full of fried seafood bits. 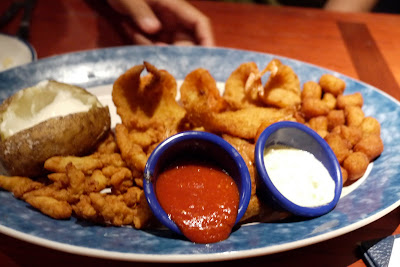 Finally, I ordered the wood grilled trio of lobster tail, shrimp and scallops. As you can see, my plate looked much smaller than everyone else’s serving plate. To make things worse, I had asked for a substitution of fries instead of the rice pilaf, and the fries were completely buried under the grilled seafood causing them to be soggy and drenched in oil. 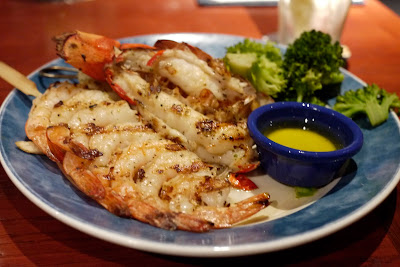 I was pretty annoyed. Obviously I had really wanted fries or else I wouldn’t have ordered them and it made no sense for them to bury them under all the food. I usually don’t complain or ask for something to be taken back, but in this case, I asked for a new order of fries, which they promptly took care of.

I’ve ordered this combination entree before and enjoyed it. But that night, everything was really salty and I was having problem finishing any of my food. FH thought his food was too salty as well.

Overall, we were all pretty disappointed with our meals. I don’t know it was an off night or it was this particular Red Lobster location.

For dessert, we brought along a Mother’s Day cake which I had picked up from the Nijiya market in San Diego. I loved how cute it is with its heart shape. It is a strawberry mousse cake. There is a chocolate cake layer topped with strawberry mousse. The cake was nice and light and you could taste the strawberries in the mousse. It was quite yummy and definitely the best part of dinner. 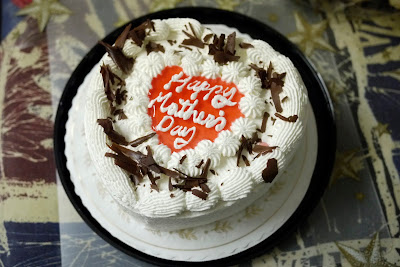 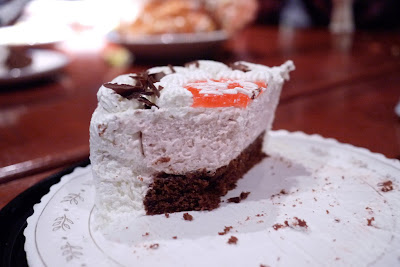 Posted in: American, Restaurants by Location
2 Comments // Leave a Comment »