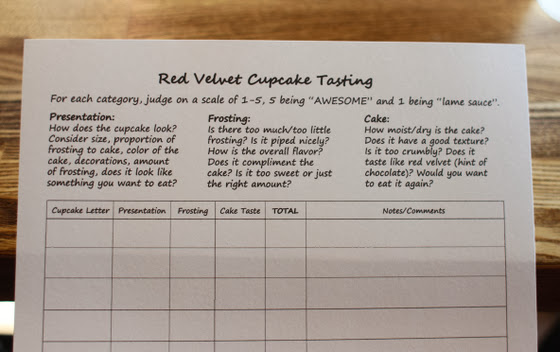 Happy Valentine’s Day! Since it is Valentine’s Day, I thought I’d write about a recent red velvet cupcake tasting I attended with a group of friends, where 13 different cupcakes were tasted to find the best in San Diego. It’s what inspired my red velvet baking madness this week.

Note: I’m going to go on a slight rant here about my day so if you don’t care and just want to read about the red velvet cupcake tasting, skip this. TGIF! And it’s a long weekend (at least for me and Mr. K, hopefully for most of you too), so I’m doubly happy. Thursday was not kind. My blog broke in the morning. It turned out to be a faulty plugin that suddenly crashed the site. It took several hours to figure out and get it up and running. And then several more hours to fix various plugins to get everything working completely. Several people were kind enough to alert me to the problem, which I really appreciated. Some people left some nasty comments because they couldn’t access a certain recipe, which was not fun to read.

After finally getting it all back together, two hours later I clicked on my site to find a whole new mess of errors! This time it was a host problem, which also took another few hours of waiting around while the host fixed the problem. I am now very wary of another breakdown but I hope that is the end of it. Okay, end of rant.

She came very prepared, with cupcake stands and detailed score sheets. We tasted the cupcakes blind and the results were quite surprising. 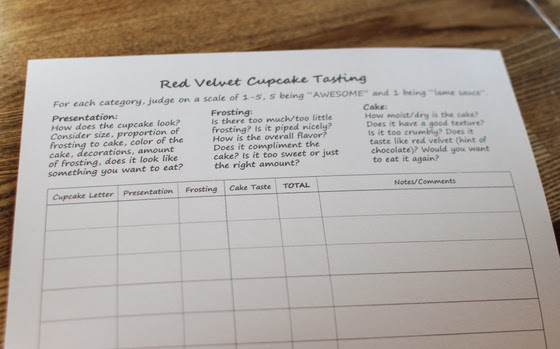 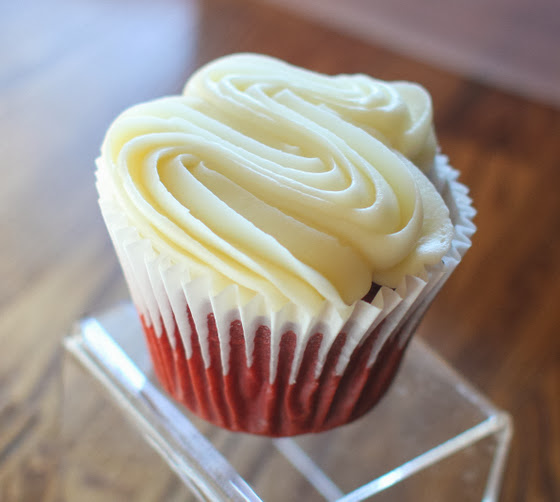 I’ve enjoyed the cupcakes at Yummy Cupcakes so I’m not surprised that I liked this one as well. It actually tasted a lot like the Sprinkles version which I also like. This one ended up placing Fifth overall, which I think was about right. It wasn’t my top one but it was ranked pretty high for my personal list. It has a pretty standard red velvet flavor and the icing is your typical cream cheese icing. 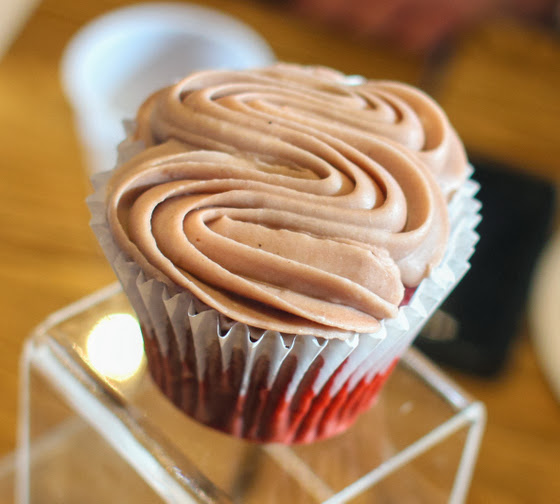 Yummy Cupcakes also offers another red velvet with a cocoa frosting. I’ve never really enjoyed cream cheese frosting–I find it way too sweet. So I thought the cocoa would be a welcome change. Surprisingly though, tasting this one just made me appreciate why people feel the need to eat cream cheese frosting with their red velvet cake. It is a much better pairing than the cocoa frosting with red velvet. Most of the group seemed to agree as this placed 7th overall. 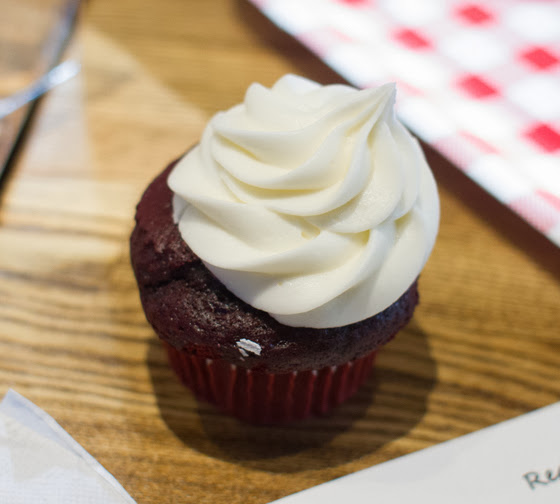 This cake had a nice swirl frosting that was also lighter than the typical cream cheese frosting. I don’t have a copy of my notes and I’m afraid I can’t quite remember what I felt about this one, but it ended up placing 9th overall. 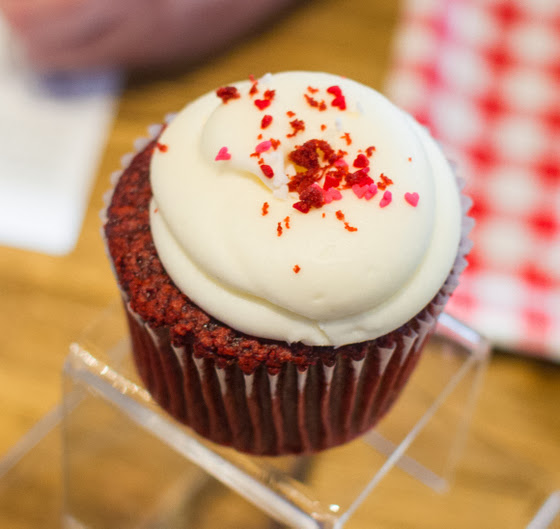 I was enchanted with the tiny heart sprinkles. The cupcake was moist and had a good balance of buttermilk and cocoa. The frosting was interesting. It tasted like they added a savory cheese, maybe goat cheese? I wasn’t quite sure how I felt about it. It was light and not too sweet, but  a little strange. It ranked 2nd overall. 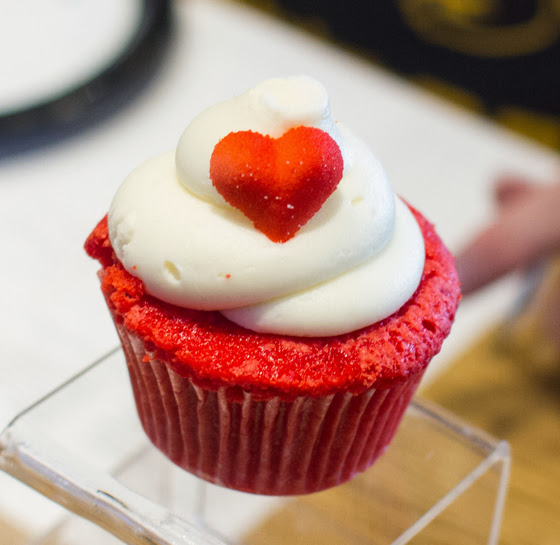 I was immediately put off by the color of this cupcake which are more of a neon pink than red. It just looked so fake and not at all appetizing. The appearance, unfortunately, was a foreshadowing of the taste. It tasted like chemicals and not at all like red velvet. This was definitely in my bottom group and it was ranked 8th overall. I’ve had good experiences with Elizabethan Desserts, so I was surprised by the reveal. 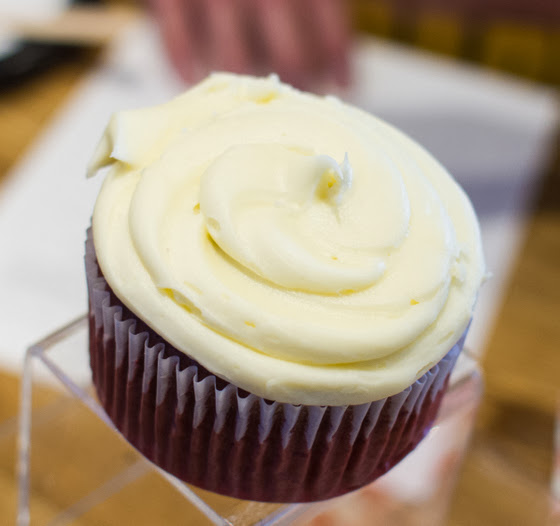 I didn’t think it could get worse than Elizabethan Desserts and then we had this one. This had a very weird aftertaste. It was like a medicinal butterscotch flavor. Such a shame as this was a big cupcake. It placed last overall. 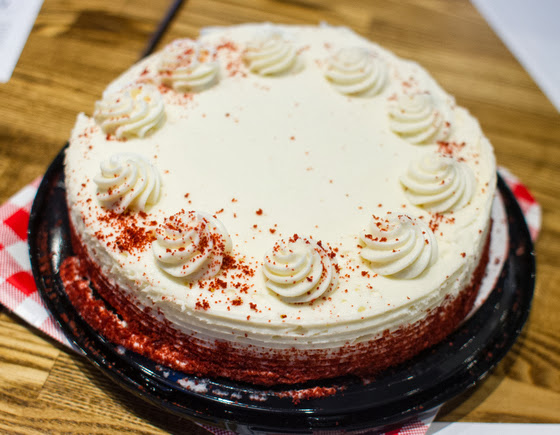 This was a last minute replacement for a bakery that didn’t exist anymore. As one might expect, it was not very good. A below average red velvet cake of your stereotypical grocery store quality. It placed 10th overall. 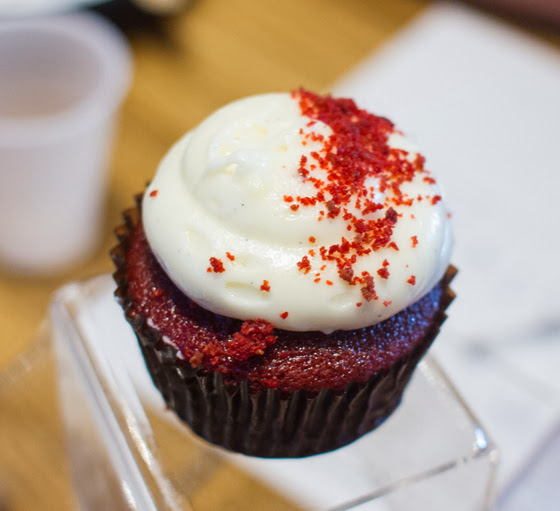 This was one of my top two. I was surprised because the presentation was a little weak, with the frosting already slightly melted. The cake was what I look for in a red velvet and the frosting wasn’t overly sweet. It ranked 3rd overall. 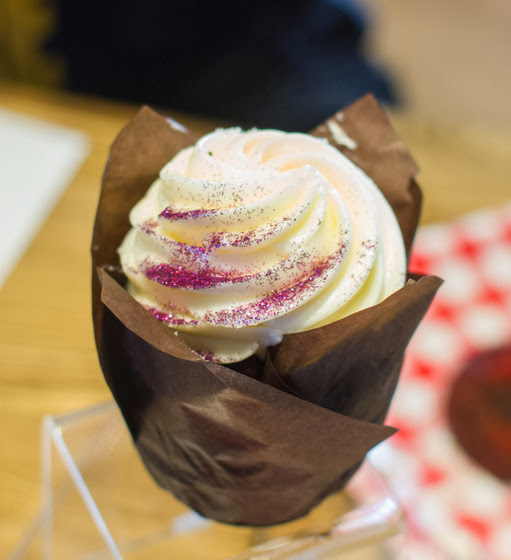 People oohed and ahhed over this one with all the glitter. I thought it was a little strange to have purple glitter. The cupcake was quite heavy and dense. I felt the cocoa flavor was too strong. This only ranked in the middle for me but it placed first overall for the group. 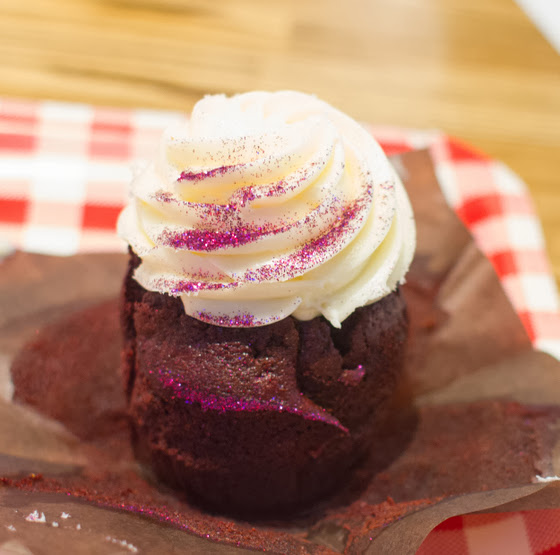 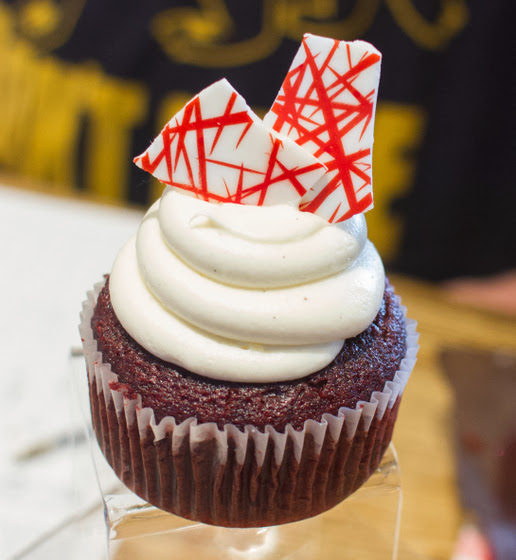 I thought this one had the prettiest presentation. The cake was moist and light, but a little too light on the cocoa flavor for me. I would have liked a tad more. This one tied for 2nd along with Love Cupcake Cafe.

At this point, I had to leave early. *Sob* I guess I didn’t miss out on too much. I have already had the Sprinkles (6th overall. I think it would have been in my top 5) one many times and Babycakes once (4th overall). I hadn’t had the Bread & Cie one which surprisingly was very much hated (2nd to last).