Last week, the BF and I got to dine with Rosa of The Catty Critic, her husband, and her fellow LA food blogger friends, Kristen of Rock My Palate and Mark and Angela of I Flip For Food, at the pop up Relate Restaurant headed by Chef Dan Moody.

“Pop-up” restaurants is a concept that arguably has been made most popular by Chef Ludo Lefebvre. The idea is that for a limited time, a chef will temporarily take over a venue and turn it into his own kitchen/restaurant. The concept allows a chef to experiment with his cooking without dealing with the overhead costs of having to maintain a physical restaurant space.

Chef Ludo became quite popular after being featured on the tv show Top Chef Masters. He has successfully done six versions of his “LudoBites” pop up restaurants, popping up in all different parts of LA. His last venture, LudoBites 6.0, was so popular that despite teaming with opentable to handle the reservations, opentable’s site completely crashed as thousands of food lovers attempted to get a reservation. Apparently the site received 35,000 hits in a very short amount of time, and all the reservations were filled up within 90 minutes for the 6 week stint. BF and I were one of the many unlucky ones that did not get a table.

A few months ago, I heard a pop-up restaurant would be coming to San Diego, set up to temporarily take over St. German Cafe in Encinitas. I became even more intrigued when I learned that the Chef Dan Moody, who is also known as the Relation Chef,  had been a sous chef for Chef Ludo at his last three LudoBite incarnations.

After Rosa invited me to join her and her food blogger friends, my mind was made up, and I decided I had to give it a try.

The menu at pop up restaurants usually change from day to day as the chef continues to experiment with new ideas. The menu for the night was as follows: 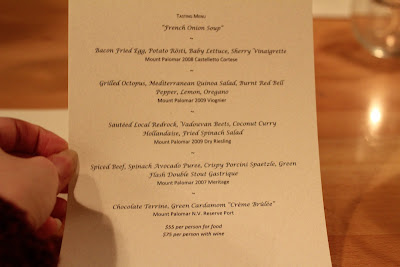 Our first bite was the French onion soup. A little small piece of fried dough sat upon a spoon. Upon popping it into my mouth, I was greeted with a squirt of hot onion soup. I found the little bite quite playful and wished there was more. I’ve never had french onion soup presented this way and it was a fun way to open the meal. 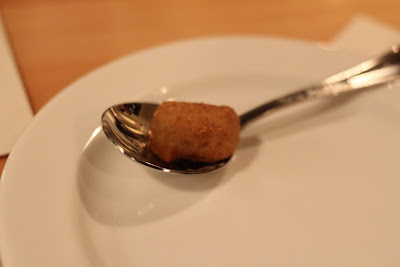 For each course, the waiters waited until everyone was finished, simultaneously removing all of our plates and presenting us with new plates and new silverware for every course. I thought this was a nice touch.

Our second course was Chef Dan’s take on breakfast. This was probably the most popular dish among the table that night. The breaded and fried ball was an egg. When I cut into it, I discovered a runny yolk. I wasn’t always a fan of runny yolks, but BF’s love for it has rubbed onto me. Now I love the taste of a runny egg yolk. Bits of fried bacon also graced the plate and there was a potato pancake and lettuce. 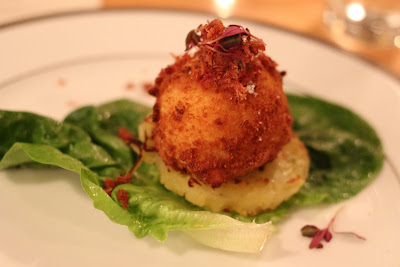 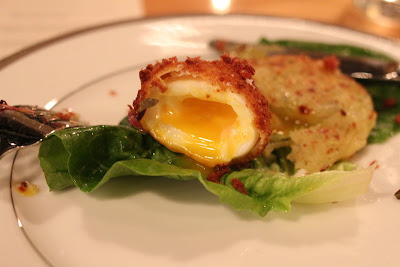 Our next dish was a grilled octopus. I love octopus and the preparation of this dish was really delicious. The octopus was extremely tender and had a great smokey flavor. Later on Chef Dan told us the process to get the octopus so tender since octopus usually has a very chewy texture. I actually love the chewy texture, but I also appreciated the complicated process to make it tender. 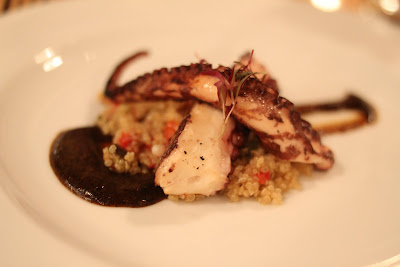 The next dish was a redrock fish, served with a puree of beets, a coconut curry and fried spinach. I’m not a big fan of beets, so I could have done without the beet sauce. I liked the crisp seared skin of the fish and the fried spinach leaves were tasty. 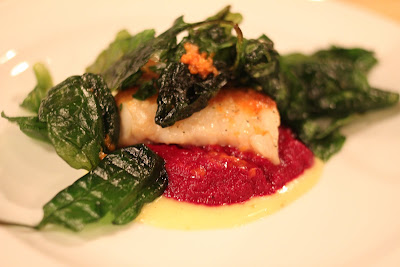 The next dish was a spiced beef, with avocado puree, and crispy porcini. This was my favorite dish of the night. The meat was cooked and seasoned perfectly. 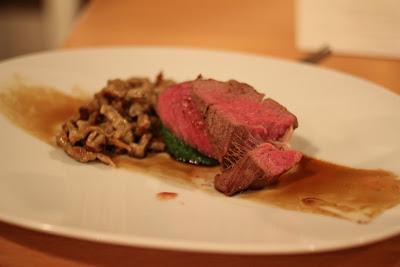 The final dish was supposed to be a creme brulee dessert, which we didn’t actually get to try. But we got something even better. It was Angela’s birthday, and so Kristen had asked Chef Dan to make a cake, which he agreed to do. I thought this was a fabulous idea. It must almost every foodie girl’s dream to have a special personal birthday cake made by a chef.

He made a enormous chocolate mousse cake. I should have stood up to get a better picture. Each of us had a small slice of the extremely rich and decadent cake. And after all those slices, more than half the cake remained. 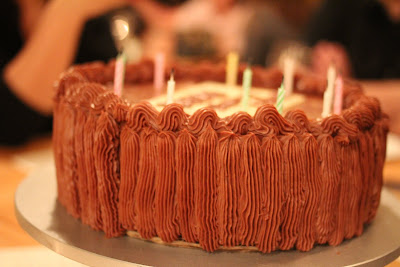 The cake was made with a bittersweet chocolate, which kept the dessert from being too sweet. The chocolate mousse made the cake nice and moist. It was topped with a cognac buttercream frosting. Normally I’m not a frosting girl, but this frosting was so utterly light. I ate all my frosting, all the while suspecting that it was probably made with a lot of butter, later confirmed by the chef. 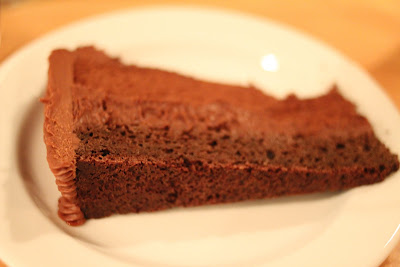 Because we were the last patrons left that night, we got a chance to hang out and chat with Chef Dan after. It was fun listening to how he prepared his dishes and his experience so far opening his first pop up.

Despite the rainy conditions, I had a wonderful meal and enjoyed hanging out with fellow food bloggers. Hopefully Chef Dan will be back in San Diego again soon.