Over the weekend, we attended the San Diego County Fair, which is in town until July 4. I always look forward to visiting the fair at least once and my main focus is always the food. 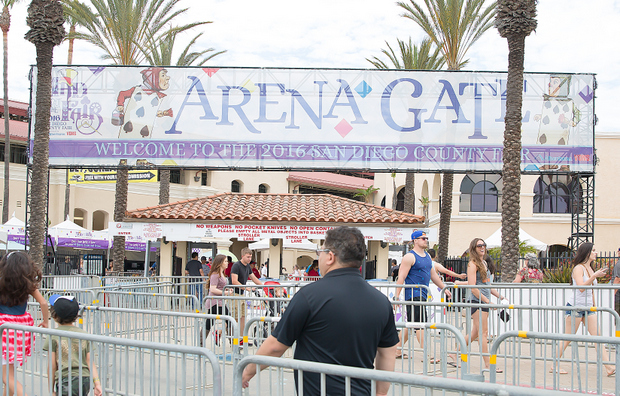 This year’s theme is Mad About The Fair, inspired by Alice’s Adventures in Wonderland. 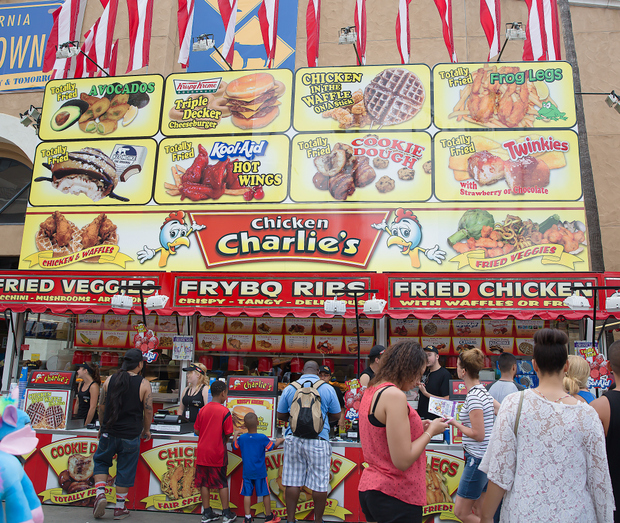 Our first stop every year is Chicken Charlie’s. They always have some crazy new food item to introduce and this year they debuted two new items to add to their already massive menu: Chicken & Waffle on a Stick and Kool-Aid Hot Wings. 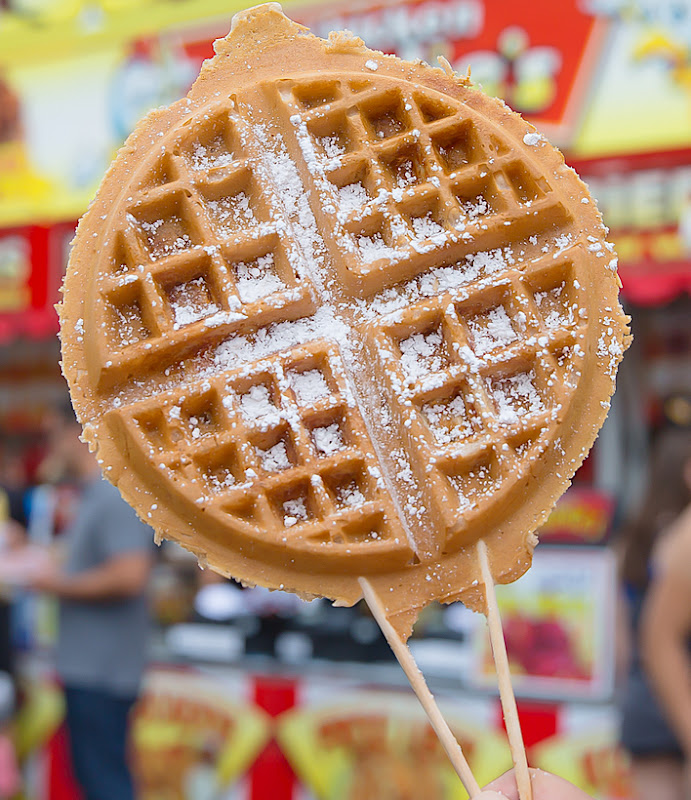 We decided to try out the Chicken & Waffle on a Stick. The fried chicken is baked right into the waffle, making it feasible to carry on some sticks. Still, it’s a pretty delicate hold and we ended up cutting this up like traditional chicken and waffles. 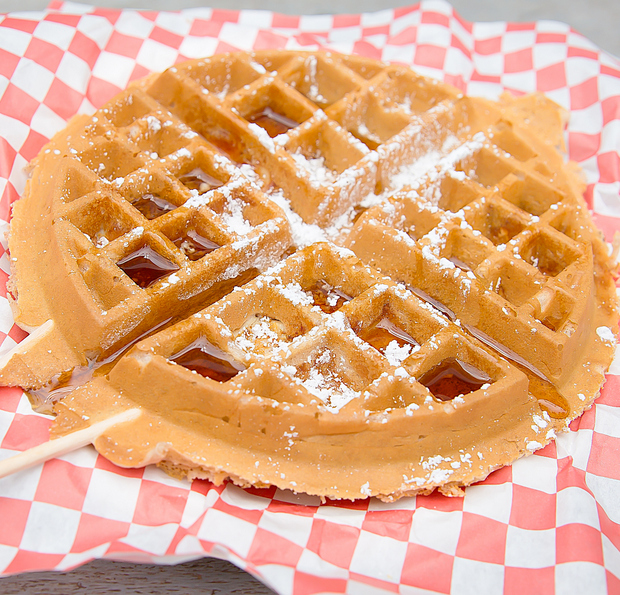 The waffle itself was a little too soft for my liking. I also didn’t like the strong cinnamon flavor. They gave us a container of syrup, which we drizzled all over the waffle. The fried chicken was flavorful though slightly dry. 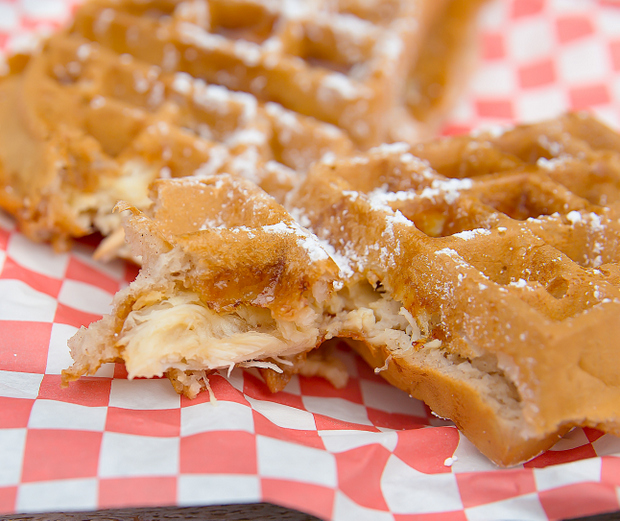 It’s a clever concept, though not one of my favorites from this booth. We were tempted to get one of their other fried creations we enjoy, but we had many more places to check out. 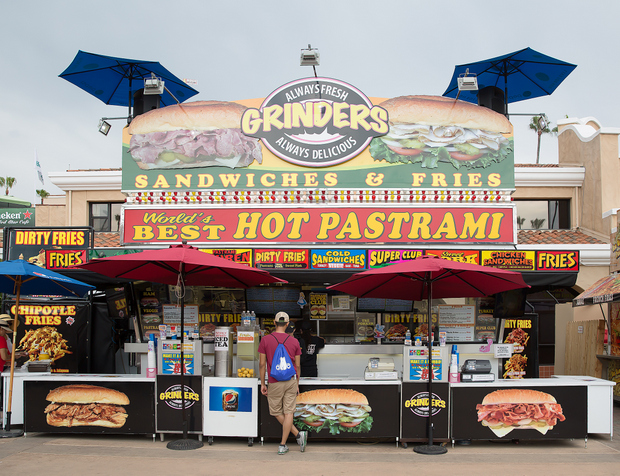 Our next stop was Grinders for their pastrami and cheese topped fries. It’s not a new item, but it’s one I’ve never tried before and I was craving something salty. 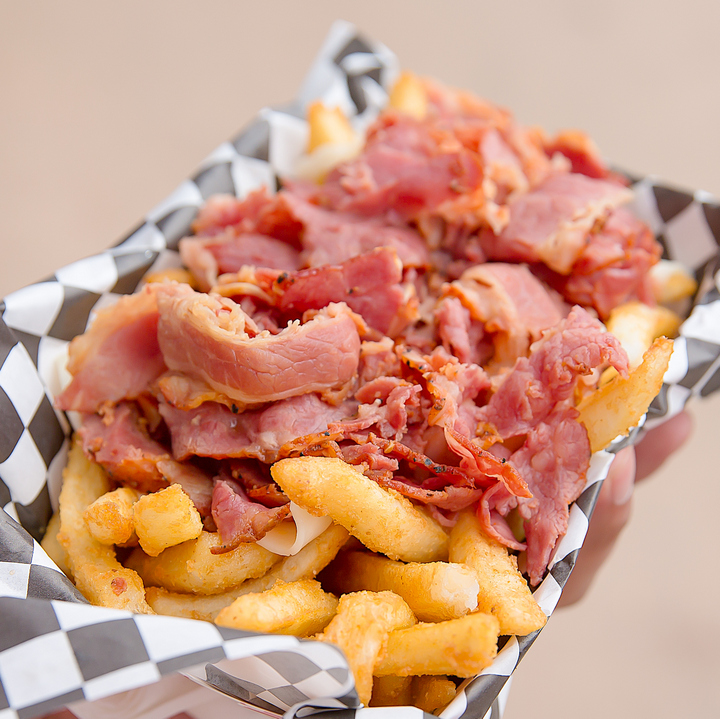 The fries were crunchy, the pastrami plentiful–though a tad too salty. I do wish that the food had been served at a hotter temperature because the cheese never melted. 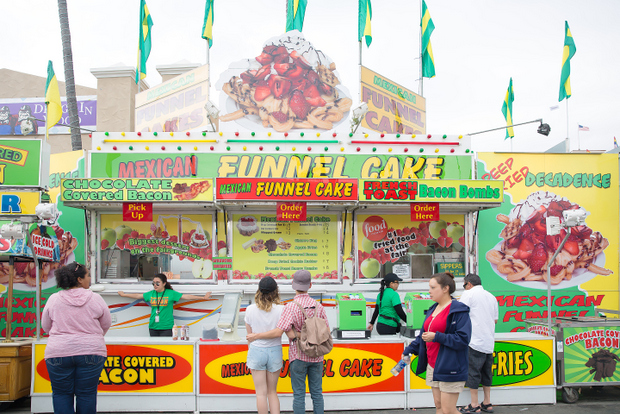 I did really enjoy the churros though. They were light and crisp. 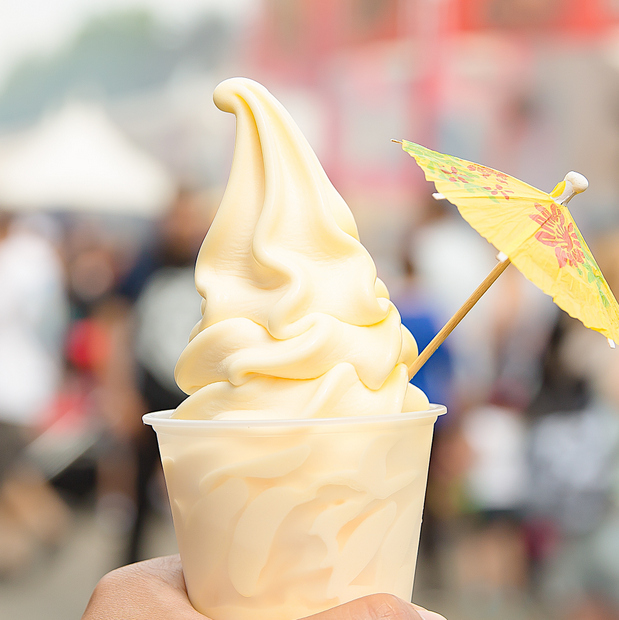 I can never resist Dole Whip so I was very excited that TC Dugan Ice Cream was offering it as their new item this year. How has Dole Whip not been at the fair before? It was pretty hot over the weekend, so this really hit the spot. It’s not quite as pineapple-y or as yellow as the one served at Disneyland, but that seems to generally be the case when I get Dole Whip elsewhere. 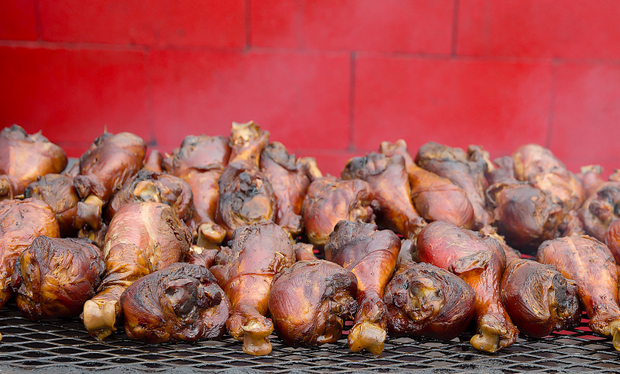 One of the items I look forward to the most every year at the fair are the turkey legs. I never tire of the sight of those turkey legs smoking on the grill. There are many booths that sell turkey legs and over the years we’ve tried them all. Generally, we’ve been disappointed. We love the ones at Disneyland but have found the ones at the fair to be either overcooked or undersmoked. 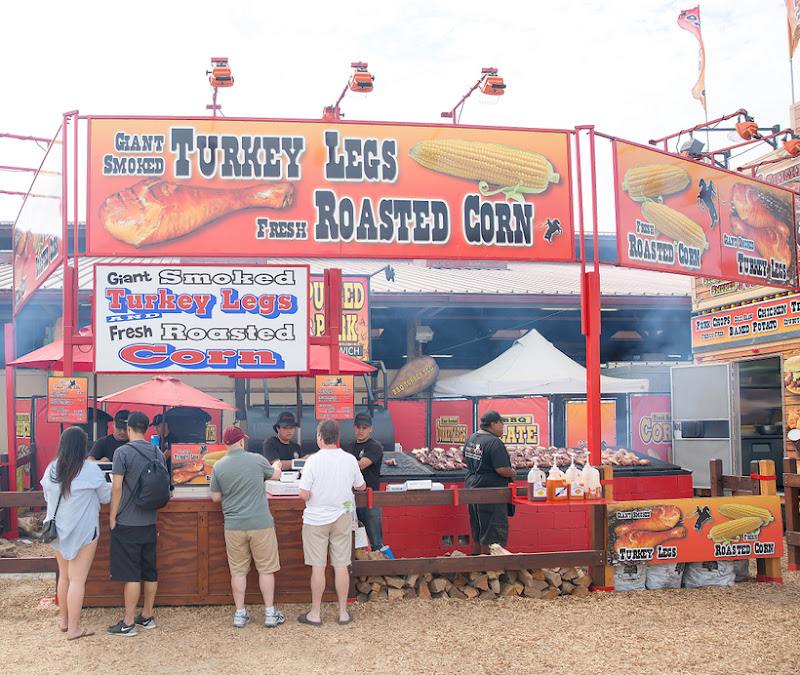 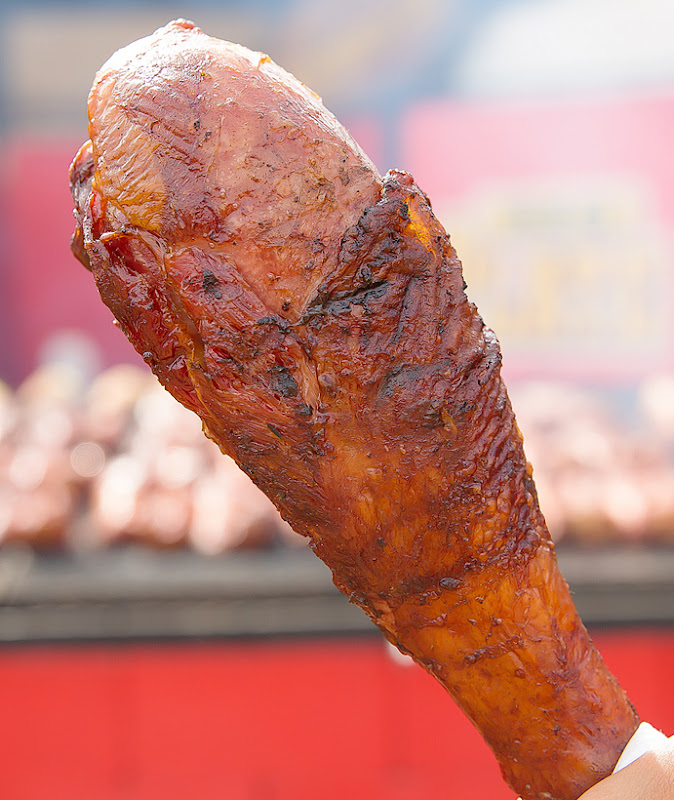 There is only one vendor we like to get our turkey legs from. These guys specialize in turkey legs, offering little else on their menu. However, they can be hard to find. The company seems to change names every few years and often is located in a different section of the fair every year as well. We searched all over for them this year, before finally finding them near Durante Gate. They charge a few dollars more than all the other vendors selling turkey legs, but I think they make the best ones at the fair. A little saltier than I would like, but the meat is moist and smoky all the way down to the bone.

Of course, we did a few non-food things as well, like checking out the animals and the theme exhibit. The Mad About the Fair theme exhibit is a steampunk twist on Alice’s Adventures in Wonderland. I love this long tea table! 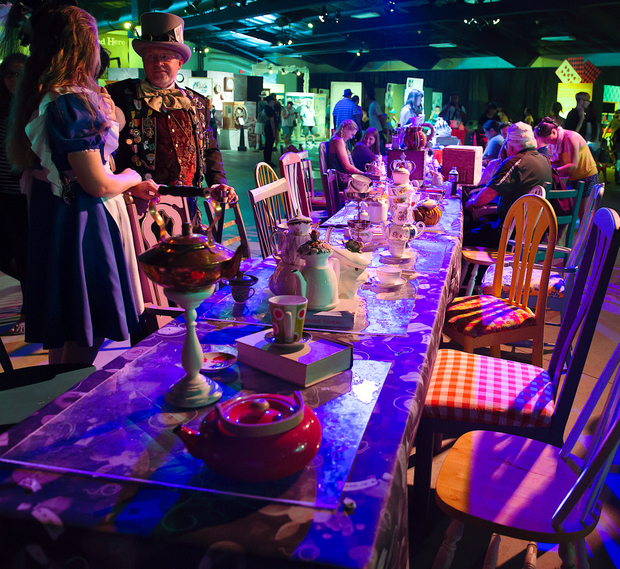 Overall, we had a fun time at the fair. They are around until July 4th if you want to go visit! 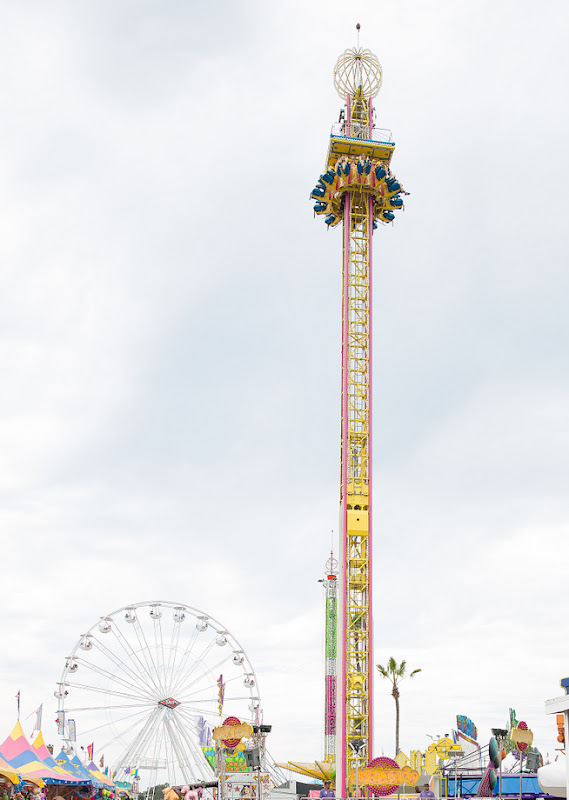